Overview
Reviews
Comparisons
Alternatives
Salesloft is the provider of the leading sales engagement platform that helps sellers and sales teams drive more revenue. The Modern Revenue Workspace™ by Salesloft is the one place for sellers to execute all of their digital selling tasks, communicate with buyers, understand what to do next, and get the coaching and insights they need to win. ...
Close 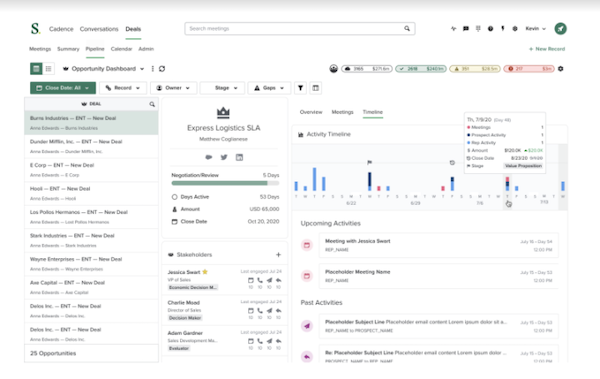 Has made my life a lot easier

Top-rated experience with onboarding the product and using the product. Anytime I reached out to support, they got back to me immediately and helped me resolve my issue.

Salesloft is a great value for the money spent, it is easy to use, and my salesperson and their onboarding team did a great job getting my all set up.

I wish they had more native integrations with CRMs. Salesforce is their primary integration.

Salesloft was easier to use and the email cadence tools are much better in Salesloft.

It's a great pure out bounding tool for larger sales orgs.

From local dialing to organizing cadences and keeping your daily activities organized, this platform is it.

Great product but has issues

Overall Salesloft has made me more efficient and organized at work. Even though we frequently run into issues, I couldn't imagine my job without it.

Salesloft is the main reason I'm still in a sales position. Before the system, I was leaving over 70 of the same voicemails a day and had to manually track my cadence progress which was messy and unorganized. Salesloft has completely transformed my work style for the better and has lead to multiple successes in my career. I am much more efficient, organized, and happy than I was prior to Salesloft.

I'd say Salesloft runs great 75% of the time. The other 25% of the time my co-workers and I frequently run into issues where the system doesn't function properly. The most common issue I run into is when the entire program becomes unresponsive leading me to uninstalling and reinstalling the extension and even then it sometimes doesn't fix it. Another frequent issue I run into is when Salesloft doesn't record or log my calls for the day. I've had calls that were never logged and also calls where it took over a day to show up.

The company made the change, so I don't have a precise answer. I think because SL is definitely better than Outreach