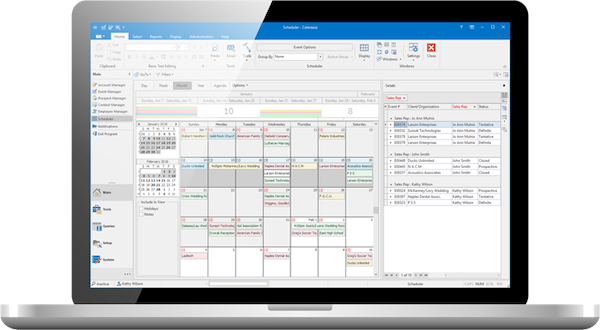 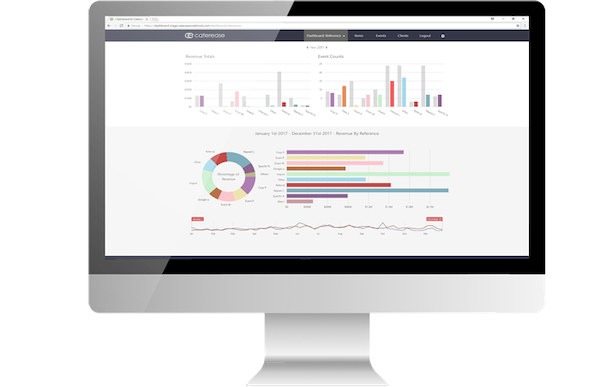 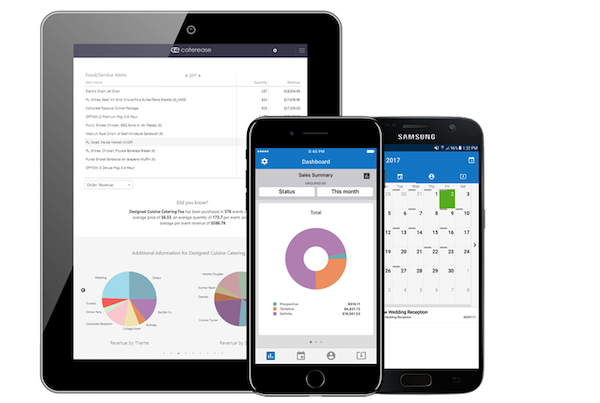 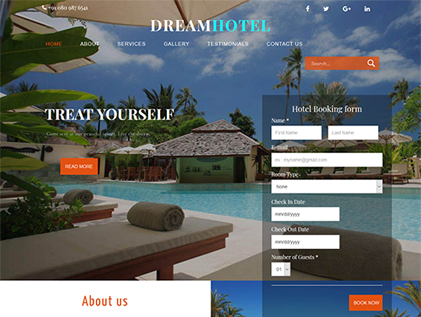 Software has enabled me to double my business without adding extra support staff. It forces me to answer questions about my events ahead of time so when the event date arrives, I am fully prepared.

Well thought out! Software can be customized to do just about anything. It is easy to use - learning curve is approximately 6 weeks to become very comfortable with it. A myriad of reports to choose from and customize. Absolutely the best customer service of any software I've purchased. Very quick and clear response time, Questions are answered within a day. Phone and email support unrivaled. Developer is willing to work with End user.

1. Mouse scroll! I use this program at least 6 hours/day; finding those hiding scroll bars and scrolling is continually frustrating and annoying, especially when the detail grids are expanded. The program looks like Outlook and acts like Outlook with the exception of this feature. 2. Recommendation for data entry: In some places 'tab' gets you to the next column, and in some places it's 'down/up' arrow. Often frustrating to remember which to use. It's a waste of time to use your mouse when the 'tab' would do. I would recommend that this feature be streamlined so it's always either 'tab' or 'arrow' key (mouse still available, of course). 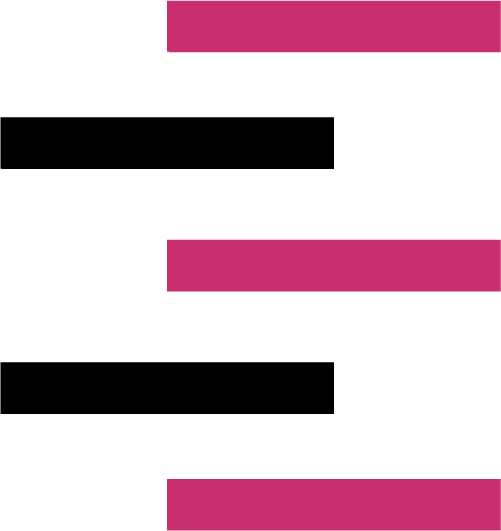 Mary-Louise - thank you for the wonderful review. I just wanted to tell you that you can disable the hidden scrollbar feature in your local preferences window. So sorry for any inconvenience that might have caused you.

The name says it all! Caterease has put the Ease into our Catering Operations

One of the biggest benefits to Caterease is all there integrations. From credit card processing with Vantiv to event staff scheduling and communication with Nowsta to EASY, STRESS FREE online ordering setup through Zuppler, Caterease has centralized multiple outside operations of our catering company into one place. This alone has cut our time it takes to prepare, schedule and collect payment for every event we create in half, if not more. Caterease has boosted our business operations and continues to help in our growth on a daily basis.

The customization of EVERY ASPECT of Caterease is one of the reasons why we love it so much. Everything can be made to suit your individual businesses needs. You can use their basic templates for prints such as contracts, receipts, billing statements and more or create your own with whatever information you would like. Every single bit of information can be displayed or removed from prints. Anything!! You can even customize your screen views. We have 6 different users linked to our Caterease and each users desktop/window views are customized down to the theme color. We have 2 divisions to our catering company, one is rather simple and the other is very complex. We have one user set up for the simple division and have cut out 80% of the features Caterease offers from that users display because we do not use them with that division so now, those features that we use for the complex catering side don't clutter up or confuse our simple home meal delivery user. The reports and query features are amazing. You can pull a report or query for literally any piece of information the you want. Want a query of all events that had more than 20 peoples worth of rice pilaf in the month of June 2 years ago, its one click away with Caterease. I've been in the catering business for 10+ years and Caterease is hands down the best Catering Software out there if you want to make things your own and customized to your business. I could go on for days about why I love Caterease!

Because it is so big and customizable, it does take a while to set up. You can come into it new and work off templates and be just fine but if you want to really take advantage of all the great features Caterease has, be ready to spend some time setting it up. Although it may take some time to setup, once you do, you are all set! With the endless video tutorials and help center articles, you have everything you will need to set things up your way.

Reasons for switching to Caterease

TPP did not even come close to the customization ability or integrations that Caterease has. We worked with TPP for many frustrating years and I am so happy that we switched to Caterease. One of the worst parts of TPP is the fact that you can not delete anything. Once its entered into an event, its there, in the system forever. This, over the years, created a huge jumbled crazy mess of a program that became beyond annoying to work with. Businesses grow and menus change and TPP just did not get that memo.

Outdated and not worth the money

I found over my two years with Caterease, the very tool I purchased had become more of a chore than a tool. Nothing about the application made my job easier. I spent more time inputting ingredients, menus, recipes, events, emails, and clients than I'd ever like to admit, and at the end of two years nothing ingredients didn't calculate on menus correctly, menus didn't calculate recipes correctly, and all of their templates for emails/prints/reports look like garbage.

Not much, really. Other than than storing contacts, there was not a single facet in Caterease that made the system easy to use for the end user what-so-ever. I would have been better off tracking events, ingredients, and inventory in Google Sheets for free instead of paying $1800 a year for Caterease.

From the top: Logging in and lack of mobile availability: From a PC, you have to log into a citrix client before accessing your application. You can have the fastest PC on the planet and still have to rely on the speed of their Citrix server to get anything done (which isn't the best.) There is also a VERY bare-bones mobile "companion" app that is almost useless. You cannot add clients or events, adjust the calendar, etc. The only thing you can do is view your current calendar and contact list. And to make it worse, it doesn't store your password AND they have a forced password reset EVERY TWO WEEKS. The application itself: It's very dated and not user friendly. What should take minutes takes upwards of an hour. Want to copy and paste inside the app? That's going to cost you $600 more a year for the "professional" version. Yes, you cannot copy, duplicate, or paste an event without paying for premium service. I already was paying $1800 a year, that's an insane markup for basic functionality. Everything looks like it was made in the Windows 98 era, and hasn't been updated since. Reporting: Reporting is a joke. Very limited, very complicated, and overall useless. Again, unless you pay more! Printing and emailing: Because the application runs through Citrix, printing is very complicated (even worse with wireless printing). Emails, you can create emails directly from Caterease, but it's a gamble if the email sends the caterease-generated attachment.

I don't know, but it was a mistake.

Reasons for switching to Caterease

I switched from Better Cater to Caterease hoping to spend less time and effort on admin tasks. Better Cater worked fine for what it was, but lacked features. Caterease promised more features, and then managed to mess up every single one of them to the point of being useless. I've switched to Curate and will never look back. It was a lateral move, I didn't spend any more or less money moving from Caterease to Curate. However, Curate is intuitive, user friendly, and the product support staff is on point.

Unfortunately, there is a lot of inaccuracy in this post. First, Caterease utilizes the most current Windows technology. While this customer might not like Windows in general, a quick look at any video on our website shows that program screens perfectly reflect Windows 10 design. More importantly, there is no truth to the description here of features: passwords are controlled by the user and NEVER reset; copying is indeed included and offers more options than any other program; reporting is robust and the most substantial in the industry; printing and emailing are seamless. Obviously, in his frustration with Windows this customer just assumed facts that are not true. Please visit our website or contact our team to see the real program in action. We have only 1000 words to reply here, but a 5 minute webinar can demonstrate that all of these assertions are categorically false. We hope you'll see for yourself.

Some of the reporting tools are lacking, email blasts to groups are limited and the software doesn't seem to be able to evolve as quickly as it should.

Very Powerful, can do a lot, but too much for my needs

Caterease kept all of my work schedule running smoothly, it was a bit of a pain for inventory tracking but it can be done.

Caterease has a ton of options and easy to get information out of it as long as you are a subscriber. The Subscription is pretty steep but if you are doing 6 and 7 figures in sales it is worth it. I am a small shop it was too much for what i needed.

The Price is too steep for my shop. I have found other software providers but there are some short comings i have to deal with.

I used Caterease for 8 years then switched mostly because the price was getting to be too much for what it returned.