Every year, Software Advice talks with thousands of owners and managers looking for the right computerized maintenance management software (CMMS) for their business. This provides us with unparalleled insight into the needs of CMMS software buyers.

We recently analyzed a random selection of 385 of these interactions from 2013, in order to uncover prospective buyers’ most common pain points and their reasons for purchasing new CMMS solutions.

Most Buyers Use Manual Methods, or Nothing at All

When asked what kind of system they currently have in place for maintenance management, nearly half of prospective buyers (48 percent) mentioned that they currently use manual methods, such as paper or spreadsheets.

Much fewer (22 percent) stated that they already use a CMMS, and 19 percent said they have no system in place at all. Others use either standalone software systems, such as an enterprise resource planning (ERP) system, an enterprise asset management (EAM) system, a work order system or an inventory system (a combined 4 percent). Another 3 percent use a combination of systems. 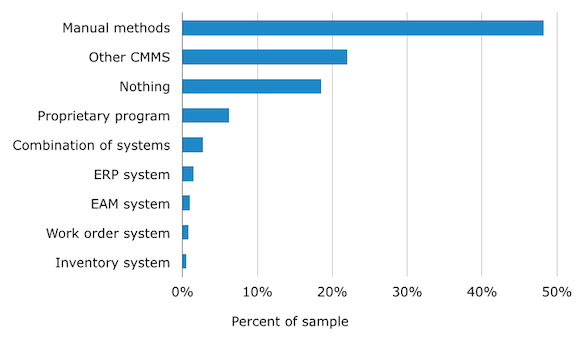 John Rimer is the owner of FM360 Consulting, which helps companies with program assessments and optimization in dozens of industries, and he has more than 15 years of experience in facility management.

Rimer says that many companies will continue using the same methods for maintenance management for a decade or longer, in order to avoid the laborious and risky process of transferring data into a new system. Thus, he notes, these buyers most likely represent the wave of businesses finally looking to begin using a computerized system or to upgrade an outdated one now that so many software options are available.

Buyers shared their most common pain points with their current methods, whether those were manual or some kind of software system. And there is a clear reason most buyers gave for shopping around: with 62 percent of mentions, many buyers cite a desire to improve efficiency and streamline operations.

Other reasons varied, but 12 percent of the reasons mentioned that they needed to begin using a computerized system, and 10 percent cited the need for a system that has support available and can integrate with other modern software.

Fewer said that their current system lacks features they want (8 percent) or has a poor user interface (6 percent) that makes it difficult or confusing to use. 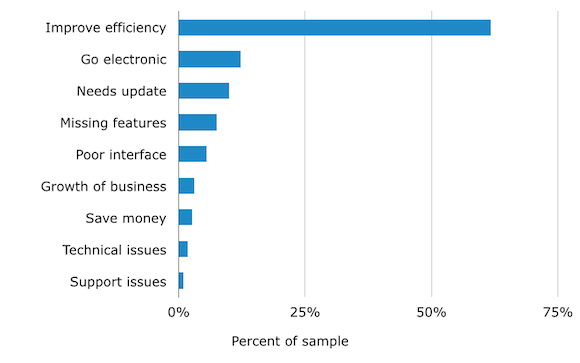 We also found that 37 percent of reasons mentioned wanted to replace an existing CMMS wanted to improve efficiency, and another 24 percent wanted a “more modern” system. Indeed, several buyers mentioned having an older software system, and some were even using one based on DOS—an operating system that became virtually obsolete in the late 1990s. 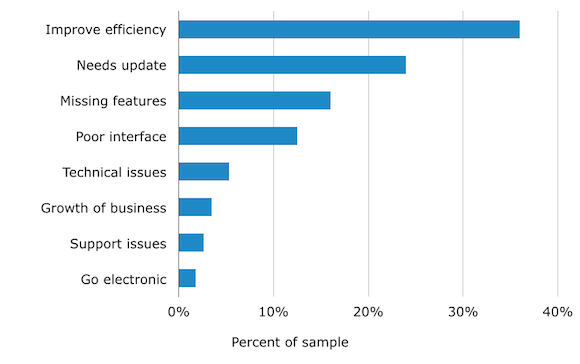 A handful of comments mentioned specific complaints with their current CMMS: no ability to import Excel files, no mobile access, substandard reporting or inventory capabilities and poor user-friendliness.

Maintenance managers who are replacing existing systems can take advantage of improved technology to help them maintain more accurate data in real time. Being able to import Excel files, using mobile functionality to input data from the field and having robust reporting and inventory management all contribute to accurate, real-time data.

Given that most companies keep a CMMS for several years, it’s not surprising that so many need an update. Just 10 years ago, Rimer says, there were only a handful of CMMS vendors. Today, buyers have more systems with more features to choose from than ever before, which may be drawing more maintenance managers to consider adding or replacing software. 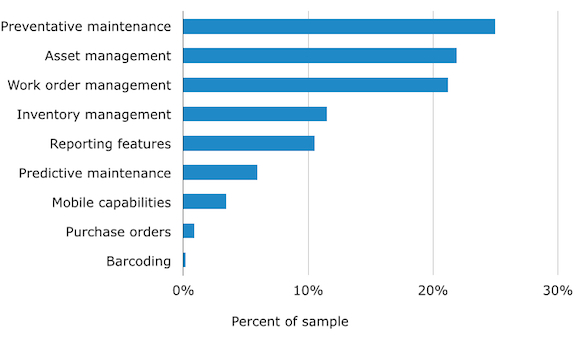 Rimer says barcoding features are generally only used in more critical environments, where tracking assets is important to maintain accuracy (such as when manufacturing medicines) or to maintain safety (such as in an oil or gas refinery). Thus, regular office settings might only need software that performs basic CMMS functions.

Most Buyers Have No Determined Deployment Preference

Almost three-quarters (71 percent) of buyers didn’t have a specific preference for deployment. And the split between on-premise and Web-based versions is nearly identical: 14 and 15 percent, respectively. 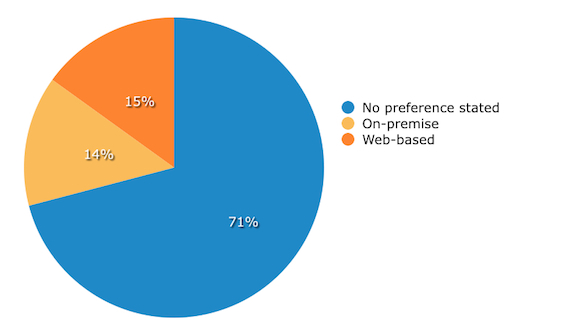 Web-based software is becoming more prevalent across many industries, because it gives managers access to information from anywhere. However, depending on the assets being tracked or the type of data held in the system, Rimer says, a company may want to maintain its data on-site for security reasons.

When asked when they planned to make a purchase, the vast majority (80 percent) of buyers said they would make a decision in fewer than three months. Only 17 percent plan to take three to six months, and 3 percent said they would take six months to a year to search for a CMMS. 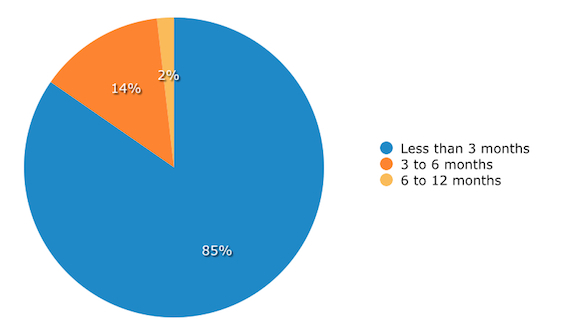 Most Buyers Have Few Assets and Users, But Many Employees

Just over 50 percent of the buyers we spoke with only require access for two to five users, and another 20 percent need access for six to 10. Only 1 percent of buyers need more than 100 users to be able to access the system. 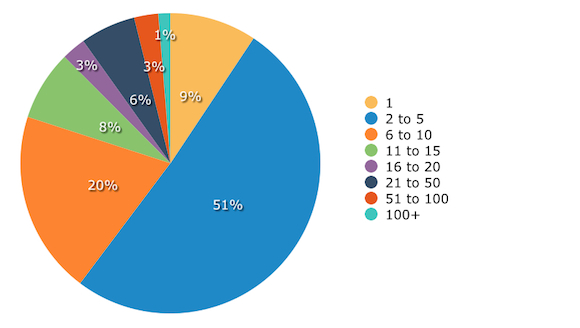 A CMMS can be used to track maintenance of facilities, vehicles or machinery—collectively defined as “assets.” A majority of buyers (36 percent) report that they oversee just one building, vehicle or machine, and another 26 percent manage between two and four. Only a combined 8 percent of buyers manage 100 to 200 or more separate assets. 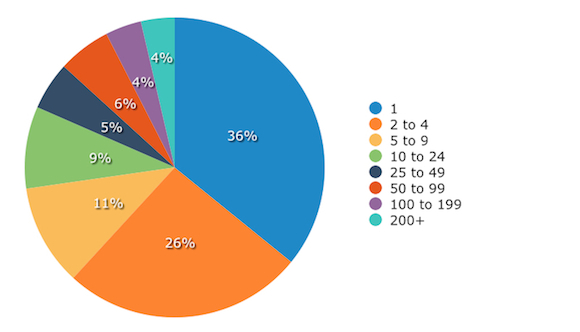 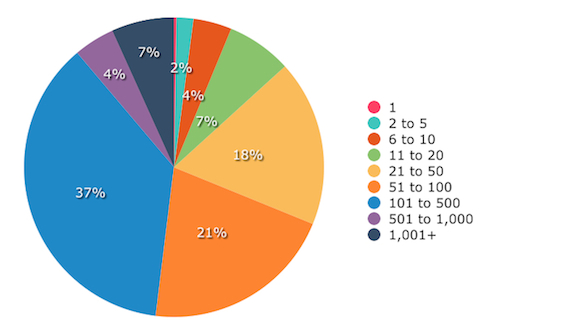 Rimer says that rather than being dependent on business size, the decision to purchase a CMMS is based more on how complex a business’ needs are. And these demographics show that most of the buyers we spoke with are from small- to medium-sized businesses that maintain a handful of facilities or a small fleet of vehicles or machines—in other words, businesses with relatively less-complex needs.

The data shows that prospective buyers in our sample are mostly from smaller businesses new to CMMS software, and who are looking to reduce manual work and increase efficiency of operations. And with new technology and a growing number of CMMS vendors, the real determinant for most buyers, Rimer says, isn’t functionality, as many are extremely similar. Rather, the systems that are easiest to understand and use are chosen most often, he explains.

Software Advice regularly speaks on the phone with organizations seeking new computerized maintenance management software. To create this report, we randomly selected 385 of our phone interactions from 2013 to analyze. If you’d like to further discuss this report or obtain access to any of the charts above, feel free to contact me at taylorshort@softwareadvice.com.