Overview
Reviews
Comparisons
Alternatives
Freshservice is a cloud-based IT Help Desk and service management solution that enables organizations to simplify their IT operations. The solution offers features that include a ticketing system, self-service portal and knowledge-base. The solution also provides a mobile app for iOS and Android that allows IT administrators to service requests remotely. Freshservice provides ITIL-ready components that help administrators manage assets, incidents, problems, change and releases. The Asset Management component helps organizations exercise control over their IT assets. Software/ hardware assets can be added, tagged, tracked and delinked, ensuring asset visibility and awareness. Freshservice also offers gamification module called "Arcade". This module enables IT a... 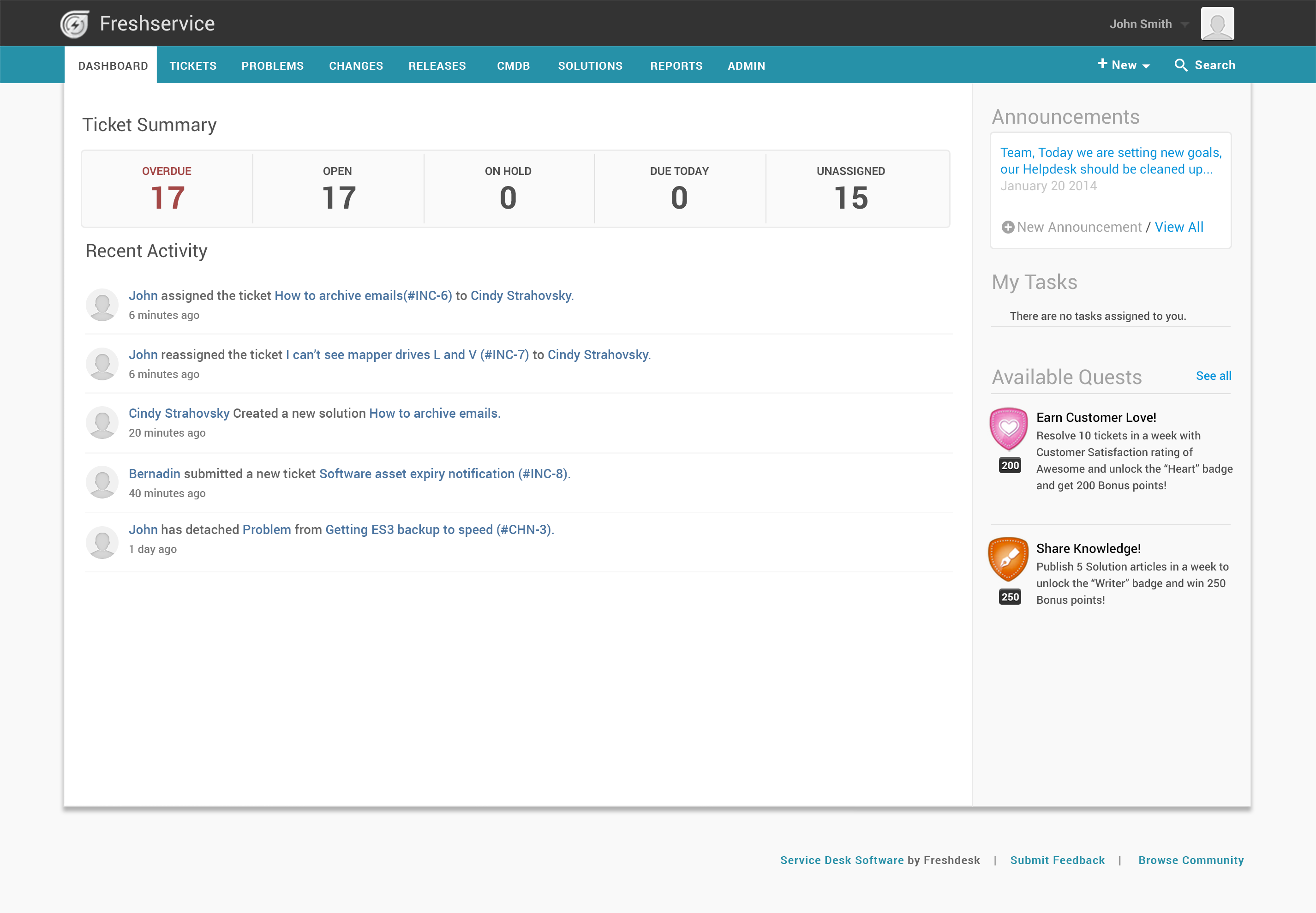 This is probably the best I used for ticketing. The support is really good, the only bad thing is that you have to contact mostly via chat.

The features it provides are really good. The ticketing flow is easy to follow, we can handle our Service Catalog, integrate with Active Directory, manage Asset Inventory and now we started using the Project management tool.

The configuration (Initial Setup) is kind of complex. Design the flows is friendly, but complex if you have many rules, but the good thing is that support guides all the way during this process.

SysAid performance was not good. The technical support is not good either.

You can do a lot of great things with Freshservice

Complete platform for IT service management and reporting on client needs. It gives me the ability to develop material that can be provided as assistance to customers, as well as report back internally to the team and to top board management.

I appreciate that it is not only affordable, but also demonstrates a lot of value due to the fact that it comes with a lot of features considering how much it costs. FreshService is capable of competing with ServiceNow in terms of IT service management, and I am accustomed to utilizing ServiceNow.

The constraints placed on portal design, in addition to the requirement of having HTML coding skills. I have not been able to determine whether or not it is possible for us to have parent portal sites that include kid pages, and the process of developing these pages will require experience in coding.

Setting up workflows is a really easy procedure. I had no trouble learning how to make use of all of the features that were available in the Admin area. The entirety of the experience is pleasurable and simple to use, boasting a modern design and appealing iconography.

FreshService is Great but not consistent

It's amazing! it's just hard for me to hand over some of the responsibility due to the steep learning curve. Support could really do with arranging time to speak to you instead of email tennis, support can be slow but some agents are stella!

The way it can be used to report on bottlenecks and problem areas as well and programmed to tackle them is a game changer. It's great but you do have to know what changes impact others and I think it could be made more clear even for those with experience it wouldn't hurt and for those learning it would speed up the learning curve a lot.

Inconsistencies in user interface. Menus and options and ways of changing things differs on newer or older modules. Also the Employee Onboarding is great but a pain to adjust if you wish to change the Stakeholder order and initiators. Also linking to AD groups for requesters and agents would be ideal.

Previous experience using FreshDesk and how it was beneficial to our needs.

KACE was old and lacked options. I had FreshDesk experience and suggested FreshDesk but we landed on FreshService which make FreshDesk look like BETA software.

I have had several tickets so far where the second level support team have sworn could not work or told me that the functionality is not possible, forcing me to push back on them. At this point they suddenly realise that the product can actually do what I have said all along it should, only a bug is in the way. On at least one occuration, they acknowledged a bug, spent weeks ignoring it, then when I asked for an update swore it wasn't a bug at all and I was just doing things wrong.... thus forcing me to escalate the case. In fact, on one occassion they submitted a set of incorrect repro steps, then blamed *me* for the mistake they made and told me there wasn't any problem!

FreshService is one of those frustrating products where the potential is so high and overall execution is done very well, but is let down by ridiculous bugs and even worse support. If Fresh could get to grips with this then I'd score them *very* highly. Unfortunately, they have not proven to be able to achieve this.

Reporting is dire. Bugs galore in modules you would not expect. Obvious features are missing, you try to work around them... and encounter a bug.

Best ITSM / ESM tool out there

We are solving 1200 tickets a week with a team of 22, and automating resolution of 320 tickets a week using workflow automator. We were able to get up and running with Freshservice with only 3 months for planning, build and implementation.

- Sandbox sync sometimes fails and needs Freshworks support intervention - Only the main requester can access the ticket, and it's not possible to add others to see the ticket - No first-party SSO integration - we have to use a 3rd party plugin for SSO & SCIM which only syncs user attributes when they re-login - Agent permissions are not granular enough to allow us to lock down the number of admins as much as we want - WYSIWYG editor has quite a few quirks around new lines and styling

- ServiceNow requires even more building and configuration than Jira, and requires programming using AngularJS, a now deprecated framework, and we would need to hire programmers who specialise in it and configuring ServiceNow - ServiceNow's user experience is also pretty outdated and slow compared to Freshservice

- Jira Service Management requires significant building and configuration, and out-of-the-box Freshservice is pre-configured ready to go, and any configuration you do is a bonus, not a requirement. - Jira's user experience is very outdated and slow, wasting our agents' and requesters' time.