Product Overview
User Reviews
Alternatives
Estimating Link is a construction estimating and bidding solution. It’s suitable for heavy highway, environmental, bridges, site-work and civil projects, and both state and private commercial work. Estimating Link allows users to create and re-use task data from previous jobs and scale tasks to the appropriate amount of work being done. The solution features subcontractor/material and rate table comparisons as well as a fuel worksheet that automatically recalculates the appropriate resources. It also offers the ability to move revenue sources in order to take advantage of quantity overruns or underruns. Users can check their bids for possible errors and the program will report potential pitfalls and oversights. Estimating Link integrates with DOT electronic bi...
Close 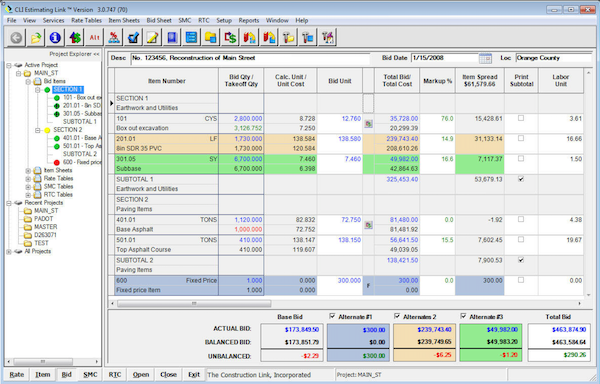 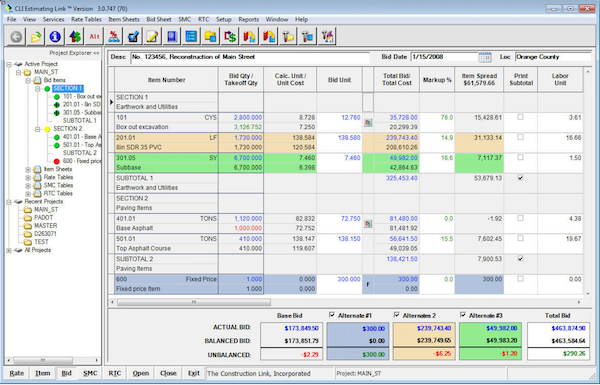 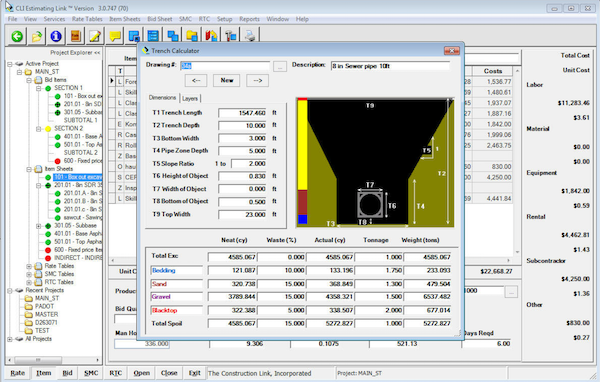 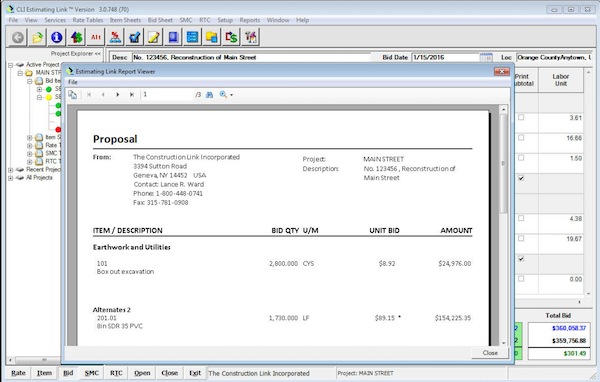 We first choose Estimating Link around 1988. Initially it was "macro" that used Lotus Symphony. Over the years, CLI has greatly improved and took advantage of the latest technologies in computers and software. Recently we have switched to the Remote Estimating. This allows us to work off-site and ensures our database contains most recent additions and changes.

At first glance, I like the simplicity of the software - the ease of developing costs and then revising them as necessary. The software fits with how we estimate construction costs. The format is perfect for highway contractors.

I wish we could extract information from the database to create reports on historical jobs. For example, pull together all the Item Numbers for selected jobs and associated costs estimates. Use that information to analyze past production estimates etc.

CLI offered a great product over what was available at the time - mainly spreadsheets. Since then it has only improved and kept up with our needs. 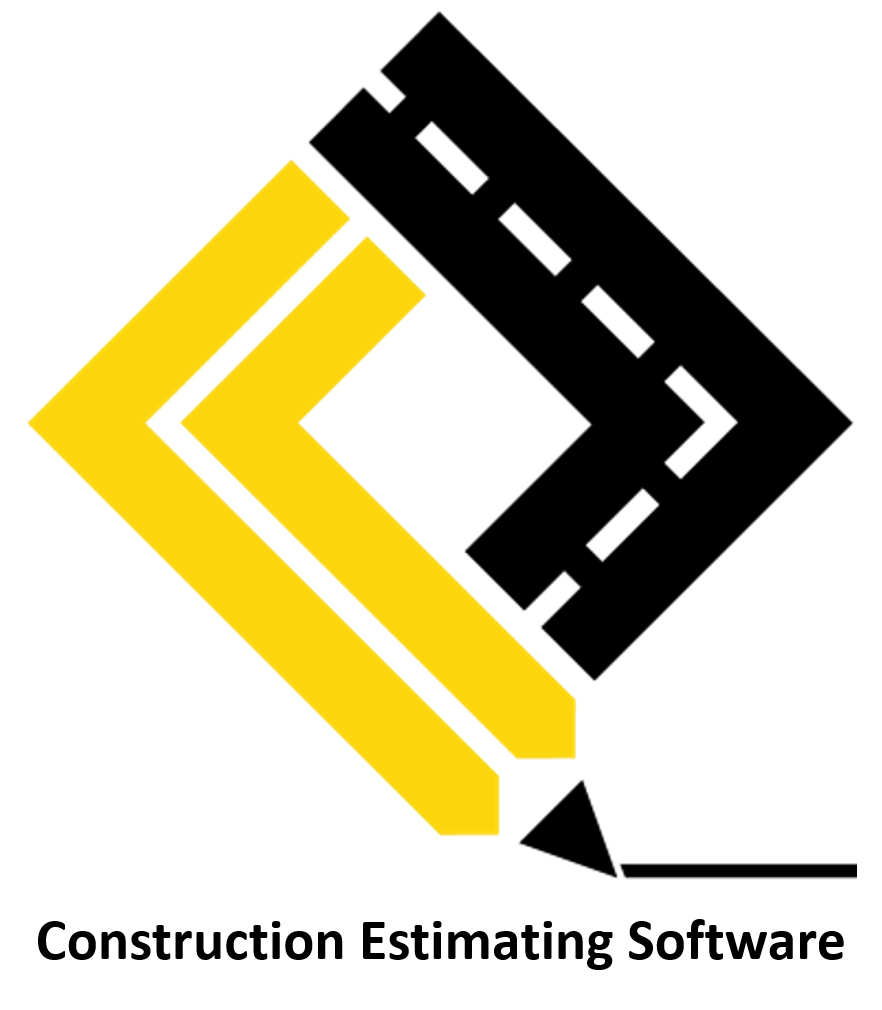 Response from The Construction Link

Hi Gregory! Thank you for writing this 5 star review! We attribute the ease and straightforwardness to the program being designed by a contractor. The program was designed to work the way you think. I added the analysis of past production as a feature request - great idea! I agree and think others will see the value as well. Thanks again!

Dealing with the CLI team over the years has been a pleasure. There are few businesses left, (and I know of no software firms) where, when you call technical support, you are just as likely to speak to the company [SENSITIVE CONTENT] and software developer, as you are a technician. Over the years, I have called and spoken directly to CLI's [SENSITIVE CONTENT] and developer, [SENSITIVE CONTENT] about issues, (generally the importing of data from various DOT's early internal electronic bidding system) or to kick around ideas for what I thought might make the estimating and bidding process more fluid. Most of the issues that we have experienced, that required a call to technical support, were resolved in less than 4 hours. To have the ability to speak directly to a programmer, has in some instances allowed issues to be resolved in a 5 minute phone call, followed by an email containing a "patch" to use, until the permanent fix is incorporated into the next update. Updates containing the permanent repair would often show up within a couple of business days.

From my very first use of the old .dos program in 1989, Construction Link has been very ease to use, easy to learn, (program updates and applications) and easy to teach, (new employees).

I would like to see the ability to vary the margin of markup to certain subcontractor quotes. Preferably on the Markup Summary page. But maybe even on the individual SMC tables. There are certain subcontract scopes that are inevitably either high risk or high maintenance from a prime contractor, GC stand point.

The system is simple to use and I rarely, maybe once a year have an issue and when I do, [SENSITIVE CONTENT HIDDEN] is quick to figure out what is going on and help solve the problem. Most of the time it's been user error. I think this system is awesome and will continue to use this system here and will invest in the system for my own company when the time comes.

The ease of being able to copy a previous project and make minor changes and go with it or import line items from other projects to keep from trying to remember what I did the last itme. I bid on avaerage three to six projects a week.

I honestly don't dislike anything with the system.

We've been clients for many years and our company has grown along with them. During that time, the support we have received has always been exemplary. The addition of Kathleen to the team has only increased that level. We would not have the confidence to bid large, complex projects without the help of Estimating Link.

What seems to be the most useful aspect of this software in our case, is that we can copy and past, past projects that are similar, and create new ones, saving lots of time and effort. In addition, having items already built, with man hours, crews, payroll, et. gives us confidence that all our bases are "covered".

I don't like the fact that if you have an item that is the same "name" you have to "tweek" it (add a space, dash, et) when adding to your bid. After a bit, you have lots of "items" that look pretty much identical but you were forced to create.

Response from The Construction Link

Hi Chip - Thank you so much for taking the time to leave us this excellent review and recommending us to others! We are thrilled to hear that The Construction Link, Inc. has helped you and your company grow, instill confidence with large and complex bids, and that you've received exemplary customer service. It's also fantastic to hear that copy and pasting Estimates and Items saves you time and effort - that's our goal! I'll reach out to you personally so we can tackle the Item names. Thanks Chip!

Simple to use and affordable estimating solution

It is very simple to setup and use. This software is a very affordable . Customer service is always quick to respond and knowledgeable.

All of our benefits and other hourly costs are lumped into one category. OT calculators must be created manually