PriceWatch Demo
PriceWatch Demo
Product Overview
User Reviews
Comparisons
Alternatives
PlanSwift is the #1 Takeoff & Estimating software in the world! PlanSwift software is designed for Commercial, Industrial, Institutional and Residential GCs and Subcontractors in almost every construction trade. With PlanSwifts visual point-and-click interface, users can drag and drop individual parts or assemblies directly onto a digitized blueprint to gather quantity Takeoffs and begin the estimating process. Measure linears, unit counts, square footage, pitches and angles in seconds with just a click. PlanSwift calculates the takeoffs automatically - saving users valuable time and effort when they bid on jobs. PlanSwift provides a way for users to calculate digitized values, including labor and material costs, by clicking various points on the screen. The Single...
Read more 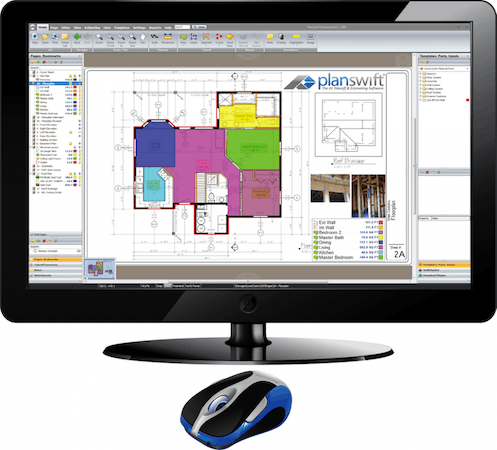 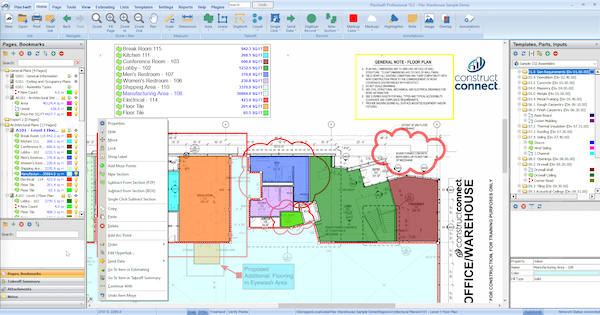 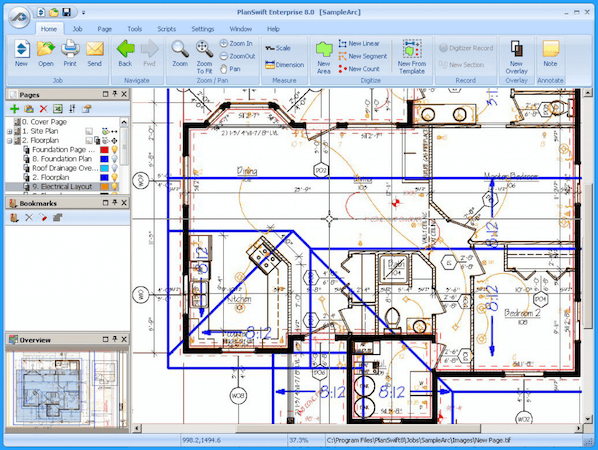 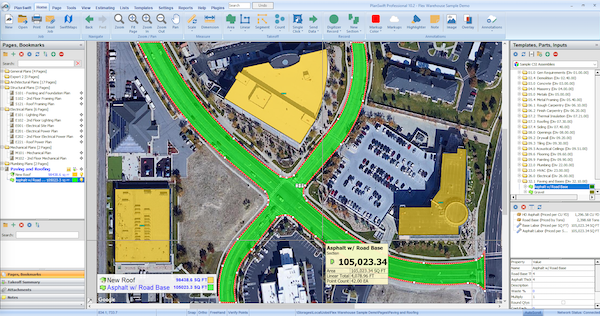 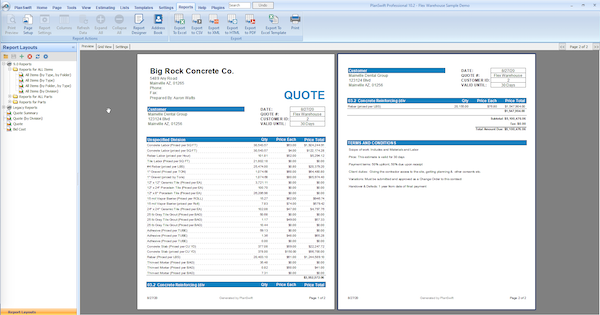 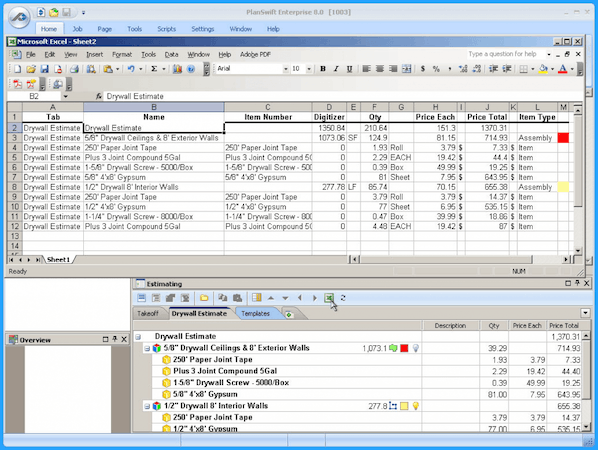 One time fee may be expensive for some, but it is well worth the investment!

It's A Love/Hate Relationship

Like the title says, it's a love/hate relationship. Lots of really powerful features, but it's really outdated and lacking some modern cloud syncing features and others talked about in the Cons list.

It's extremely in-depth and you can do almost anything you can imagine. The tools to build parts and assemblies are extremely extensive and haven't found anything we can't do. Other than a handful of bids that we send out for, we estimate the entire home for each client. Every single nut, bolt, box of screws, rebar, rolls of house wrap, etc. There's nothing we can't do. The

Terrible customer service! I usually call and have to leave a message and someone might get back to me in 24-48 hours. They don't seem to know their software well either as we were able to figure out things that they said wasn't possible... Way outdated: No 4K monitor support, very old looking interface, only available for Windows. No built-in cloud syncing between computers. If there is a change in pricing, adding parts, building assemblies, etc. for a while we had to manually do this in each computer. We ended up figuring out how to utilize a cloud platform to sync up all changes to our parts and assemblies across computers and it now works now. No built-in Job file sharing. Again, we set up a cloud system using Google Drive local sync and it works well. We just can't be in the same job at the same time or it might get errors. There is no automatic association between a part in a parts list and the same part in an assembly. For instance, by default, if I update a price in the parts list it doesn't reflect that price update in any instance of the part used on an assembly. You have to use a $200 plugin that basically adds a search and replace function. Price changes on parts are not reflected in current jobs unless you manually go in and change it. We found a workaround for this though. For all of our assemblies, we were able to link the "Cost Each" back to the original part's "Cost Each" through a file path. Just a pain. I ran out of room to type so I must stop here..

We actually tried switching to STACK and it had a lot of really good modern features, but it just lacked the powerful and in-depth tools that PlanSwift has. We just couldn't build extensive assemblies and things to the detail we like with STACK. It also lacked a lot of built-in reporting features, no rounding up option built-in, limitations on exporting to Excel, etc. STACK's Support team is incredible though! And they are always adding features on almost a weekly basis. PlanSwift only does an update like once a year... It's terrible. The software looks the same and has the same tools from 10 years ago. Not much improvement since... We really hope that someday STACK will get to a point that we could switch to them. ProEst is just too pricey and weren't impressed by reviews. So we never even tried it.

Use of Planswift for marking plans

Able to verify points to get correct lengths, snap point to point, define width of wall.

This software does not work well on the database on Dropbox, lots of errors if 2 people are in it at the same time or if you have multiple instances open at the same time.

I've been a Planswift user for last 8 years. The program has a lot of bells and whistles with so many custom options. Its a rather incredible concept but some of the tools like hip/valley tool, comparative overlay and auto count don't work properly. My number one issue with plan swift is the code. I complained about how slow the program would get after just a few hours of measurements, especially when using a lot of joint tool and overlays. I would mostly get silence from customer support when making that comment, it seemed odd but I didn't put much thought into it and just kept upgrading hardware on my PC to compensate. Well, now I have a computer that could animate for Pixar yet Planswift still shows me its hourglass mocking the value of my time. I also noticed it would crash more often than I find reasonable and will also crash excel when open even if not using Planswift at the time. When this would happen, excel was unable to recover my progress in that worksheet. VERY frustrating. So, I started to look into composing better spreadsheet design do compensate. I went to an excel guru with estimating background and after just several hours we were both unsure of how we were to make chicken salad out of the fodder. I decided to go shopping, there are tons of in screen programs out there but if you want takeoff with legends to be able to efficiently convey that fancy estimate you spent hours and days putting together to a team on the forld, there are very few that do it well. Most do not have a joist tool or hip/valley intelligence and many other features Planswift has. But most all the others are faster than P.S. and will allow you to work on multiple jobs at same time (P.S. does not). For the light user on a budget, this could be your ticket and I will gladly sell you one of the four P.S. Licenses I am currently sitting on. But if you want to do whole project estimating that is visually auditable with reliable output that won't slow you down and actually speed this boring, low-to-no paying process down then I suggest you search elsewhere. I found my dream software by mixing tei that have most of what Planswift does combined. But mega faster, without crashing or ever hour classing and better reports I do t have to spend hours cleaning up after exporting.

It is very easy to create templates for our specific scope as a subcontractor and perform a takeoff. It is very helpful to be able to plot and print a set of plans with the layers of items and a legend. We can create a new set of plans specific to our scope.

Not a lot to complain about. Sometimes it's a little buggy when signing out and trying to use on another computer. It will say the license is logged in and occupied elsewhere even though it's clearly been signed out on the other device. When performing a takeoff and a VERY large set of plans it seems to get a little laggy with so many items on the page...could also be due to the power of the computer running the software. It's hard to say. Other than that, there are probably many more features it offers that we aren't taking advantage of, but that's up to us to learn more about what it could do for us. 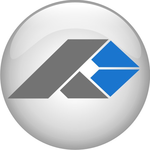 Thank you so much for the wonderful review! We are so glad it is easy for you to do your takeoffs. May it continue to make you successful.