Freshdesk is actually doing many things right—in fact, 50,000 businesses worldwide use the Freshdesk platform to manage their service and support. Since launching their flagship product in 2011, Freshdesk has brought three other products to market: 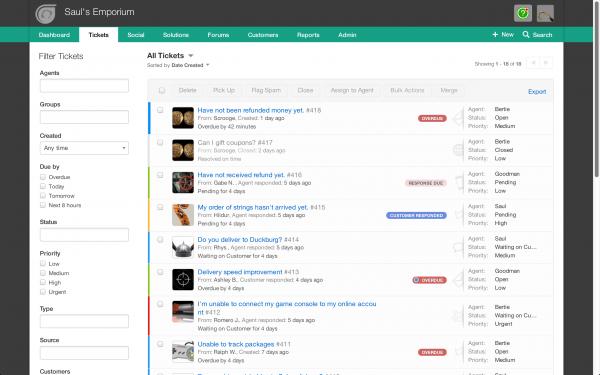 As popular and full-featured as Freshdesk is, no service solution can be the right fit for every company or every customer-base. For this reason we’ve put together this short list of alternatives to Freshdesk, dividing them into the following two categories:

This first group of Freshdesk alternatives includes other market-leading help desk and customer service solutions. To compile this list, we scored products based on their brand’s online popularity as well as on data from our own survey of software users.

Founded in Copenhagen in 2007, Zendesk quickly became the name to beat in cloud-based service and support software. While their market share has been under constant attack—dozens of comparable products have been launched by competitors—Zendesk has maintained the clear focus its name implies.

“Clean, uncluttered and focused”…These words come up often when Zendesk customers describe and review the product, particularly in reference to its user interface (UI). Zendesk strikes the right balance between including too much functionality on too many screens (and ending up with a cluttered and cumbersome UI) and providing too little functionality (forcing agents to waste time going back and forth between screens).

Zen isn’t about seeking perfection; instead, it seeks a frame of mind that’s at peace with the inevitability of imperfection. Similarly, while many help desk and customer support solutions claim perfection, Zendesk has been quite forthright when discussing the inherently imperfect nature of software, even their own. Zendesk, for example, is not fully Information Technology Infrastructure Library (ITIL) compliant, while other help desk solutions are.

Salesforce acquired a customer support startup in 2011, rebranding its small and midsize business (SMB)-focused cloud service as Desk.com. And, just as you’d expect from the world’s preeminent and pioneering SaaS company, Salesforce has turned Desk.com into a very popular service desk option.

Given its pedigree, it’s no surprise that Desk.com is one of the most “expandable” solutions. Salesforce owes some of its popularity to the fact that the Salesforce platform lets companies easily tailor the product to their needs, either through custom changes to the code or by the addition of third-party applications.

While Freshdesk is an all-purpose service and support platform, Freshservice is the company’s focused IT support desk solution. Offering many of the same usability advantages that garner praise for Freshdesk, Freshservice is a great choice for companies that prioritize usability over functionality.

That isn’t to say that Freshservice is lacking in functionality; rather, it puts the most-used functions front and center to preserve the clean UI that helps agents work more efficiently. Additionally, Freshservice is a fully ITIL-aligned system, making it a great choice for companies who already incorporate ITIL processes.

The many ITSM tools provided by Freshservice:

Help Scout, with an average rating of 4.67 out of five stars from 22 reviews is a unique support solution. Its focus is on email-based support and employee collaboration. Help Scout is unique in that it has no customer-facing elements. Everything happens on the back end. Customers don’t see ticket numbers or case numbers, nor do communications arrive as generic or templated responses.

Samanage is a big name in service and support software. It’s also very popular for a host of reasons, including its flexibility and breadth of functionality. It is a full-featured help desk solution that can still be used, effectively and efficiently, by mid-market companies and SMBs. It’s rated 4.6 out of five stars by 57 total reviewers.

Like all products in this guide, Samanage is a cloud-based platform. It also offers extensive integration options, including full compatibility with Google Docs, Slack and Jira OnDemand.

As mentioned above, the field of help desk products contains a very wide variety of applications, each having its own balance of functionality and usability. If none of the above Freshdesk alternatives seem like the right fit for you, expand your search with the ratings and reviews here.