Touchpoints are defined as the “critical moments when customers interact with [an] organization and its offerings.” As they shape customer experience, companies try to manage them carefully. But there are times when other business goals force touchpoint management off the rails. The derailment can end with a customer experience that is unremarkable—or, in the case of Ryan Block’s call to Comcast, with a public relations (PR) train wreck.

In July, Block and his wife called Comcast with the seemingly simple goal of cancelling their Internet service. Their touchpoint was provided by an agent in Comcast’s customer retention department, who tried unrelentingly to change their minds. Keeping them as customers was, of course, the agent’s business goal. But in his attempt to meet that goal, the agent created a touchpoint so terrible that Block, incredulous, recorded the call and put it online.

The recording caught the public’s attention and became a viral news item. It now stands as a telling example of what happens when a business goal forces a touchpoint off the rails. Unable to look away, we conducted a survey to examine the wreckage and learn how other companies can avoid similar disasters.

At Software Advice, we follow the customer service industry very closely—so the story about Block’s phone call with Comcast showed up on our radar early on. Curious if others were paying attention, we checked Google Trends to see if interest in the term “Comcast phone call” had increased. Sure enough, it had:

As the story began to spread—fueled by a mix of schadenfreude and the public’s already record-low opinion of Comcast—we decided to take a closer look at what this customer service failure might spell for the company behind it. Now, it’s one thing to know that a story has gone viral and to see it trending heavily in the news and on social media, but it’s another to know how many people have actually heard it. We designed the first question of our survey to see how many people had actually heard about the story. Turns out, 30 percent of U.S. adults we surveyed had heard about Block’s call to Comcast. 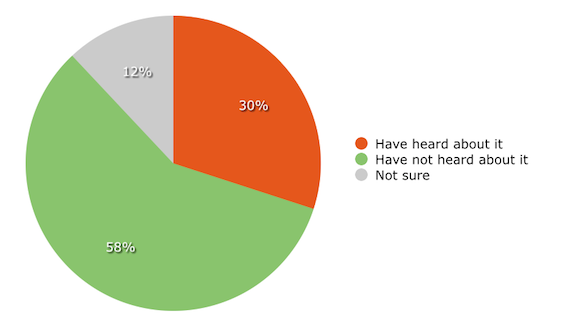 From a PR perspective, it’s a bit terrifying to consider that what began as a customer service mishap between one customer and one retention agent could turn into a negative advertisement for the company with an audience nearing Super-Bowl levels. It’s clear how important touchpoint management is.

Within a few days of the call going viral, Comcast issued an apology—or rather, an admission of embarrassment.

“The way in which our representative communicated with them,” it stated, “is unacceptable and not consistent with how we train our customer service representatives.” Comcast also said it’s investigating the incident and plans to take quick action.

But Comcast’s assertion that the agent was behaving “inconsistently” did not ring true with the public. Many expressed in online comment sections—including those on Comcast’s own page—that this behavior was all too consistent with their own experiences. They said this is what they’ve come to expect with customer service, and especially customer retention, interactions.

So, we asked those who had already indicated they’d heard about this news item if, in their opinion, similar customer service calls were common. The response was clear: 80 percent feel that similar calls are “common,” “very common” or “extremely common.” 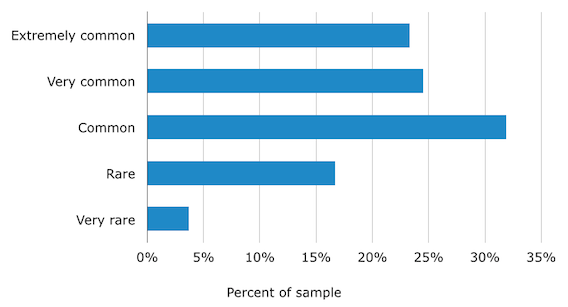 It’s no surprise, then, that the public had a hard time believing it was a rogue conductor who lead to Comcast’s train wreck.

How might this negative publicity affect the public’s willingness to do business with Comcast? Of those survey respondents who said they had heard the story, we asked whether or not it would affect their opinion of, or desire to do business with, Comcast. In other words: would this story affect consumers’ actual purchasing decisions? Over half said it would. 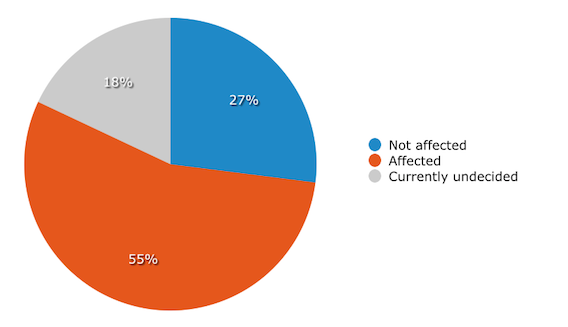 How much of an impact did it have? Of those who heard the story and said that it would affect their decision to do business with Comcast, a striking 73 percent said they would either “make an effort to avoid using Comcast” or would “avoid them and/or cancel my service.”

How Call Will Affect Consumer Use of Comcast’s Service 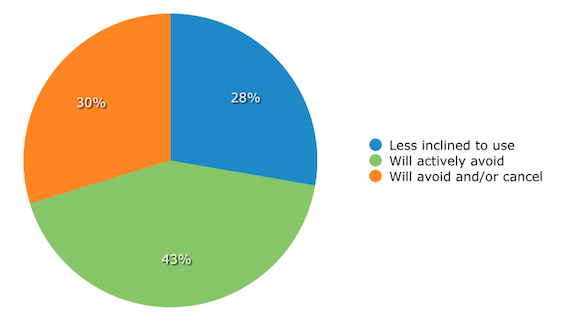 If it wasn’t clear before that the publicity from this derailed customer interaction could have some casualties, it certainly is now.

Calls With Financial Incentives Can Turn Away Customers

When at first Comcast blamed the call on a rogue agent, many expressed disbelief. Block himself, who from the beginning was clear that he didn’t blame the individual agent for the poor customer service he received, tweeted:

Indeed, there is some sort of incentive system in play in most sales-related and retention-focused call centers. These centers have very high call volume, with hundreds of agents working at a time. Offering incentives is often the most efficient way for management to motivate agents and keep them focused and on-point. However, Block’s call is evidence that offering financial incentives for call outcomes could actually cost your company business.

A former Comcast employee has shed more light on the specific incentive system Comcast uses to manage its retention specialists. He explains how Comcast uses specific cut-off numbers to determine incentive payouts. If retention agents are unable to convince certain percentages (typically, around 80 percent) of people to keep their service, then the agents’ bonuses drop. After a certain point, they get no bonus at all.

“The [customer service reps] watch these numbers daily, and will fight tooth and nail to stay above the ‘I get nothing’ number,” explains the former employee. Obviously, they may be willing to fight long past the point of effectiveness.

Measure the Success of Individual Interactions

It’s unlikely call centers will do away with the practice of incentivizing call outcomes. It’s a relatively effective management model with few cost-effective replacements available. Perhaps, then, companies should consider incentivizing different metrics than simply the number of customers their agents convert.

Francis Frei, senior associate dean at the Harvard Business School and co-author of Uncommon Service: How to Win by Putting Customers at the Core of Your Business, suggests that businesses use touchpoints to convert customers into ambassadors for the brand, rather than to simply convert sales. Speaking of the Comcast call in an interview with the Harvard Business Review, she explains:

“They could have easily done it differently, and I am not even sure I would measure on conversions. I would measure on the question, are these customers likely to be ambassadors for our organization at the end of the phone call? That would be the only measure. I am sure it would get more retention than their current system does.”

This more holistic approach to measuring the success of individual touchpoints would certainly help avoid the type of fallout we’ve seen from the Comcast call. It would, however, require a different style of call-center management. It’s a style which has already seen success in other industries, where agents are encouraged to relate to customers on a more individual, human level.

Part of the problem is with the communications industry itself—primarily, in that it has seen a great deal of consolidation. As the dominant technology shifted away from the heavily regulated copper-wire telephone networks to the unregulated IP networks in use today, large monopolies have been allowed to emerge. This is largely to blame for the notoriously low quality of customer service the public has come to expect from cable, internet and telecom providers. Monopolies have little incentive to offer better service.

“The industry needs competition like nobody’s business, because in competitive environments, you wouldn’t get away with this,” says Frei, in reference to the Comcast call.

There is, however, quite a bit of new technology that could augment call center operations, perhaps minimizing future occurrences of the customer service derailments that incentives can lead to.

One of the most promising technologies is speech analytics software. This is software that can be added to, or included in a replacement for, existing help desk, customer service and call center software. It’s provided by a variety of vendors, including Verint, Nice, and Nexidia.

Speech analytics software listens in on phone conversations as they’re happening, and uses algorithms to detect mood and emotion in the callers’ voices. It can, for example, detect when callers are angry, happy or otherwise emotional by listening for pitch and tone changes in their voices.

Some, such as the solution offered by Nexidia, have a management console that will “show real-time alerts as they occur … The console displays a live ‘sentimeter’ giving supervisors a color-coded visual tracker.” 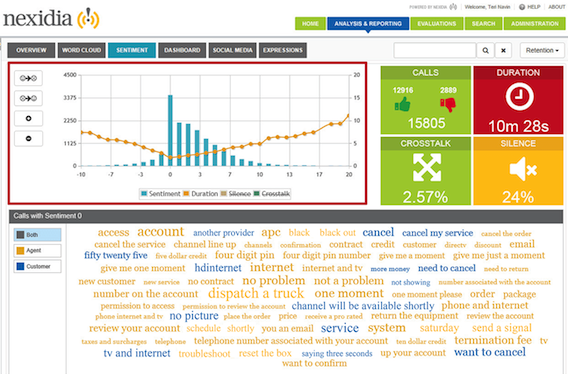 In Block’s call with Comcast, there are several instances when the agent and customer are trying to speak at the same time. This is called “talk-over” or “crosstalk,” and it’s very often an indicator that the call is not going well. Speech analytics software can identify instances of talk-over and issue reminders and notices to the agents, or send reports and alerts to their managers. It’s very likely that this software could have stopped Block’s call well before it fully derailed.

Having seen how widely news of a poor customer experience can spread—and how this news affects the public’s view of the company behind it—it’s clear why companies should be mindful of how they manage touchpoints. But touchpoint management is often overshadowed by other business goals, such as retaining customers.

For call centers, offering financial incentives for achieving these other business goals is a tactic that should be considered carefully. The risk of derailment is real. If your company provides incentives, perhaps you should reconsider the rewards themselves or consider using software; it can help prevent a train wreck like Comcast’s from happening to you.