According to Gartner, smartphones, tablets and mobile apps are forcing change in the world of customer relationship management (CRM) even faster than social media: 30 percent of sales organizations now issue tablets as the primary device for salespeople, and “bring your own device (BYOD)” policies are becoming increasingly common.

As a result, businesses are continually evaluating how to best fit mobile technology into their CRM strategy, while weighing potential benefits against the costs. Vendors, on the other hand, are looking to identify which areas of mobile CRM functionality to prioritize for future development and support.

To learn more, we surveyed a random sample of 1,940 salespeople who use mobile CRM in order to understand how it benefits their companies, which features they regularly use and what requirements they feel are most important for a mobile CRM system to meet.

Nearly Half of CRM Users Access System on Smartphones and Tablets

Close to half of all CRM users access their system via smartphones (48 percent) and/or tablets (45 percent), according to our recent research on general CRM users.

Moreover, a significant majority (81 percent) say they access their system on multiple types of devices, with 20 percent using a combination of three of the above-listed devices, and 29 percent using all four. 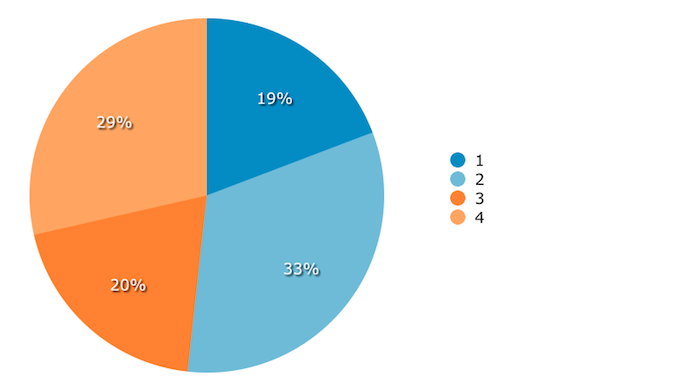 According to Craig Rosenberg, editor of the Funnelholic and co-founder of TOPO, this reflects the increasing pervasiveness of mobile devices, particularly in direct sales.

Over half of the salespeople in our sample (53 percent) say that having access to their CRM system on their tablet and/or smartphone “greatly improves” the quality of their CRM data, and another 29 percent say it “moderately improves” their CRM data. This leaves only 18 percent of respondents who felt that mobile CRM had minimal to no positive impact. 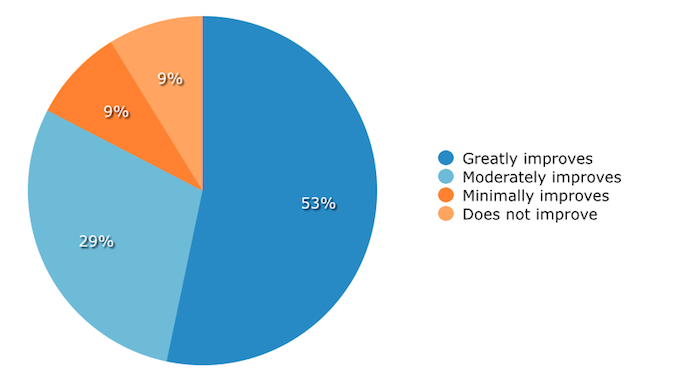 Rosenberg says the ability to add new contacts into a CRM is “a no-brainer” for sales reps who are constantly in the field meeting new people at client sites and events.

“And that certainly improves data. Most of the time the data just doesn’t go in,” he says, because sales reps traditionally have had to go back retroactively to input contact information and interaction notes after meetings.

While entering contacts more consistently can prevent deals from slipping through the cracks, Rosenberg also cautions that companies shouldn’t expect mobile CRM to have a significant impact on the quality of more complex data, such as the notes for deals.

Those, he says, “aren’t like Twitter, where it’s 150 words or less … a lot of time, [they’re] pretty deep.” As a result, he believes most reps will continue to turn to full keyboards to input that sort of information.

Those Using CRM on Both Tablets and Phones Realize More Benefits

Respondents who accessed their CRM system on both smartphones and tablets were significantly more likely to say they realized specific benefits as a result of mobile access, compared to those who only accessed their CRM on one device or the other.

For instance, 50 percent of the former group say that mobile CRM increased their efficiency, and 42 percent say it facilitated “faster, more informed decision-making.” In both cases, this was over twice the number of single-device users who said the same.

The data, therefore, indicates that being able to seamlessly switch between different devices in different situations enables reps to make better use of their time, and to have the right information on-hand when they need it. 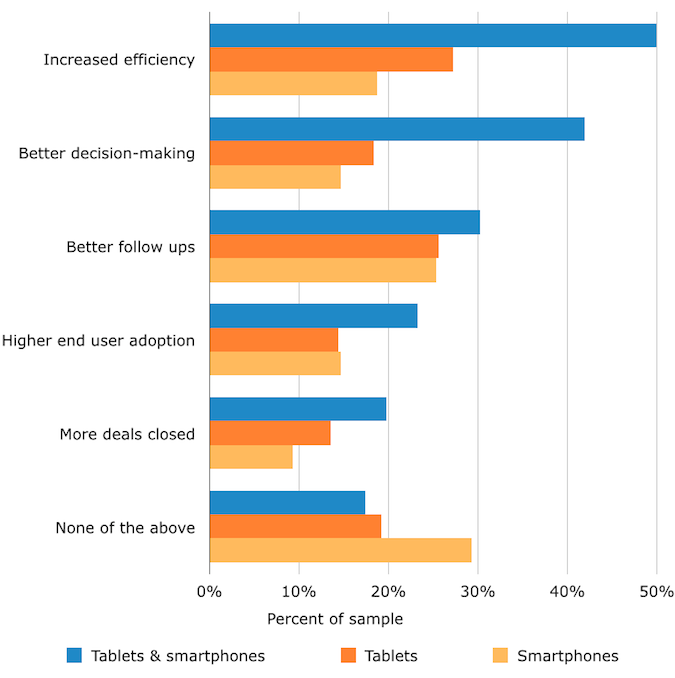 Rosenberg suggests that the primary way tablets and smartphones increase efficiency is by enabling reps to make use of downtime, such as when traveling or waiting for on-site meetings: “They think, ‘well, I’m sitting here with my phone—why don’t I go ahead and just [input the data or send a follow-up]?’”

This, Rosenberg says, means “more reps [are] actually using their CRM. … The first generation of CRM was built for the bosses, not for the people. So we grew up with aversion to entering data and using the CRM.”

Now, he continues, “there’s a new generation of people who are mobile-centric, [as well as] forward-thinkers and early adopters from the veteran set.”

This is in line with what CRM thought leader Brent Leary told us recently: that “leverag[ing] the passion people have for mobile devices with interfaces that make their jobs easier” directly leads to increased user adoption.

We asked salespeople to select which applications and features they “regularly” use from a list of common choices. Of those who indicated they used one or more of the listed applications and features, 37 percent reported regularly using their mobile CRM system to manage sales content, such as slide presentations and reports. This reflects the increasing importance of tablets, in particular, as a vector for delivering sales content during presentations.

Also, 31 percent said they regularly use their system to manage contacts. In addition to the benefits of entering customer information on the go—as described above in the section about data quality—Rosenberg also emphasized the paramount importance of accessing CRM data in the field.

“That’s the predominant use case for mobile,” he says. “The one these guys want, need and will do anything for. They say, ‘Can I get three minutes on my phone or on my tablet to find out one to three things that are important to that buyer?’ [Access to the right information at the right time] is absolutely critical to successful selling. And if it can be on my phone; accessible in seconds; provide me with some kind of snapshot that’s easy for me to see—that is the killer app.”

Rosenberg was also interested to see that nearly as many respondents (26 percent) routinely used business-card scanning—a relatively niche mobile feature—as used such core functionality as reporting or database access. For direct sales reps who meet a lot of people, he explains, entering contacts is an enormous pain. So the ability to automatically create personal and company contact profiles from business cards is a significant boon.

He even suggests that the number of respondents using business-card scanning likely had an impact on the large number who said mobile CRM access “greatly improves” their data quality, because it makes it much faster to input basic data. To encourage sales reps to actively use their system, he adds, companies have to make it extremely easy to use—particularly when it comes to entering contacts.

When asked which requirement was most important for a mobile CRM system to have, respondents were fairly divided. Many (38 percent) cited the need for seamless data synchronization across all devices.

“They want to have data as up-to-date as possible,” Rosenberg says. “No hiccups.”

Conversely, nearly as many respondents (36 percent) said it was most important that mobile CRM solutions have native applications designed specifically to provide an intuitive user experience on smartphones and tablets—again emphasizing the importance of ease-of-use for many salespeople. 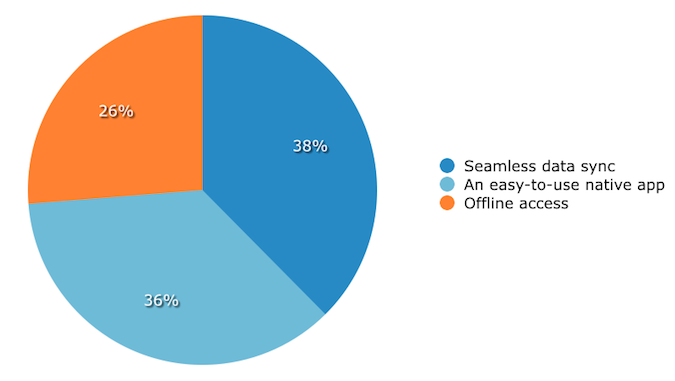 Finally, 26 percent said that the ability to use their CRM on mobile devices while offline was the most important consideration. Offline access is particularly important for salespeople who spend a lot of time on airplanes, use Wi-Fi-only tablets or frequently travel to remote areas with poor network coverage.

Most Have Used Mobile CRM for Less Than a Year

Over half of respondents (53 percent) reported using their mobile CRM for less than a year, with 33 percent saying they used it for fewer than six months. Conversely, only 23 percent have been using it for more than two years.

Amount of Experience With Mobile CRM 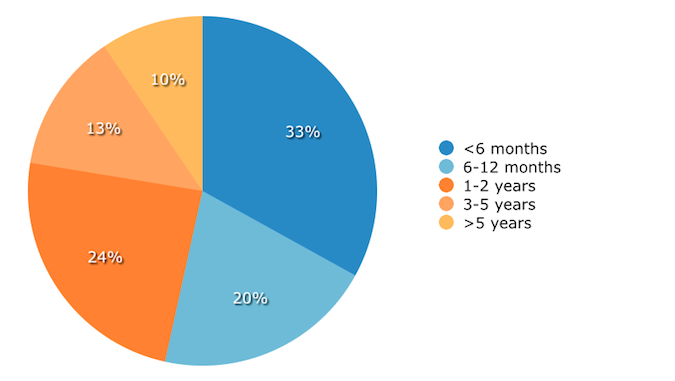 That so many salespeople are new to accessing their CRM on tablets and smartphones again reflects just how rapidly businesses are adopting mobile technology.

“If you just look at a sales rep in the field ... [smartphones and tablets] are the briefcase of old,” Rosenberg says. “Everything’s in there.”

Even as mobile CRM adoption continues to rise at a rapid clip, our research suggests that businesses that have already implemented a system are enjoying demonstrable returns on their investment, particularly when it comes to improving the quality of their CRM data. This, in turn, has led to more informed decision-making and more closed deals.

Because salespeople who access their CRM on both tablets and smartphones are realizing more benefits, sales and IT leaders should enable their reps to interact seamlessly across all of their devices. Also, in order to improve user adoption, efficiency and leads data, software buyers should evaluate solutions that offer highly functional mobile applications with intuitive user interfaces.

Because mobile CRM users are divided as to which requirements are most important, vendors should strive to improve mobile accessibility in as many areas as possible (e.g., more reliable syncing and more mobile app features). In addition, with so many sales professionals using mobile devices to access sales collateral and deliver presentations, vendors should only expect the demand for sales content management and enablement features to increase.

We conducted an online survey of six questions, and gathered 1,940 responses from randomly selected salespeople within the U.S. who currently use mobile devices to access a CRM system. We worded the questions to ensure that each respondent fully understood their meaning and the topic at hand.