Software Advice conducted an online survey of 304 customer relationship management (CRM) software users representing businesses across a range of industries and sizes in order to determine how satisfied they are with their current CRM solution, what areas of CRM technology they plan to invest in and what they feel are the greatest benefits and difficulties of implementing their system.

We also shared our results with leading CRM technology thought leaders Brent Leary and Brian Vellmure. Their insights are included alongside our own analysis below. 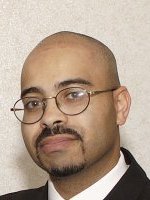 “You have the traditional view of CRM and then you have the modern view, which says ... ‘We want a system that helps us actually reach out there and interact. A system that gives us the right signals to connect with each customer and do it in the right channel, with the right kinds of content and in the right format.'"

When we asked CRM users about their future investment in CRM-related technology, 47 percent said they planned to increase spending on help desk and customer service software, with 42 and 40 percent saying the same about marketing automation and social media monitoring, respectively. 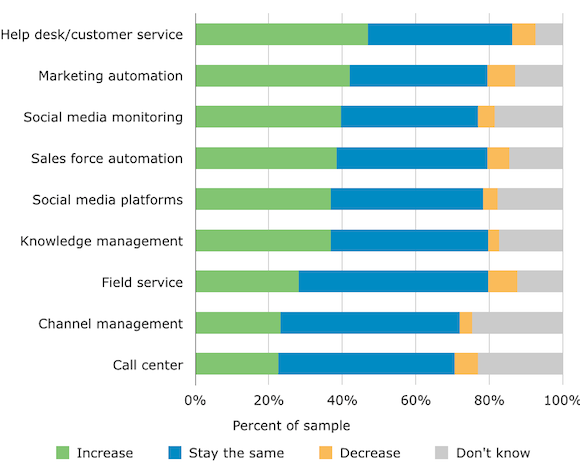 According to Leary, these data reflect a shift towards CRM technologies dedicated to improving and extending relationships with current customers.

“I believe that, two years ago, customer service would not have been at the top … but you really have to think about it at the very beginning of the lifecycle at this point, because things move so fast,” Leary says.

While basic help desk ticket management for resolving customer inquiries is extremely important, Leary adds, businesses are also looking to provide improved self-service to empower tech-savvy customers to find solutions on their own—a claim corroborated by the fact that 37 percent of CRM users are expecting to increase spending on knowledge management.

Leary also believes it’s no surprise that a considerable percentage of businesses plan to increase investment in marketing automation technology. As he puts it, one-to-one lead nurturing involves so many stages and requires so much visibility into prospective customer behavior, it becomes impossible to scale the process without an adequate software solution.

“Marketing automation is going to be more and more critical as we go on,” he says. “So I can understand why [that and customer service] are going to be right at the top.”

Respondents representing small businesses—those with 100 employees or fewer—were the most likely to say they were “very satisfied” (37 percent) or “somewhat satisfied” (33 percent) with their current CRM system.

“I’m not surprised,” says Leary. “Small businesses feel they’re getting more bang for their buck. There are a lot more CRM choices for them today than there were a few years ago. [These products] are more affordable, easier to use and the subscription pricing terms are in line with what small businesses are looking for.”

Leary says this makes sense, as many midsize businesses experience growing pains related to company expansion, including difficulties scaling their technology. In addition, as growing organizations gain experience with CRM, they develop a better understanding of what they need it to do—which leads to a growing awareness of their current system’s limitations.

Also, according to Vellmure, “most tech solutions today are either built to solve the needs of very large organizations, or very small ones.”

According to Vellmure, this makes sense: “There are still millions of companies today [that] just need a centralized place to keep their data,” he says. “It's the lowest common denominator and the easiest value to realize.”

Conversely, he says that many higher-level strategic benefits, such as increased customer satisfaction and retention, are both more difficult to track and “dependent on many variables outside of the CRM system.” As a result, he adds, “It’s not surprising that they’re less realized across the spectrum of respondents.” 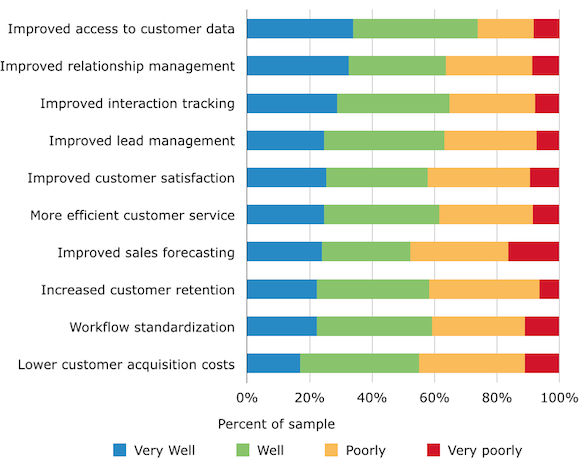 On the other hand, however, many users did say that their system delivered improved relationship management “very well” (33 percent) or “well” (31 percent). This is particularly encouraging given that managing customer relationships is typically one of the most important higher-level goals of implementing CRM technology, as it’s closely tied to revenue generation and growth.

Similarly, we presented respondents with a list of challenges that CRM users commonly face. Of these options, users most often said that they faced “major” or “moderate” challenges customizing their CRM system (56 percent) or integrating it with other key technologies (49 percent).

According to Leary, this is unsurprising, as many growing businesses come to find that built-in customization options such as custom fields and modules are not enough to satisfy the needs of their specific business or industry.

As he puts it, “The hard work now is consolidating and coordinating across systems, regions and currencies for the large vendors, or tying small legacy or proprietary systems together for the small companies, which will only be exacerbated as more and more data proliferates.” 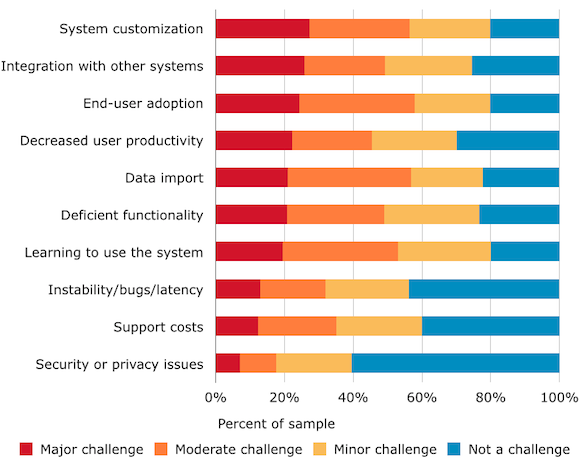 Many also said that end-user adoption was a major (24 percent) or moderate challenge (34 percent). According to Leary, this has been the case since the origins of CRM in the ‘90s. He suggests that companies consider implementing mobile solutions. “[Those technologies] leverage the passion people have for mobile devices with interfaces that make their jobs easier,” he says, adding that this, in turn, encourages adoption.

According to Leary—who notes the increasing popularity of cloud-based business technologies—this finding “shows how far [cloud-based] vendors have come [in] gaining the trust of the customers when it comes to customer information.

“Five or ten years ago, nobody was really willing to put their customer contact information in the cloud for fear of [security risks],” he continues. “But now, the government is doing it, the biggest companies in the world are doing it and the level of concern has gone down … companies understand that these vendors spend a lot of money on servers, redundant systems and security.”

Nearly Half of Users Access CRM on Smartphones and Tablets

As expected, laptops and desktop computers were still the primary means for most users to access their CRM system, with slightly more users using laptops (86 percent) than desktops (76 percent).

“The fact that laptops lead is not surprising at all,” says Vellmure, “since many CRM users are field sales reps who rely primarily on their laptops.” Similarly, nearly half of our respondents said they used smartphones (48 percent) and/or tablets (45 percent) to access their CRM system. And according to Vellmure, mobile CRM usage will continue to increase in the future.

Moreover, the vast majority of users (81 percent) say they access their CRM using multiple types of devices, with 20 percent using a combination of three of the aforementioned devices, and an impressive 29 percent using all four. 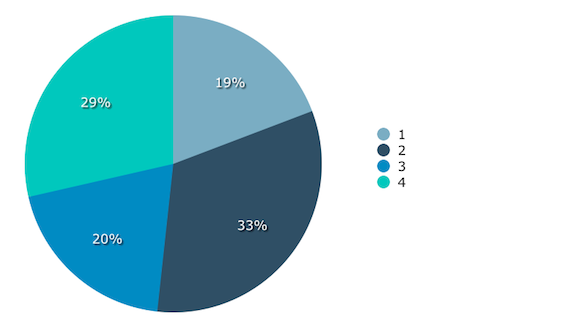 “The knowledge worker of today and certainly [of] the future will expect to use, and interact seamlessly on, all of their devices, depending on the context,” Vellmure says. “In response, CRM vendors are aiming to optimize the experience on each device, and improve the cross-device portability.” 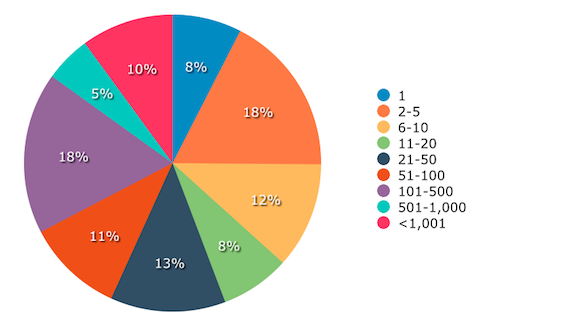 Our survey respondents represented businesses from a wide spectrum of industries, with manufacturing, technology and real estate being the most common at 21, 14 and 11 percent, respectively. Segments in the “Other” category included insurance, advertising and media, each of which individually constituted 1 percent of the sample. 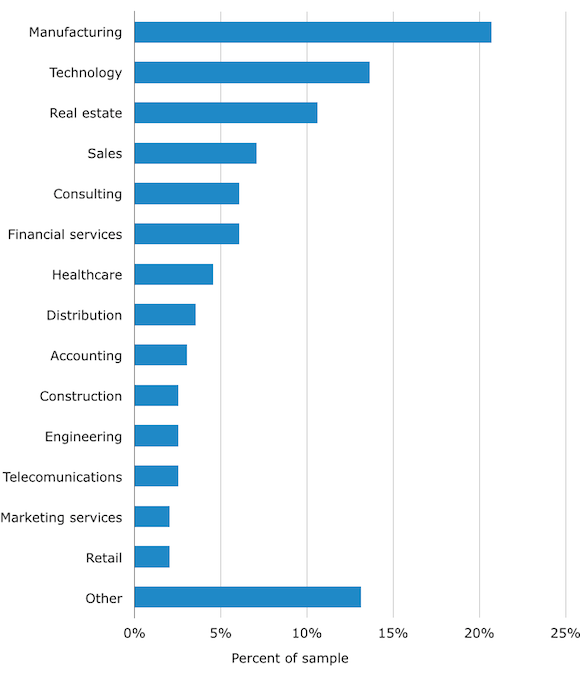 To collect responses for the survey, we used several approaches. We emailed survey invitations to CRM software buyers who contacted Software Advice for guidance in their software selection process. We also posted the survey on social networking sites, including Twitter, LinkedIn and Google Plus.

Finally, we contacted CRM software vendors and asked them to share the survey with their users. These included vendors Software Advice has an established relationship with, as well as those it doesn’t.