Most Buyers Are Replacing Existing Software 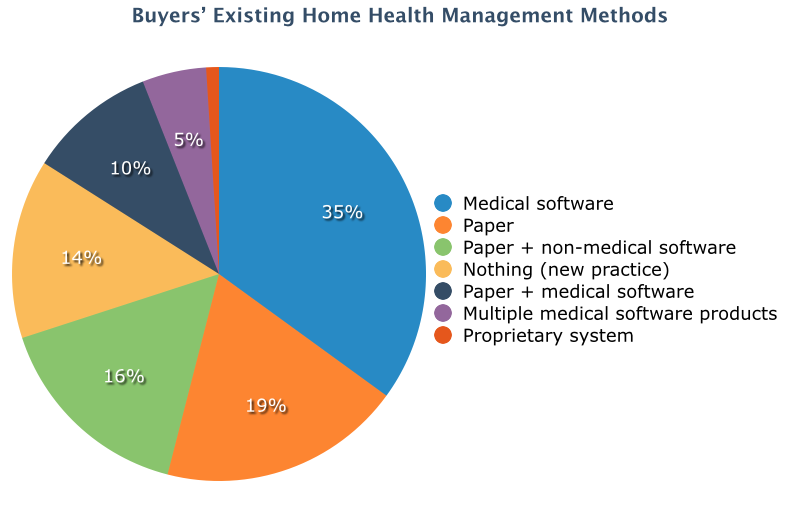 All told, only 33 percent of buyers were purchasing software for the first time. Nineteen percent were looking to digitize a paper-only process, while the other 14 percent were opening new agencies or practices and planned to go digital from the start.

Among buyers using existing software (alone or in conjunction with paper), the key reasons cited for replacing these solutions revolved around needing more robust functionality.

Thirty-five percent of buyers said their current solution was missing one or more features they needed, while 30 percent complained about their software being too slow, or too cumbersome—i.e. difficult to navigate and requiring too many clicks. 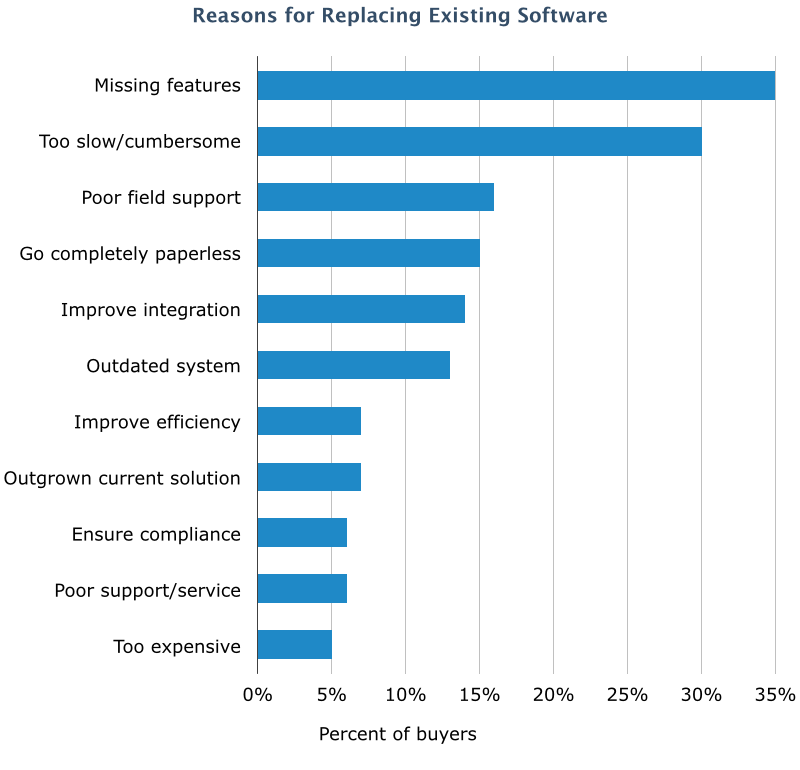 The vast majority of buyers replacing multiple software systems wanted to move to a single, integrated suite that met all of their needs, rather than using multiple products that met some needs but not others.

Thirteen percent of buyers replacing existing systems said they were doing so because their current software was outdated. These buyers mentioned wanting to “explore other options” rather than invest in updating their existing solution. This suggests dissatisfaction and low brand loyalty among these existing software owners—they’d rather shop around and invest in a new solution than maintain their existing system.

Field support was the most-requested feature mentioned by home health buyers, with 34 percent citing it. Buyers said they wanted to track employees (e.g. nurses) in the field, and for these employees to be able to access the software from mobile devices. 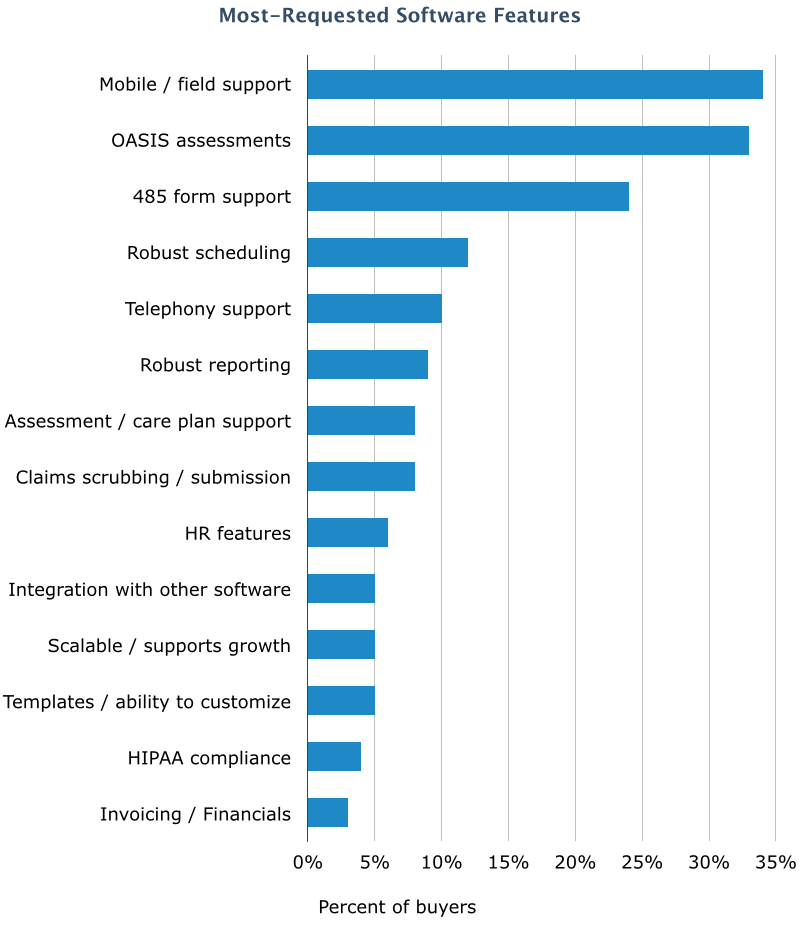 Among the 33 percent of buyers purchasing a software solution for the first time, the most common reasons for doing so had to do with the benefits of going digital. Fifty-eight percent of first-time buyers cited wanting their organization to be more efficient and/or more productive, while 35 percent mentioned the desire to eliminate paper, with more than one mention of “drowning in paperwork.”

Meanwhile, 29 percent of first-time buyers were starting new home health groups and looking to implement an electronic solution from the start. 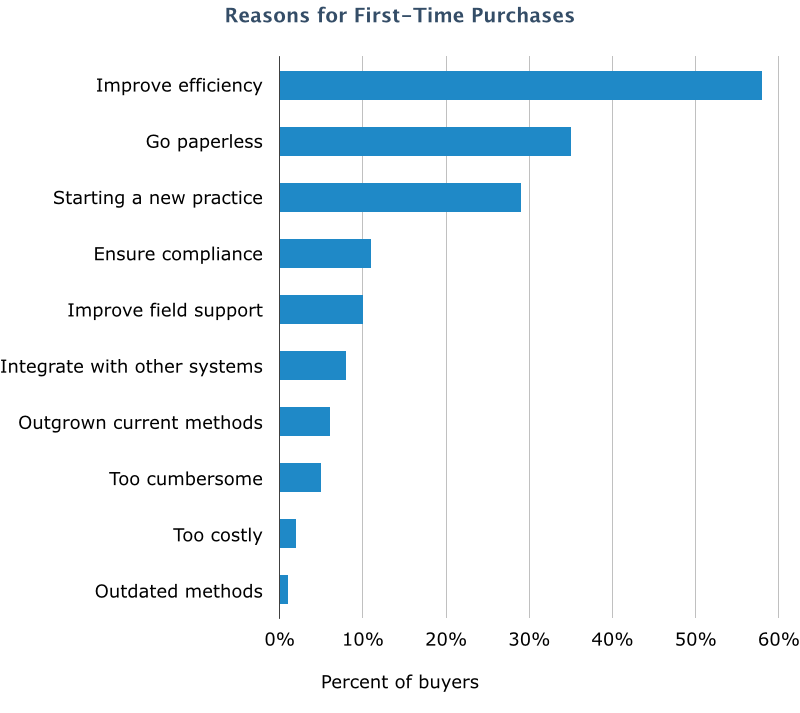 Most of the buyers we spoke with—69 percent—didn’t state a preference for Cloud-based systems or on-premise (client-server) systems. Among those with a preference, however, 97 percent favored Cloud-based software. 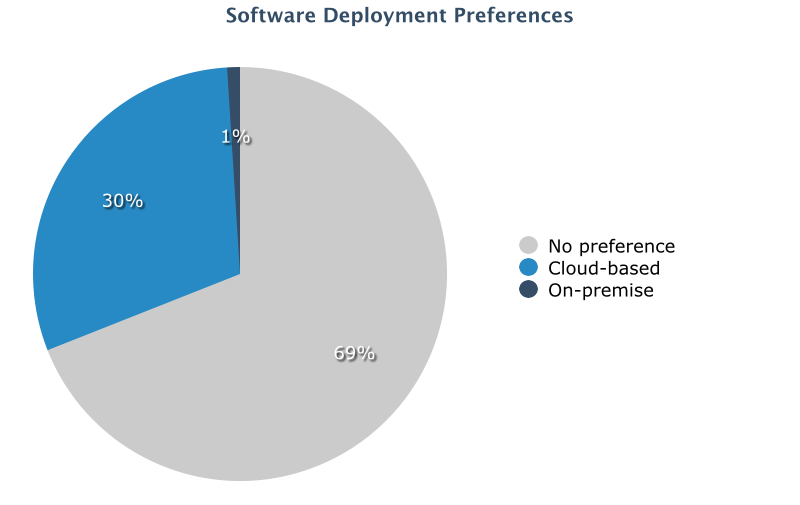 The overwhelming majority of the buyers we spoke with (95 percent) were interested in a single, integrated solution offering multiple applications. This aligns with our finding that buyers replacing multiple existing solutions wanted to transition to a single system.

Buyers seeking integrated suites were primarily looking for billing and scheduling: 94 percent of buyers requested scheduling, while 88 requested billing. (Remember, there is a high potential for overlap here because buyers wanted both of these applications in a single software solution.)

Another 64 percent of buyers were interested in a point of care solution, while 9 percent wanted accounting. A small proportion of buyers also sought peripheral support, such as human resources (8 percent) or customer relationship management (2 percent).

Our buyers primarily represented the smaller end of the market—55 percent of organizations employed 20 or fewer full-time employees, while 69 percent cared for 100 or less patients. That said, we did encounter buyers from organizations of all sizes, with 13 percent from groups with over 100 employees and 7 percent representing organizations with over 400 patients.

In 2013, Software Advice spoke with 1,274 home health organizations seeking new software for their agencies. We randomly selected 385 of those interactions to analyze in compiling this report. To further discuss this report or obtain access to any of the charts above, feel free to contact me at melissa@softwareadvice.com.