Product Overview
User Reviews
Comparisons
Alternatives
SkillPort is a cloud-based learning management solution offered by SkillSoft. The solution is used by businesses of all sizes across industries such as financial services, health care and manufacturing. Users can browse through the catalog of materials based on topic, role or function. The solution offers customized learning recommendations, focused topics and learning plans for learners. Featured contents based on user interests are highlighted in the home screen. Advanced search options such as full-text search across contents are available. Users can organize and bookmark preferred courses. Automated notifications can be sent to employees about newly added contents. The solution supports AICC and SCORM e-learning standards. Reporting tools are offered as we...
Close 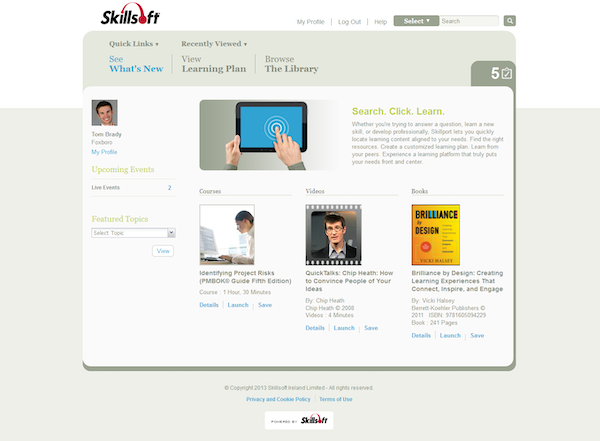 I provide access to SkillPort training for my candidates in order to improve their technical skills.

It has solved the issue of having all employees having access to extra training so that they can improve their skills or build new skills. It is also cost efficient since it is not possible to send every employee to outside training's. It also has allowed my employees feel that I am here for them and wanting them to succeed which I do.

Skillsoft is a great product with a variety of topics one can learn on. It allows you to build up your skills and resume with the variety of courses one can take. It also has test one must pass to make sure that the material was learned from the course. Upon passing you are given a certificate of completion which is great to store and have on file in case ever asked. Its great that it shows all courses in your profile that you have completed and it allows you to save courses to do at a later date. this allows me to construct my own path of courses I want to take. It also has topics you would have never thought about which is great to learn off of and improve your skills whether you are already in s supervisors/managers position or striving to achieve a new position.

There is nothing that I dislike about skillsoft it is a pretty awesome tool for an organization.

Compliance Training is so easy with this Percipio. All new hires that are set up automatically get the required compliance training that is crucial in this day and age.

This product has so many options to offer as it relates to training, compliance. A great LMS tool and the customer service is outstanding.

In the beginning it was a little intimidating learning how to navigate and set up employees. As time has passed, it has definitely gotten much easier to use.

Reasons for switching to Skillsoft

Felt what Skillsoft had to offer was much better suited to the size of our company and where we wanted to take the training.

The experience has been great, overall I would recommend it to other outside of our school. I use this training as well myself to keep myself up to date.

Having the ease of access that this software provides is very helpful to our student, especially the ones that are making a career change.

There has been outages, luckily it is not frequently. The issue is that when one thing goes out, after it is fixed the other goes out. For example, once the lab outage was fixed, the videos went into an outage as well. Again, this is not frequent. We have not had an outage in about 2 years.

Legacy LMS that was really a Content Portal turned LMS

If you have purchased the Skillsoft catalog, and you are getting SkillPort as an addon for no additional cost, then it is fine to use and perhaps less problematic than asking Skillsoft to make their catalog available to another LMS. Otherwise, avoid. There are many other LMS and learning portal options that are better. Many of them for free.

Surpringly, the one feature I can vouch for in the system was the ability to update eLearning content without de-registering users or causing them to lose progress in their courseware. I have seen several systems where this is not the case.

Skillsport seems to be an LMS that was built around the fact Skillsoft offered a large content catalog, and needed to offer tracking, and also had to allow companies to upload their content into that portal because customers wouldn't want an LMS for just Skillsoft and the expense of a second system for their own content. As an admin of the system converting over from an LMS (which they acquired), it was a very clunky system to user as an Admin as well as a user. The UI on the Admin side looked like a Windows 3.1 application (the user side was a bit better, but still dated). The basic setup of any course was overly complex, taking more steps than was truly required. The reporting was extremely weak. There was raw score and pass/fail, but no question-level analytics.