Product Overview
User Reviews
Comparisons
Alternatives
TextMagic is a cloud-based bulk SMS service for small and midsize businesses that is able to send notifications, alerts, reminders and promotion messages via text messages. The web interface allows businesses to upload contact lists and send messages to customers, employees, stakeholders or even to general audience participating in promotional campaigns. TextMagic offers an SMS gateway API to integrate with websites and add text messaging capabilities to daily workflows. A two-way chat messenger feature enables staff and employees to communicate via text messages. The solution is also able to convert emails into text messages and deliver them as SMS. A mobile app for iOS and Android devices enables users to manage contacts and send messages from their smartpho...

Simple SMS Pricing for Business. Price per text varies depending on destination country. No hidden fees, no surprises. Pay only for outbound text messages. Inbound SMS is FREE. 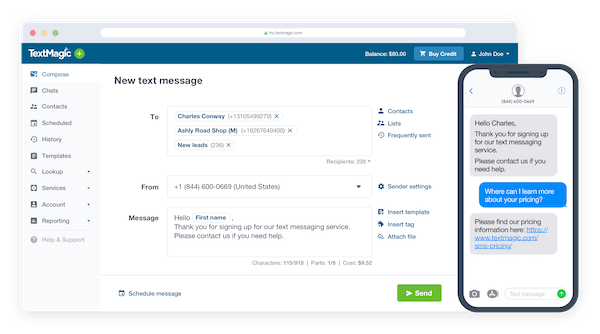 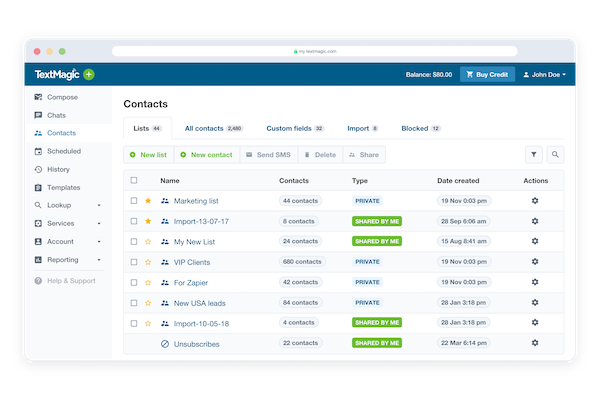 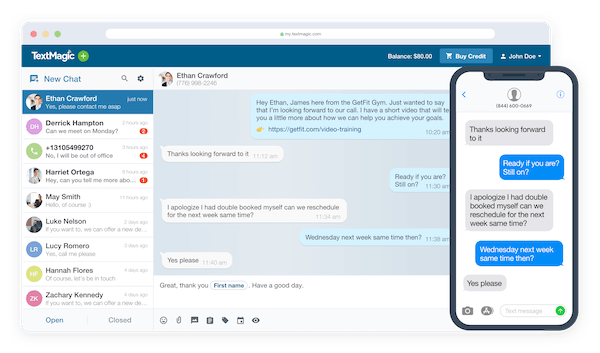 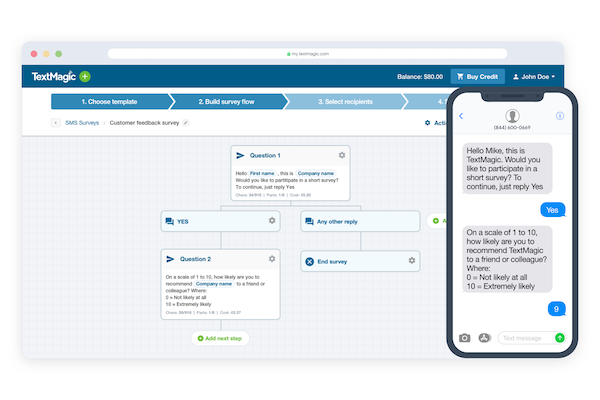 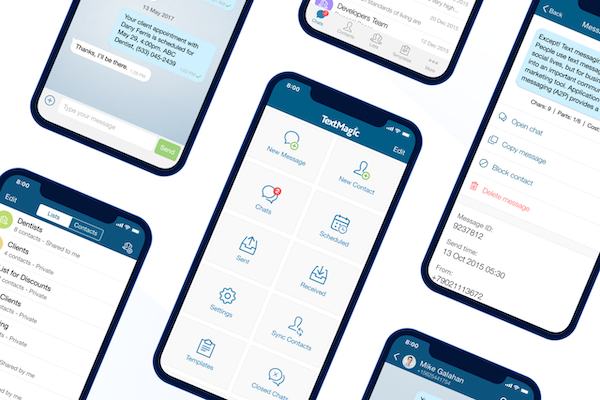 A complete business texting solution that enables you to quickly and cost-effectively send texts online from the web.

TextMagic is there when others aren't

It was August 28th, 2017. Hurricane Harvey had landed in Houston and was causing a record amount of flooding. People were dying, and thousands were still trapped in their homes. I made a simple website for my buddy's church, so his friends could keep track of all of the parishoners that needed rescue. The website quickly went viral however, and soon the entire city was using it as a way to track the rescue cases. Rains continued to pound Houston, and what started as a simple website that I made in 6 hours now was literally the only thing standing in the way of death for thousands of people still trapped by the rising floodwaters. We had a problem, though. Some of the people were getting rescued but not being marked "SAFE" on the site. This resulted in wasted resources, as rescuers would would go to a house and find nobody there, the homeowner having already been rescued hours earlier. We had to come up with a solution to this problem. Luckily, we had all of their phone numbers, so we decided to text them all. It was 2 AM in Texas, and I needed to have it done overnight because we were expecting more waves of signups in the morning. I tried Twilio but nobody answered the phone or replied to my urgent messages. Luckily, TextMagic picked up the phone and I got a working account in minutes. We sent out thousands of SMS overnight. TextMagic was there when others weren't. We ended up saving 25,000 people that week, a number which would have been smaller if not for TextMagic.

I couldn't tell at first glance, by looking at the website, if it was ready for enterprise solutions or not

Not getting notifications that a message wasn't delivered is a detriment to Text Magic and my ability to do my job effectively. Our text message program with our customer base is pivotal to success within my company so it's vital to know if messages are reaching my customers.

Ease of setting up and using templates!!

Unnecessary feature - The email notifications that someone unsubscribed to your messages. If I get a text that says "STOP" from the person sending it, then I don't need an email telling me that they sent a message saying STOP. It's redundant & unnecessary. Necessary/needed feature - You really need to develop an email notification when a text message is undelivered. I've sent several messages that were undelivered and I only discovered that they weren't delivered when I checked my history for a completely different message. 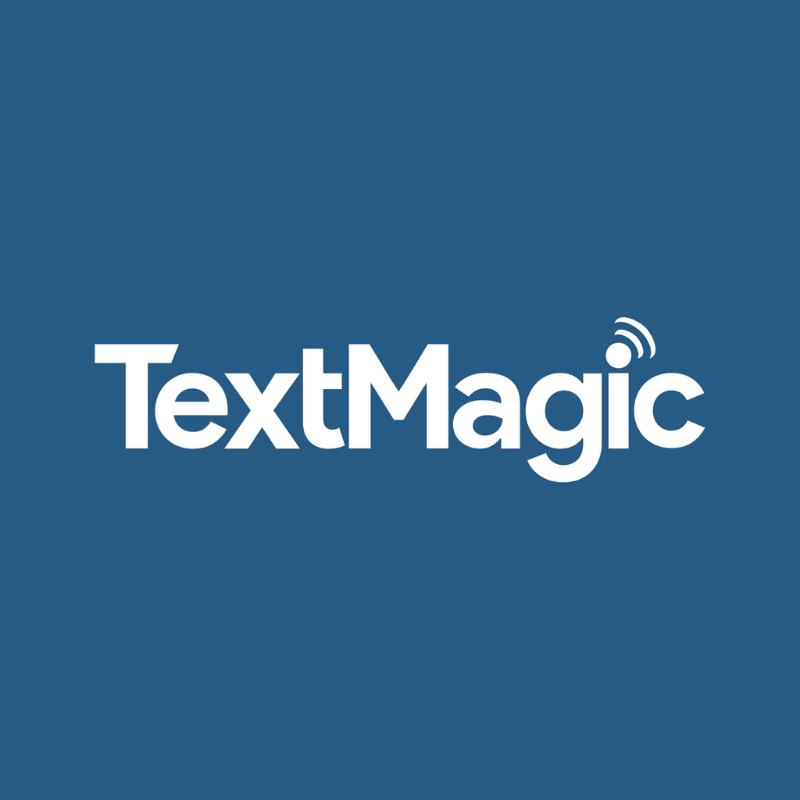 Thank you for taking the time to share your review. We highly value our customers and their feedback. We are sorry to hear that our unsubscribed recipient notification is not useful for you. For your information, all email notifications can be modified under your account settings. To improve this feature, we will add the "Unsubscribe" option to our sent notification email so that you can turn off this notification with a single click. Unfortunately, we do not send an email for each failed message due to limited server resources. We recommend that you keep track of the delivery rate via TextMagic Web App by checking the message status in History or checking the overview under Reporting. You can also enable a notification to receive a daily report of your messaging statistics and go to your message history with a single click. Should you have any delivery issues in the future, please do not hesitate to email us: support@textmagic.com.

Communication to our employees is very important and with them not in the office, we needed a conduit from our office, directly to them, for fast messages to get out to all. We are overall pleased with this program and will enjoy every new update they make in the future as it can only get better.

We started using the software as the need to get in touch with our truck drivers is paramount in our industry. This is a great way to do this in theory. I like the ease of use and options to organize the driver phone number list. It gets the messages out to them. I had a minor set up problem when we first started and discovered the number I picked on the list did not work and my messages were not going out to all employees. Customer service chat was very helpful and they reimbursed the amount in our account for the charges and corrected the phone number issue I had.

As with any program, maintaining the information in it is most important. If we do not keep the contacts current, mass texting may go out to contacts who are no longer with the company. And your information will not go out to everybody who needs it if they are not entered in when first hired. We have a high turnover rate so it is another list we have to take care of. Currently Text Magic will only allow for one administrator to control all lists and manage. My company has need for more than just one administrator. So we share one log in right now. The last minor issue we have is the option for our employees to opt out of the texts. It hasn't happened but only once but it does and will again, sooner or later.

My coworker and I liked what we read online about the texting. It allowed us to get a message out to the drivers but didn't allow the drivers to talk back and forth on the same message. Only back to the office.

TextMagic: Communicate Directly With Your Audience

I love the fact that their SMS delivery rate are almost at 100%. The SMS length calculator is very useful and helps in saving costs. Their pre-build SMS templates are very useful and helps save time and copy-writing efforts. Best of all, the multiple numbers from which the SMS can be sent, if not the most sought Custom Sender ID, for optimal branding.

I would appreciate that the prices get lower, or packs for unlimited SMS's for a day for example, were available.

Very relyable software for sending SMS through e-mail, we endorse it to all our customers.

It would be better if they where better known in Europe, than it would be easier to recommend it to our customers. For the rest not a single thing. It does what it has to do without unneccesary options.