Software Advice talks regularly with medical offices looking for the right practice management software for their practices. This provides us with unparalleled insight into the needs of these software buyers. We recently analyzed a random selection of 385 of these interactions from 2014 to uncover physicians’ most common pain points and their reasons for purchasing new software. 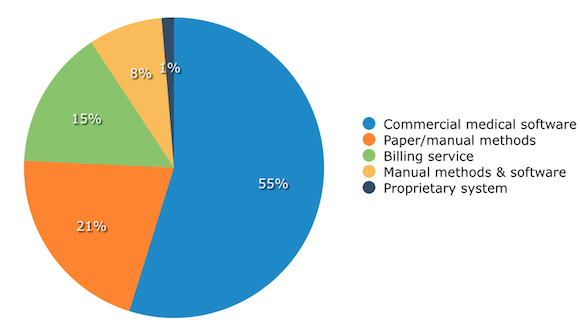 Another 15 percent of buyers indicated they were currently outsourcing their medical billing to a billing service. In many cases, these buyers were looking to bring their billing back in house, citing the desire to save money, gain more control over the process or, in some cases, even improve first-pass acceptance rates. Another handful of buyers had created their own proprietary software systems that they wanted to replace with a commercial product.

The most common reason buyers cited for wanting to replace an existing practice management or billing system was that they weren’t confident their current system would be ICD-10-ready in time for the October 2015 switch to the new code set. Indeed, nearly one-quarter of buyers replacing software cited compliance concerns.

In addition to ICD-10 concerns, buyers also talked about the need to be prepared for the new Centers for Medicare and Medicaid Services (CMS) 1500 claim forms that went into effect April 1, 2014. There were also several references to meaningful use—the government program that offers financial incentives to physicians who adopt certified electronic health record (EHR) technology—which isn’t technically a regulation, but is often interpreted as such, since a lack of compliance will ultimately result in monetary penalties. 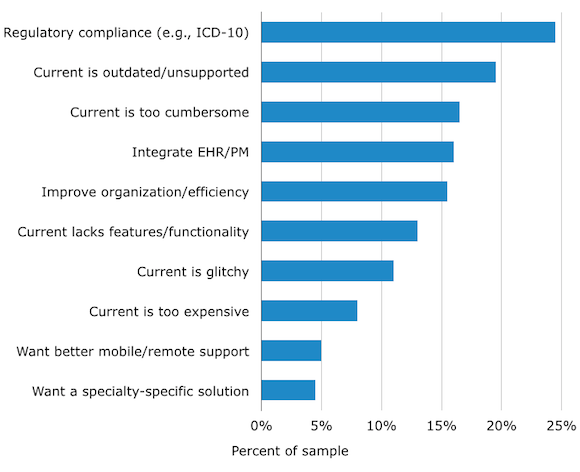 Another common reason for replacing their existing systems, given by nearly 20 percent of buyers, was the system being outdated; in some cases, it was no longer being supported by the software vendor. Additionally, many (17 percent) complained that their current solutions were too cumbersome: taking too long to complete standard tasks, requiring too many clicks or being difficult to navigate.

All told, the reasons buyers gave for wanting to replace existing software varied widely—there was no single, common reason uniting the majority.

Among buyers purchasing practice management software for the first time, we saw much more consolidation around purchase drivers. The majority of buyers (70 percent) cited a single, common desire: to improve organization and/or efficiency.

Though somewhat vague compared to the reasons buyers gave for replacing software, the need to become more organized and efficient is one we commonly see among software buyers in many markets, both medical and otherwise.

Here, too, we saw a fair amount of mentions of wanting to be ready for ICD-10: nearly 25 percent of first-time buyers mentioned this. Other common reasons for first-time purchases were mentioned by much smaller portions of the sample; the overarching drive common to most first-time buyers was a general one to improve operations through the automation and streamlining that comes with software adoption.

We should note that most buyers—69 percent—did not express a deployment preference. However, among those who did explicitly request a certain type of deployment, the vast majority (88 percent) wanted to evaluate Web-based systems. 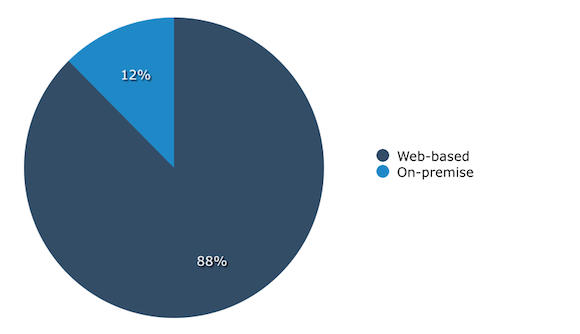 I’ve conducted a number of analyses among medical software buyers; looking at practice management software buyers exclusively was the first time I’ve seen a recurring theme of practices calling out their current on-premise set-up as a pain point. Multiple buyers mentioned not wanting to maintain their own servers, or problems with their local servers leading to inaccessibility of their existing on-premise practice management tools. 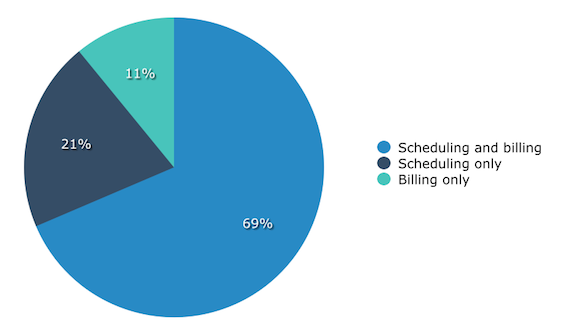 It’s worth noting that many of the buyers seeking integrated billing and scheduling also mentioned wanting their practice management software to integrate with charting, in the form of an all-in-one EHR/practice management system. In fact, EHR integration was one of the most commonly requested features among the buyers we spoke with.

When asked what features or functionality they needed in a practice management system, close to 40 percent of buyers in our sample said they wanted the system to include an integrated EHR.

It should be noted that this figure does not include buyers who currently have an EHR system, and want a new practice management system to integrate with that existing software. The percent of buyers in the latter category was so small that “integration with an existing EHR” didn’t make the top-requested features list. Instead, the “EHR integration” category represents buyers seeking a brand-new, all-in-one practice-management-plus-EHR solution. 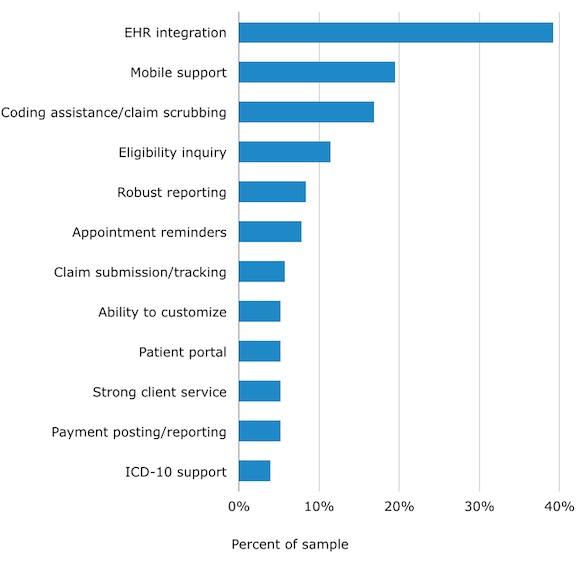 Mobile support was another important feature, mentioned by nearly 20 percent of our buyers. For the most part, buyers specifically mentioned wanting to operate their practice management systems on an iPad or tablet; however, there were occasional references to smartphones, as well.

The next most commonly requested features were unique to the billing application within a practice management suite: coding assistance (automated suggestions or checks for CPT and ICD codes) and claim scrubbing (the automated validation of the codes used before submission to payers).

Nearly half of the buyers we spoke with were practitioners—usually physicians (33 percent), but also other non-physician practitioners, such as nurses or physician’s assistants (13 percent). Nearly 40 percent of buyers had a more administrative role, including practice administrators and office managers (22 percent) as well as practice owners or directors (17 percent).

The buyers in this sample came primarily from small, private practices, with 54 percent representing solo practices and another 32 percent coming from practices with between two and five doctors. The buyers represented a wide variety of medical specialties; however, mental health and chiropractic practices comprised a notably large share of the sample (25 percent and 16 percent, respectively).

To create this report, we randomly selected 385 of our phone interactions with medical practices seeking project management software during Q1 2014. If you’d like to further discuss this report or obtain access to any of the charts above, feel free to contact me at melissa@softwareadvice.com.