The Impact of the HITECH Act on EHR Implementations
IndustryView | 2013

Since 2009, Software Advice has gathered data on tens of thousands of practices looking to purchase electronic health records (EHR) software. We’ve tapped into that data to determine the primary reasons practices were buying a new EHR in 2010, and how that's changed in 2013.

To achieve an effective comparison, we gathered data from two separate time periods within three years: Q1 2010, immediately after the HITECH Act was first signed into law, and Q1 2013. In this report, we discuss our findings. A detailed description of our methodology is provided later in the report.

Buyers generally cite one of four reasons for purchasing an EHR:

Perhaps the most telling result of this report is that 31.2 percent of medical providers are replacing old EHRs today, compared to 21.0 percent three years ago: a 48.6 percent increase.

Detailed breakdowns of the reasons providers were looking to replace an existing EHR in both 2010 and 2013 are provided below. 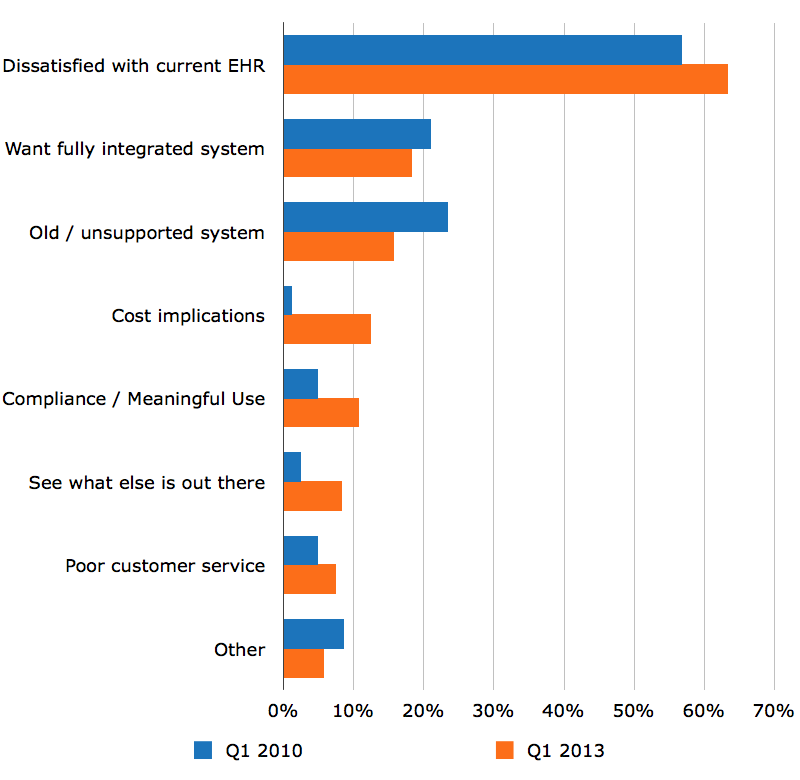 Dissatisfaction with Vendors Goes Up 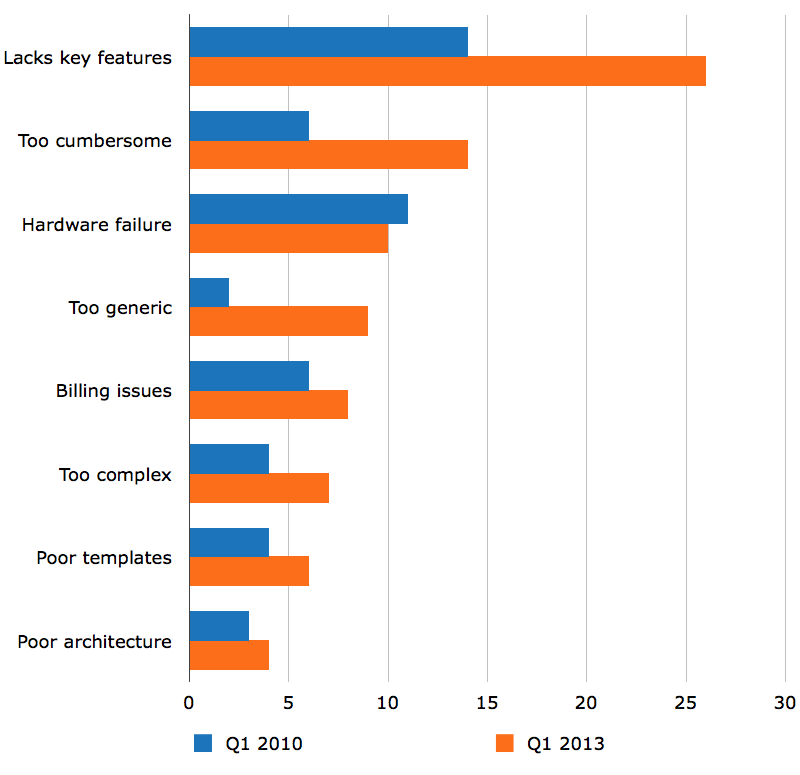 In 2010, only one person said that cost was one of their primary reasons for replacing their EHR. By 2013, that skyrocketed to one out of every eight buyers. Half cite forced upgrades (and an unwillingness to pay the associated costs), and most mention frustration at being “nickeled and dimed,” or that they had not been made fully aware of what to expect on the final invoice. This, along with customer service concerns (which grew by half), indicate a dissatisfaction with the EHR vendor, if not with the particular product.

Altogether, almost three-quarters (74.2 percent) of respondents replacing an EHR mentioned one of these concerns in 2013, compared to 58.8 percent in 2010. And this doesn’t include people who mentioned “looking to see what else is out there”—people who aren’t necessarily unhappy with their EHR, but aren’t happy with it, either—which grew by 232 percent.

Since we’re paying special attention to failed implementations, it bears pointing out that in 2013, four buyers specifically mentioned replacing something they bought less than three years ago. However, similar comments were made in 2010, indicating this could already have been a common occurrence on which the growth in EHR purchases had little or no discernible impact.

The biggest drop from 2010 to 2013 occurred in the area of old/discontinued software, with 23.5 percent citing this as a primary reason for replacing their EHR in 2010, compared to only 15.8 percent in 2013. This could imply greater stability in the marketplace, but since the absolute number stayed the same—the percentage  dropped because the number of people replacing EHRs went up—it could also be that software is being discontinued at the same rate while other reasons for replacing EHRs go up.

The change could also reflect the data collection period: of the 19 buyers who replaced an EHR for this reason in 2010, 14 were using MediNotes, which Eclipsys had just discontinued. Major events like this could skew the results considerably. However, Allscripts discontinued its MyWay product in Q4 2012, which had a similar effect on the 2013 results.

The percentage of all EHR buyers who reported opening a new practice was more than a third higher in 2013 than in 2010 (16.4 percent, compared to 12.2 percent). Although 4.2 percentage points puts this result within the five percent margin of error for this study, it’s consistent with what we would expect in a market moving toward electronic records.

The overwhelming reason given by these providers for purchasing an EHR was that they wanted to start off paperless. We expect this trend to continue as more doctors who grew up in the computer generation open their own practices.

Because of how we gathered this data in 2010, more than half of all respondents failed to provide a reason why they were looking to replace paper records with an EHR. This limits the number of claims we can make about this data, though we can still use it as a means of ranking the reasons most often cited by buyers. Interestingly, qualifying for stimulus funds did not appear to be the major driver of EHR purchases in 2010. In direct mentions, it ranked only sixth, with the more prominent reasons reflecting a genuine understanding of the benefits of a paperless office.

It’s worth noting, however, that there were 23 additional mentions of CCHIT certification, plus three who said “it’s required”—presumably referencing (though misrepresenting) the HITECH Act. These 26 respondents did not specifically state that qualifying for stimulus funds was the primary reason for making the switch, but if we were to add all of these respondents into the “qualifying for stimulus funds” category, the result would put this reason into first place. Though this would be purely assumptive, it does show that a desire to qualify for stimulus funds affected purchases at least on some level. 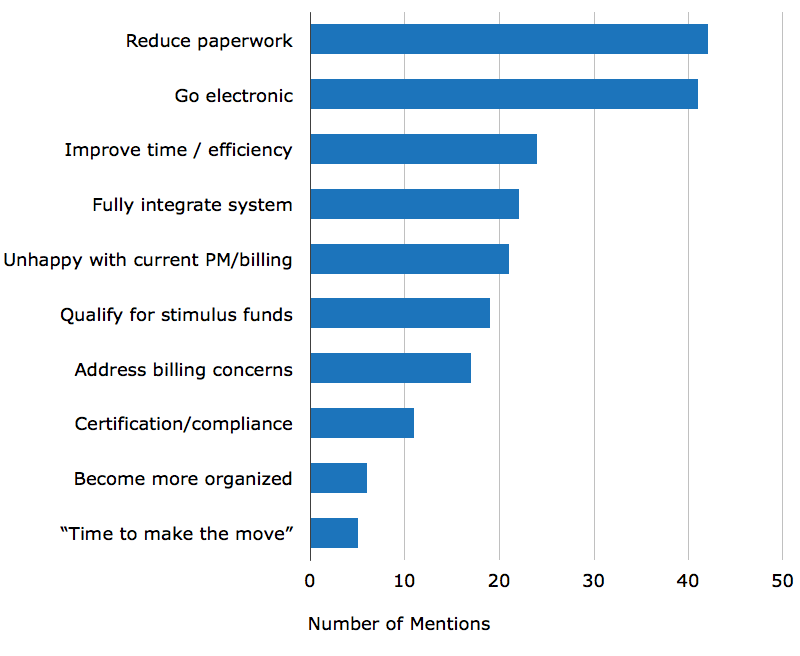 In 2013, the top reasons for switching from paper records to an EHR were a desire to reduce paperwork, go electronic and/or improve time/efficiency/organization. More than three quarters (77.6 percent) of respondents mentioned at least one of these reasons; almost half (46.9 percent) mentioned two or more of these.

Stimulus funds did show a significant drop in 2013, falling to seventh, from 8.2 percent of reasons given in 2010 to 5.4 percent. This is not surprising, given that we’re already well into the reimbursement period. Presumably, most organizations for which stimulus funds are a priority have already made the switch. Although it may drop further in the next year or two, we expect to see it rise again starting in late 2014 and run all the way through the latter part of the decade, as Medicare penalties begin to kick in and become more severe.

There’s also a strong undercurrent of inevitability running through these results: 15.8 percent of respondents simply said, “it’s time to make the move,” or words to that effect, indicating that, since so much of the industry has already made this switch, there’s no point in delaying it any longer. 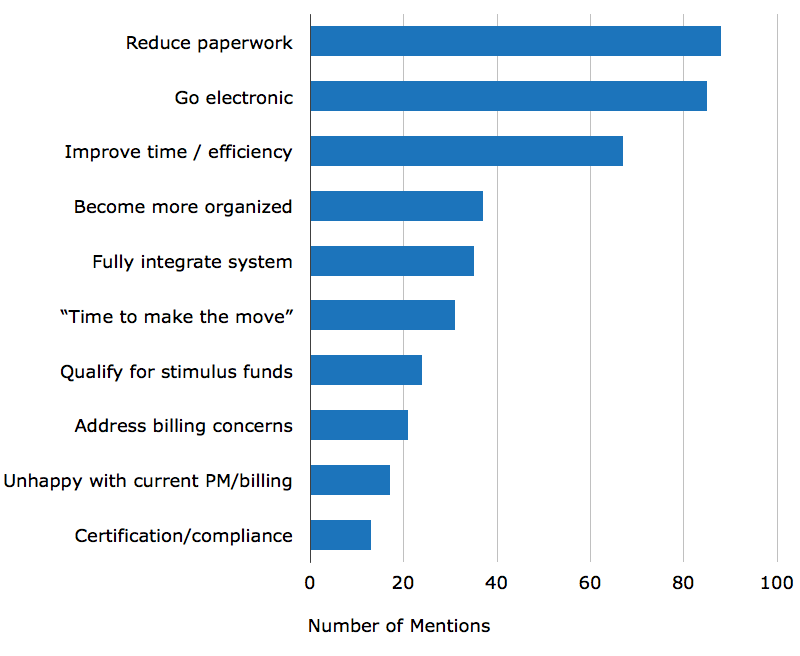 This report was based on data that came from prospective buyers of EHRs qualified by Software Advice analysts during the first quarters of 2010 and 2013. Participants were randomly selected based on the following process: Individuals either called in or filled out a Web form requesting information about EHR software.

These individuals were qualified over the phone, using a specific set of criteria to determine their likelihood of purchasing an EHR within the next year. Part of the qualification process involved asking questions about the prospect’s reasons for wanting to purchase an EHR. These remarks were documented and formed the basis of the data set with which this analysis was conducted.

Individuals determined to be unlikely to purchase an EHR within the next year were excluded. Since we were looking at electronic records, buyers looking only for practice management software, billing software, or another modular piece of EHR software were also excluded. From each data set, 385 buyers were randomly selected to be included in this report, giving us a five percent confidence interval (95 percent confidence level) for all EHR purchases nationwide.

Although we’ve taken great care to make this study as relevant and statistically significant as possible, two major factors limit its efficacy.

Almost all of the individuals we qualified discovered our site through an Internet search and then consented to a 15-minute phone call discussing their EHR selection process. This may skew the results toward buyers who are more technologically savvy, as well as to those who are uncertain as to which product they are going to buy. Buyers who rely exclusively on referrals from colleagues to make their EHR purchase decisions, for example, were not likely to have been sampled.

In the 2010 data, 25 buyers made no specific mention of what they were replacing. Based on context clues, we assumed that 24 were replacing paper records and one was replacing EHR software. In addition, many people in 2010 did not provide the exact reason they were replacing paper charts. Out of 218 providers in this category, more than half (112) gave no reason for purchasing an EHR. This was corrected by the time we conducted our 2013 surveys, but leaves us with half as much concrete data for 2010. Excluding these individuals would have skewed the results, so we chose to include them with a mention of the data limitation.

We want to emphasize that this study points to the importance of having a reliable plan for assessing software and its vendors before buying and should not be construed to discourage potential EHR buyers from going ahead with their purchase. Not included in this survey sample are the countless successful EHR implementations: buyers who purchased an EHR and absolutely love it; or practices for whom the savings in time and efficiency were well worth the costs of the software and the transition. These practices, by and large, carefully considered all their options, assessed the viability of the vendor, and reviewed the software until they were 100% certain they were making the correct decision. Take these steps before buying your EHR and it will be many years before you end up having to replace it.