In March 2013, Software Advice published a market share analysis highlighting the top vendors selling EHR software to mental and behavioral health providers in the U.S. That report was based on meaningful use (MU) attestation data from eligible professionals specializing in psychiatry through the end of 2012.

The latest MU data is regularly made available online by the Centers for Medicare and Medicaid Services (CMS), and that data is now up to date through the end of 2013. As such, we’ve decided it’s time for an update on the mental health EHR market.

EHR vendor market share is notoriously difficult to pin down, for reasons expounded on in the Methodology section. Although MU attestations are not the same thing as market share, we believe the two are closely correlated. If a practice is attesting to “meaningful use” of a system, then their EHR is presumably doing its job. As such, we think MU data can provide a valuable assessment of the current state of the market for mental health professionals evaluating available software options.

In 2012, 642 unique eligible professionals specializing in psychiatry attested to meaningful use of a complete EHR. (A “complete EHR” is one which meets all MU requirements with a single product—as opposed to a “modular EHR,” which will meet some, but not all, MU requirements, and must be used in conjunction with other EHR modules in order to qualify for MU.)

In 2013, a total of 1,101 eligible professionals specializing in psychiatry attested to meaningful use of a complete EHR: a year-over-year increase of 71 percent. The Affordable Care Act (ACA) is likely responsible for some of this increased volume: EHRs are often necessary to support new models of care (such as Accountable Care Organizations, or ACOs) born of the ACA’s mandate to reduce costs and improve care quality.

Just as the number of providers attesting to meaningful use increased in 2013, so did the number of EHR products being used for attestation. In 2012, there were 64 different vendors providing complete EHRs who could claim at least one MU attestation from an eligible professional in the field of psychiatry. By the end of 2013, that number had risen to 81 vendors.

Some of these additional vendors may be new to the EHR market entirely, but that’s not the only possible reason behind the increase. Some vendors’ software may have been in use in 2012, only users hadn’t attested to its MU yet. Still other vendors may provide software for a variety of specialties, and their products simply weren’t being used by psychiatrists for MU yet in 2012.

The EHR market is notoriously fragmented, with hundreds of vendors providing products to medical professionals in various specialties. However, the mental health segment is slightly more consolidated than the market at large: the top vendor, Epic, holds more than 35 percent of the mental health market.

Epic doesn’t cater solely to mental health; the company makes an EHR product that can be used by just about any medical specialty in practices or hospitals of just about any size. In fact, Epic is the dominant player in the healthcare market as a whole (though its share of the overall market isn’t quite as large as that of the mental health field).

Several other vendors in the top 10 also make products that can be used by multiple specialties: Practice Fusion, Allscripts, GE, eClinicalWorks, NextGen and McKesson. Among the top 10 vendors, only ICANotes and Valant create products exclusively for the mental health market.

We should also note that the number four vendor by meaningful use attestations is Partners Healthcare System (the Massachusetts health system behind Massachusetts General Hospital and Brigham and Women’s Hospital). Partners developed its own in-house EHR system years ago, which some Partners providers still use today. This accounts for continued MU attestations for Partners Healthcare System—despite the fact that Partners adopted the Epic system at many of its facilities in 2013.

The charts below illustrate meaningful use market share in the mental health space today versus one year ago. 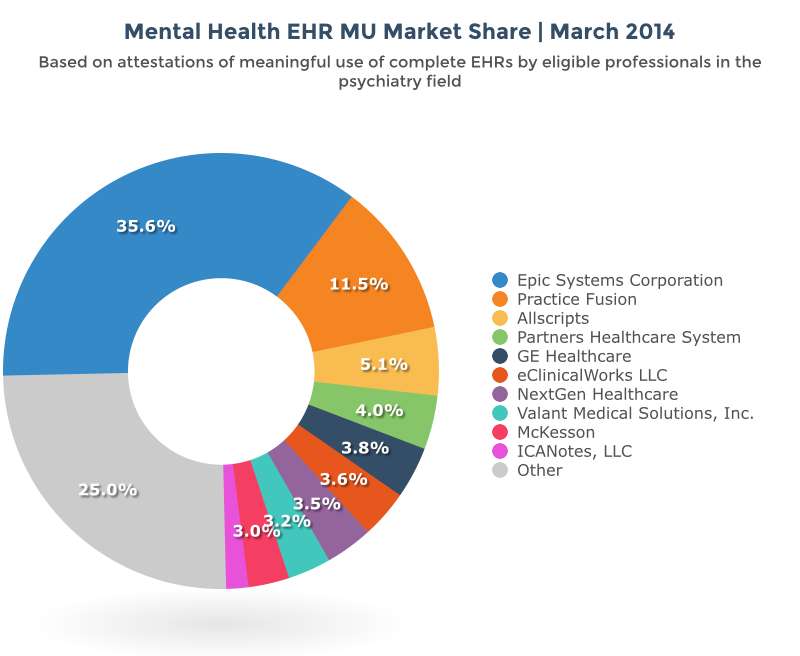 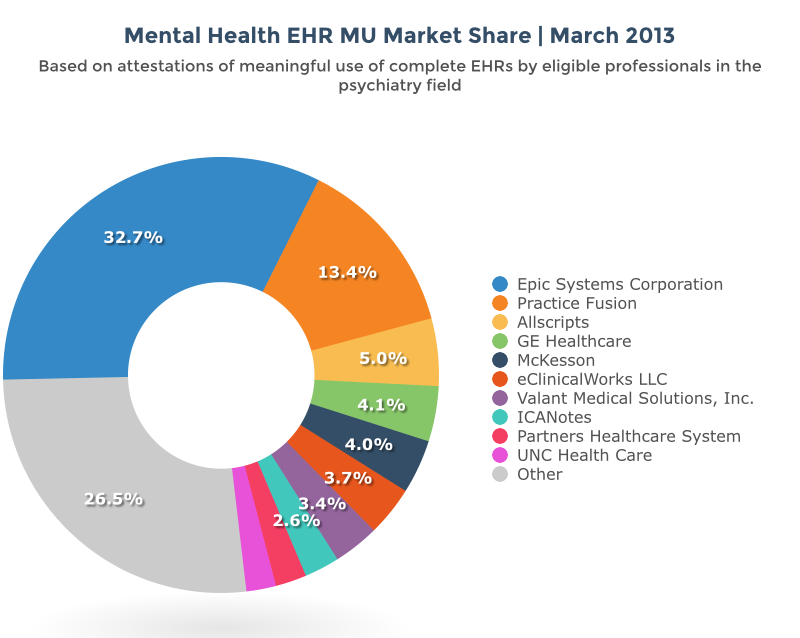 EHR vendor market share is difficult to come by. Admittedly, using meaningful use attestations as a surrogate indicator of market share has limitations. But we think it’s one of the best available representations of market share.

Sales data for most EHR software vendors is not publicly available. What’s more, vendors tend to define their users differently. One vendor may consider “users” to be any individual who uses the software (which could include administrative staff); others may only consider only physicians as “users;” and others count the number of practices rather than the number of individual users. This makes an apples-to-apples comparison of customer volume difficult. The EHR Incentive Programs for meaningful use, on the other hand, provide a standard, non-varying definition of “eligible professionals.” Looking at the number of eligible professionals who have attested to meaningful use with each vendor allows us to judge vendors by uniform standards.

One challenge presented by the MU dataset is that many eligible professionals have now attested to meaningful use more than once (e.g., once for Stage 1 and again for Stage 2). In its original form, the MU dataset includes multiple entries for such providers—one entry for each attestation. We identified and removed duplicate provider entries so that each unique provider was counted only once for this report.

Finally, note that because psychologists, therapists and certain other behavioral health specialists don’t qualify for MU reimbursements under the EHR Incentive Programs, these professionals have not been included in this analysis.