Telemedicine and telehealth services, in which medical visits are conducted via software on a secure videoconferencing platform, can help increase provider efficiency while providing a convenient service to patients.

To learn how providers can use this technology to better serve patients, Software Advice conducted a survey gauging public interest in virtual medical visits as a tool for diagnosing and treating minor illnesses.

As videoconferencing and remote monitoring technology continues to advance, telemedicine is increasingly becoming a part of routine medical care. Studies suggest that the number of patients taking advantage of telemedical offerings will increase twentyfold over a five-year period: from 350,000 users in 2013 to 7 million in 2018. Rapid market growth is predicted to follow, potentially reaching $2 billion in revenue by 2018.

This new technology may also offer significant cost-savings over traditional care models. According to the American Medical Association (AMA), telemedicine can save between $300 and $1,000 per year in claim costs, depending on the size of the family being covered.

Telemedicine can also help reduce the number of patients who miss appointments due to transportation issues or work conflicts, resulting in additional revenue for overbooked primary care physicians.

Most of the patients in our sample (73 percent) say they have never participated in a telemedical visit, while another 18 percent have done so within the past 12 months. Six percent of patients say they used telemedicine more than 12 months ago.

Despite these low adoption rates, however, many who have not used telemedicine before are interested in using it to address future health concerns. Seventy-five percent of patients are at least “moderately interested” in using videoconferencing software for a virtual visit in lieu of an in-person office visit for a minor health condition.

Almost one-quarter of patients (24 percent) are “not at all” or “minimally interested” in using telemedicine. This reluctance could be attributed to the relative novelty of online medical visits—and perhaps some degree of suspicion about a medical appointment that doesn’t involve being physically present.

Eric Wicklund, editor at mHealthNews, suggests that patients will express greater interest in telemedicine once they become aware of how it can address some of the challenges associated with scheduling and attending a typical doctor’s appointment. Instead of needing to take time off from work or school, patients can log in from their computers at home or at the office, and can forgo transportation issues and long wait times.

Among patients from both groups (those who have and have not used telemedicine), just 16 percent say they would prefer to go to the ER for a minor ailment if they also had access to a health care provider via videoconferencing.

Patient Preferences for Telemedicine Over ER 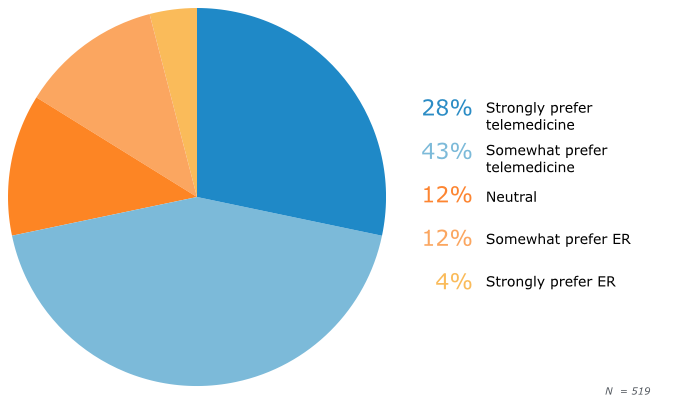 Sources indicate that 8 to 27 percent of ER visits are non-emergencies that could have been treated by a primary care physician or clinic. Since 71 percent of patients would “strongly” or “somewhat prefer” to seek care online for their minor medical issues, it stands to reason that greater adoption of telemedicine could reduce the burden on ER staff and resources.

Virtual medical visits are not only more convenient than driving to the nearest ER, they are also less costly. The average ER visit, according to a study by the National Institute of Health in 2013, costs $2,168—vastly more than the average telemedical visit, at $40 to $50.

We asked patients who have used telemedicine to determine the most positive and negative aspects of their most recent virtual appointment (respondents were allowed to give more than one answer).

The most cited positive elements among our sample align with the benefits that telemedicine advocates typically promote: quality of care that is similar to or higher than an in-person visit (21 percent), not having to travel to the visit (21 percent); and the ability to enjoy the comforts of home (20 percent). An additional 6 percent of respondents (not included in the chart) say they didn’t perceive any benefits during their telemedical visit.

Not needing to arrange transportation to and from appointments is a crucial benefit for patients living in rural areas or without ready access to modes of transport. Currently, telemedicine adoption is higher among rural hospitals than urban or suburban ones, and increased offerings from government organizations, such as the U.S. Department of Veteran's Affairs (VA), promise to reach even more patients who have trouble physically getting to the care they need.

Matthew Gardner, a research designer at the Mayo Clinic who previously studied patient perceptions of videoconferencing visits, notes that the comfort of home and family has the potential to make an impact on the way patients receive potentially concerning health information.

“If people got used to [videoconferencing], there could be a [significant] benefit to being with family members while receiving a diagnosis and not being in a clinical environment,” he suggests.

Respondent mentions of quicker access to care (11 percent) and shorter wait times (10 percent) suggest that patients are compelled by the time-saving potential of medical visits that use videoconferencing software. With the average wait time for an appointment with a specialist hovering around 18.5 days, it’s no wonder patients appreciate the convenience of being able to access a physician within a few days, or even a few hours.

Easy-to-use systems are a benefit for another 9 percent of patients, and avoiding a crowded waiting room is noted by 8 percent. Interestingly, though telemedicine care models have been touted as highly cost-effective, only 4 percent mention cost as a primary benefit. We suspect this finding can be attributed to patients paying out-of-pocket for telemedicine visits, possibly due to a lack of awareness about insurance coverage for such services (more on this below).

We also asked patients who have used telemedicine to cite the top concerns they had about their most recent visit. Twenty-one percent of patients find the lack of in-person interaction troublesome, with many pointing out that the visit was “colder” or “less personal” than an ordinary, in-person visit. Similarly, 8 percent say they are uncomfortable making video calls, and 6 percent are unable to read body language over video. 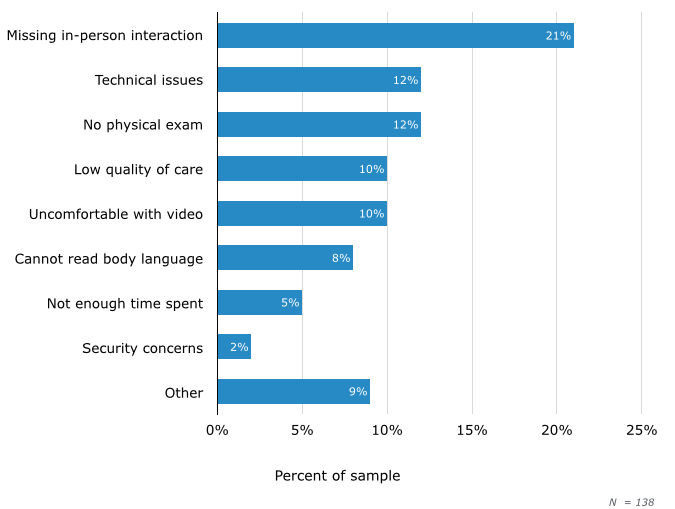 To these concerns, Wicklund says that patient perspectives about using video calls for medical visits are likely to continue evolving over time.

“The definition of a ‘face-to-face interaction’ is going to change,” he explains. “Do [patients] want to take the time and effort to be in the office with a doctor for what, in most cases, is a simple health question that they want answered? Once they see how easily it is done, and how they can still have a conversation with a doctor and how their questions can be solved in this manner, I think that’s going to ease a lot of their concerns about missing a face-to-face consult.”

Of course, Wicklund notes, there will still be occasions where an in-person visit is the best way to address patient concerns. One related issue that 12 percent of respondents raise is the inability of a virtual doctor to perform a physical exam, which some patients view as a fundamental aspect of a medical visit. However, when dealing with simple conditions such as pink eye, many providers will be able to diagnose and prescribe medications without conducting a physical exam.

Technical issues, which can range from poor call quality to power outages, account for 12 percent of negative experiences. While some technical concerns can be addressed by improving software quality, such factors as Internet connection speed and hardware are trickier factors for providers to control. Linking patients to a list of minimum system requirements and a troubleshooting/FAQ page from the main call-in screen could assist those who are new users or are having difficulties with the system.

Just 2 percent of users cite security as their main concern with telemedicine. Although all telemedicine software is required to be HIPAA-compliant, recent research by NueMD reveals that only 31 percent of practice owners surveyed are “very confident” that their electronic devices (including mobile and non-mobile technology) are HIPAA-compliant. This raises issues surrounding how patients consider system security when their personal health information is involved.

Encouragingly, 18 percent of our sample (not included) say there were no negative aspects to their visit.

We’ve previously analyzed the impact of different types of care models on predicted levels of overall patient satisfaction and involvement in treatment decisions. As a point of comparison, we polled patients in our sample who have used telemedicine to determine how this technology impacts those same metrics.

Most Patients Unsure If Their Insurance Covers Telemedicine 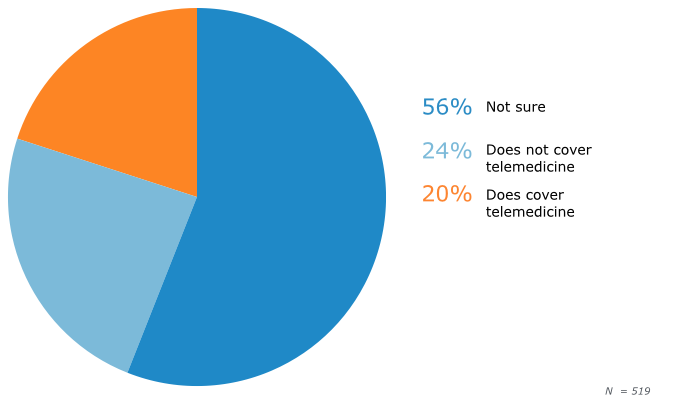 As of January 2015, 22 U.S. states currently require insurers to reimburse for telemedicine visits and in-office visits equally (called “parity laws”), and several more states have such legislation in the works. Some state laws only cover certain services or offer coverage to patients in certain locations, but the increasing availability of funding for virtual visits promises to expand this technology into new territories.

It seems both the respondents surveyed and the experts agree that the expansion of available telemedicine services and coverage is beneficial for both patients and health care providers. So what does the future hold for this technology?

According to Wicklund, insurance companies will begin to guide patients towards telemedicine as insurance coverage expands. The Mayo Clinic’s Gardner adds that provider-to-provider services, such as telestroke consults, are likely to increase within the next few years.

Our data indicates that patients, too, are interested in using telemedicine to improve their overall experience. Thus, providers should consider how this technology can fulfill patient’s desires to access medical care from the comfort of home—while saving their practices valuable time and resources.

Fifty-eight percent of our survey respondents are male, and almost half (48 percent) are between 25 and 34 years old. The highest percentage of respondents have an annual income of less than $25,000 (23 percent).

To find the data in this report, we conducted a two-day online survey of 17 questions and gathered a total of 519 responses (381 non-telemedicine users and 138 telemedicine users). Software Advice performed and funded this research independently.

There are many types of telemedicine and remote health care monitoring services. For the purposes of this survey, we defined telemedicine as “a visit with a medical professional conducted via remote videoconferencing.”

Results are representative of our survey sample, not necessarily the population as a whole. Sources attributed and products referenced in this article may or may not represent client vendors of Software Advice, but vendor status is never used as a basis for selection. Expert commentary solely represents the views of the individual. Chart values are rounded to the nearest whole number.