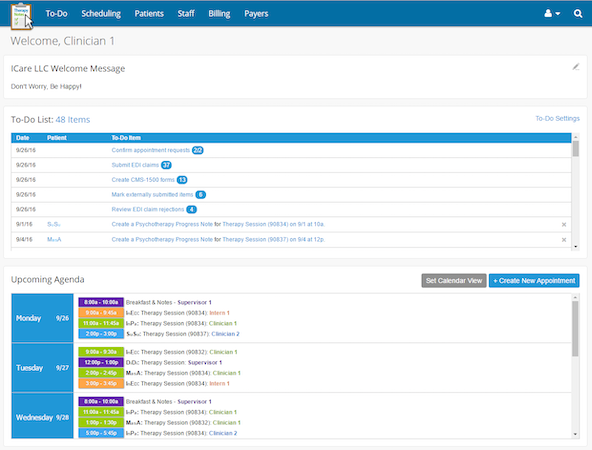 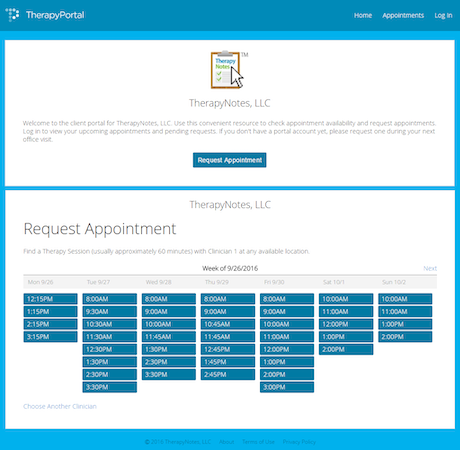 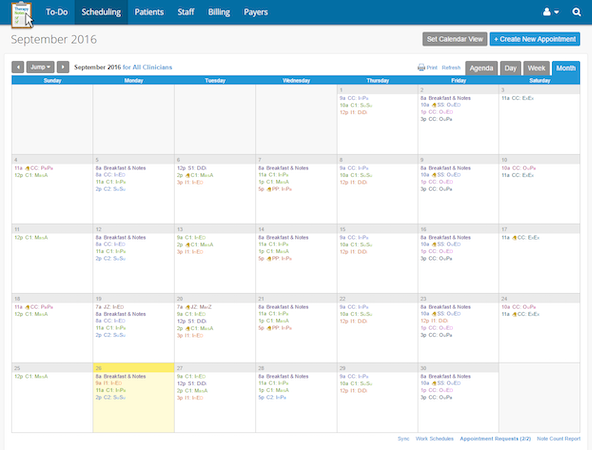 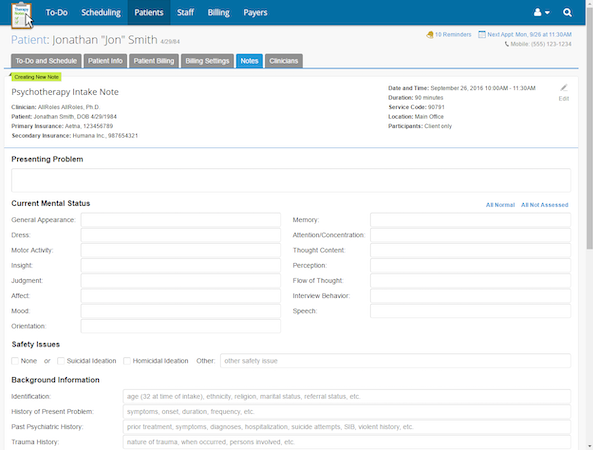 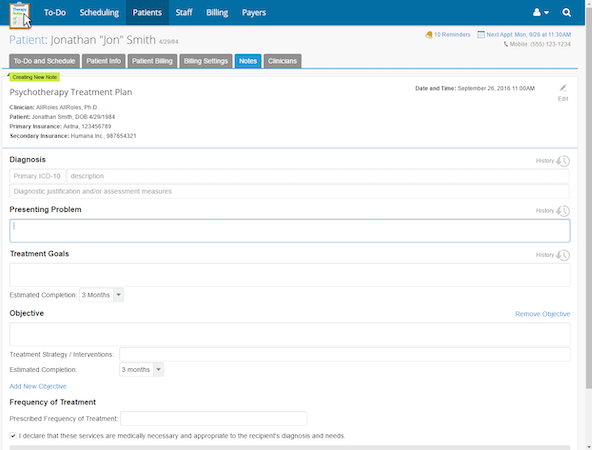 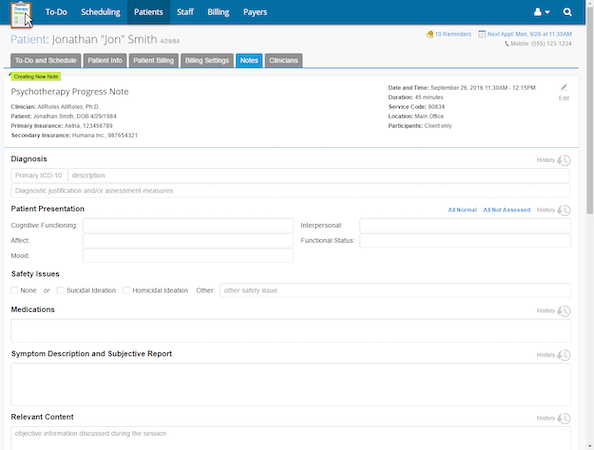 Therapy Notes consistently provides me with excellent customer service, quick solutions, and supportive information. I have easily gained more in value than the monthly expense, and it is with a great ease of mind that I use them to support myself and my clients. Thanks for all your hard work!

The easy to use interface allowed for a quick transition to private practice, which made one less stressor on my plate. Greatly appreciated! I also valued the service providers, especially Heather, for helping me to navigate billing in a prompt and manageable way! 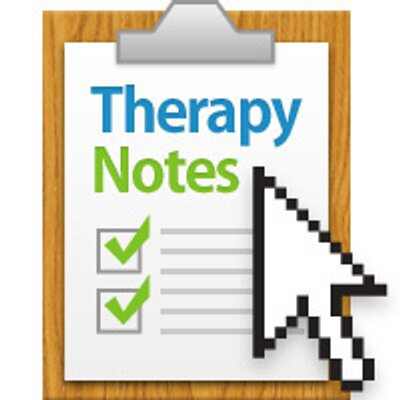 Thanks for the glowing review! There actually is client self scheduling. Call us and we will wall you through setting it up. Thank you!

This is the best software I have found for my private practice. It is priceless to me to be able to reach customer service by phone rather than by chat or an "online ticket". The billing aspect of the software is easier to use than the software I used previously. The only thing I would like to see improved is the addition of different notes and treatment plan templates, or at least ones that are more customizable.

Easier to get up and running than comparable EHRs, great customer service that is easy to reach by phone, easy to navigate

No variety of notes and treatment plan templates

Primarily because customer service was more accessible and responsive. Also, cost was slightly less for what I use it for, and setting up the electronic billing feature was easier.

Reasons for switching to TherapyNotes

Cost was less with Therapy Notes overall, and billing was easier.

I wish I had started with a different program. I am not satisfied. I am not all that computer literate and just want something that gets the job done, and I'm too entrenched (and lazy?) to go to something else like SimplePractice. One more complaint: I have been a psychologist for over 25 years. I don't need the condescending ways that TherapyNotes literally PREVENTS YOU from, rather than cautions you about, doing certain notes out of order. Cautioning is a superb idea. We all get sloppy. Preventing is something altogether different. If I got a lecture (which I did) from someone who received their clinical psych PhD from my alma mater,UCLA, I might not be offended by the condescending tone I received when the woman informed me about the "golden thread" for conceptualizing clients. There was no "we chose to...." They are RIGHT. And another: you can enter a considerable amount of information, especially in billing, and then be told it can't be stored because it isn't properly allocated, or whatever. Can't they store it and flag it so you can return? I've wasted a lot of time here. There's no way to know in advance that you'll lose the information until you go to save it.

I like the electronic billing feature and the fact that it receives and allows recording of Electronic Remittance Advice from payers; the scheduling feature; ease of entering initial billing information from electronic ERAs (though there are other huge problems with billing); some aspects of the notes section; customer support by phone (but not via email); hours available for phone support, including weekend; other areas I'm not thinking of at the moment. Even though I can't recommend it, I do think it has many strengths.

(1) The billing area has countless flaws that my husband, a software developer on Mac and Windows for nearly 40 years, has called to their attention to no avail. When I note these weaknesses, they sound like it's the first time they've heard about it and "pass it on to their team." If you work with Medicare clients or clients who rely on two insurers, watch out. Most Medicare patients have secondary insurance that does not show up in the billing area so that you basically have to use a cumbersome process to enter secondary payment, and it's not immediately clear who paid what, as payments by each don't show up side-by-side in Billing, each associated with the proper payer. If you aren't a provider for the secondary, you have to use a "trick" to enter it. It is not intuitive overall. (2) While phone support is good, email is poor. I write in thorough explanation of the problem so that it can be solved in one go. Most times I write to them, I get a condescending first response that blows me off and requires another complex email essentially conveying the same information. (3) There is no manual. They've been in business too long for this. (4) The articles don't cover enough. For example, I entered "set place of service." Sounds easy, but no hits. (5) They put a lot of resources into tele-therapy when the pandemic hit, which appeared to divert programmers. They make lots of money; why not hire more?

I read about it and it struck me as the best product among the few on the market at the time. I bought it when it just came to market, as I recall, and there were few other programs available.

Thanks for your feedback. We'll be reaching out directly, particularly so we can clarify what billing issues you're seeing. 1. We're unaware of what flaws you're referring to but, hope to learn more. We do have some improvements coming out soon to improve secondary insurance, so hopefully this will address your concern. 2. We will look into why you received poor email support. The people that answer email are the same people that provide stellar phone support. 3. We have no plans to have a printed manual. The Help Center (support.therapynotes.com) is our digital manual. 4. If you can't find your answers in the help center, please call for support and we'll help out. We are readily available. I agree there's an opportunity to add more content. 5. We didn't divert anyone to work on telehealth. There are 6 development teams, one of which was already working on Telehealth. We are always hiring more developers.

My experience is phenomenal, please keep up the great work!!!

I am so happy to report that this year I do not have to update my paperwork and load it into Therapy Notes. Yayyyy!!! TN has recently updated the library to include everything that I need as a clinician. This makes me very happy. Every time that I call they are always friendly and helpful. They know exactly how to help me and they never make me feel bad about not knowing how to navigate some areas within TN. They always follow up with an email to explain the process that they just showed me. I am very pleased with TN. I have used other EHR's and I love this one the best. It's not too simple and not too difficult to navigate. Keep up the great work.

Initially, it was the paperwork issue where I had to make my paperwork web-friendly so that my clients could complete it online, but now that this is no longer a problem I have no cons with TNs.

I used it while working at another agency, and I didn't want to try to relearn it. It was a bit too much to learn on top of everything else that I had to learn at that time.

Reasons for switching to TherapyNotes

I did not like the look. It was a little too simple for me.