Despite the range of fundraising and donor management products available today, many nonprofits either track constituent data manually or make do with an outdated system.

Software Advice surveyed fundraising and donor management software users in the U.S. and abroad, asking questions about which systems they use, the key benefits and challenges and where they plan to invest in the future. This report will provide fundraising professionals who are seeking approval to make a software purchase with data that can help support their case.

Getting buy-in from stakeholders for a large technology purchase is a tough sell in any organization. It’s even more challenging in small, cash-conscious nonprofits where executives must track how every dollar is spent to ensure nothing goes to waste—any investments made in software need strong support from the top.

“The CEO must be convinced that the investment will improve the fundraising program in the short and long term, and that it is a priority among various institutional needs,” explains Clyde P. Watkins, senior partner for fundraising consulting firm Ter Molen Watkins & Brandt.

In addition to knowing the estimated total cost of ownership, nonprofit executives may be moved to action if nonprofit staff can show that new software will actually bring about the positive changes touted by vendors. To learn more about the potential benefits of this technology, we surveyed current fundraising and donor management software users about their satisfaction with their system, how well it delivers on key benefits and the most common challenges they face when using it.

When asked what functionality of their fundraising and donor management software they rely on most, 30 percent of respondents say interaction tracking. This function records, either automatically or manually, inbound and outbound interactions with donors. 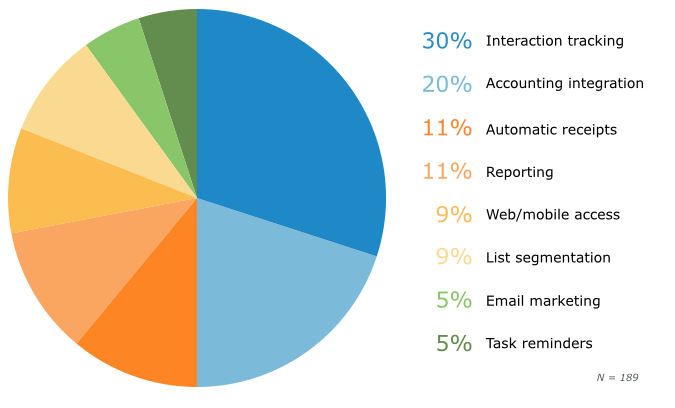 By centralizing interaction data in a single location—rather than storing it in multiple systems, as is common among nonprofits that do not use specialized software—it is easier for staff to generate accurate demographic and activity reports to gain a 360-degree view of donor engagement.

Cretia Bunney, executive director of the United Way of Moscow/Latah County, says she depends on fundraising software to track donations and giving history in order to uncover trends, which is helpful in developing appeals. This strategy has reduced campaign costs while increasing response rates and donations.

“By using [software] to track and monitor our donations and [donors’] giving history and patterns, we have managed to keep donations steady [despite] the economy, by identifying people most likely to donate and targeting appeals to those donors,” says Bunney.

“A donor management system can result in tremendous time-savings, and [can] become an integral part of maintaining and growing relationships with your donors,” says Karen Forst, grant writing and development consultant for Laura Bishop Communications, a communications and public relations firm.

“Once established, the system significantly reduces the staff hours needed to input donations and track success of individual appeal campaigns or fundraising events, freeing up time to pursue other development opportunities.”

Going back to our survey results, 20 percent of respondents say they rely heavily on the fundraising system’s integration with an accounting program. Buyers in our sample report that when contribution and pledge data is synced between systems, double entry is eliminated, data errors are reduced and it is possible to generate more accurate financial reports.

Automating the sending of donation receipts and acknowledgements can also save staff many hours of time, and is the most useful software capability, according to 11 percent of respondents.

Hospice Austin, for example, “reduced the time it took to enter and receipt gifts from two weeks to two days” with its software, according to Blackbaud.

Software Has the Greatest Positive Impact on Donation Collection

Overall, the majority of respondents say that their software has either a “positive” or “very positive” impact on their fundraising activities. The number and amount of donations collected is most positively impacted (99 percent), followed very closely by recordkeeping, financial reporting and workflow efficiency, at 98 percent each. 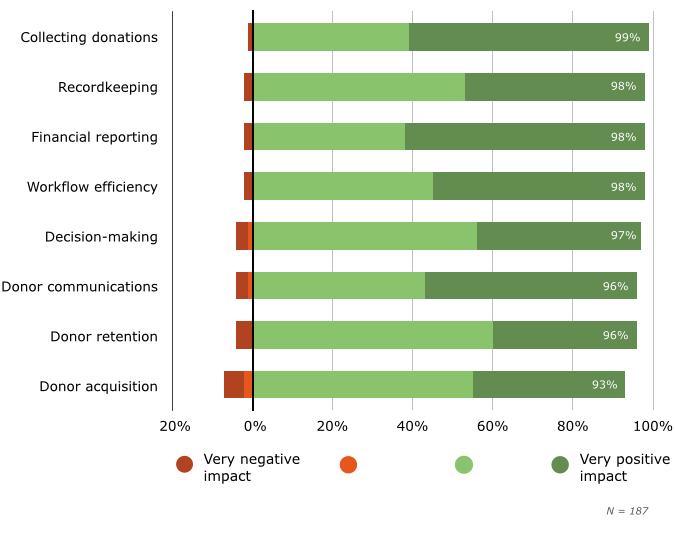 According to Watkins, fundraising and donor management software is “the most effective way that the CEO and board can see trends among all its donors, and quickly analyze many years of data to demonstrate where the organization is performing well, where the challenges are and how [its] donor base changes.”

School on Wheels, for example, a nonprofit that dispenses tutoring services to homeless children, previously organized its constituent data within multiple spreadsheets, which made it difficult to share and analyze data.

The nonprofit implemented a software system to solve these problems, and had astounding fundraising success. Staff raised $30,000 in one month via an online campaign and another $40,000 through an auction and gala—all because the software helped them pinpoint their most engaged supporters and adjust their campaign strategies to target those donors, thereby increasing contributions.

Based on this data, it is reasonable to conclude that most nonprofits that adopt a quality software program can expect to see moderate to considerable improvement in the overall efficiency of operations, as well as in program outcomes.

Learning Curve, Lack of Customization Are Most Common Challenges

Because software is not, of course, a magic bullet for solving problems, we also asked respondents about their top challenges—which other nonprofits can use to create a plan for avoiding the same challenges.

The biggest obstacles, according to 67 percent of respondents each, are an unexpectedly high learning curve and a lack of customization options (meaning the software could not be adapted to align with existing business processes). 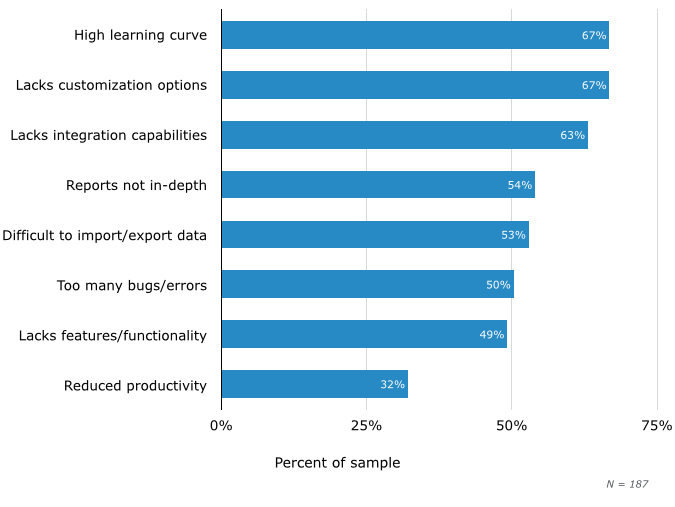 Before committing to a purchase, nonprofits should allow employees who plan to use the software on a daily basis to test drive it by signing up for a free trial or demo. This will allow decision makers to gauge how quickly staff will be able to ramp up so they can decide whether training should be part of the budget.

Kristin Urban, manager of data services for the Chesapeake Bay Foundation (CBF), says that CBF is in the process of replacing the donor management software it has used since the 1990s because the vendor’s updates have not kept pace with the nonprofit’s need for automation and in-depth reporting.

Urban strongly recommends networking with other fundraising professionals on social media, such as LinkedIn, to see what software they are using. Then, she says, a formal request for information (RFI) can be created to evaluate products and ensure an organization is selecting the right software for its needs.

“The RFI gave us formality without the commitment,” she says. “We pre-selected vendors based on the RFI criteria, which gave us a lot of confidence in our final decision.”

Determining whether a product will support every customization a nonprofit needs is not as straightforward, but there are several ways to find this information out. Nonprofits can ask the vendor if the software will accommodate specific requirements, participate in a demo or free trial to test the product out and/or read reviews to see if users have had issues with something the organization is concerned about.

Other top challenges among respondents in our survey include finding out that the software did not integrate with other existing software (62 percent), reporting capabilities that were not sufficiently in-depth (54 percent) and difficulty importing or exporting data (53 percent).

In some cases, respondents report that the software actually decreased their productivity compared to the methods they used previously (32 percent). While it is common for productivity to decrease when new software is implemented, this problem should be temporary, resolving itself as staff learns how to use the program.

Looking ahead to the rest of the year, 56 percent of respondents expect their organization to increase spending on fundraising and donor management software in 2015, either by upgrading their current system or purchasing new software. Forty-three percent say spending will remain the same, and only 1 percent expect a decrease in investment.

These figures have two possible implications: One, the majority of nonprofits find fundraising software to be a wise investment, with benefits outweighing the potential drawbacks, so they want to continue investing in it. Or two, they are unhappy with their current setup, and need to invest in new software to make it better.

The reasons for increased investment could be a combination of both of these motivations. In a recent Software Advice report, we found that many buyers evaluating new software are doing so to overcome shortfalls with their existing system. These include a system that is outdated (14 percent), a lack of desired functionality (12 percent) and an interface that is not user-friendly (10 percent).

While we do not expect small nonprofits to embark on lavish information technology (IT) spending sprees, this is a good sign that they understand the benefits of moving away from using spreadsheets or an outdated system.

While software challenges can and do arise when new fundraising and donor management software is adopted, the benefits, in most cases, greatly outweigh the drawbacks.

Nonprofits that perform due diligence and give serious consideration to their needs and to the capabilities of prospective software products will likely see improvements in many areas: workflow efficiency, data quality, donor insights, targeted communications—and, ultimately, the overall impact of fundraising efforts.

Forst perfectly summarizes how an investment in software can pay off:

“Donor databases help the executive director and development staff find the critical connections that can help turn a one-time supporter into a champion of your cause. In doing so, the cost of the software can return a benefit to the organization that is far greater than the initial cost.”

The bottom line? The right software is worth the cost, and users consider it a key tool for accelerating fundraising activities.

We contacted current fundraising and donor management software users to collect responses for this survey. All results were obtained in a fair and anonymous manner.

Results are representative of our survey sample, not necessarily the population as a whole. User commentary solely represents the views of individuals. Chart values are rounded to the nearest whole number.