Pricing starts at $125 per admin license and includes unlimited users, projects, emails, reports, and more. Learn more with a free demo and by contacting Regpack directly for more pricing information. 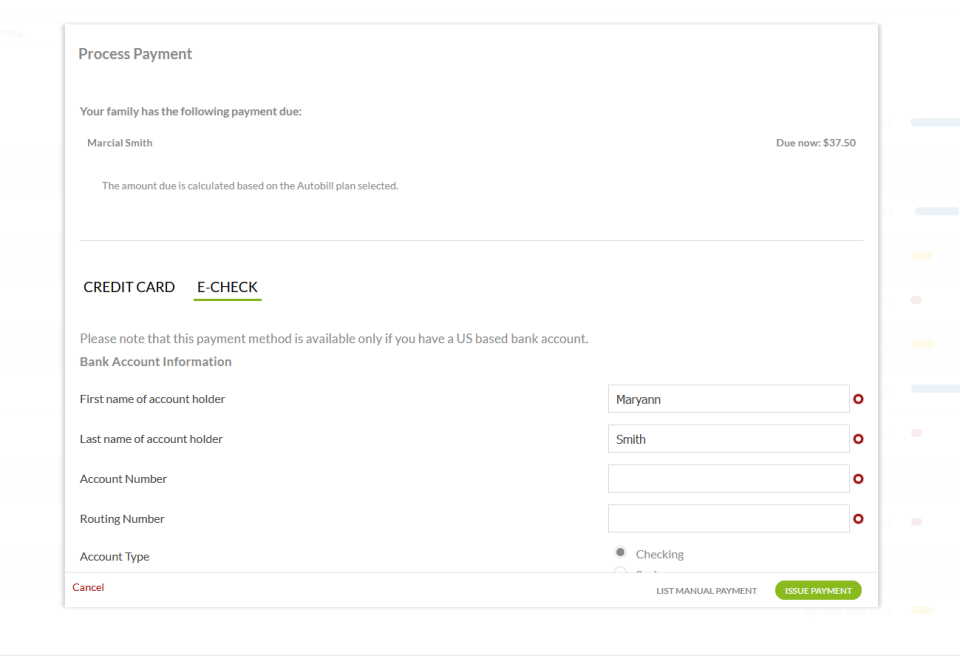 Been using RegPack for the past 3 years. It's an excellent product and service has been A1.

Registration for our event is easier and more reliable.

The support team is excellent in helping us set up our projects. They delivered a product that we can use bilingually too. The user rates are very reasonable.

I would love the elimination of credit card fees but I probably want to live in a perfect world too. Very satisfied.

Brian, we'd love to live in a perfect world as well! Glad to hear that the Support you've received from Regpack has been top notch and you are using our powerful registration system at a reasonable rate! We are glad to have you in the Regpack family for 3 year and counting!

Best program out of the 3 I've worked with

I love it! The staff is fantastic, the system is user friendly and the families have had minimal issues with the new system.

The software is very intuitive and easy for a computer dummy, like my self, to figure out

This is very minor but there are a few features that I wish the system had, such as an option to choose how payments are shown. More nit picky issues than fundamental issues.

The responsiveness of the inquiry and the attentive responsive to my initial questions.

The first person that created our registration did a fantastic job but no one else could manage it but him. It became a dangerous situation for a small business to depend on one person. The second system I tried was the least intuitive thing I think I have ever used on a computer. Everything took a very long time to do and families kept getting kicked off the system and then were unable to log back in. A true nightmare.

Sarah - so glad we were able to provide a tool that you and your team, and your families, can use easily!

Regpack is very intuitive and easy to figure out. I especially utilize the forms, triggers, and token features.

There are some odd glitches with the software. For example, sometimes when I change the status of a user, certain forms disappear. They are easy enough to add back, but I am not sure why this happens.

Susan, thanks for your feedback! Please send over a video to our support team, if you can, of the user status and form issue you have seen. We'd love to see what's going on in your system! Glad to hear that you find the system to be intuitive and that our customizing tools like triggers and personalization tokens make things easier for you!

The worst customer service. We're live and they're ignoring emails. So either there's a bug they don't know how to fix and won't let us know, or once you've paid, they don't care. I've spent this past week attempting to get help and I'd rather be stuck on the 405 at 5PM with the sun in my eyes and four lanes of traffic to cross to make my exit than deal with them. They are costing us time and money as we wait for them to get around to helping us. Dramatic? Yes. I get that. Have I sent more emails than anyone ever should to try and get mediocre help? Also yes. Their line is that they respond 'in the order the emails are received' but apparently they can't hire enough people to answer them in order in a timely fashion. I would not recommend this to anyone, unless you absolutely cannot afford anything else. And then go in prepared, add a few minutes to your morning meditation, practice deep breathing as you wait and wait and wait for help.

We purchased this software because it was much cheaper than other versions of membership management software out there, so perhaps I should've been prepared. The function of the Dashboard / Administrative side is a bit obtuse and glitchy at times, but overall usable.

It's the customer service that really kills you. Since there are still obvious bugs in the system, you'd think they'd have a customer service team who are interested in helping you iron those out. I've been working with [SENSITIVE CONTENT] to get everything set up, so initially responses were timely. However, once you go live they hand you over to their general support team, which does not respond sooner than 12 hrs unless you loop in [SENSITIVE CONTENT] and then you'll get one email back from them during the business day on time sensitive issues but no follow up. I looped in [SENSITIVE CONTENT] in an effort to get the bugs addressed quickly and she proceeded to ignore my emails until I looped in [SENSITIVE CONTENT]. At which point I received timely emails for one morning (ie: I sent an email, they responded, I sent another email, and they responded, and then back to the long wait time). I think the really disappointing aspect is that [SENSITIVE CONTENT] couldn't even be bothered to respond to my emails requesting help and following up, despite the fact that we're live and have a serious issue to fix. The support that finally responded to this issue told us to change a setting, but that setting is already correct. When I responded with this information, it's been radio silence ever since.

It was the best price, and I foolishly thought that the reviews about bad customer service were hyperbolic.

Hi there! I'm sorry to hear that you've had some frustration with our Support team. Upon reviewing your feedback and locating the team members and account you're referencing, our management team personally reviewed the email threads and found that response times were generally within 2-6 hours from receipt. Additionally our Support team, Project Management team, and Sales team was in constant communication with you to provide explanation and context for your questions and to ensure you went live on schedule and with the resources you needed to be successful. If you have further feedback that our team can address personally, please let us know and we're glad to help.

It is great, I enjoy using it.

I like the features that they have continued to add over the years. It has come a long way since we started using this in 2017. The customer support is always timely with issues and responses. They also are really good at checking in to make sure that you like using it and if we have any issues.

I wish that some things transferred over. For example, we use this to put on educational events, so sometimes a user may come to multiple events and not all of their information transfers. Not that big of a deal, it just would be helpful.

Cost. Regpack offers what we need for a great cost.

Cost and iMIS was very outdated.

Madey - so happy to hear you love using Regpack and our team gives you the support you need!