Many nonprofits publish annual reports to communicate key accomplishments and data points to donors, volunteers and board members from one year to the next. But the time and energy typically involved in the creation of these reports often far outweighs their benefit.

As Kivi Leroux Miller, president of Nonprofit Marketing Guide, explains, “Nonprofits are investing way too much time, energy and money into long, printed reports that no one in their right mind will read.”

To solve this problem, some organizations are abandoning the traditional written annual report format in favor of infographics, which convey relevant information in a more unique and impactful way. When done right, infographics can help your organization communicate better with what Aeri Wittenbourgh, communications officer at Concern Worldwide, refers to as “an increasingly visual literate donor population.”

We spoke with nonprofit and marketing experts to learn how your organization can create informative, effective nonprofit infographic annual reports that help retain existing donors and encourage new ones to contribute. Here are four key steps to follow.

Need a visual walkthrough? This video provides more insight on the steps to create a compelling annual guide.

Focus on 2 or 3 Important Data Points

Traditional annual reports are lengthy written documents that can drown a reader in information. As such, nonprofits that switch to an infographic format are often tempted to cram every piece of data from the traditional report into their infographic.

“There’s a tendency to try to represent every department within the organization, but you should really share only two or three good pieces of data to tell a story,” says Zach Hochstadt, founding partner of the nonprofit marketing firm Mission Minded.

“Only essential data should make it into the infographic,” continues Mazarine Treyz, founder of Wild Woman Fundraising. “People just want to see the overall impact and where the money went.”

In order to distill your nonprofit’s data into just a few key figures to include, consider the following three questions:

Understanding your audience is key, our experts say, because different donor constituencies often value different information. For example, information about the financial health of your organization (e.g. your GuideStar rating) might be more important to highlight than data about the impact you’re having on a certain population.

The New York Public Library’s (NYPL) 2012 annual report infographic is a stellar example of using select information to build a compelling narrative that communicates the right message to its audience. Two crucial pieces of data (18 million total library visits in 2012 and an increase in total visits of 12 percent from 2008) are featured prominently to tell the story of an organization serving more people than ever in recent history.

NYPL emphasizes these two key pieces of data by making them larger than the rest of the text and placing them near the top of the infographic. The additional data included below, including the increase in visitors over time and the distribution of visitors among different locations, provides added context to support the main data points.

Even though infographics are often used to illustrate data points, neglecting to add more personal details of the people, communities or populations your nonprofit reaches can lessen their impact. To this end, our experts recommend communicating a story that highlights the success of your organization while appealing to the cares and concerns of donors.

“People give with their hearts, not their minds,” Treyz explains. “Stories are much more emotionally compelling than numbers.” Using photographs to tell the narrative of a particular person your nonprofit helped, for example, can be a highly effective tactic.

Take Student Advocacy’s 2012-2013 annual report, which blends data on the nonprofit’s impact and efficiency with a photo of Michael, a young boy the organization was able to help through its program.

To the right of Michael’s photo, the infographic provides specific details about his personal challenges (disciplinary issues in school), how the organization was able to help (getting Michael enrolled in special needs classes) and the resulting success (no disciplinary issues since).

While this text is clearly visible and easy to read, Student Advocacy keeps the focus on the more personal, human aspect of its mission by ensuring that Michael’s photo is the largest visual element in the report and clearly displaying his name next to his picture. 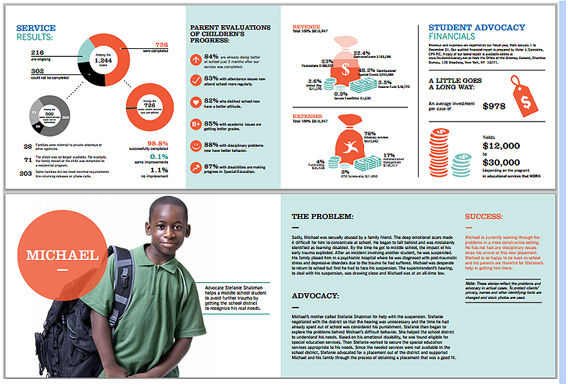 “More than anything else, donors respond to the photographs of children that we help,” explains Lisa Syron, Student Advocacy’s executive director. “Even though we use the infographic format, we still include those stories of the children—that won’t change in the future.”

Align With Your Existing Design Elements

If your nonprofit has a website or any other recent publications, you’ve already started to develop a visual brand. The strong visual impact of an infographic annual report presents a valuable opportunity to reinforce this brand by using similar design elements to present a cohesive look and feel.

“There’s a reason ad agencies talk in terms of impressions: it takes a certain number of impressions before the message sinks into a person’s mind,” Hochstadt says. “If each of the impressions I get from a nonprofit is different, their brand is never going to sink in.”

“If an organization is inconsistent in its visuals, it undermines the organization’s credibility—your infographic should look like your website and any brochures or posters that you’ve published,” he explains. “Inconsistent visuals give readers the impression that a nonprofit is a fly-by-night operation run by people making arbitrary decisions.”

Ruby Johnson is co-coordinator of FRIDA The Young Feminist Fund, which encourages the participation and leadership of young feminist activists. To create the organization’s 2013 infographic annual report, Johnson worked with the information consultant nonprofit the Tactical Technology Collective (TTC).

To do this, TTC borrowed design elements such as FRIDA’s pink and orange hues and typefaces that mimic handwritten letters to evoke a more handcrafted feel. 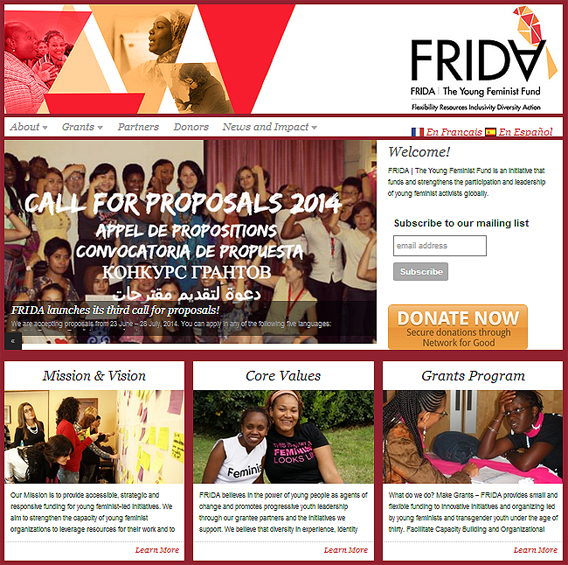 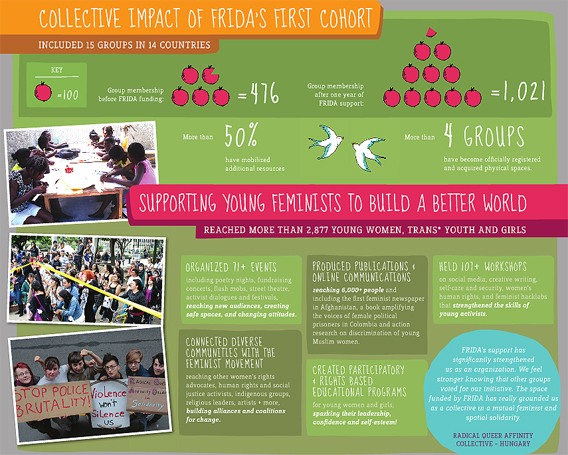 FRIDA’s mascot, a songbird, appears at the top of the nonprofit’s homepage, so TTC made sure to include songbirds prominently in the infographic as well. Finally, photos of young women activists from around the world appear prominently on the organization’s homepage, as well as the infographic, helping reinforce FRIDA’s commitment to supporting women’s rights advocacy groups worldwide.

Hire a Designer With Relevant Prior Experience

Having a clear plan for how you want your infographic annual report to look is only half the challenge. Unless you have the in-house expertise to do the design work yourself, chances are you’ll have to hire a graphic designer to complete it for you.

To make sure your infographic turns out successfully, you first have to be confident that you’ve chosen the right professional for the job, and that they have a clear understanding of the visual elements and message you want to include. For many nonprofits, however, it’s difficult to know how to choose someone with the right skills.

For this reason, Carl Atiya Swanson, director of movement building for Springboard for the Arts, advises choosing a graphic designer who “has produced an infographic that you like and want your own report to look like.” Knowing that they’ve completed a similar project in the past, he says, will help ensure that they’re able to complete your project to your satisfaction.

Once you’ve chosen a designer to work with, discuss the project extensively with them to make sure they clearly understand what the final product should look like. This conversation should ideally occur in person, with all key stakeholders in attendance, to ensure clear communication from the very start.

Johnson says that FRIDA’s infographic production process involved staff members in Mexico and Cambodia and design professionals in the United Kingdom and Germany. As such, communication between collaborators occurred primarily through Skype and email.

“The globally inclusive process fit FRIDA’s identity and made the infographic unique,” Johnson says. “However, if we’d been able to meet in person with the design team, it may have saved us a significant amount of time on revisions and back-and-forth.”

Whether or not you’re able to meet with your designer face-to-face, Swanson stresses the importance of supplying them with everything they need to get started. “You want to be as articulate as possible about what you want,” he explains.

For the best outcome, provide your designer with the following:

Swanson says Springboard for the Arts chose their designer, Fontlove Studio’s Elana Wolowitz Schwartzman, because the organization wanted its infographic annual report to resemble an infographic Schwartzman had produced for the Common Roots Cafe.

This choice enabled the nonprofit to publish an infographic annual report that shared many visual elements with the cafe’s infographic. These elements include: 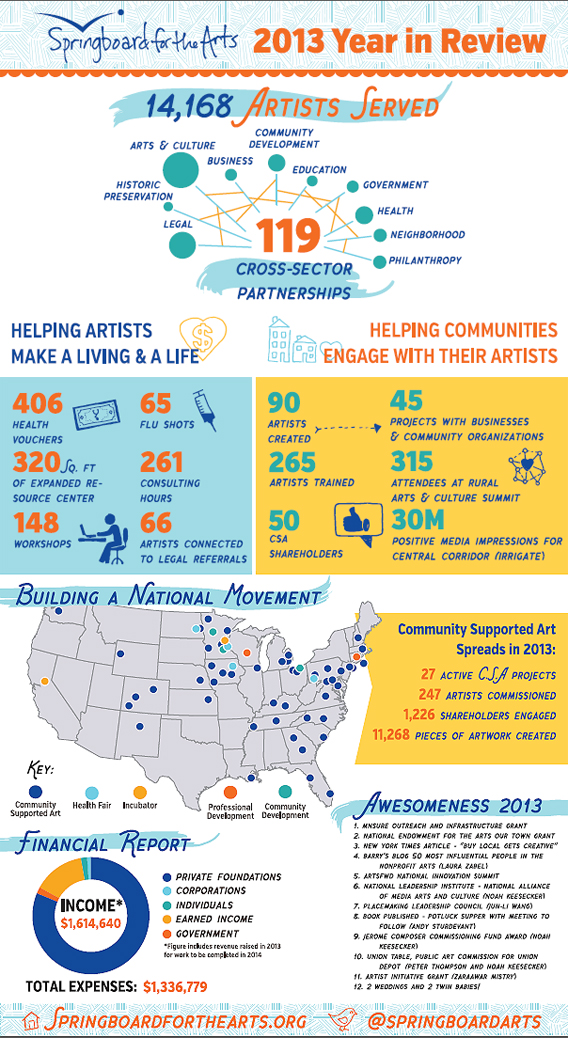 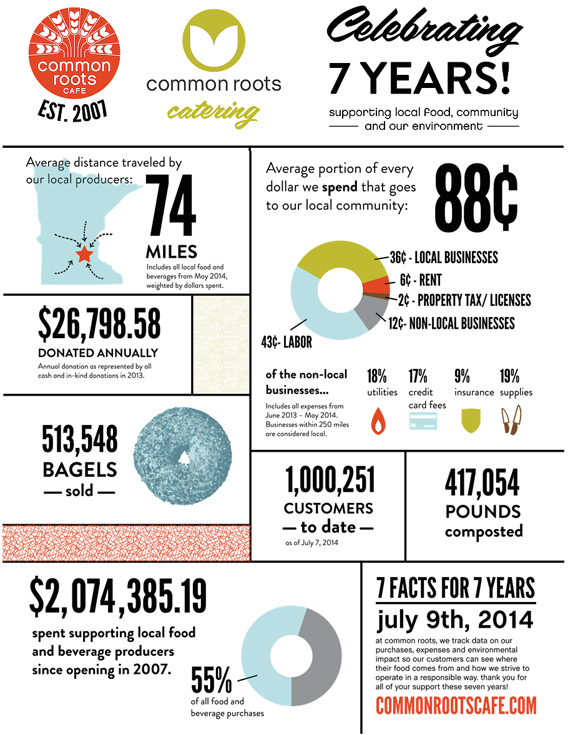 DIY Design: Tips If You Can’t Afford a Designer

The initial cost of hiring a designer can tempt nonprofits to rely on internal talent for design work, but tasking an amateur designer with a professional job is likely to cost more in the long run—both in terms of time and money. If your budget doesn’t allow for hiring outside help, however, make sure your in-house talent follows these three design best practices for optimal results:

Only use two to three colors. “Nonprofits are always tempted to use a trillion colors, and it looks amateurish,” Treyz explains. If you don’t have distinctive colors associated with your organization’s brand, freel tools such as ColorZilla can help you choose the ones you want to use.

Choose fonts that match the image you want to convey. The NYPL example above used a bold, sans-serif typeface to convey respectability, while FRIDA used cursive to reinforce the nonprofit’s grassroots image. Regardless of your nonprofit’s brand, make sure you pick a font that matches it.

Ensure data looks professional. “One of the worst mistakes I see nonprofits make in their annual reports is to include Excel spreadsheets that aren’t formatted,” Treyz says. “They might even have multiple, random fonts in them left over from cutting and pasting data.”

Nonprofits that lack a professional designer to transform data into clean visuals can use free tools such as Infogr.am and Canva to turn Excel data into professional looking infographics.

An infographic annual report can enhance your nonprofit’s emotional connection with donors and powerfully reinforce your nonprofit’s brand image while clearly communicating key data points to donors, volunteers and board members.

By choosing the right few pieces of data to build your report around, using photos to convey the personal impact your organization has and working effectively with an experienced designer, you too can create a stellar infographic that maximizes the impact of your annual report.

Your Foolproof Guide to Buying Software

Techniques for Data Cleaning and Integration in Excel