By now, you already know what happened with Amazon’s acquisition of Whole Foods. So, let’s cut to the chase and answer your questions about the potential retailer and consumer ramifications of the deal. We’ll start with the most pressing issue:

How long until drones can bring me charcuterie and craft beer?

Not to shoot down the drone truthers out there, but I’m betting autonomous vehicles will deliver groceries en masse much sooner than flying drones will. Logistically, roaming vans of groceries able to make multiple stops make more sense than drones. Either way, this brings up the underlying question with the acquisition:

What Amazon technology will be leveraged at Whole Foods, and how will it work?

While Amazon has been “limited” in their grocery efforts over the past decade, they’ve been able to launch their AmazonFresh program in select coastal cities. And, they just launched their AmazonFresh Pickup for Prime members, who can order groceries online and pick them up at a specific location.

I assume the acquisition of ~460 primely located Whole Foods locations will help Amazon refine and launch its AmazonFresh delivery to the general populus—sorry Instacart (the grocery delivery service that has a strategic partnership with Whole Foods).

And AmazonFresh Pickup might have the least friction for scaling across all Whole Foods locations, given the advantageous locations of most of those locations combined with the ease of in-store order fulfillment.

Amazon could also leverage these new premium physical locations as interactive fulfillment centers that go beyond grocery stores. Prime members could pick up all types of Amazon orders while having the option to shop for additional items, grocery or otherwise.

There’s also speculation that the AmazonGo store’s “Just Walk Out” technology will be applied to the Whole Foods shopping experience, but that concept has had a tougher time taking off than expected at Amazon’s 1,800-square-foot Seattle test store.

Meanwhile, Whole Foods typically opens store locations that range from 250,000 to 500,000-square-feet and feature exponentially more products. I’m not going to bet against what Amazon and Bezos are capable of, but my guess is that implementing AmazonGo at Whole Foods locations is still a ways off. Which brings us to the next question …

Okay, so with drones and “Just Walk Out” technology likely years away, what’s likely to be the immediate impact of the acquisition?

As I mentioned, AmazonFresh Pickup seems to have the quickest path to scaling across Whole Foods’ locations. But it will likely be preceded by a quintessential Amazon move: price cuts and smaller margins.

In other words, Whole Foods’ “Whole Paycheck” nickname might soon be a thing of the past. In fact, there’s already chatter about just how Amazon will accomplish this.

Speculation includes revamping Whole Foods’ inventory to feature more in-house, premium brands and even developing/adopting a cashier-free checkout process. No matter the method, price cuts are happening. Whole Foods has always struggled with its pricey image in a (grocery) world of low prices.

Amazon, on the other hand, has always operated with incredibly low, often times negative, profit margins. And there’s nothing to indicate they’ll buck this philosophy for their new grocery chain.

What does the acquisition mean for small business grocers?

More of the same, I’m afraid. The grocery game operates on microscopic margins—it’s all about volume and market share. And winning that game requires marketing and operational excellence that most small-to-medium (SMB) grocers just don’t have the resources to excel at.

But the nails were hitting the coffin long before Amazon grabbed the hammer:

So are all small grocers and food markets doomed?

The outlook certainly isn’t great for SMB/mom-and-pop/neighborhood grocers. While they’ve definitely seen and survived a fair amount of adversity over the years, these next few years are set to be the most disruptive and competitive they’ve ever faced.

However, there are two models that have a better chance than the rest to make it through:

Is Amazon really trying to take over the retail world with Whole Foods?

It doesn’t stop with Whole Foods. Reports recently surfaced that Amazon might seek an acquisition of BigBasket, the leading online grocery deliverer in New Delhi, in order to launch delivery services in a lucrative market.

There’s more. In the same week as the Whole Foods’ acquisition was announced:

But it’s not just Amazon … Wal-Mart is positioning itself as an everyday competitor to the Amazon machine. Wal-Mart acquired the online marketplace Jet.com in the second half of 2016. And on the same day as the acquisition that spurred this article, Wal-Mart made its own move into higher quality goods by acquiring premium men’s clothing line Bonobos.

Does this mean that, in 10 years, everything we buy will be through Amazon or Wal-Mart?

No. No. No. SMB retailers will safely accompany us into the next decade and beyond. This is because the national scope of small businesses is, well, decidedly un-small: According to the National Retail Federation (NRF), 91 percent of all retailers employ fewer than 20 employees.

And not all SMB retailers are turning to online stores. According to the 2016 Commercial Real Estate Development Association report, over 86 million square feet of new retail space was constructed in 2016.

For reference, the average square footage of a convenience store like a 7-Eleven is between 1,400 and 2,800 square feet, so we’re talking enough space for at least 30,700 new 7-Eleven-sized (aka small) stores.

There’s evidence to suggest that there is healthy competition for this space coming from small retailers. Again citing the NRF, “Availability rates [for retail space] have been steadily declining since the end of the recession.” In other words, physical space is becoming more affordable for smaller retailers.

It’s easy to get swept up in 24-hour news cycles about the onset of technology and automation undercutting the retail space, not to mention the death of retail at large. And it can be entertaining to speculate about a world run by two giant, competing companies.

But in reality, innovative retail operators will keep inventing and reimagining their business model, grinding it out through these types of changes and disruptions with their businesses in tow—and intact.

This innovation, coupled with technological advances for retail management and point of sale software will help ensure the health and practicality of both niche and general retail stores for years to come. So, take a deep breath … Amazon isn’t running the world just yet. 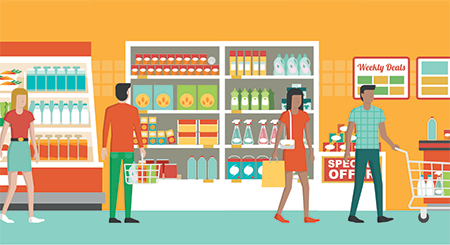 Is Your Retail Customer Experience Driving Customers Away?

What Impact Will the Amazon Go Store Have on SMB Retailers?