We’ve been beating the “customers want self-service!” drum for several years now, and we’ve covered it from many angles.

We’ve researched the methods companies use to measure self-service, uncovered some lesser known ways to improve it and shown how important it is in determining customer experience, especially for mobile customers.

If any of those topics are new to you, you should click the links above and familiarize yourself with them before proceeding here. The topic of this report, virtual customer assistants (VCA), is more advanced and assumes that you’ve already considered the above strategies, and possibly already implemented them.

In this report we discuss:

What Is a Virtual Customer Assistant?
Whatever Happened to Clippy? What Microsoft Got Wrong
The Role (and Benefits) of VCAs in a Service Strategy
Off-the-Shelf Options for VCA Deployment
Next Steps

What Is a Virtual Customer Assistant?

The fact that it’s described as an “assistant” is important, too. VCAs are not expected to fully resolve customer issues. More often, they’re expected to assist customers by giving them a push in the right direction.

VCAs can be used in a variety of technologies, from electronic informational kiosks to business phone systems where they build upon older IVR technologies. But for now, they’re most frequently encountered online. Online deployments have lower costs and lower technical barriers, so are often the first step for SMBs and enterprises alike.

Chances are good you’ve already encountered a VCA online. At the moment, online VCAs typically take one of two forms:

Note that in both cases, the VCA implementations seek to intervene in activities in which customers are already engaging. In other words, the VCA isn’t an additional or independent support channel, rather the VCA is added to support existing channels or existing customer behaviors.

Whatever Happened to Clippy? What Microsoft Got Wrong

One VCA which many of us remember—fondly or not (but mostly not)—was Microsoft’s animated assistant nicknamed Clippy. Clippy first popped up unannounced and uninvited in Word documents, back in the late 1990s.

Clippy was a unique VCA implementation, even by today’s standards, as it combined elements of two different customer service strategies: It was a VCA that tried to offer proactive support. And boy, did Clippy ever try!

Clippy, the VCA the world just wasn’t ready for

Writing for Hackeducation.com, Audrey Watters describes Clippy and the coldness with which his incessant offers to help were received,“[Clippy] remains, arguably, the best known and most hated user interface agent in computer history. […] Indeed, almost every early website offering instructions on how to use Microsoft’s software suite contained instructions on how to disable its functionality.”

“Microsoft,” Watters concludes, “turned off the feature by default in Office XP and removed Clippy altogether from Office 2007.”

He only wanted to help, so why was Clippy so hated? Let us count the ways:

But, for all his flaws, Clippy’s life was not in vain. Today, Clippy serves as a poignant reminder. Think of him as a paperclip-shaped lighthouse, warning today’s VCA and UX designers of the dangers they could face, and reminding businesses what mistakes to avoid when they try to extend a helping hand.

The Role (and Benefits) of VCAs in a Service Strategy

Today, VCAs are most often situated on the frontlines of a company’s customer service strategy. They’re designed to engage customers who’ve just begun looking for an answer to their question.

This avoids Problem #1 on Clippy’s list above; being overly proactive with offers to help.

VCAs are often implemented directly on a company’s self-service webpage. Alternatively, they can be located on a “Contact Us” page, giving the customer one last chance at self-service before they pick up the phone or write an email.

Since these deployments are powered by your website server, they don’t use any of a user’s local computing resources, avoiding Clippy’s Problem #5 above.

However, there’s really no limit to where or how VCAs can be deployed. Companies can, and should, find creative uses for VCAs. By examining your existing customer journey map and identifying common challenges, you can find creative VCA implementations that benefit customers and add value to your company’s initiative.

This approach also helps avoid Problems #2 and #3 on Clippy’s list.

In the example shown below, the VCA implementation on xda-developers.com tries to stop users before they post questions that are already answered. As the user types the title of their post or question, a behind-the-scenes VCA gathers a list of “similar threads.”

As you may have already guessed, the most immediate and tangible benefit of a successful VCA implementation is a reduction in volume of service requests to other service channels. In this regard, VCAs serve a role similar to online self-service resources. It’s no accident that VCAs often go hand in hand with self-service resources.

There’s a wide assortment of vendors that offer VCA technology, with more companies joining the ranks regularly. There are cloud-based VCA solutions and VCAs that come integrated with larger business software platforms, such as CRM.

Creative Virtual was one of the first companies to offer a VCA product, in 2004. Since then, they’ve continually refined and added to their stable of virtual assistants, now offering their V-Person VCA for mobile service, social media, service desks, contact centers and other contexts. 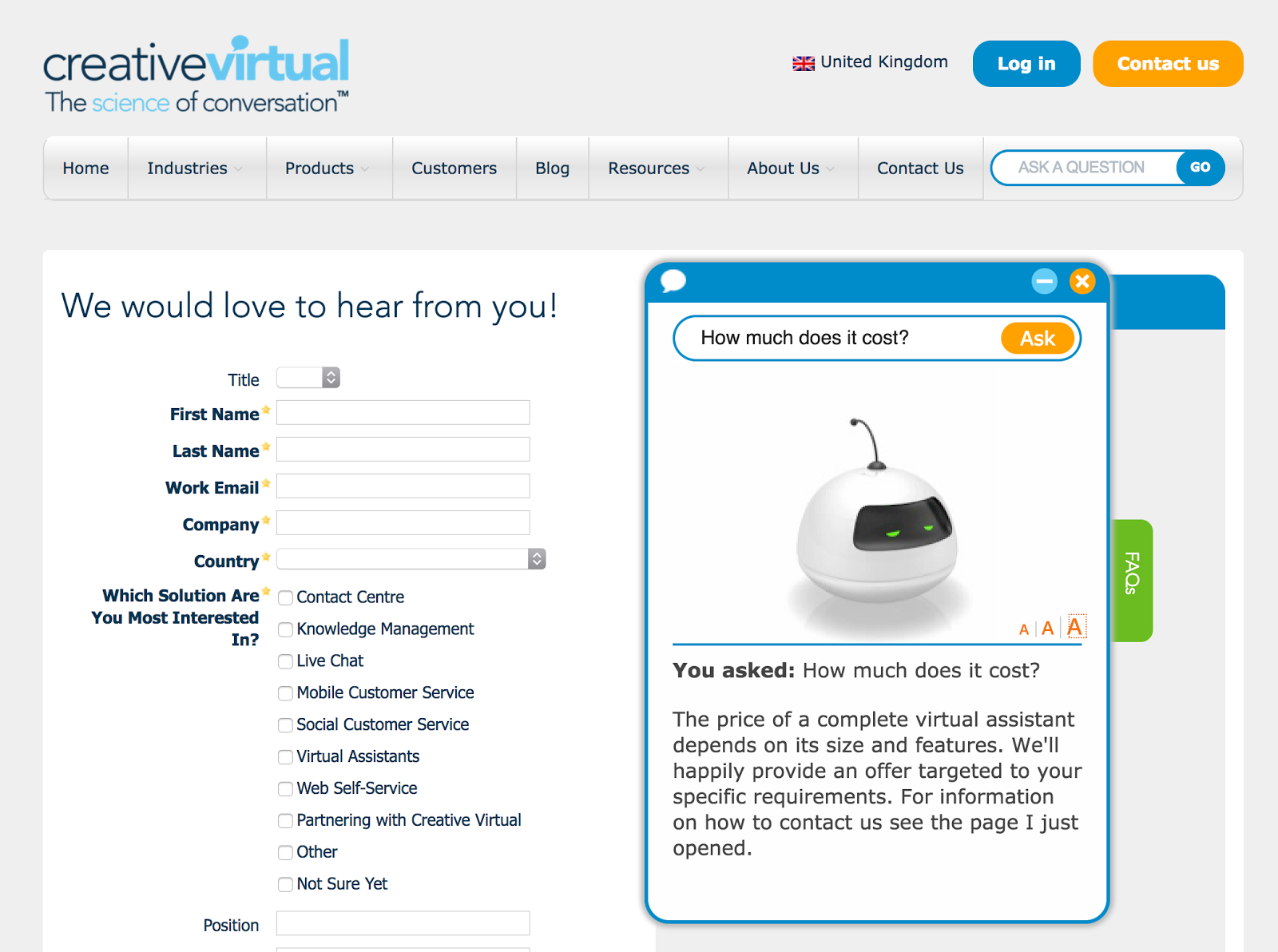 The VCA on Creative Virtual’s site responds to questions,
and will even pull up related webpages in the background

InteliWise offers a range of products from stand-alone VCAs to ones that are fully integrated into call center management suites. They have a VCA that can be programmed to proactively offer assistance depending on a number of variables. 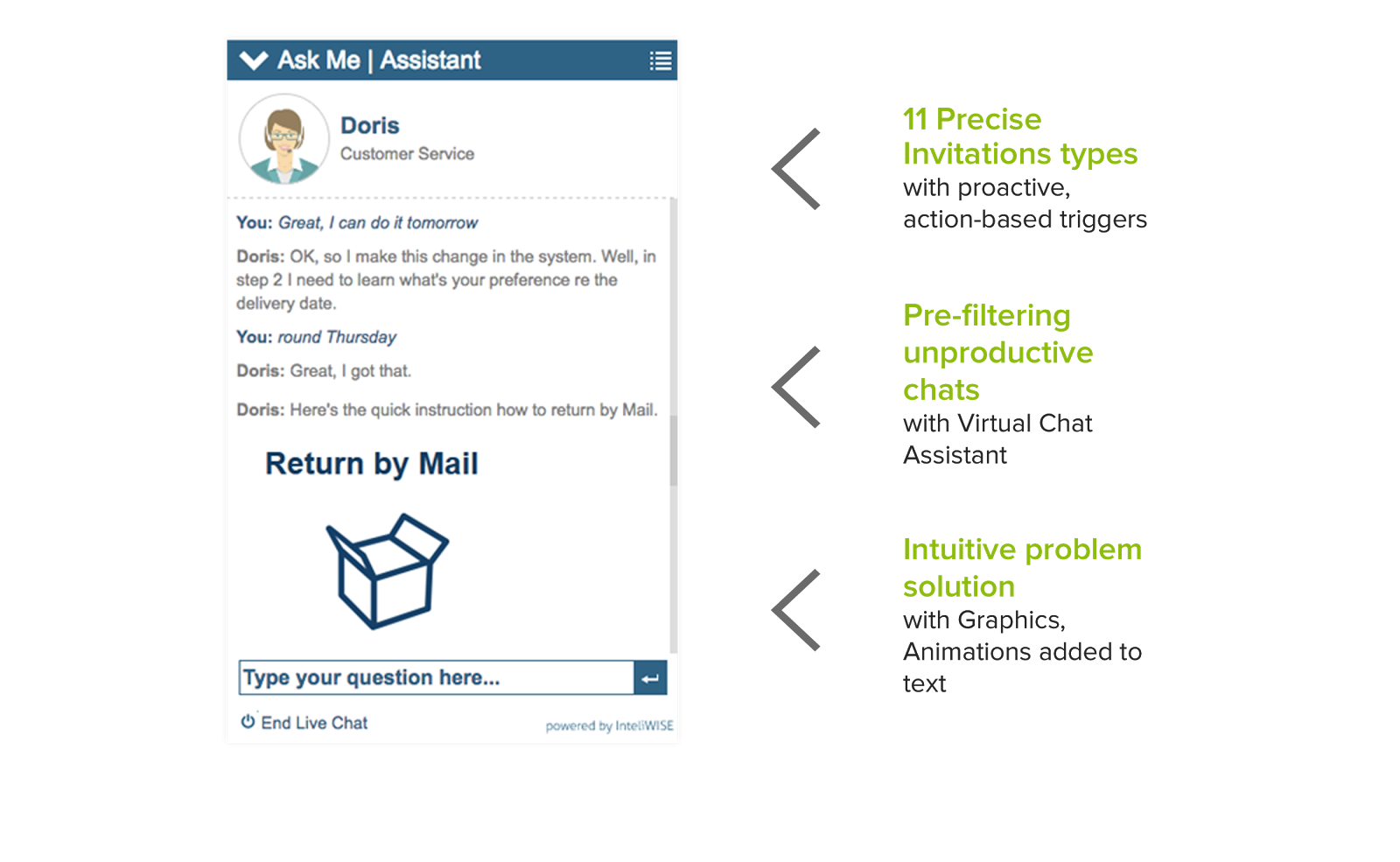 Screenshot and explanation of the Inteliwise LiveChat VCA

Agentbot is a vendor that makes both stand-alone VCA solutions, as well as VCA add-ons that let companies integrate VCA functionality with an existing service platform. 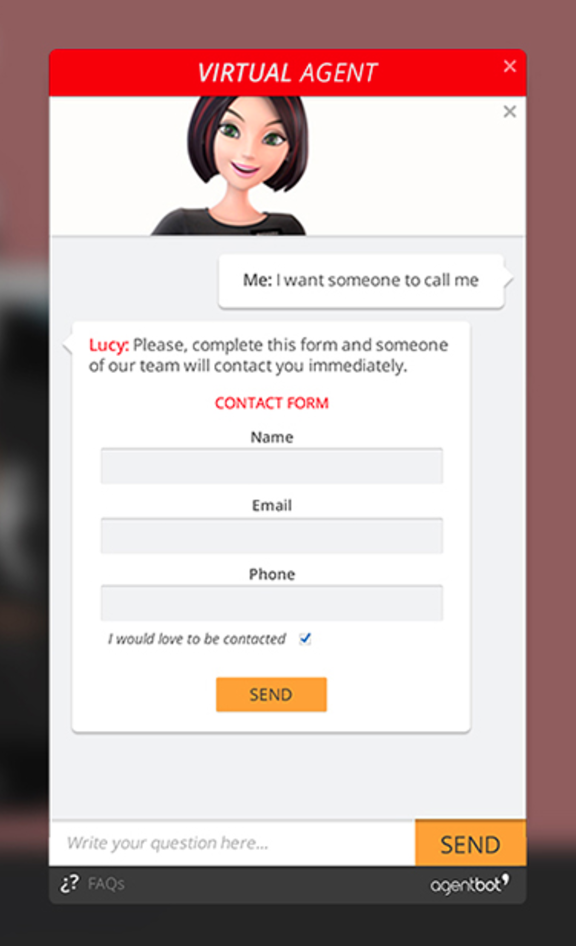 AddressTwo doesn’t offer a virtual customer assistant, but they do offer a virtual employee assistant. Addy, as she’s called, is built into AddressTwo’s CRM suite and automates many of the tasks traditionally required of employees, such as updating contact records with new information.

Check out HighRise for another CRM platform that has a built-in virtual assistant for employees. 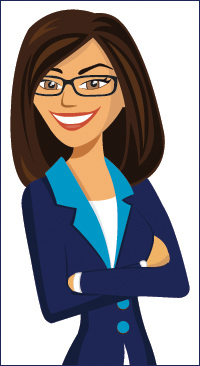 AddressTwo clearly learned from Clippy’s mistakes, as their
virtual assistant, Addy, has a much more businesslike persona

There are even some do-it-yourself VCA options that build upon technology created by some of the biggest names in IT, including Microsoft, Amazon and IBM. These and some other tips for a successful VCA deployment will be covered in the next installment of this report.

Have any questions or need some assistance of your own? Sign up for our newsletter to receive more articles on customer service strategy and technology.

If you’re ready to make the move and learn which software will take your company to the next level, give us a call for a free FastStart Consultation at (844) 852-3639. 5 Cost-Saving Benefits of a Customer Self-Service Knowledge Base 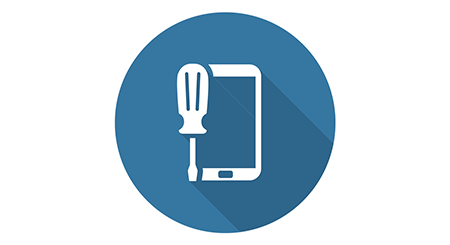