Every year, Software Advice talks with thousands of buyers searching for call center software. These conversations provide us with unparalleled insight into the needs of call centers and the industries that use them.

Nearly Half Are First-Time Buyers

Forty-six percent of the buyers we spoke with had no call center software in place, and were looking to purchase for the first time. Most of these buyers were using manual methods to place, receive and distribute calls. They were using spreadsheets, word processors or pen and paper to track call information.

Forty percent of buyers expressed no preference in deployment model. However, of buyers who specified one deployment model over another, the majority were interested in “Software-as-a-Service (SaaS)” or Web-based systems. SaaS systems are hosted on off-site servers owned and managed by the service providers, rather than on the company’s own servers.

Most of the buyers we spoke with were looking for specific features in their call center software. The most common feature, call recording, was requested by 42 percent of buyers. “Quality assurance” and “employee training” were the most frequently cited reasons for wanting this feature.

Computer-telephone integration (CTI) links a company’s computer database with its phone system, allowing, for example, customers’ information to automatically appear on-screen when they call. As the second most popular feature, CTI was requested by 39 percent of buyers, who frequently explained wanting it for “tracking customer interaction history” and “note taking” purposes.

Though some buyers had simply outgrown or “exceeded the capacity of their current system,” others were looking for software to address specific deficiencies with their existing methods. A large portion of call center software buyers are seeking to improve efficiency (67 percent) and organization (61 percent).

Even Mix of Buyers From Inbound and Outbound Centers

The call center software buyers we spoke with represented a very even mix of inbound and outbound call centers, as well as call centers that perform both functions.

Though it’s common to speak of a monolithic “call center industry,” the reality is that call centers play a role in many industries. The common thread is that they each have a large B2C (business-to-consumer) component, and therefore require frequent calls to and from customers.

Companies in the medical, consulting and IT industries represented nearly 30 percent of the software buyers we spoke with. The largest percentage of our sample was made up of buyers from disparate industries, such as manufacturing, advertising and banking. Each of these industries alone comprised between 4 and 5.9 percent, but did not represent a significant proportion of the total.

This chart shows the annual company revenue of the call center software buyers we included in our sample. Over half of buyers were businesses with $5 million or less in annual revenue. Nine percent were large enterprises with annual revenues greater than $100 million.

This research highlights several important trends in the call center industry. The first is that, like many other industries, the call center industry is shifting towards a preference for SaaS (Web-based software). SaaS is attractive to call center buyers for its advantages of scalability and convenience. There’s generally no need to install anything, the software is updated automatically and most technical issues are handled by the vendor.

SaaS also comes with an attractive price tag: while advanced call center software was once too expensive for small businesses, that’s no longer the case. The second trend we’ve identified is that more small businesses are opting to handle their own call center needs. This is in line with a larger and ongoing national trend: the onshoring of call center jobs. (In the 1990s, call center jobs were shipped to the Philippines and India en masse—but this trend has been largely reversed in the past five years, with many of these jobs being brought back to the U.S.)

We found evidence for this trend in the relatively large proportion of small-business software buyers in our sample: two out of three buyers were from companies with 10 or fewer users. Further, nearly half of the buyers we spoke with were buying call center software for the first time—suggesting that many might be choosing to handle call center tasks in-house that were once outsourced to third parties. 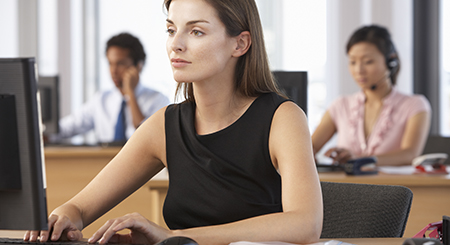