Session Initiation Protocol (SIP) trunking is an Internet-based service that allows Voice over Internet Protocol (VoIP) users to connect local and long-distance calls to and from endpoints in the traditional phone network.

Software Advice surveyed IT decision-makers who have implemented SIP trunking in their organizations to learn more about their experiences.

Based on the data we collected, this report will provide business professionals with the top criteria how to select a SIP provider, as well as best practices for ensuring a successful SIP trunking deployment.

Considerations for Choosing a SIP Provider

One of the primary benefits of VoIP technology is that it allows two users with Internet connections to talk to each other for free (as anyone who has ever used Skype knows).

However, if a VoIP system user wants to make and receive calls to and from a user with traditional voice services, then a SIP provider is necessary in order to connect the call. (SIP is the protocol that controls communications sessions, such as VoIP calls and video meetings.)

Analog and digital “trunks” are business phone lines that are divided to provide extensions for employees, departments and hardware. SIP trunking was designed as a VoIP replacement for analog and digital trunking, as it carries voice calls and other communications over a business’s Internet connection instead of dedicated lines.

If your business relies heavily on voice communications and you’re considering switching to VoIP, you’ll probably need to find a SIP trunking provider.

Gartner reports that savings of up to 50 percent are possible by switching from traditional voice services to SIP trunking. In order to maximize savings and ensure that SIP trunking simplifies life for an organization’s IT team as well as end users, however, businesses first need to know how to plan for a successful SIP trunking deployment.

Provider Decision Is Based on Quality of Security and Support

In order to understand what motivates decisions about SIP trunking—beyond the reductions in total cost of ownership offered by the technology—we asked the IT decision-makers in our sample their primary reason for selecting their SIP provider.

One of the most interesting findings is the focus on security: Nearly one in four respondents say they selected their provider on the basis of that provider’s security capabilities.

One such capability is support for secure real-time transport protocol (SRTP), a codec that allows for the encryption of audio streams. Few SIP providers currently support SRTP, but the option is available if your business model demands encrypted conversations (e.g., if you frequently discuss trade secrets over the phone).

Transport-layer security (TLS), on the other hand, is more widely available. TLS can be used to encrypt the actual SIP messages that control communications sessions (as opposed to the actual content of video calls, voice calls etc.)

This allows businesses to prevent denial-of-service (DOS) attacks that can cripple business phone systems. A majority of the respondents in our sample (58 percent; not listed in the above chart) are currently using TLS.

While security is a major concern for our respondents, quality of support is just as much of a motivating factor when it comes to choosing a SIP provider (22 percent). Effective support can help businesses recover from service outages quickly and scale their phone systems easily.

Pricing models are another major consideration among the respondents in our sample, as they have a direct effect on the telecom budget.

Historically, the dominant pricing model for SIP trunking has been port-based pricing. Under this model, monthly fees for SIP trunking are determined by the number of simultaneous calls that a business usually needs—as opposed to having a dedicated line for each employee, as traditional voice services require.

A number of the respondents in our sample have adopted SIP trunks with port-based pricing, though other pricing models are gaining in popularity (respondents were allowed to select all that apply, and there is considerable overlap between certain pricing models).

Each user can then make and receive an unlimited number of calls. User-based pricing models serve as an alternative to port-based models, in which organizations pay metered rates for calls.

A number of SIP providers also offer certain types of free calls. For example, some offer free calls to other businesses that use their services.

Other providers offer free calls between SIP addresses, since the call never has to travel over the traditional phone network in this scenario. Such offerings are quite popular among the respondents in our sample, with over half currently using SIP providers offering free SIP-to-SIP calls.

Other services factored into the pricing models of organizations in our sample include direct inward dial (DID) numbers, e911 fees and fees for add-on managed services.

DID numbers are telephone numbers assigned by SIP providers to VoIP users to enable them to receive inbound calls from the traditional phone network. Many SIP providers charge monthly fees based on how many such numbers a business provisions.

E911 is a system that notifies emergency services of a VoIP caller’s location when she or he dials 911. Organizations that need the capacity to make emergency calls must remain in compliance with the system.

Finally, many organizations pay SIP providers for additional managed services such as remote management of devices like routers. These services ensure a high level of voice quality and uptime.

Nearly 70% of IT Decision-Makers Have Adopted SIP Trunking

While SIP trunking still hasn’t fully replaced traditional voice services such as analog service and ISDN (Integrated Services for Digital Network), the adoption rate among the IT decision-makers we surveyed is striking, at 69 percent.

Only 10 percent of enterprises have fully migrated to SIP trunking. Based on our results, however, organizations with knowledgeable IT decision-makers who guide purchasing decisions (our sample was screened to only include such respondents) have adopted SIP trunking at a much higher rate than most enterprises.

One thing to note is that our sample included a significant number of smaller organizations, in which SIP trunking deployments are easier (since the overall complexity of their networks is much lower). This may be another reason the adoption rate among our respondents is higher.

Over 90% of SIP Users Satisfied With Audio Quality

Among adopters of SIP trunking, however, we find an extremely high level of satisfaction with audio quality—a combined total of 96 percent of our sample are satisfied, on some level, with the quality of their business’s calls.

Only a single respondent reported being “minimally dissatisfied” with audio quality, and none of our respondents reported significant dissatisfaction. (Because the lone dissatisfied respondent isn’t statistically significant, we dropped the category from the above chart.)

This suggests that business VoIP solutions that incorporate SIP trunking offer a satisfactory level of audio quality for the vast majority of organizations that have implemented them.

One way in which SIP trunking saves organizations money is by combining voice and data services over a single Internet connection, as opposed to paying for both Internet and phone service.

Because phone calls are transmitted over an Internet connection with SIP trunking, businesses need to make sure they dedicate enough bandwidth for voice traffic to prevent dropped calls and quality issues.

A technology known as quality of service (QoS) can help to prioritize voice traffic over other kinds of Internet traffic (e.g., downloads or streaming content).

Notably, most of the organizations in our sample do not have issues with their SIP trunk prioritizing voice traffic on their networks. In fact, more than two out of three experience effectively prioritized voice traffic:

This finding correlates with the high level of satisfaction with audio quality issues reported by our sample, since lack of effective voice traffic prioritization can result in quality problems, including service outages.

SIP trunking thus appears to be increasingly viable for organizations that can’t afford dedicated IT teams to work on voice and data networks, since issues with prioritizing voice traffic are relatively rare.

The major factor affecting service outages for our sample is the overall complexity of the business’s network. As more sites in a corporate network are connected through SIP trunks, the frequency of outages increases slightly.

Provider Outage Frequency
by Number of Sites in Corporate Network

Outages are quite rare among smaller organizations with one or two sites in the corporate network, which suggests that SIP trunking deployments are especially successful for small businesses.

Even in the most complex networks, however, it seems that outages can largely be avoided through careful network engineering: While some large enterprises with more than 20 sites experience frequent issues, nearly a third only encounter problems “rarely.”

Over Half Use a Fully Consolidated SIP Trunking Provider

One way businesses can more easily solve issues with voice services is to consolidate service providers. Businesses can use an existing Internet connection to access a SIP provider’s services—but in this case, if a problem occurs, the business can’t easily determine whether the problem originates in its own network or the SIP provider’s.

For this reason, an increasing number of businesses are purchasing Internet service directly from their SIP provider.

Businesses that choose a cloud-based phone system (a system hosted on the software vendor’s servers, as opposed to those on the business’s premises) also have the option of consolidating their phone system provider with their SIP provider.

In certain cases, it may make sense for organizations to go with separate providers (for instance, if an organization has already invested heavily in on-premise VoIP equipment), but our data suggests that such an arrangement is generally not preferable.

We’ve seen that IT decision-makers in our sample of primarily smaller businesses are adopting SIP trunking at a rate that is much higher than the overall enterprise adoption rate. When selecting providers, decision-makers are guided by concerns with security, support and pricing model.

Issues with audio quality and voice traffic prioritization, which plagued VoIP technology in its early days, seem to have largely been solved—leading to a low overall incidence of quality problems. Such problems are especially infrequent in simple networks consisting of one to two locations.

The substantial economic and operational benefits of SIP trunking, it would seem, are now within reach for small businesses as well as enterprises.

Methodology
To find the data in this report, we conducted a five-day survey of 30 questions, and gathered 208 unique responses from random IT decision-makers. Responses to the survey were collected by our research partner, Lightspeed GMI, with whom Software Advice has no financial relationship. All responses were obtained in a fair and anonymous manner.

Results are representative of our survey sample, not necessarily the population as a whole. Expert commentary solely represents the views of the individual. Chart values are rounded to the nearest whole number. 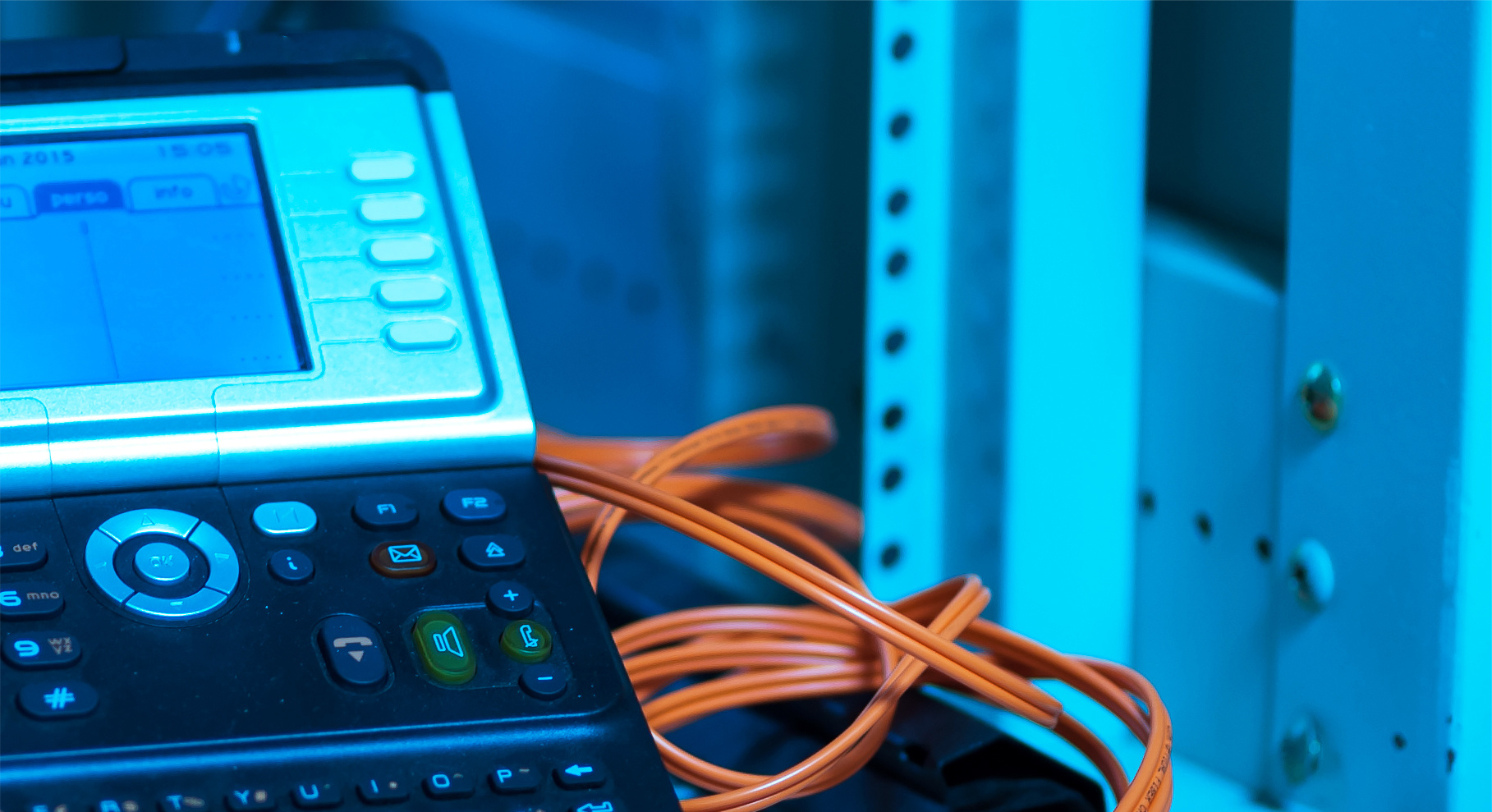 Build Your Small Business Brand With Your Phone System