Every year, Software Advice speaks to hundreds of construction buyers evaluating takeoff software applications. The great majority of these buyers were from small businesses (companies with annual revenues of $100 million or less), providing us with unparalleled insight into their unique needs and motivations.

We recently analyzed a random selection of 385 interactions with these buyers from 2014, to learn their biggest pain points and what features and functionality they want most in new takeoff software.

To provide further insights on these data, I shared our results with Professor of Construction Management Anoop Sattineni of Auburn University. Sattineni’s thoughts on these data are included in the report below.

Most buyers (63 percent) said they were currently using manual methods alone—encompassing a range of tools, such as scales, rulers, price sheets from local material distributors, Excel spreadsheets and printed plans. 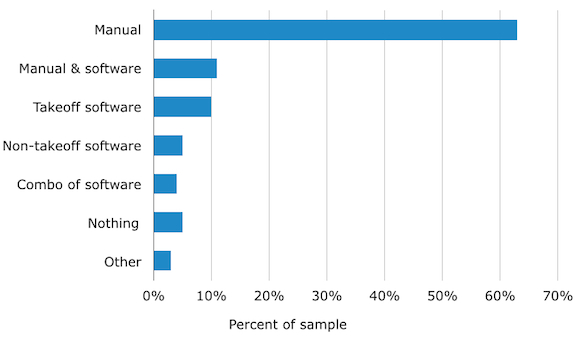 This is surprising because of the potential complexity of takeoff: a set of tasks that require one to itemize material costs and units of labor for the construction of every floor of a building, down to the concrete, windows, walls, flooring, ceilings, electric, plumbing and so on.

Sattineni acknowledges the “flexibility” of a manual tool like Excel for takeoff, but he points out the difficulty in keeping consistent track of such complex information between different members of the organization.

Another finding that surprised us is that only 10 percent of buyers were currently using takeoff software. In other software markets, it’s often the case that buyers are currently using a software they now realize doesn’t fully meet their business needs. Even if you consider those using non-takeoff software (5 percent) or a combination of different softwares (4 percent), buyers in construction still do not come close to the level of adoption typical in other industries.

Sattineni notes a few reasons why construction buyers may not be currently using software. If it’s a general contractor, he says, they may be outsourcing estimating and takeoff to sub-contractors. Sattineni also notes that for small businesses, software can be a big investment. Because the profit margin for a small construction business is so low (Sattineni puts it around 2-3 percent), technology investments are harder to absorb than they are for larger businesses.

However, manual methods can have some undesirable consequences. Sattineni says that companies doing manual takeoff may easily forget something (for example, they may miscount the number of doors or windows), causing them to bid too low, and thus fail to profit—even when they win the bid.

The majority of buyers indicated that they wanted to increase efficiency and accuracy, as well as improve organization. Other than these more general pain points, however, many of buyers’ reasons for seeking software were tied to the business case of their construction company: 28 percent indicated that they wanted to be able to grow their business or execute a greater number of bids. 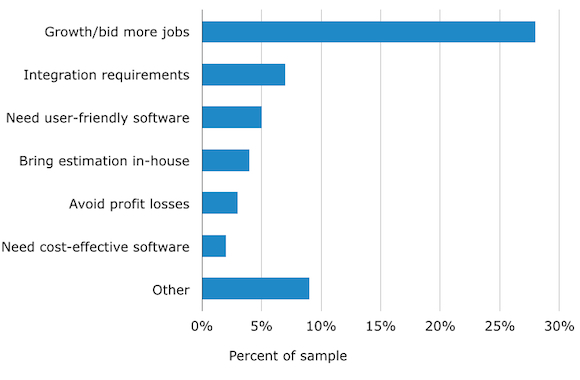 Also connected directly to the business case, 3 percent wanted to avoid profit losses from bidding too low on jobs.

A smaller amount of buyers cited reasons related to the shortcomings of their current software, including integration requirements (7 percent) and a need for a more user-friendly (5 percent) or cost-effective (2 percent) solution than their current one.

Sattineni says that many construction companies only win about 15 to 20 percent of the jobs that they bid on. That means small businesses have to do a great deal of bidding, and he says that estimating and takeoff software is the most efficient way to execute those bids.

“If a small company has grand designs of growing,” says Sattineni, “that’s an investment that they have to make.”

When asked about their integration requirements, 75 percent of construction takeoff software buyers wanted to evaluate integrated software suites, which combine multiple applications in one software package, over individual “best-of-breed” applications. 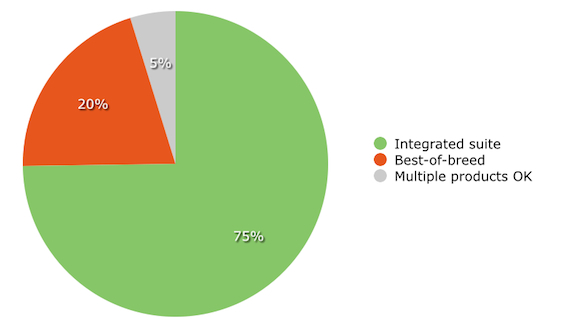 This preference is generally because buyers want estimation and takeoff capabilities in a single package. Best-of-breed applications were requested 21 percent of the time, while 5 percent of buyers reported being okay with evaluating both integrated suite and best-of-breed options.

Most Companies Have Annual Revenues of $5 Million or Less 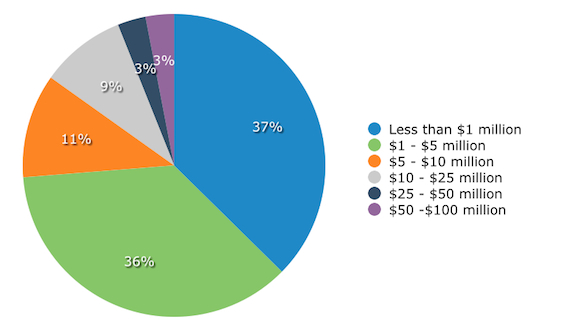 When we drilled deeper into the data to look at the number of employees in buyers’ companies, we found that the majority had 10 or less: 33 percent with two to five employees, 21 percent with six to 10 employees and 7 percent with only one employee. 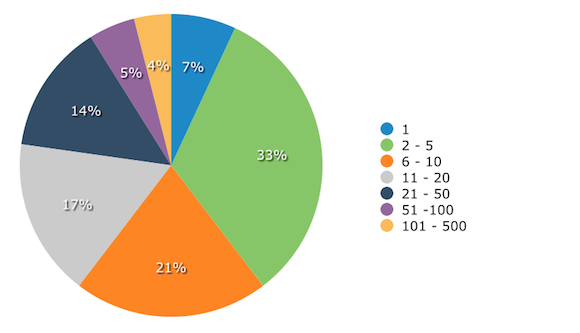 When we compared the industry segments represented by the buyers in our sample, we found that the top three segments were electrical/teledata companies, general contractors and builders of custom homes. These four industries made up a combined 53 percent of our sample.

Coming in at 4 percent were specialty contractors. Finally, an additional 4 percent were from various segments that each, on their own, accounted for less than 1 percent of the sample (the “Other” category).

Our research suggests that while many buyers are still using manual methods, construction companies understand the business case for new software, and are considering purchasing takeoff applications to grow the number of bids they can handle, as well as expand into more complex projects.

Takeoff software can aid small construction businesses by facilitating more accurate bids at a higher volume. Our research found that small businesses that are growing (or want to grow) are looking to invest in the right software solutions. 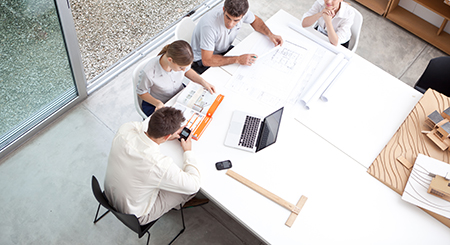