Too many business leaders struggle to make good decisions, and it’s possible you’re one of them.

In a survey of 243 project management professionals, we found nearly half don’t use any specific decision-making techniques to find the best solution. 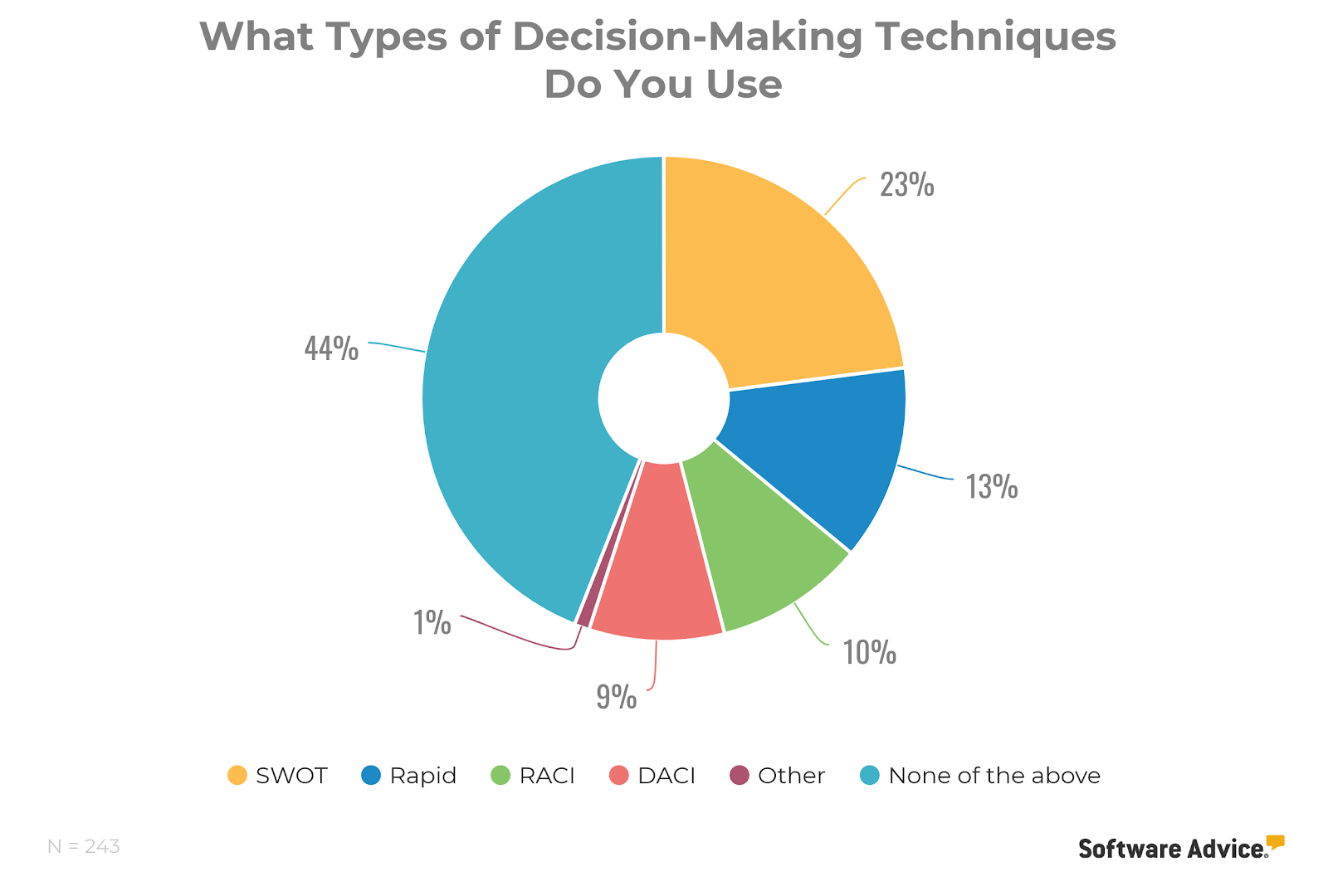 The problem with this lack of approach is it can cause confusion and disengagement when decisions need to be made, or worse—you just spin your wheels and never make a decision. This article can help you:

What is a decision-making framework?
Framework. Methodology. Format. Each of these describe the exercise of defining the problem, identifying stakeholders, gathering the key information, and determining the best solution. A business often will have a preference for one framework over others due to previous success or sometimes just a lack of exposure to other methods.

SWOT is the most popular decision-making framework—should it be?

Twenty-three percent of our respondents say they are using SWOT. But SWOT being the most popular technique comes as a surprise to me. Mainly since it’s excellent at helping define a strategy, but can get confusing if used in the middle of a project and a decision needs to be made.

What is SWOT?
SWOT is an analysis and strategy-creating framework focused on gathering key information in order to make an informed decision. It’s also an acronym for strengths, weaknesses, opportunities, and threats. Key stakeholders typically will gather in a brainstorm-type meeting and complete a four-quadrant SWOT chart.

To get you started, here’s a SWOT chart with the format to use and some questions for each area to get the conversation going. 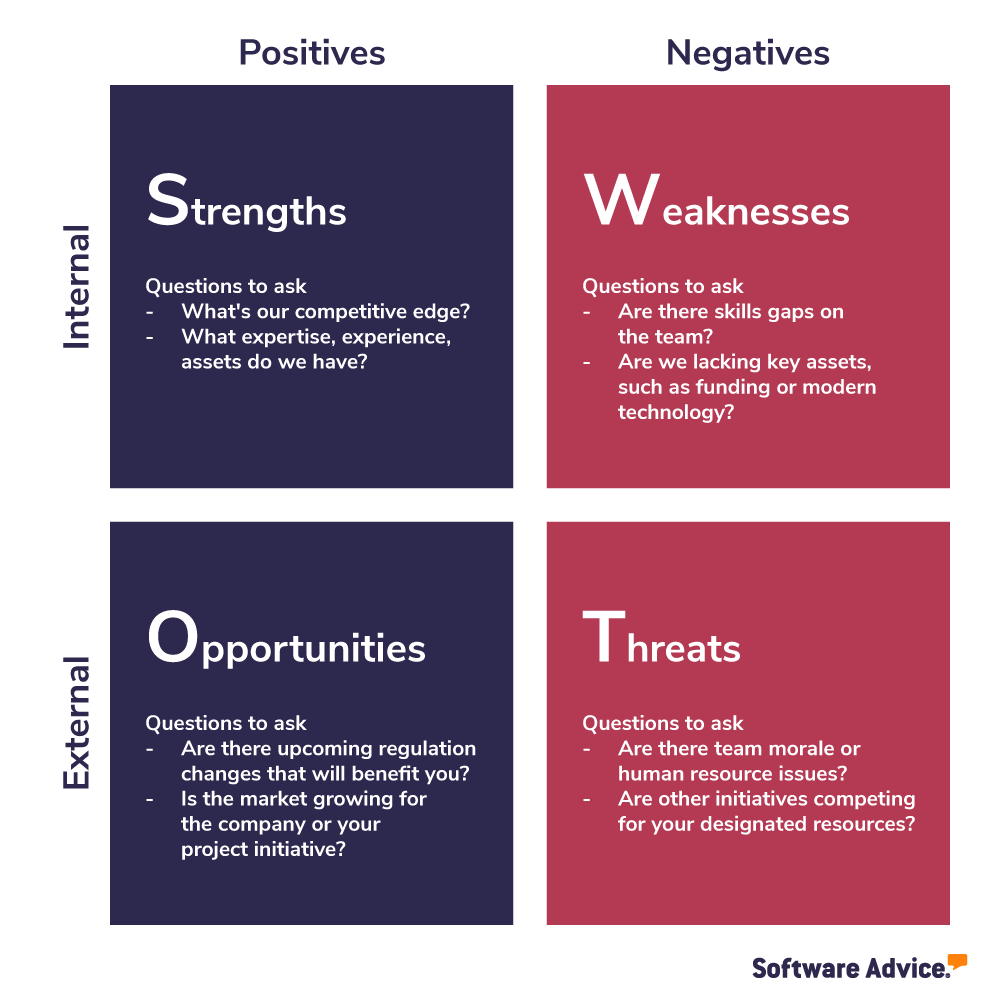 Weaknesses of SWOT in projects

A SWOT analysis is an excellent framework for developing the business case and scope of a project. But once a project is kicked off it lacks two critical components needed to steer the project.

The RAPID framework is also popular, but likely overkill for your project

After SWOT, RAPID was the decision framework of choice at 13%. RAPID is excellent for when a high-risk and highly complex decision needs to be made. But it’s not ideal for the smaller decisions that need to be made during a project.

What is RAPID?
RAPID is an acronym for recommend, agree, perform, input, and decide. Each represents the role the people on the project team will play in the specific decision to be made. A single person is designated as the one who makes the decision, so this helps clear confusion on authority, but the RAPID approach can be surprisingly slow even though it sounds like it should be quick.

Check out my in-depth definition of RAPID decision-making framework here. I also give a detailed explanation of how to decide if RAPID or RACI is best for your project.

RACI is the most underrated decision-making framework

RACI comes in third at 10% of respondents saying they use it. But the biggest surprise in the survey came from another question: How often do you use a RACI chart in projects?

Aaahh!!! The real monster! (That’s a vintage cartoon reference for those of you in the know.) This chart is so shocking because nearly 2/3 of respondents never use RACI charts—and this lack could very well be the root cause of frustration and confusion in how decisions are made in the workplace.

What is RACI?
RACI stands for responsible, accountable, consulted, and informed and each represents the role a named person plays. Each major milestone of a project gets its own assignment of roles. One person is named as the accountable party (aka the “decider”) and this is where RACI sets itself apart from RAPID and SWOT.

I’ve written a how to and analysis on RACI charts that I recommend you check out next. But here are some highlights as to why a RACI matrix is what your project is missing.

Well there you have it! Project management business professionals are out there struggling with effective decision making, and it’s likely you’re one of them.

I hope this article helped shed light on how a SWOT analysis or the RAPID technique may be negatively impacting the decision-making process in your projects. And maybe now you’re a major RACI fan like me.

I’d love to know your thoughts! Whether on SWOT, RACI, project management software, or project best practices—tweet me @AnalystOlivia.

Learn how project management software can help you
Compare Software 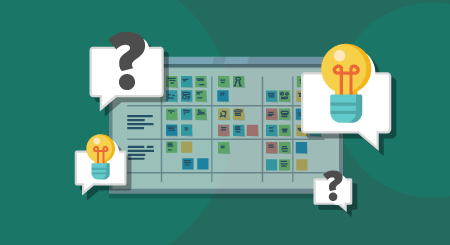 How To Get Your Team To Collaborate Using Your PM Tool Learn how project management software can help you