Women Get Work Done: How to Diversify Your Hiring

According to the U.S. Department of Labor (DOL), women comprise about 47 percent of the workforce and own 10 million businesses. In 2016, 33.7 percent of women completed four years or more of college compared to 33.6 percent of men. They’re also more likely to have earned a bachelor’s degree by age 29 (34 percent) than men (26 percent).

For all the progress, women still earn 83 percent of what men earn.

A report from the American Association of University Women (AAUW) says that the rate of change in the wage gap since 2001 means women won’t reach pay equity until 2119!

With few women in leadership positions—there are only 32 female CEOs in the Fortune 500—will equality remain just a dream for women in the U.S. economy?

Where Workplaces Are Still Failing Women

With greater dependence on technology in virtually every industry, the DOL expects that there’ll be 1.4 million new jobs for “computer specialists” by 2020. But Gartner’s 2016 annual CIO survey found that 66 percent of CIOs believe they lack qualified IT professionals.

Gartner’s report, “Diversity’s Role in an Effective Digital Workplace Program” (content available to Gartner clients), notes that there just isn’t enough talent available to keep up with the rate at which tech jobs are being generated. Women can make up for this talent gap, but they constitute only 18 percent of computer science graduates today.

A Stanford study of recruitment drives at tech universities found that women attendees experienced sexist behavior and noted that there were few prominent female tech professionals in attendance.

Instead, women were relegated to minor speaking roles and were more commonly serving non-technical functions such as distributing food and swag. Women attendees noted that male presenters commonly made sexist remarks, and that female presenters were often interrupted by men in attendance.

The relatively small number of women who complete degrees in technical fields often face a hostile work environment that’s built to let them down.

To find out the kind of discrimination they face, I surveyed some of my former female colleagues in the software industry. Many said that discrimination against female engineers has followed them through college, and throughout their careers.

Here are some of the common things they’ve heard:

Many women have been asked this question during job interviews, a double-standard which is both inappropriate and illegal for potential employers to ask. My respondents believe that their answer has influenced whether a company would hire them or not, regardless of their capabilities.

One of the greatest factors affecting performance and promotion is when women choose to have kids, as they risk pausing their career growth. In fact, there have been many cases when pregnant women were wrongfully terminated and the courts ruled in their favor. Law identifies this behavior as a form of discrimination.

Having empathy shouldn’t restrict one’s job prospects to customer support or process-based roles. Your emotional quotient determines whether you’re a great leader or not. So restricting women to certain roles stunts their professional growth and doesn’t give them the opportunity to showcase their skill set nor learn new ones.

Many people expect women to take care of the home and kids while the same’s not expected of men. The Bureau of Labor Statistics found that 85 percent of women do household activities (housework, cooking, lawn care, home management) compared with 69 percent men. This can cause a stark imbalance in women’s work and personal lives, and perpetuates attitudes in the workplace that devalue their achievements.

The women I spoke with noted that a workplace that embraces different genders, races, geographies and economic backgrounds brings a wider talent pool that accelerates innovation. They told me that given the same opportunities to learn and progress as men, female employees move up the ladder faster, if not equally, than men.

Why You Need More Women in the Workplace

There are many examples of businesses thriving when more women are on board. Some of the most successful ventures in Google were spearheaded by women. For example, current YouTube CEO Susan Wojcicki helped build AdWords and AdSense and pushed for the YouTube acquisition. Today, those stand as Google’s highest revenue-earning products.

Another famous Google alumni is Lean In author Sheryl Sandberg, a leading advocate of women empowerment in the workplace.

She states that the lack of women in leadership is caused by biases that perceive males to be more competent than females. These biases mean men get hired and promoted more often women do in most industries.

But Sandberg notes that it’s possible to check our biases at the door and give women the opportunities they deserve. Start with acknowledging—using available data—that women are underrepresented or not promoted at the same rate as men in the company. Managers need to have an eye on diversity, and promote it as a cultural value.

It’s also important to focus on diversity in general, because women of color experience even greater challenges. Sandberg notes that businesses can’t afford to leave talent on the sidelines with the fierce competition in the marketplace and a shortage of talent.

So, here’s a radical thought for this year: Hire women. Promote women. Praise women. Treat women equally. We need them to get work done.

If women get a chance to work to their full potential, i.e., have an equal role to men across all roles, they’ll add $28 trillion to the global GDP by 2025.

Individually, businesses benefit from diversity and inclusion programs. A 2014 MIT study on workplace diversity noted that when offices are split evenly along gender lines, revenue can increase by as much as 41 percent!

An incentive to actively promote diversity and inclusion is that you’ll attract more employees who bring new and innovative ideas. Research shows that 80 percent of U.S. employees consider inclusion programs as an important factor when choosing an employer.

Cloverpop found that diverse teams comprising of different ages, genders and geographies make better business decisions 87 percent of the time. And boards with a higher than average number of women outperformed companies with fewer than the average percentage by 36 percent.

One business taking these numbers seriously is Evite. Evite’s employee demographic is 60 percent female and the CEO attributes it to diverse thinking at the leadership level.

Here’s how they’ve done it:

Evite doesn’t practice diversity for its own sake. Their practices impact both the company’s bottom line, and help with their recruiting efforts. Evite claims that this approach is what led to it being in Diversity, Inc.’s top 10 percent of diverse companies.

How to Increase Diversity at Your Business

Now, let’s see how you can achieve diversity in your business. Here are some action steps that can help you get started on the right foot:

Set the right hiring goals: Evite doesn’t make diversity a business goal, and if you follow their example, you can be perceived as a fair employer once you achieve workforce diversity. However, you can also choose to set diversity as a business goal for the HR team and push for the promotion of more females to leadership roles.

The pros of this approach are that you can push up your numbers in one go. However, the cons are that employees and candidates can view this as a token gesture. Gartner states that leaders should focus on inclusion, rather than simple diversity programs.

This way a wide range of people, from different races, genders and cultural backgrounds see equal opportunities. Shift your goal from just balancing the male-female ratio to be a reflection of the current society—multicultural, multi-ethnic and multi-lingual.

Gartner’s research shows that inclusion can improve a company’s performance through shared outcomes and values for all the teams.

Write about the job, not the candidate: Job descriptions are often biased in their wording. Sheryl Sandberg notes that women apply for jobs when they meet all criteria but men apply regardless of meeting only a few. Women are also not as likely to brag about their accomplishments like men sometimes do.

Glassdoor notes that “excessive use of superlatives such as ‘expert’, ‘superior’ and ‘world class’ can turn off female candidates who are more collaborative than competitive in nature.” It recommends using gender-neutral titles and pronouns (you instead of he), limiting the number of requirements, noting the family-friendly benefits and talking about your work culture to show your commitment to diversity.

On the flip side, LinkedIn gives the candidates a view of your company and is a great platform to showcase your cultural initiatives. So, you’re not the only one making judgments there, others are also judging you. That’s why you need a great profile to send the right message and attract the best diverse talent.

In our buyer’s guide for the top job board software, we identified matching engine as a key feature. This helps recruiters match the key skills for an available job with the skills listed on candidates’ resumes. Instead of searching for “go-getter attitude” search for years of experience, role title etc., to automatically get the closest matches.

Filter candidates fairly: Once you start receiving applications, it’s important to filter them fairly. Shonda Rimes found that her male and female staff chose more women and people of color when their names are removed. While this may seem extreme, it has worked in many scenarios and gives everyone a fair chance.

Our report on biases, “Everyone Has Hiring Bias—Even You,” notes the 10 types of cognitive biases you should look out for. As an employer, you should actively seek to get rid of these biases or at least call out people when you see an incident of bias.

In her book Brotopia: Breaking Up the Boys’ Club of Silicon Valley, Bloomberg host Emily Chang takes the example of Google, which started with the idea of hiring and promoting more women.

But mass recruiting from the same colleges that other Silicon Valley companies also hired from restricted the pool to white male candidates. It’s resulted in multiple lawsuits of discrimination against women and the infamous James Damore case, which saw Google “nurturing” conservative ideas that women are inherently inferior to men.

So, the good intentions of Google’s founders did not trickle down to its hiring managers, who ended up applying their biases and hired more men than women. And checking these biases took a backseat during unprecedented growth.

Unfortunately, this has resulted in a massive PR backlash that Google will have to pay dearly to fix.

Our report on how to improve your recruitment process discusses the various tools hiring managers can use to assess candidates. With the help of software to track candidate progress, test scores, interview schedules, reference checks and even onboarding, you can have a transparent and highly efficient hiring process.

As an employer, this will help you gain your employees’ confidence, which will show in their recommendations on forums and to their friends or acquaintances. In addition to inclusion programs, you should focus on motivating employees with the right tactics so that you’re able to retain your diverse workforce.

So, on this International Women’s Day, pledge to be a better employer and create an inclusive workplace that celebrates diversity through its employees.

For example, Grubhub is celebrating Women’s History Month by highlighting female-run restaurants across the country. The map of these restaurants encourages foodies to support the establishments closest to them. It’s a step in the right direction for women empowerment and their economic growth. 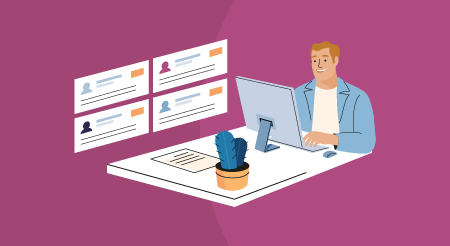 3 Recruitment Strategies SMBs Can Use to Tackle Hiring Woes HR Challenges: 3 Real-Life Examples That Will Transform Your Diversity Practices