In collaboration with leading market research company Research Now, Software Advice has conducted its annual electronic health records (EHR) survey. This survey polled users of EHR software, asking questions about which system they use, their level of satisfaction and the key benefits and challenges they face.

We collected nearly 600 responses in 2014 from users from a diverse range of medical specialties and practice sizes to discover the top EHR software user trends. Here’s what we found.

Despite an increase in the availability of mobile applications offered by EHR vendors, a majority of users were accessing their EHR from a desktop or laptop computer (which, in a clinical setting, is typically attached to a cart—thus limiting mobility).

Only 26 percent of users were accessing their EHR from a tablet or smartphone, compared to a combined 76 percent using desktops or laptops. Users were allowed to select multiple devices, so responses were non-exclusive.

Despite the prevalence of computer usage, those in our sample who were using tablets and smartphones expressed higher levels of overall satisfaction with their EHR system. Fifty-eight percent of users who accessed their EHR from a mobile device were “very satisfied” with their EHR, compared to 28 percent of non-mobile users.

Difficulty in learning to use the system and with decreased productivity were two areas where the differences between mobile and non-mobile users were greatest.

Only 39 percent of mobile users expressed that learning how to use their EHR system was challenging, versus 58 percent of non-mobile users.

This discrepancy could be attributed in part to mobile users taking their devices home with them to learn the system outside of normal working hours—and in part to the fact that 47 percent of physicians already use mobile devices for clinical purposes.

Interestingly, mobile users also reported fewer problems with their EHR decreasing productivity: 73 percent said this was not a challenge, compared to just 42 percent of non-mobile users who said the same.

Effect of Slowed Productivity Due to EHR

A 2013 survey by Black Book Rankings showed that 89 percent of primary care and internal medicine physicians were already using their smartphones to communicate with hospital staff.

Since many physicians are already familiar with using mobile devices to improve communication, it follows that EHR users’ productivity would be less impacted when accessing the software via a mobile application.

Thus, the familiarity and portability of mobile devices seems to go a long way towards ensuring doctors’ ultimate satisfaction with their EHR.

Only 5 percent of users plan on decreasing their investment, while 13 percent stated that they were unsure. 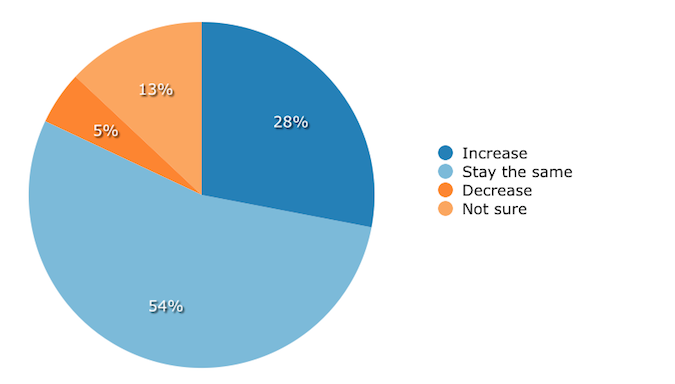 This is in line with our 2014 EHR BuyerView: We found that an increasing number of buyers were looking to replace existing EHR software, which may account for a portion of the 28 percent of users looking to increase their investment. Next, we asked physicians which EHR modules and applications they planned to invest in more heavily in the future.

As we’ve observed previously, physicians surveyed were most interested in increasing their investment in patient portals (36 percent), defined by healthIT.gov as “secure online website[s] that [give] patients convenient 24-hour access to personal health information.”

Patient portals are a requirement for achieving Meaningful Use Stage 2, and increased investment demonstrates a noticeable push to meet 2015 government deadlines.

Furthermore, many practices are hoping that providing patients access to their medical records via a patient portal will increase patient engagement (more on this later). 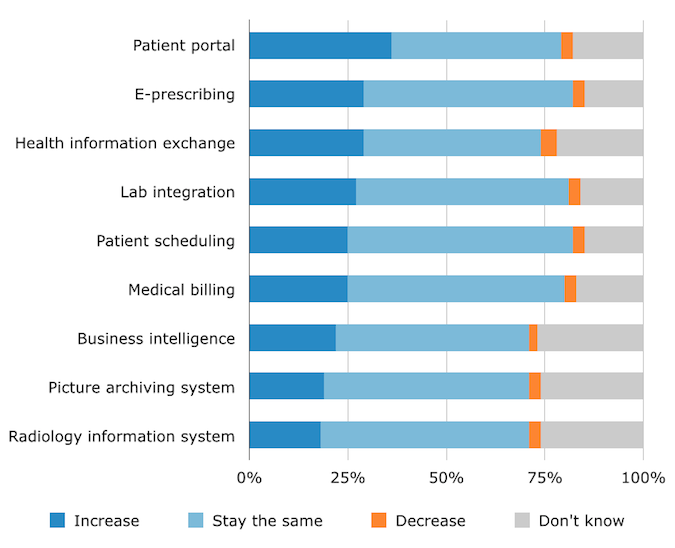 Electronic prescribing (“e-prescribing”), included as part of Meaningful Use Stage 1 requirements, has risen in priority since our early results report; 29 percent of users say they plan to invest more heavily in this.

The true value of e-prescribing, however, lies in its ability to protect patients from harmful medication mixups. E-prescribing has been shown to decrease the rate of prescribing errors, which are the most prevalent type of medication error among primary care practices.

Twenty-nine percent of users in our sample indicated that they would be investing more in these applications.

Business intelligence and the large amount of data it generates have been shown to cut healthcare costs and improve patient care, but a system with these pricier, more advanced data-analytic capabilities may not yet be considered a worthwhile investment for smaller practices.

Over half of users surveyed (56 percent) responded that integrating their EHR with other systems presented a “major” or “moderate challenge.”

This is a common complaint among healthcare professionals, as integrating data from external systems, such as outside laboratories, state/government organizations and other medical systems using a different EHR, has proven more challenging for many organizations. 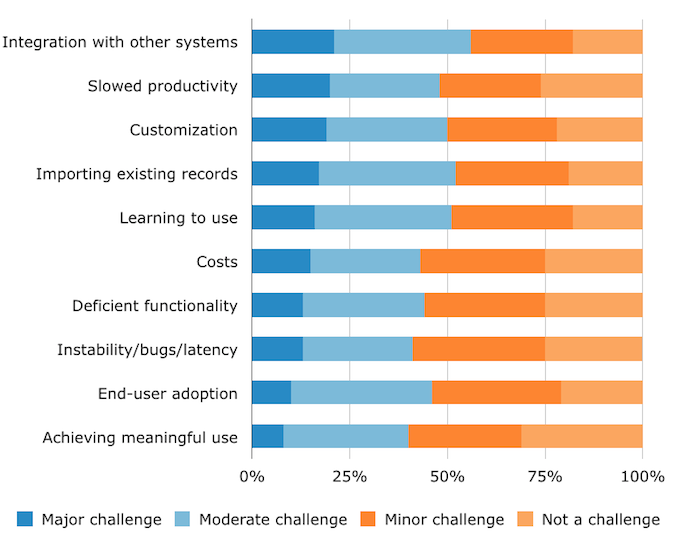 Problems with EHRs slowing productivity—reported by 49 percent of users—have been part of the discourse surrounding EHRs since the passage of the HITECH Act in 2009. Part of this problem could be due to practices using non-portable devices to access their EHR, as described above.

Further, a UC Davis study from 2010 attributed losses in productivity to adopting an EHR that had not been customized for the user’s specialty, a problem that can be addressed by using a system with specialty-specific templates.

Indeed, customization itself was the next most challenging item, selected by exactly half of respondents—suggesting that these templates are not being widely used.

Significantly fewer users were concerned with instability, bugs and latency; end-user adoption; and achieving Meaningful Use. Although the Center for Medicare and Medicaid Services has reported a lower than expected number of doctors and hospitals attesting for Meaningful Use Stage 2, only 32 percent responded that they believed meeting Meaningful Use was a challenge.

Since deadlines to achieve Stage 2 have been extended several times already, EHR users may feel less urgency due to the belief they could again be granted more time.

Unsurprisingly, a majority of respondents indicated that the key benefits their EHR delivered were improved records that were easier to access (87 percent said this benefit was delivered “well” or “very well”) and to interpret (85 percent said the same). 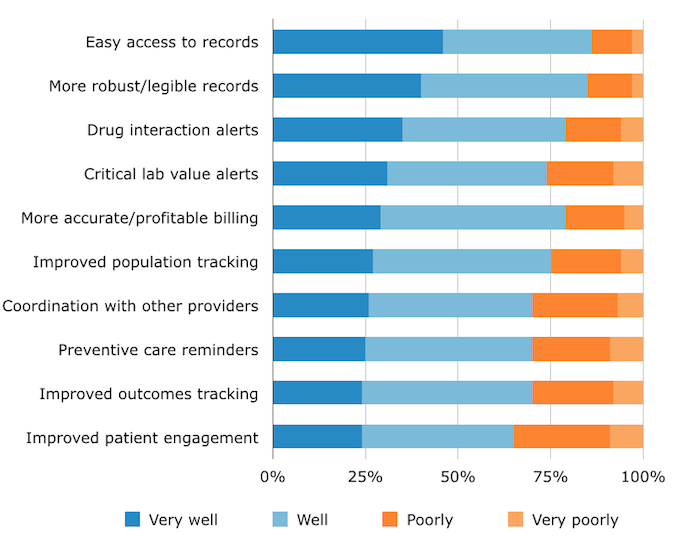 Physicians were significantly less satisfied with another type of alert: preventive care reminders. This indicates that vendors should seek to improve this feature in order to better assist physicians in scheduling preventative care appointments, a key component of the Affordable Care Act.

Users were also dissatisfied with their EHR’s ability to improve patient engagement, which has been prioritized in Meaningful Use Stage 2 requirements. Based on our future investment results, it appears that physicians are attempting to solve this problem by increasing their investment in patient portals.

We found that users from smaller practices were more satisfied with their EHR system than those from larger practices. Forty-three percent of small-practice users reported being “very satisfied,” compared to just 31 percent of large practices that said the same. 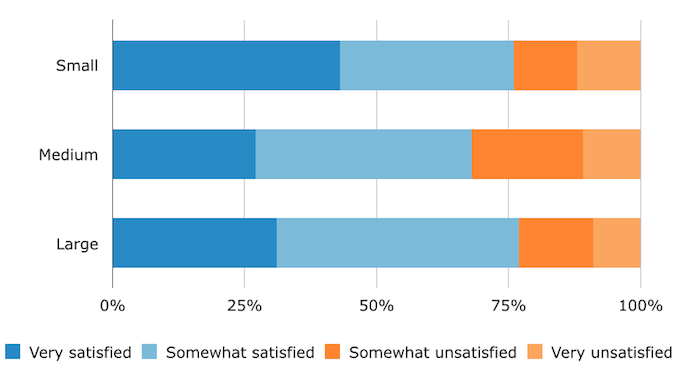 This is in line with other findings across the industry, in which smaller organizations of 50 or fewer practitioners reported being more satisfied with the implementation of their EHR system than larger ones.

Despite the challenges faced by some users, overall satisfaction rates were high. Seventy-five percent of users were at least “somewhat satisfied” with their EHR system, with 35 percent reporting that they were “very satisfied.” 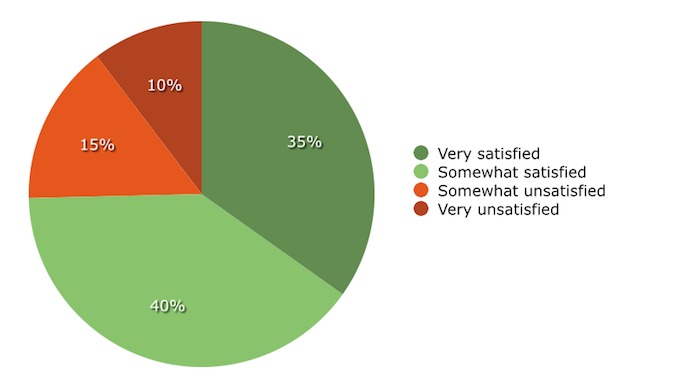 Our respondents represented a variety of medical specialties, practice sizes and EHR systems used. EpicCare EMR was used by 15 percent of respondents—aligning with the 20 percent share of the ambulatory EHR market this product had in our EHR Meaningful Use Market Share report earlier this year. 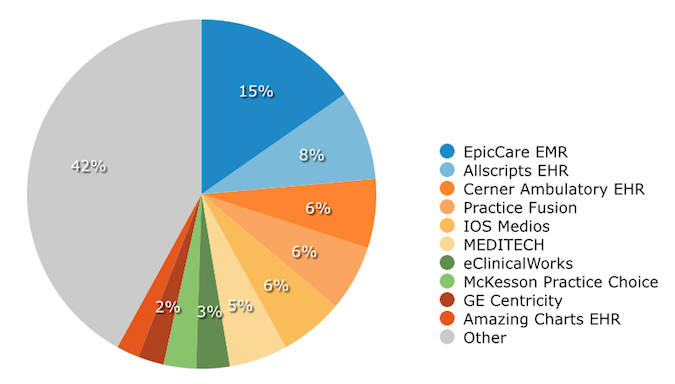 Forty-two percent of responses came from users at small practices, defined as those with fewer than three doctors on staff. Medium-sized practices, with between four and 10 doctors, made up 26 percent of the sample, and large practices of 11 or more doctors comprised 32 percent. 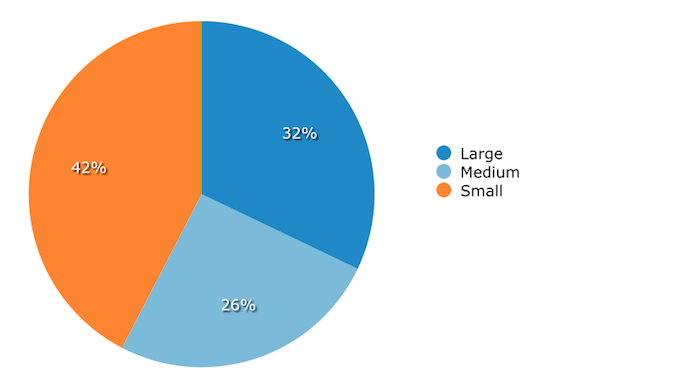 Eighteen percent of users surveyed specialized in internal medicine or primary care. Doctors from health centers and “multiple specialties” were next, with 7 and 6 percent, respectively. Forty-one percent of survey takers did not list a specialty, and are represented as “other” in the figure below. 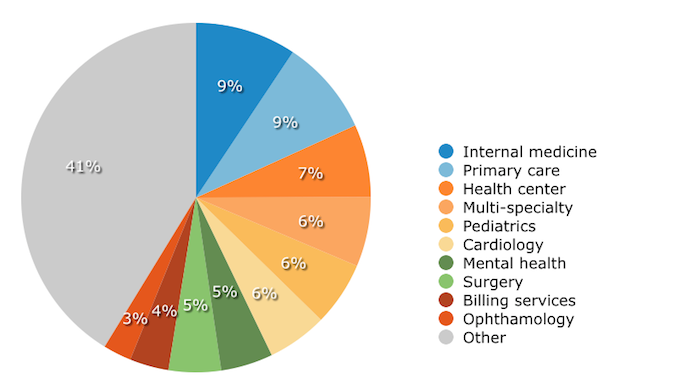 Methodology
We used several approaches to collect responses for this survey. First, we emailed survey invitations to EHR software buyers who contacted Software Advice for guidance in their software-selection process. We also posted the survey on social networking sites, including Twitter, LinkedIn and Google Plus.

Additionally, we contacted leading EHR software vendors and asked them to share the survey with their users. These included vendors that both are and are not current clients of Software Advice, but client status was not used as a basis for inclusion of responses.

Finally, the majority of the responses to the survey were obtained by our third-party research partner, Research Now. Are Patients Ready for EHR Interoperability? 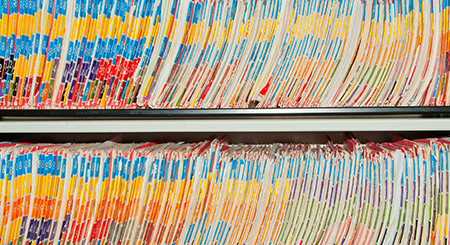 Get a FREE Custom Quote for 5 Leading EHR Systems