When it comes to recruiting talent through Twitter, it seems that many companies aren’t having the success they want. Twitter has over 320 million active users—nearly three times more than LinkedIn—but only 14 percent of recruiters say they have actually made a hire through the platform.

An annual study by the Pew Research Center notes that Twitter is a popular social network for groups that recruiters covet:

The opportunity is there. Small and midsize businesses (SMBs) just need to capitalize.

To find out how they can do that, we turned to the recruiting-specific handles of Fortune 500 companies to learn how the most successful companies in the world are using Twitter for recruiting.

Paired with a survey of nearly 200 job seekers, recruiters can learn best practices to effectively engage talent through this medium.

Two-Thirds of Job Seekers Use Twitter in Their Search

“Have You Used Twitter in Your Job Search in the Past Six Months?” 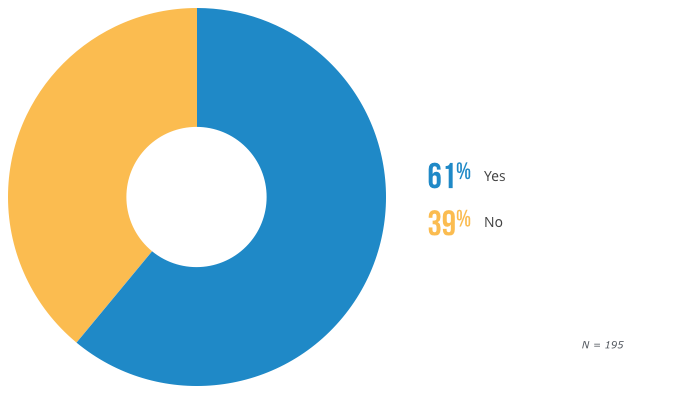 Given that job seekers are inclined to go straight to a company’s profile, companies would be wise to make these profiles appealing to encourage more job seekers to follow them.

According to Adam Heagy, president of Interactive Recruiting Consultants, this means making Twitter profiles “concise and direct” in describing their business and the actions they want potential applicants to take next, such as visiting a careers page.

This is where companies need to decide if they are going to recruit through their primary Twitter handle, or create a separate one for recruiting purposes. Jim Milton, vice president of product marketing for recruiting software platform SmartRecruiters, explains when you might prefer one option over the other: Job Seekers Split On the Effectiveness of Twitter Recruiting Efforts

To understand where recruiters can do better, we asked our Twitter-using job seekers how effectively they think companies are at using the social media site to engage them.

If companies focus too much on marketing themselves and not enough on open positions, interested job seekers may find a job somewhere else. And if companies only post job listings, they’re missing out on what Heagy calls the “social aspect” of engaging job seekers.

Recruiters should also make sure to stay in communication with curious Twitter users. Social media management platforms make it easy to not only respond to all incoming messages, but to track certain words or phrases for proactive outreach on hot leads.

For example, companies eager to fill an engineer position can track all tweets with the words “engineering job” to find any users who tweeted about looking for such a job and respond with a link to their careers page. 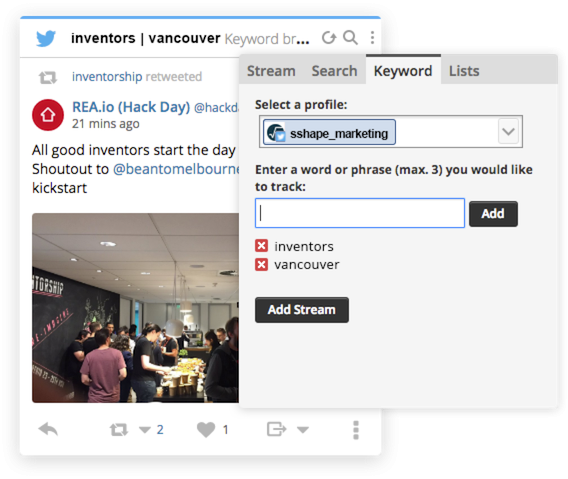 Individual recruiters can also use Twitter to build a personal following, market themselves as a trusted resource and gain legitimacy for the clients and companies they work for. Both Milton and Heagy advocate this strategy.

In fact, Heagy says he has amassed over 1,300 followers on his individual account, @ircstaff, through a blended approach of tweeting about job listings and local technology conferences, as well as general posts to “share and educate anyone [who] chooses to follow me on the job and technology marketplace,” he explains.

To find out more about how companies should be using Twitter, we looked at 50 recruiting-specific handles from Fortune 500 companies. We tracked over 3,800 tweets over a week’s time from these accounts, then pulled a random sample of 200 to analyze further.

What did we learn? Well, for one, Fortune 500 companies tweet out a ton of job openings. A whopping 88 percent of the tweets we analyzed were for job openings. But that’s not all that gets tweeted. Some tweets promote company events (4 percent), market the company’s work environment and job perks (4 percent) or highlight a specific employee (2 percent). Highlighting individual employees is a great way to personalize a business on Twitter. For example, using the #LifeAtATT hashtag, AT&T employees describe their job responsibilities, recommend qualities that candidates should have to succeed and explain some of the reasons they like working there.

Twitter is also a great medium for alerting followers of upcoming in-person recruiting events, or for live-tweeting company events that prospective job candidates might be interested in, such as conference presentations.

As Milton explains, companies should be using Twitter to keep themselves fresh in the minds of potential talent when they do decide to look for work.

“It’s less about posting a job and hoping for an application today,” Milton says. “It’s more about getting that group of followers, and then using content to engage them over time. The hope is that at some point down the road the timing will be right [and the candidate will actually apply for a job].”

Because Twitter users don’t often make the direct path from follower to applicant, companies can use applicant tracking systems (ATSs) with Twitter integration to track the number of people who actually apply this way. Then, Milton explains, they can easily compare Twitter hires to the number of hires from other recruiting sources.

Almost All Fortune 500 Tweets Have Hashtags

Besides the 140-character limit, Twitter is also famous for the hashtag: a word a phrase preceded by “#” used to group tweets about similar topics together. If you’re not using hashtags in your recruiting tweets, you should. Almost all of the tweets from Fortune 500 recruiting handles use hashtags (95 percent). 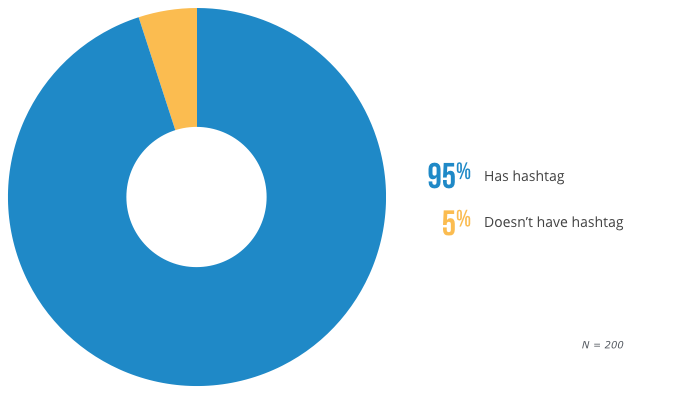 Digging deeper, the tweets with hashtags in our sample most commonly use a general job-related term (e.g., #hiring), the location of a job (e.g., #Dallas) or the type of job being highlighted (e.g., #Engineering). 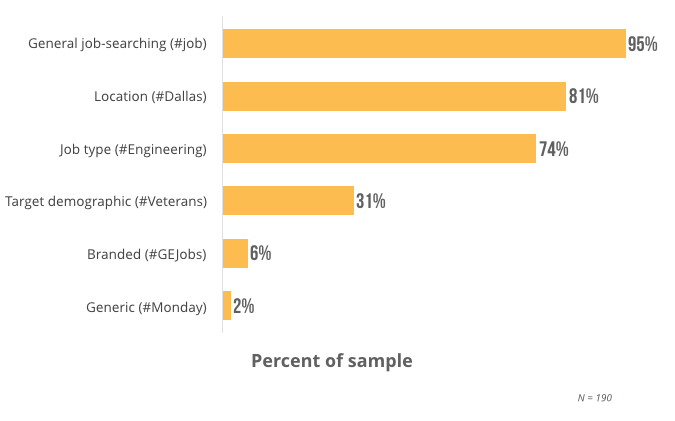 Even though only 31 percent of job seekers say they use Twitter to search for job-related hashtags (per our findings above), companies are wise to include them. In a previous Software Advice study, we learned that marketers consider using hashtags among the most important tactics for optimizing content on social media, second only to using images.

Including hashtags in tweets requires no extra effort, and can help expand a company’s reach beyond its dedicated followers. Indeed, Heagy says that hashtags can help companies “cast as wide of a net as possible to get the message out to that many more people.”

Hashtags can not only expand a company’s job-seeking audience, but can define it as well. By including hashtags related to the type of job (#BusinessMgmt), location (#BowlingGreen) or even target demographic (#Veterans), companies can make sure their job listing attracts the specific type of applicant they want.

Whether recruiters use personal or departmental Twitter accounts to attract talent or work with the marketing department to, as Milton describes it, “slip tweets in the stream” of the customer-facing Twitter handle, they must stay socially active to keep their desired audience engaged.

But how active should they be? Looking at our sample of Fortune 500 handles, it depends. Thirty-two percent of Fortune 500 recruiting handles tweet less than once per day on average while 34 percent tweet three times or more. If companies have a lot of interesting content to offer, are live-tweeting an event or have an urgent job opening, they should feel free to tweet as much as necessary to engage their audience. Otherwise, they shouldn’t spam their audience.

Because different Twitter users log on at different times of the day, “reposting of jobs and news is important,” Heagy says. Otherwise, for example, a user logging on in the afternoon might miss a tweet sent out that morning, since only the most recent tweets show up in their feed.

However, recruiters and hiring managers don’t have to wholly rely on real-time tweeting. Using social media management software, companies can create engaging content and schedule it to be tweeted out at a later date.

According to Software Advice’s previously referenced study, marketers most often schedule social media posts several days to one week ahead of time.

Twitter can be an effective medium for recruiting—once companies and recruiters realize how to properly use it. Here’s what we’ve learned about how SMBs can better engage talent on Twitter:

By following these best practices, companies can turn their Twitter accounts from ancillary job boards into a crucial platform in engaging today’s talent.

In terms of gender, 53 percent of our survey respondents are male while 47 percent are female. 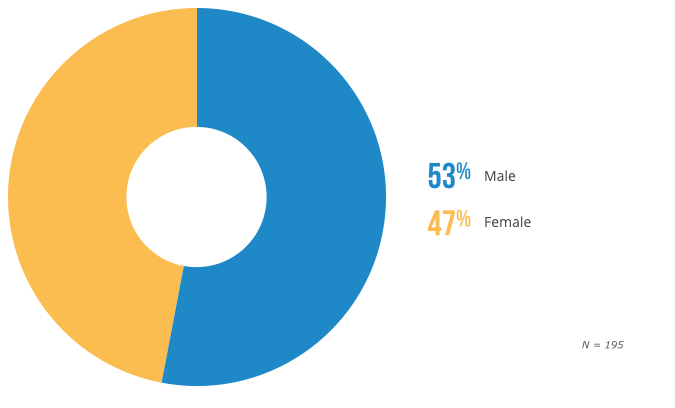 In terms of age, 45 percent of our respondents are between 26 and 35 years old. 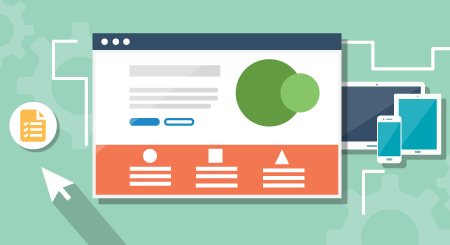 What the Best Careers Pages Teach About Designing Your Own