Software Advice recently found that as a company’s job board spend goes up, its average cost-per-hire tends to, as well. In our 2013 Recruiting Channels Survey, we also found that traditional job boards deliver the highest volume of candidates to recruiters’ inboxes. Given this wide use of job boards along with the high cost, recruiters need to be strategic about which job boards they decide to use.

And all job boards are not created equal. So, with the help of the and the National Human Resources Association (NHRA), Software Advice conducted a survey of 150 recruiters to help professionals better determine which are the best job boards for recruiting that they should focus their recruiting budget on to achieve maximum results. 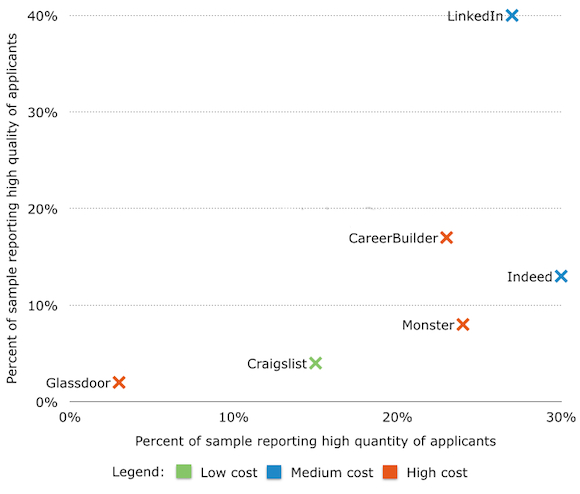 We asked recruiters to rate the quality level of the applicants they receive through each job board. According to our survey, the majority (40 percent) of recruiters note that LinkedIn delivers “high-quality” applicants.

The runners-up, CareerBuilder and Indeed, were described as delivering “high-quality” job candidates by only 17 and 13 percent of recruiters, respectively. On the other end of the spectrum, Monster, Craigslist and Glassdoor delivered the fewest “high-quality” candidates.

Another key consideration needed to determine a job board’s worth: How many applicants does it deliver? When we asked recruiters to rate each job board in terms of how many candidates they received from it, Indeed came in first place, with 30 percent of recruiters saying the site delivers a “high quantity” of applicants. In second place, with 27 percent, was LinkedIn.

In terms of quantity, Monster was a much closer runner-up than when delivering quality candidates. Twenty-four percent of respondents said that Monster delivered a “high quantity” of candidates, compared to just 8 percent giving the job board high ratings for “high-quality” candidates.

Craigslist Is the Least Expensive Job Board Option

Of course, one of the most crucial components when choosing which job boards to invest in is cost. We asked recruiters to rate each job board as “low cost,” “medium cost” or “high cost.” Craigslist was the least expensive of the job boards, with 42 percent of recruiters noting that the site was “low cost.” In second place was Indeed, with 29 percent.

Recruiters seemed torn on their rating of LinkedIn’s cost, with an almost equal percentage of recruiters rating the site as “low” (21 percent), “medium” (23 percent) and “high cost” (23 percent). This may be due to the different plans offered to recruiters by LinkedIn—monthly plans can vary from free all the way up to $899 per month.

Most Effective Board Varies by Job Level

In addition to asking recruiters to rank these job boards based on the quantity and quality of applicants delivered, as well as the overall price, we asked for their opinion on how effective each job board was for recruiting jobs of varying levels of responsibility.

As it turns out, according to the recruiters who took our survey, Indeed, CareerBuilder and Craigslist are most effective for recruiting candidates for entry-level positions.

Moving up in levels of responsibility, recruiters noted that LinkedIn and Indeed were the most effective job boards when seeking candidates for mid- and senior-level positions.

Meanwhile, recruiters noted that Craigslist was the least effective for recruiting candidates for positions at higher levels of responsibility. In fact, 33 percent of recruiters noted that this particular job board was “not effective” for recruiting senior-level positions, while 52 percent did not even use Craigslist to recruit for these types of positions.

Recruiters Planning to Invest More in LinkedIn and Indeed

Finally, we asked recruiters about their projected use of these job boards over the next year. Nineteen percent of respondents said they planned to invest more in LinkedIn, while 13 percent said they were planning to spend more of their recruiting budgets on Indeed.

According to the recruiters who took our survey, LinkedIn and Indeed are the most affordable and effective options for recruiting mid- to senior-level employees. Both of these job boards ranked well when it came to delivering a high quality and quantity of applicants at a mid-range price point.

When it comes to entry-level positions, Indeed, again, was most effective. However, CareerBuilder and Craigslist tied for second place. Of these two options, recruiters noted that Craigslist was considerably more affordable.

There are many job boards available, but not all will serve your company’s specific needs. Questions regarding the quantity and quality of candidates they deliver, their cost and what types of positions you’re recruiting for should help you determine which job board is best for your needs.

Methodology
To conduct this survey, Software Advice partnered with independent research firm, Research Now, as well as the Recruiting Process Outsourcing Association and The National Human Resources Association to collect 150 responses via email invite from human resources recruiters in the U.S. and Canada in early June 2014. Software Advice has no financial relationship with any of these organizations, and all responses were obtained in a fair and anonymous manner. 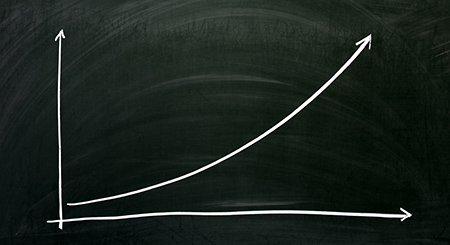 5 Questions To Answer Before Buying an Applicant Tracking System