How to Improve Employee Morale and Productivity Through Smart Climate Control

In nearly every modern office, “thermostat wars” rage: some like it hot, others like it cold, and companies find it nearly impossible to please everyone.

To learn more, Software Advice conducted a survey of office workers to understand employee preferences regarding office temperatures, as well as what temperature the thermostat should be set to and how smart climate control can provide an effective solution.

This report will help HVAC estimators, building managers and human resources managers understand these new technologies and how employees feel about them.

Whether it’s an insurance company in Iowa or an investment banking firm in Manhattan, almost every company’s office in the U.S. has grappled with a question of great importance: What temperature should the thermostat be set to to ensure that employees are comfortable and productive?

This issue is far more than just fodder for water-cooler debates. Research shows that an office’s temperature can have a significant impact on employee productivity. What’s more, the average office in the U.S. spends 29 percent of its operating costs—or about $30,000—on utilities such as gas and electricity for heating and cooling every year.

Compounding the problem is that few people can agree on what a comfortable temperature is. While it may be impossible to make everyone happy, there are new technologies available that give employees more control over the thermostat—while saving energy and expenses on heating and cooling. This report highlights the impact such technologies can have on employees.

Half of Employees Often Unhappy With Office Temperature

Frequency of Dissatisfaction With Office Temperature 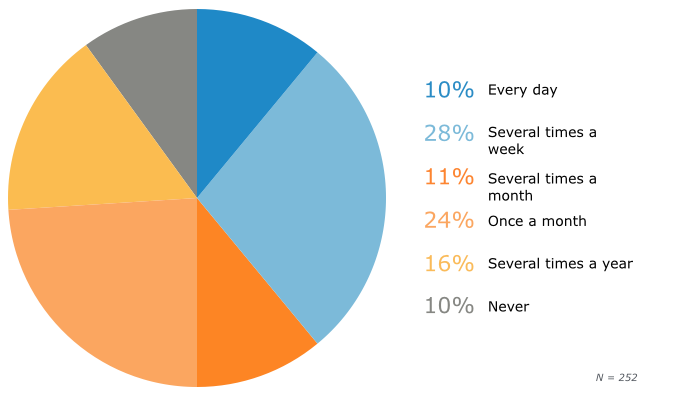 This dissatisfaction is heavily impacted by the time of year: A majority of respondents say their office temperature is “just right” during the more temperate seasons of fall and spring (54 and 51 percent, respectively).

Opinion of Office Temperature, by Season 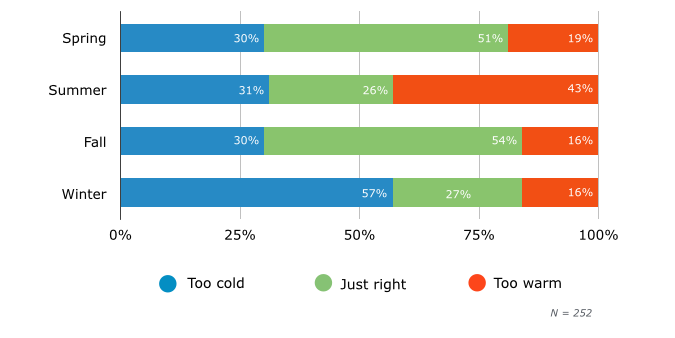 40% Percent Have No Control Over Office Temperature

The problem, it seems, is exacerbated by employees’ lack of control over their surrounding temperature. A full 40 percent of employees report having no control over the office temperature whatsoever, while just 24 percent are able to physically change the thermostat. 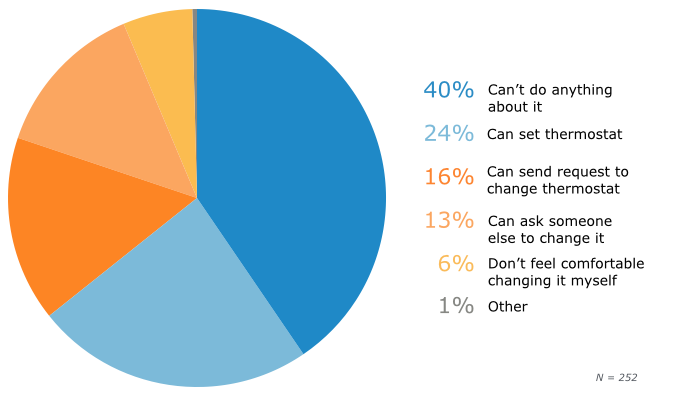 Of course, no office could work effectively if every employee had free reign over the thermostat. However, some newer climate control systems offer a potential solution by giving each employee a “vote” in where the thermostat should be set.

One such system, Comfy, integrates with an office’s heating, ventilation and air conditioning (HVAC) system. It allows employees to make requests from their smartphone or Web browser to have the office space warmed or cooled. The catch? While it gives employees a degree (pardon the pun) of control, Comfy limits blasts of warm or cool air to 10 minutes long.

The system also makes employee requests visible to everyone else in their heating and cooling “zone”—which subtly encourages compromise and communication between employees who might not see eye-to-eye. With this type of technology, employees get the instant gratification of having their voice heard. 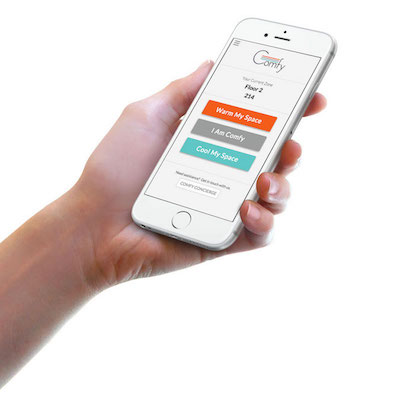 Over time, the software analyzes usage habits for each occupant and “learns” workday patterns (for example, when employees arrive and leave for the day). The system then begins to automatically tailor heating and cooling flows accordingly, while optimizing them to be as efficient as possible—resulting in less dramatic fluctuations in office temperature, which can help companies save money.

Google-backed startup Nest offers another type of “smart” thermostat. While it does not have the “voting” functionality Comfy offers, Nest, too, can intelligently detect usage patterns within an office and regulate temperatures automatically. While employees would still have to be given access to the thermostat with Nest, this is easily achievable through smartphone-app and Web-browser controls.

Though Nest is primarily used in residential spaces and smaller offices, there are several “smart” thermostat companies that target large commercial buildings. Network Thermostats, for example, offers Wi-Fi enabled thermostats that can also be controlled from smartphone apps and Web browsers.

With these more advanced climate-control systems, sensors can be placed throughout a building to provide more accurate temperature data. With this data at hand, employees could theoretically determine where the most comfortable spot in the office is for them. Management can also gain deeper insight into employee preferences and usage patterns.

While Comfy, Nest and Network Thermostats might be elegant solutions to the problem of “thermostat wars,” other workaround solutions exist, as well.

“Finding a comfortable temperature in a group office is a tricky endeavor pretty much everywhere,” says Duncan Murtagh, co-founder of Vetter, an online suggestion-box tool for small businesses.

“Since no two offices are the same (or, more importantly, no two sets of individual employees are the same), there is no ‘one size fits all’ solution. But those same employees that are causing the conflict can also be the source of the answer. All you have to do is ask them, ‘how would you solve this?'”

With Vetter, employees can submit ideas to management in a platform similar to a forum. Their ideas are put up for discussion and rated by other employees, and are subsequently reviewed. In the context of solving temperature issues, employees can collaborate and work toward finding a creative solution that satisfies everyone.

Next, we asked respondents how having more control over their office’s thermostat would impact both their productivity and morale. Not surprisingly, a clear majority say having such control would positively impact both. 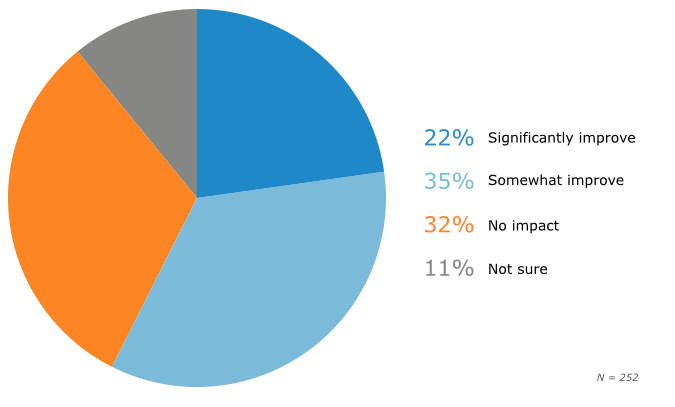 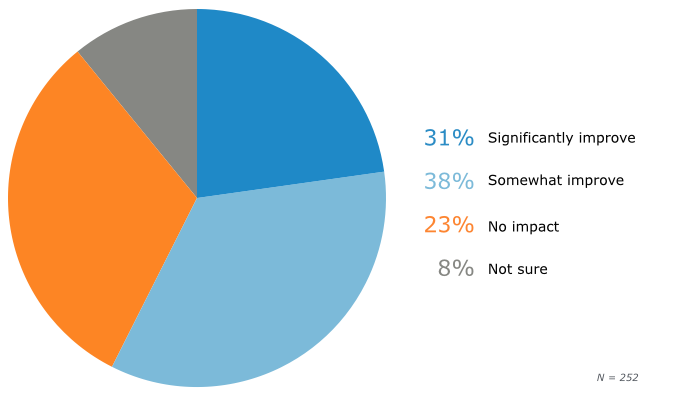 Indeed, a multitude of studies have observed a strong relationship between worker productivity and office temperature. One such study found that there was a 2 percent decrease in productivity for every degree above 77 degrees Fahrenheit.

But while employees saying having more control over temperature would boost their morale and productivity, it’s important to point out there will still need to be room for compromise between individuals—especially between male and female as well as younger and older workers.

One interesting note that might explain many office squabbles: Women like it hot; men like it Hoth. The median preferred temperature for men is 70F, compared to 72F for women. While that may not seem like an extreme difference, consider this: 23 percent of women in our sample prefer a temperature between 75 and 80F, compared to just 5 percent of men who prefer this range.

(It’s worth noting, however, that the U.S. Office of Safety and Health Administration recommends office temperatures not exceed 76 degrees.) 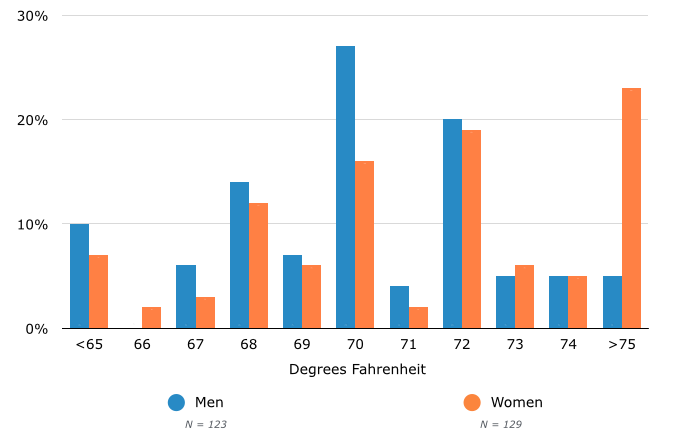 For some, squabbles exist due to the poor design of traditional thermostats, which can be clunky and don’t always give the user an accurate gauge on what the current temperature is throughout their zone. For example, one employee might be in a “hot spot” in the office that hovers around 75 degrees, despite the thermostat on the other side of the room reading 71 degrees. When that employee turns the thermostat down, they end up making everyone else frigid.

“Interfaces on apps can be made more intuitive than old-school, programmable thermostats, which have a limited number of buttons and LCD display elements,” says Jaq Andrews, a marketing and technology specialist at Zco Corporation, a mobile app developer.

“That clarity and understanding is probably the biggest reason to like ‘smarter’ thermostats. It’s much easier to set a temperature schedule on a calendar displayed in a browser window. An app could even show temperatures in different parts of a room, as long as there are sensors to give it the right data.”

With that in mind, an office could theoretically keep certain rooms at different temperatures and allow employees to move into the rooms that are most comfortable to them.

Another interesting data point is that, according to our data, the frequency of dissatisfaction with office temperature tends to increase with age.

Among 18- to 25-year-olds and 26- to 35-year-olds, only 32 and 34 percent, respectively, express frequent dissatisfaction (several times a week or more) with their office’s temperature. Compare that to dissatisfaction rates among the 46- to 55-year-old bracket, where 69 percent are frequently dissatisfied.

By Age: Frequency of Dissatisfaction With Office Temperature 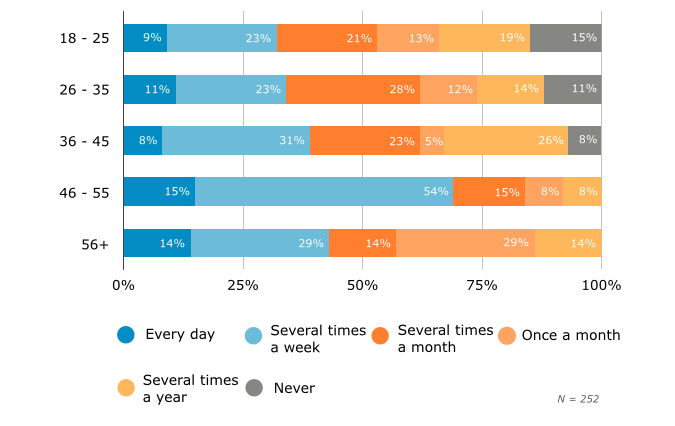 The same technological solutions suggested for bridging the gender divide could be used to resolve these differences between the ages: Provide different temperature “zones” throughout the office—perhaps in the form of a digital “heat” map—and allow employees to work where they are most comfortable.

Our data shows that employees can have distinct preferences when it comes to how warm or cold their office environment is. Here are some things companies should consider when determining how to end thermostat wars once and for all:

⇒ Evaluate new software and technology solutions. There is often a business case for revamping your office’s thermostat controls beyond making employees more comfortable: Wasted energy to heat or cool a building is wasted money.

⇒ Consider alternative solutions. Even with the “smartest” technology, disagreements can still occur, leaving some employees unhappy. Encourage your staff to speak up if they’re uncomfortable, and see if you can relocate them to a different part of the office.

Our sample is comprised of 129 women and 123 men who are office employees in the United States. As 71 percent of the sample consisted of employees between the ages of 18 and 35, it’s important to note that the data could potentially be skewed toward that age cohort’s preferences. Below is a breakdown of respondents’ age: 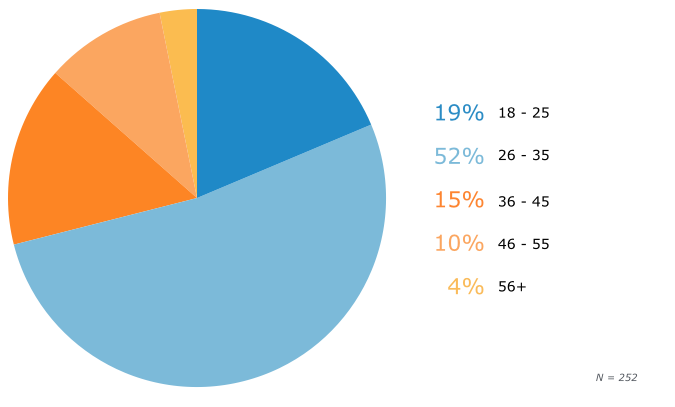