Note: This post was written in 2014. We’ve written more content with new research since then, including Improve Customer Experience in Retail Stores With New Technologies.

Attendees of this year’s Super Bowl had the opportunity to stroll down Broadway in midtown Manhattan before the big game and receive personalized, location-specific shopping alerts. These alerts are made possible by mobile-enabled foot traffic technology, which retailers around the country are increasingly using as a way to better understand customer behavior and boost sales.

This technology works by communicating with the unique mobile device IDs smartphones give off when they recognize a store’s WiFi or Bluetooth network. By tracking the movement of a customer’s phone, this technology can gather data on how its owner moves around a particular location.

Retailers use this technology to determine peak traffic behaviors, conversion rates and dwell times in the stores. This data can be used to plan and re-configure store layouts and merchandise displays in order to better attract shoppers, and studies have shown that using this data strategically can boost sales and customer loyalty.

Some solutions work off stores’ existing WiFi networks, while others require their own specific gear (such as WiFi or Bluetooth controllers) to be placed in or near the store. Others are becoming increasingly sophisticated—Hugo Boss, for example, is using heat sensors to help figure out how to arrange products in its high-end clothing stores.

So, what benefits can your business realize from this technology? Here are four ways retailers can use the data these solutions collect to boost sales.

Identify the Cause of Best and Worst-Performing Stores

One of the biggest benefits this technology offers is the ability to figure out the root cause behind sales variations across different stores. In other words, is your best-performing store generating more sales simply because it’s in a location that receives higher traffic, or because of the way it displays merchandise?

Comparing the differences in sales volume is one way to better understand this. One youth-oriented clothing retailer, for example, used this technology to analyze average shop times across their stores. It found that, in the highest-performing stores, customers shopped for an average of 34 minutes and spent $60, while customers in the lowest-performing stores shopped for only 22 minutes and spent just $40 (see graph below).

After analyzing the data further, the retailer tested a variety of incentives to keep shoppers engaged in lower-performing stores. As a result, the company boosted average shop times in lagging stores by five to seven minutes, which resulted in an additional $25 million in annual sales.

Use Results to Bolster Other In-Store Efforts

This technology can also be used in conjunction with other forms of in-store advertising. Take the State of Vermont Welcome Centers, a collection of 16 storefronts located on major highways near well-known Vermont tourist destinations that receive over 4 million annual visitors.

“The centers are like museums of local Vermont handicrafts,” says Al Levy, who was CEO of Route802, a Vermont-based digital media company that shuttered its offices in September of 2015. “They’re designed to promote Vermont businesses and locally-grown products, such as coffee.”

To better understand visitor flow and increase the sale of these local products, the centers began working with Route802. A WiFi network was installed and integrated with Swarm, a mobile foot traffic analytics software program Route802 partnered with. This network was connected to digital TV advertising displays, which show visitors ads designed to keep them engaged so they spend more time in the centers.

Swarm data was collected from smartphone users and used to produce reports on dwell times and visitor traffic patterns. “We found dwell times range from six to 15 minutes, depending on circumstances,” Levy says.

“We adjust our digital signage according to the dwell times of the population in the centers, and can be more intelligent about what shows up on the monitors. The key is having the right mix of sales, good content and a viable store footprint to make it work.”

The digital signs now deliver a variety of content that includes travel advisory messages, local event information and Amber Alerts that can be updated instantly. The signs also host HD video and static advertising for nearby Vermont businesses.

Additionally, Route802 applied the knowledge gained from this experience to tracking data collected from new WiFi networks installed in other shopping districts, such as downtown Burlington.

Segment Your Store Into Discrete Zones for Better Analysis

Some mobile-enabled foot traffic solutions can track the movements of customers down to a few feet. This is especially helpful if you’re trying to figure out where to place particular displays or whether it makes sense to offer certain merchandise in a particular location.

One big box retailer, for example, found that 60 percent of all customer traffic was occurring in just 30 percent of the store. It adjusted where it placed promotional signage and its most profitable brands in order to drive traffic to the other 70 percent. 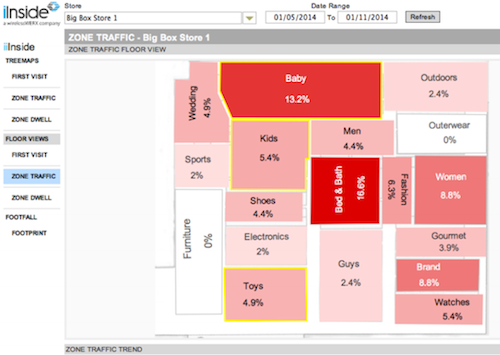 Another grocery chain found that the back corner of one store was getting less than a few tenths of one percent of total store traffic. The company used this data to perform a complete store redesign last fall intended to drive customers to this back area. As a result, traffic in this location increased to more than 2 percent of total store traffic, and traffic spread more evenly throughout the entire store. 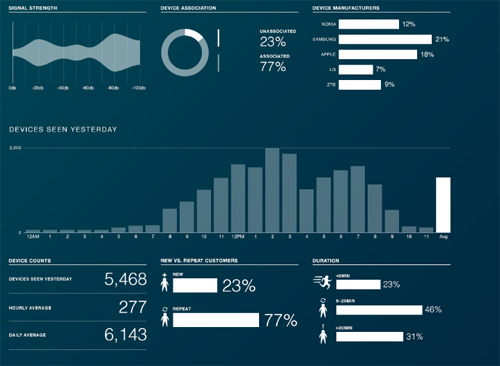 Some vendors that offer mobile-enabled foot traffic technology feature A/B testing as part of their dashboards. This means that you can test two variations, such as displaying the same item in two different store aisles and measuring which location sells more.

Jason Buck, vice president of marketing for The Cellular Connection, is conducting a series of A/B tests to refine the company’s store layouts of high-margin accessories, such as chargers and headsets. These tests found that these items sold in much greater numbers when they moved them from the back of the store to the front.

Another retailer in New York City is using A/B testing to figure out how to motivate shoppers to climb to its upper floors, which mobile-enabled foot traffic revealed were seeing far less customers. The retailer is currently testing and measuring incentives to attract customers upstairs, such as handing out free coffee and special discount coupons near the escalators. What Impact Will the Amazon Go Store Have on SMB Retailers? 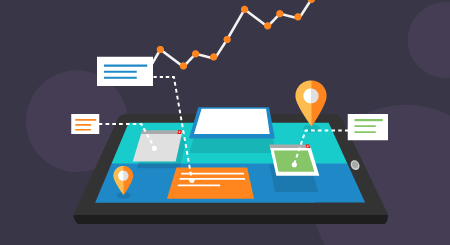