How Do Job Seekers Feel About Recruiting Via Text? [Survey]

If you’re a recruiter looking to quickly communicate with job seekers, texting appears to be a great option to do so. According to Pew Research Center, 97 percent of smartphone owners send at least one text message a week.

But how do job seekers really feel about being recruited via text—a medium more associated with silly emojis than serious business relationships?

To find out, Software Advice surveyed 282 random job seekers from around the U.S about their preferences for communicating with recruiters. Our results, presented below, will help recruiters learn how to best use texting to work with candidates.

Recruiting via text is on the rise. Early adopters are investing in specialized mobile recruiting software to mass-text candidates using an automated system. Some recruiters are even using texting for early-stage interviews.

When you look at some of the numbers, it’s easy to understand why. Ninety percent of text messages are read within the first three minutes of being sent, meaning recruiters are able to get answers and communicate needs with candidates faster.

Erik Kostelnik, CEO of recruiter texting platform TextRecruit, adds that recruiter texts sent through its software have a 26 percent response rate (compared to a click-through rate of just four percent for emails).

But are we getting ahead of ourselves? Texting is a fairly recent addition to most recruiters’ arsenals, meaning many aren’t aware of best practices. In addition, not all candidates may like being contacted through a more personal and informal medium.

Jim Durbin, headhunter for recruiting agency Brandstorming, notes that “texting, like most forms of communication, requires marketing, experience and knowledge” to be done successfully.

Job Seekers Are Divided on the Professionalism of Recruiter Texting

We first asked job seekers to describe their impression of a recruiter who sent them text messages, assuming they had opted in to being contacted that way.

Impression of Recruiters Who Text 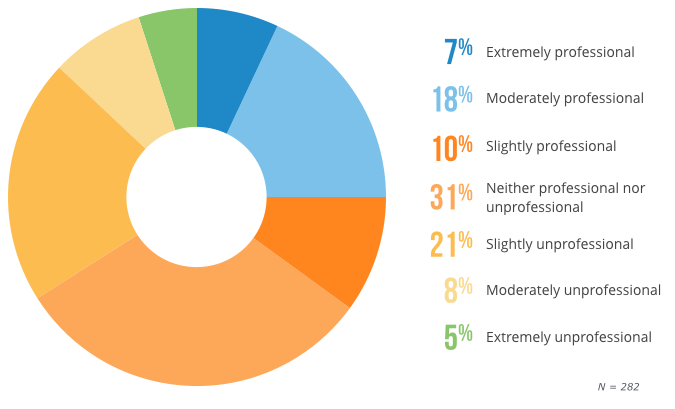 Even when the results are broken down by respondent age, the results remain the same. Millennials aged 18 to 34 (aka “the Texting Generation“) are just as likely to consider recruiter texting unprofessional as those aged 35 and older.

Impression of Recruiters Who Text, by Respondent Age

As Durbin notes, while most older candidates probably don’t want to be texted, this doesn’t necessarily apply to all of them. Because each candidate is unique, it’s important to find out their preferences beforehand in order to communicate with them using the most effective medium possible.

“Don’t make big assumptions about who you’re sending texts to, because every person is different,” Durbin says. “Someone may be a privacy freak, but someone else may not care.”

Other research confirms that people have differing views on receiving text messages from those outside of friends and family. When Autosend, a web application company, asked respondents if they would like to receive texts from a business, the answers were similarly split: 35 percent said “maybe,” 33 percent said “no” and 30 percent said “yes.”

Job Seekers Prefer Contact by Phone or Email Over Text

For the next question in our survey, we presented respondents with six common scenarios in which a recruiter might contact them, assuming they opted-in to the recruiter’s services:

For each scenario, we asked respondents to pick the medium they would most prefer to be contacted through, allowing them to choose between a phone call, an email, a text message or social media.

As the results below show, job seekers do not prefer a text message in any scenario: Email is the most popular option in four scenarios, while a phone call is preferred in two. The scenario in which respondents most prefer to receive a text message—to confirm a job interview time—still only accounts for 16 percent. Even when we break down the data by age or industry, there is no situation where texting is most preferred.

For those who have never been texted by a recruiter before, the idea may seem strange—especially given the professional nature of the conversations that take place around the application and hiring process.

According to Kostelnik, because texting for business purposes is relatively new, “Candidates are choosing what they already know and what is popular [as their preferred medium].” But Durbin also says that if a candidate doesn’t prefer a text message from a recruiter, it may be because they had a bad experience in the past.

In Durbin’s words, many recruiters are “really, really bad” at texting. “I think that’s half the problem: Candidates don’t respond as well, because all recruiters want is an answer. They bug candidates until they get a response, and then never talk to them again. I would not be surprised to find that the response to [texting] is entirely based on bad experiences with recruiters.”

As mentioned earlier, recruiters should find out in advance if candidates would like to be texted instead of called or emailed. Additionally, since texting is ideal only for informative, one-way messages, recruiters would be wise to only text in certain situations where they don’t expect a conversation or long response from the candidate; e.g., confirming an interview time.

More importantly, if a candidate can’t be reached through their preferred medium, recruiters should not bombard them with the same message through other ones.

Finally, platforms that allow recruiters to see a candidate’s contact history are also ideal, to “ensure that [recruiters] are staying compliant if a candidate no longer wishes to be contacted,” according to Kostelnik.

Texting During Non-Business Hours Is a Bad Idea

To find out when texting should be absolutely avoided, we next asked respondents if there are any situations where a text from a recruiter would be inappropriate (again assuming they had opted-in to being contacted by that recruiter).

Fourteen percent say texting during non-business hours is the biggest offense. Texts unrelated to job hunting (12 percent) and texting to tell a candidate whether they got a job or not (10 percent) are also mentioned. 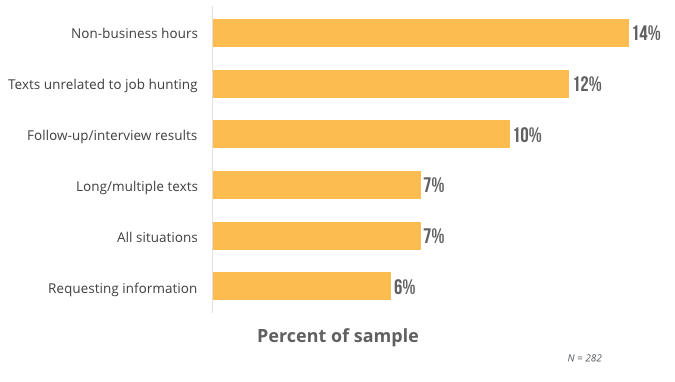 Respondents’ answers show again that personal preferences differ. While many say anything outside of the 9 a.m. to 5 p.m. timeframe is inappropriate, one respondent says that texting during office hours should be avoided, because “there’s a chance other co-workers [could] see the message.”

Durbin agrees that there are dangers with recruiters texting during work hours.

“If their phone is buzzing, someone’s going to ask,” Durbin says. “The sender also pops up. So if it’s sitting on the desk, and it pops up, and it says, ‘Tech Recruiter wants to schedule an interview,’ you may have just gotten that person fired.”

“Recruiters want to celebrate if something went well,” Durbin says. “But if it’s good news, the company will call and hire the candidate. The manager will talk to the candidate.”

The Best Time to Text Is Mid- to Late Morning

When asked what time they prefer to be contacted via text message, the greatest percentage of respondents cite 8 a.m. to 12 p.m. (29 percent each) as their window of choice. 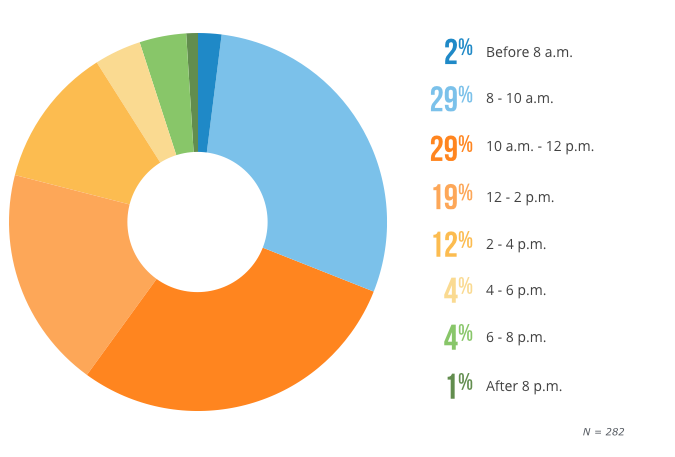 Although job seekers prefer morning to afternoon texts, Durbin says it can be hard to figure out when in the morning to text a candidate because of differing schedules. This again points to the importance of learning a candidate’s preferences ahead of time, in order to avoid missed communication or annoying the job seeker.

After Two Texts, Call or Email Instead

One major problem with recruiter texting is that recruiters may have a tendency to abuse the privilege.

As in dating, Durbin says, “The person who texts the least wins. Recruiters in general don’t pay enough attention to do this correctly. If they send 10 texts, and a candidate only sees the last one, they may not know that the recruiter sent nine other ones for days.”

So we asked our job seekers this question: After how many simultaneous texts would you prefer that a recruiter call or email you instead?

Forty percent of respondents say that after two text messages in a row, recruiters should use another medium to contact them. Kostelnik says that one of the benefits of texting for candidates is that the information is “easy to read and respond to.” This benefit can be lost if recruiters try to get too specific or convey too much information in multiple messages.

Multiple simultaneous messages can also be seen as inappropriate on the part of the recruiter, as seven percent of respondents note in the above question about inappropriate texting situations. Kostelnik notes that TextRecruit has found that candidate response rates increase when messages are kept to a 160-character limit.

Texting has many benefits for both recruiters and job seekers, and specialized software is making the medium more robust through the use of tracking capabilities and customizable templates. But the practice is still in its infancy, and recruiters can easily abuse texting—which can come off as unprofessional and scare potential candidates away.

In addition to the advice above, Kostelnik says there are other texting best practices that recruiters should implement.

“Your message should be friendly and non-salesy,” Kostelnik says. “Play to the candidate’s ego, telling them [that], based on their qualifications and experience, this would be a great opportunity for them.”

Kostelnik also says that many times, recruiters will lose a candidate’s interest because they don’t get to the point in a text message. Texts should stay simple, and any questions should be able to be answered with a simple “yes” or “no.”

Software can also help recruiters optimize their texting practices. Different templates can be created depending on the situation, and tracking analytics can let recruiters know which messages improve certain metrics, such as open and response rates, and which ones don’t.

But if one trend ties all of our results together, it’s that every person is different, and it is up to the recruiter to be proactive and learn a candidate’s preferences beforehand to avoid a bad experience. Combined with email and phone calls, texting can be a valuable communication tool for recruiters. And when done correctly, texting can lead to successful candidate interaction and placement. 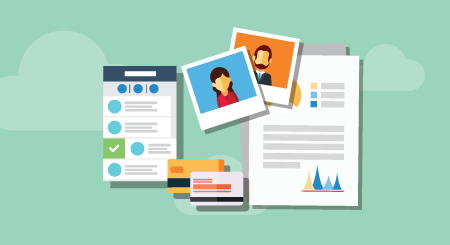 How HR Software Can Fix 3 Examples of #RecruiterFails