There are countless options out there for video conferencing, but one app towers above the rest in popularity: Microsoft Skype.

Now, Microsoft is making an aggressive push to corner the market not just for video conferencing, but also for business phone systems. Skype for Business sports advanced functionality for the workplace such as routing of voice calls and web conferencing.

We interviewed Microsoft partners and other players in the unified communications industry about the scope of Microsoft’s offering to help you decide whether or not to integrate Skype for Business with your business’s communications platform.

We also surveyed owners and managers at small businesses about how they’re currently using Skype, so you can evaluate different approaches.

(Click on a link below to jump directly to that section.)

Skype for Business Vs. Lync and Consumer Skype

Most consumers are familiar with Skype as a video calling app.

Skype for Business, however, isn’t just a video calling solution, but a rebranding of Microsoft’s Lync client, which has been primarily used for instant messaging and presence, despite also offering video calling and conferencing features comparable to Skype.

Lync was already many businesses’ go-to solution for IM and ad hoc voice/video conferencing, thanks to its strong integration with Microsoft’s Office 365 productivity software. In many deployments, Lync serves as the end user client for a unified communications (UC) system.

However, Microsoft only provided the UC client (Lync) in these deployments, rather than the UC system itself, which had to be purchased from third-party vendors.

Microsoft still supports Lync, and many organizations are still using it, as the results of our survey of small business owners and managers about Skype for Business adoption show:

Adoption of Skype for Business vs. Lync and Consumer Skype 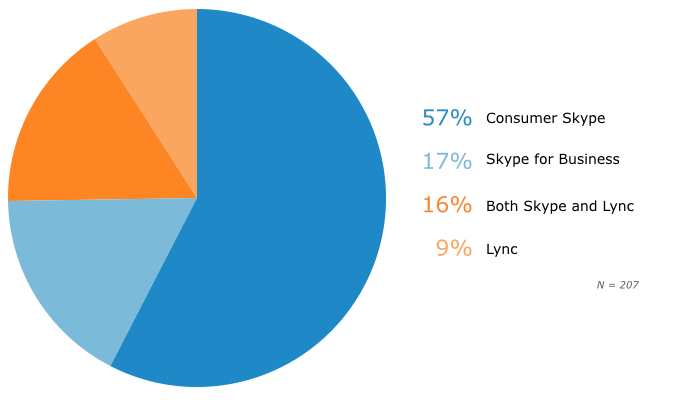 Skype for Business at small businesses is still lagging behind adoption of the free, consumer version of Skype, but the landscape will undoubtedly change as Microsoft beefs up its telephony offerings.

For instance, Skype for Business is now included in Office 365 subscriptions, which makes it a compelling value proposition for businesses that have already invested in Office 365.

Additionally, Microsoft is entering the cloud phone system market by including its own business phone system, known as Skype for Business Cloud PBX, in some Office 365 plans.

What Are the Major Features Offered With Skype for Business?

That said, there are still significant limitations to Microsoft’s offerings. Let’s take a look at what Skype for Business does well before we examine what it doesn’t do.

Skype for Business, of course, offers many more features than we list here. We’re focusing on key capabilities for business users:

Key Features of Skype for Business 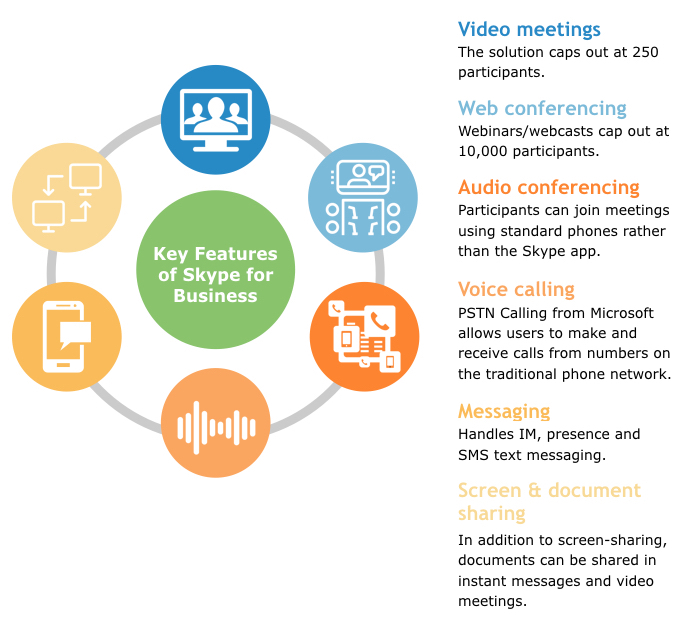 Some of these features, such as basic video calling, are indeed also available in consumer Skype. Others, such as the ability to connect calls to the public switched telephone network (PSTN) in addition to other Skype users, require special Office 365 subscriptions, as we’ll explain in detail below.

With the arrival of Skype for Business Cloud PBX, you now have three basic options for utilizing Skype in the workplace:

It may seem like a natural choice to go with both a video conferencing solution and a phone system from Microsoft, and indeed, the combined solution offers a number of benefits. However, the benefits won’t be the same for all businesses:

Martin Bitzinger, general manager of enterprise at Mitel (a leading UC vendor), explains that there are cost savings possible via bundled licensing for Skype for Business in Office 365 subscriptions. However, he cautions that some organizations may actually see price increases with this strategy.

Ed Wright, senior director of product management at ShoreTel (another leading vendor of on-premise and cloud-based UC solutions), points out that Microsoft’s tiered licensing plans for Office 365 are the major culprit.

To get all the phone system features, you need to pay for the most expensive subscription tier, Wright explains. “You have to go with the E5 subscription along with a separate PSTN subscription, since E5 only gets you all of your internal calling. By the time you build all of that together, it was north of $50 per month per user the last time I looked at it, which is on the high side for UC subscriptions.”

Without the PSTN Calling from Microsoft subscription Wright mentions, which must be added on top of the Office 365 subscription, you can only make calls to and receive calls from other Skype users.

Wright comments that “Microsoft has proven that, in general, they integrate very well across their own stack.”

However, the important point to remember is that Skype for Business is not necessary for Office 365 integrations, as these have been handled out-of-the-box by third-party UC vendors such as ShoreTel and Mitel for more than a decade.

As Wright continues, “we have a longstanding commitment to integrate at a lot of different touch points across the Microsoft productivity stack. The flagship piece of that has been all the different things we do within Microsoft Outlook: calendar integration, collaboration bridge integration, presence integration, unified messaging etc.”

Other leading UC vendors offer a similar range of integration capabilities for Office 365.

Skype for Business doesn’t yet cover all of the bases that business phone systems have traditionally covered in terms of features. However, Microsoft has been aggressively expanding the scope of its offering.

Additionally, Microsoft’s technology partners, such as Polycom (a major manufacturer of IP handsets and conferencing hardware), have been stepping in to supplement some of the telephony features still lacking in the Skype for Business client via dedicated Skype for Business hardware, rather than software.

In partnership with Microsoft, Polycom is designing desk phones, conference phones and room-based conferencing systems for Skype for Business-only deployments. Polycom’s desk phones and other hardware solutions allow users to perform features that aren’t available in the client itself.

We spoke with Adam Jacobs, principal Microsoft architect at Polycom, to review some of these features.

Jacobs cautions that unless you purchase IP phones certified for Skype for Business, you won’t just be unable to use these features—you may not even be able to get the phones to register with Microsoft’s Cloud PBX offering in the first place. 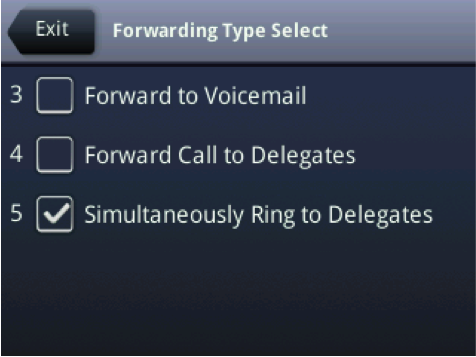 Laura Marx, Polycom’s senior director of alliances marketing, explains: “You access RealConnect through the Skype for Business workflow, invite any standards-based video or audio endpoint from Polycom or Cisco, and these endpoints can then click to join the same meeting. All of the participants meet in the same video call and can share content etc.”

In other words, you won’t need to rip out all your old room-based conferencing equipment from Cisco or Polycom to leverage Skype for Business’s video capabilities.

We can thus see that Microsoft’s telephony options already cover the needs of many standard business telephony scenarios, including advanced room-based video conferencing, and these features will only expand over the next few years.

With that being said, Microsoft’s offering is currently tailored to the needs of office workers, and won’t yet work for organizations with complex telephony needs that extend beyond the office walls.

As Mitel’s Bitzinger observes, Skype for Business’s strong collaboration features are ideal for “PC-bound knowledge workers,” but the solution doesn’t work as well in organizations where such workers “are only a small fraction of the worker population, which largely consists of service workers.”

So what can you do if Microsoft’s phone system offerings aren’t cutting the mustard, but you’re still trying to standardize on Microsoft applications?

The answer is to invest in a third-party UC system that integrates with the Skype client. In this deployment strategy, the UC system powers features that are lacking in the Skype for Business client itself, instead of powering these features via Microsoft’s own Cloud PBX offering. 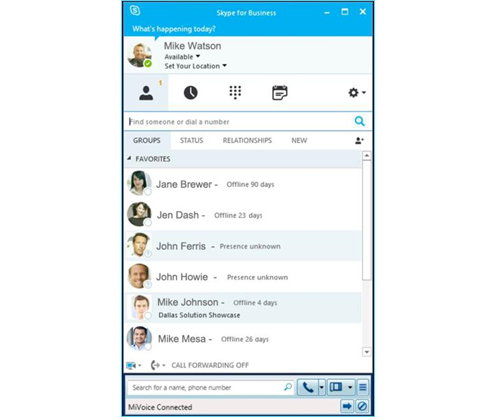 As we’ve seen already, some of these features can also be enabled through desk phones, conferencing hardware etc., rather than the UC system (Polycom’s hardware be used in either third-party UC system deployments or Microsoft-only deployments.) 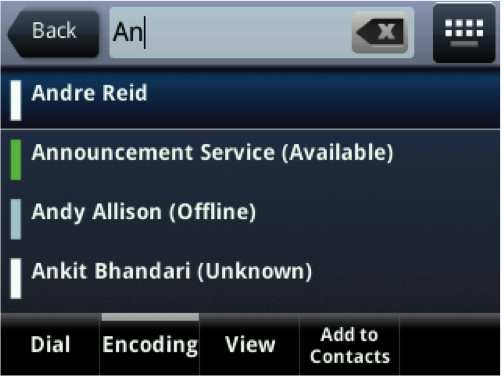 In order to find out how many small businesses are currently integrating Skype for Business with their phone systems/UC systems, we asked whether respondents’ desk phone numbers are the same as their Skype numbers, since this indicates an integration.

(We did include an option for call forwarding, since consumer Skype can forward calls to a desk phone number.)

Integration of Skype with PBX System at Small Businesses 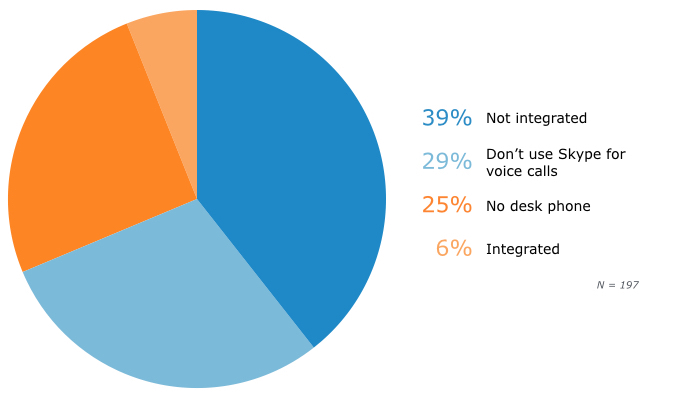 Because our survey went to all small business users of Skype, including users of the free version, the six percent with integrated phone systems is actually fairly significant. We can assume that this number would be much higher if the survey only went to Skype for Business users.
Takeaway: Integrating Skype with a third-party phone system gives you all the benefits of a highly streamlined and robust collaboration client (Skype), while allowing you to supplement Skype’s functional limitations via offerings from the third-party vendor.

What Are the Benefits Skype Offers for Business Communications?

We’ve seen that most UC vendors offer communications clients for mobile devices and laptops that include many or all of the features of Skype for Business, in addition to a range of features that are still missing in Microsoft’s offering.

So, why use Skype?

We polled small businesses that use Skype for business communications to find out: 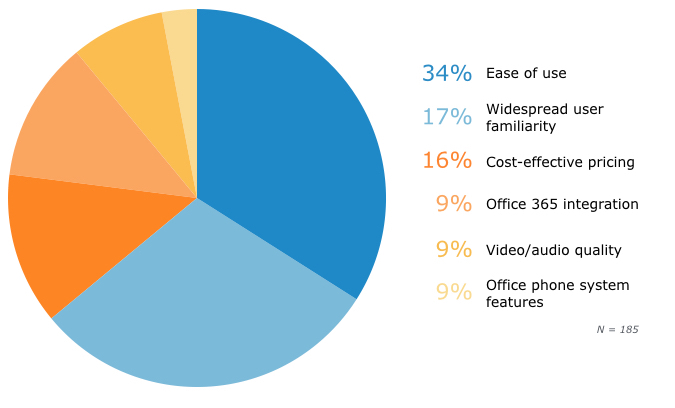 The two top benefits—ease of use and widespread user familiarity—aren’t related to Skype’s functionality, but rather to the streamlined user experience the solution offers, as well as its popularity.

These benefits can thus be obtained either by a Microsoft-only strategy or by integrating Skype for Business with a third-party system.

That said, we’ve noted that Skype lacks some advanced UC features. Here are some next steps if Skype doesn’t look to be ideal for your business: