EMV Deadline: Will SMB Retailers Be Ready in Time?

Though its October 2015 deadline looms near, many smaller U.S. retailers still aren’t compliant with the new EMV payment standard. In fact, in our December 2014 report on the EMV preparedness levels of small and midsize businesses (SMBs), we were surprised to find that one-quarter of retailers were unaware of the standard. This may prove to be a costly mistake, as non-compliant retailers can soon be held liable for fraudulent transactions.

Our recent report on must-have retail point-of-sale (POS) features brought a similarly surprising discovery: 64 percent of single-store retailers don’t have a POS system in place. Combining these data points, this report will highlight why the impending EMV deadline offers a great chance for retailers to finally upgrade to a POS system—while also making the transition to chip card readers.

In this report, you’ll learn that:

Only 22% of SMB Retailers Ready for EMV Deadline

The primary cause for concern with the EMV standard is the shift in liability for fraudulent charges. This liability can cause severe financial damage to retailers—especially smaller, independent retailers.

According to Randy Vanderhoof, executive director of the Smart Card Alliance (a nonprofit association helping accelerate the adoption of smart-card technology): “After October 2015, the entity that is the least secure in [its] technology will be the one liable for the fraud, if it turns out that that transaction was a counterfeit card.”

Luckily, the number of retailers that are already EMV-compliant is trending in a positive direction. In fact, it has doubled: from 11 percent in 2014 to 22 percent today. 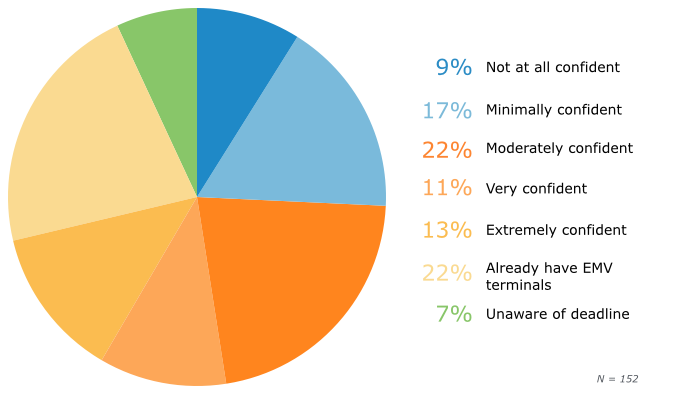 But though the data is trending positive, the hard fact remains: Regardless of confidence levels, 78 percent of retailers still aren’t EMV-compliant.

Vanderhoof offers some reasoning into why so many retailers are unprepared.

“I think there has been a sense that [merchants] were just going to ignore this. They didn’t believe it was going to happen, or they just put it out of their mind because they had more important things to worry about.”

This same sentiment may also be the reason why so many retailers have yet to adopt a POS system. Factors such as cost and implementation time can make it easy for retailers to put off purchasing software—but the operational benefits of a POS system, including time saved on both the front and the back end, greatly outweigh the costs.

Despite these benefits, retailers clearly have a long way to go in terms of EMV compliance and POS adoption.

Given the severity of not complying with EMV, one would think there’d be some urgency among retailers to adopt EMV capabilities. However, since that doesn’t seem to be the case, we asked retailers who don’t have EMV readers in place why they’ve yet to transition. 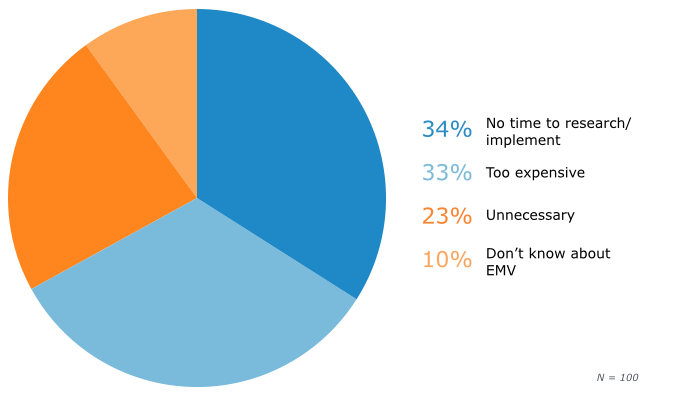 The most surprising finding here is that nearly one-quarter of retailers find EMV compliance unnecessary. The potential negative ramifications of not having EMV capabilities are staggering—so the fact that so many SMB retailers find EMV readers less than vital is mind-boggling.

However, Vanderhoof is confident that merchant adoption rates will increase as the negative consequences of not being EMV-compatible are seen.

“Anybody [who is] saying ‘I have no intention of ever upgrading to EMV’ might change their tune a month later, once they get socked with a large chargeback that they’ve never seen before.”

This also holds true for those retailers that consider POS systems unnecessary. They may make due for a while, but cracks will likely form as their businesses grow.

Indeed, we speak to many retailers every day whose current methods for managing operations are failing them. They need automation and more streamlined processes to help them manage their store—and are often relieved to learn what POS systems can take off their to-do list.

According to a 2014 report from the Aite Group, 70 percent of all U.S. credit cards and 41 percent of debit cards will be EMV chip cards by the end of 2015. To check this progress, we surveyed consumers to determine how many have—and are using—EMV cards. 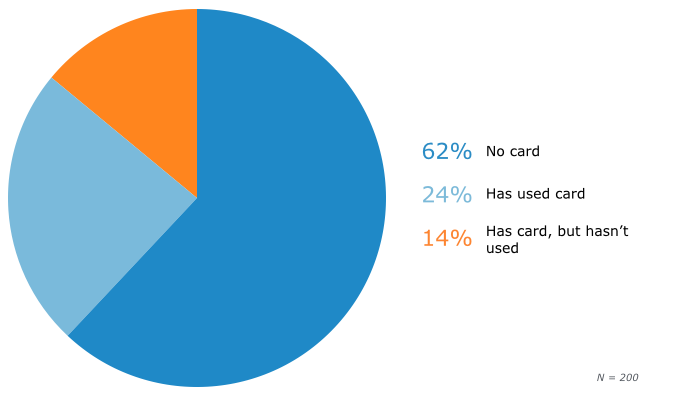 Shockingly, 62 percent of U.S. consumers still haven’t been issued an EMV card. It seems card issuers still have some work to do to get chip cards out to their customers.

Vanderhoof says not all card issuers will meet the deadline, but they’re on the right track.

“The manufacturers who are supplying the cards to the U.S. financial institutions are all saying that at, or very close to, 50 percent of the total cards in the market will have EMV by the end of the year; about 600 million out of the 1.2 billion will be in market.”

It’s important for retailers to realize that even though most consumers don’t currently have chip cards, they will by the end of the year. This means retailers need to be ready to accept these cards as soon as possible.

Retail operators are undoubtedly a busy bunch, which is perhaps articulated by the low percentage of retailers fully understanding the liability shift. It would serve retailers well to dedicate some time to sit down and really absorb what the EMV standard means for them and their business.

Furthermore, for the majority of retailers using manual methods to run their business, this migration to EMV technologies offers a great time to finally upgrade to a POS system. 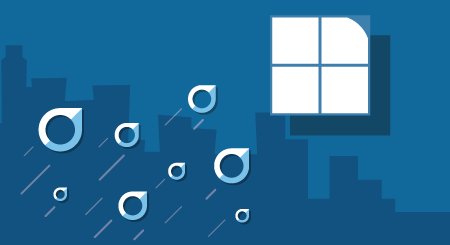 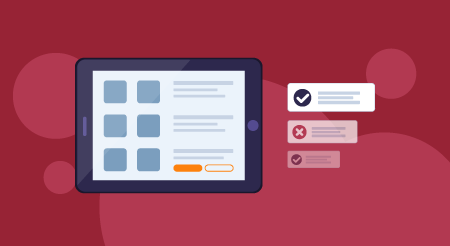