Every year, Software Advice speaks with thousands of prospective buyers looking for the right transportation management software (TMS) for their companies. Most are from small businesses (those with annual revenue of $100 million or less), which means these conversations give us unparalleled insight into these buyers’ reasons for purchasing new software.

We recently analyzed a random selection of 385 of these interactions to uncover small business TMS buyers’ most common pain points and their reasons for purchasing new software. This report outlines the trends we uncovered.

When asked which features they were looking for in a TMS system, 77 percent of prospective buyers said they needed to either plan and track the routes for product shipments or track actual shipments themselves. (This number was a combination of 52 percent who stipulated a route optimization solution and 25 percent who wanted shipment tracking.) 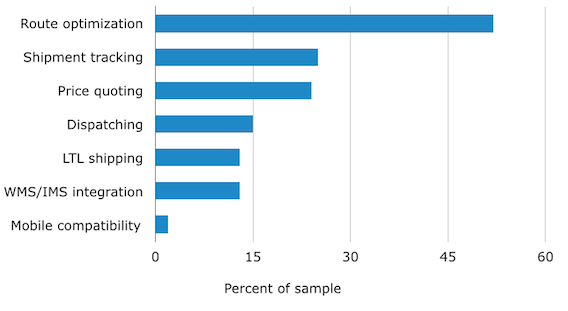 Route tracking and optimization allows users to monitor the location of inbound and outbound transports and tweak their routes based on distance, weather and a number of other factors. Shipment tracking, meanwhile, enables users to follow items that are shipped and provide accurate estimated times for arrival (ETAs) for those shipments. Both are basic features commonly included in many TMS systems, though the functionality of these features varies from basic to advanced.

Leah Fenech is the vice president of sales for Intelligent Logistics LLC, an Austin-based logisitics consulting firm, and also heads the Austin chapter of APICS. She says that beyond basic route optimization and shipment tracking, many TMS users are looking for the ability to compare pricing among different carriers.

"Among the customers we deal with, they use a TMS for tracking and tracing, but more importantly, they use it to initiate the shipment from the very beginning," she says. This often begins with selecting the right carrier for the right load.

Indeed, 24 percent of the prospective buyers we spoke to requested tools that would assist with price quoting and cost comparison, and 15 percent said they wanted TMS software that would assist with dispatch capabilities. Thirteen percent wanted a system that could focus specifically on less than truckload (LTL) shipping, which refers to relatively small freight, while another 13 percent said they needed TMS capabilities as part of a wider WMS or inventory management software (IMS).

Interestingly, less than 2 percent of buyers expressed interest in a system that was compatible with a tablet or other mobile device. Given that our buyer sample was small businesses, it may be that these organizations are less concerned with an add-ons like mobile compatibility; something that's often seen as a “nice to have,” rather than essential, feature.

Although a breakdown of prospective buyers’ current methods revealed a variety of different techniques, the single largest group (24 percent) fell under “manual methods," which often meant that buyers were still using pen and paper to manage their transportation operations.

Fenech says this number is not surprising, and that she sees this trend among the majority of her customers.

"If they’re in a very high-turn commodity area, such as consumer goods, where things go through a mass distribution process, that's much different from a company that manufactures a product that's customized by their customer, or where they have products that are time or damage-sensitive," Fenech says.

It's in these more specific markets, she continues, that she sees manual methods frequently in use, as the individual needs of each order are not often manageable with a TMS system.

"[Customers using manual methods] need to make arrangements, shipment by shipment, based on the requrements of that shipment and not based on a mass distribution price-based process," Fenech explains.

This could also explain why 20 percent of buyers we spoke said they were currently using spreadsheet software, such as Microsoft Excel, to manage their transportation operations. Another 17 percent, meanwhile, said they were using a TMS program that was either outdated or lacked the functionality they needed. 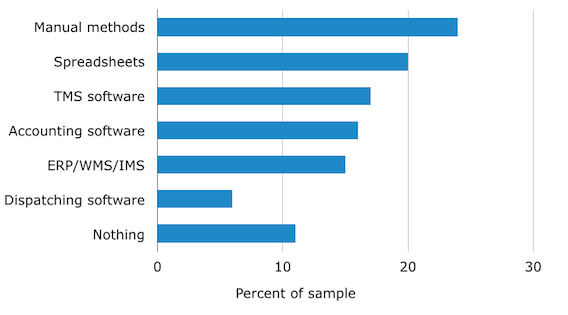 Most Want to Implement New Software Within Three Months

In addition to asking buyers about their current methods, we also asked when they planned to implement a new system. We found that most buyers in our sample want to purchase new software in the near future: 68 percent expressed a desire to implement a new TMS system within the next three months or less. 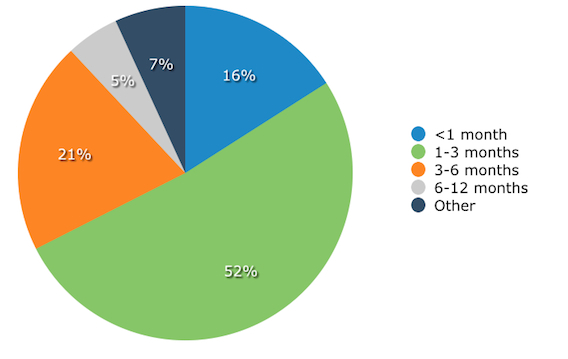 When asked why they were evaluating a new TMS system, 37 percent of buyers—the largest single group—said they wanted more functionality than was offered by the current methods they were using. 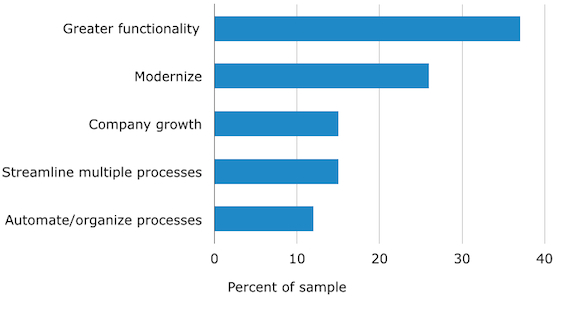 Another 26 percent of buyers said the software they currently had in place was outdated, while 15 percent said their business was outgrowing the manual methods they currently relied on. Meanwhile, 12 percent were either from new businesses or new departments in existing businesses, and said they were evaluating TMS solutions so they could be “organized and efficient from the beginning.”

An additional 15 percent said they wanted a TMS solution in order to streamline multiple processes within their business.

Most Buyers Want a Best-of-Breed Solution

Seventy-eight percent of the prospective TMS software buyers we spoke to were interested in evaluating only a “best-of-breed” solution, or a single application for transportation management purposes only.

Meanwhile, 18 percent of our sample said they wanted an integrated suite, which could also mean they were looking for warehouse management or supply chain management software that included some transportation management capabilities. Only 4 percent of buyers wanted multiple best-of-breed applications. 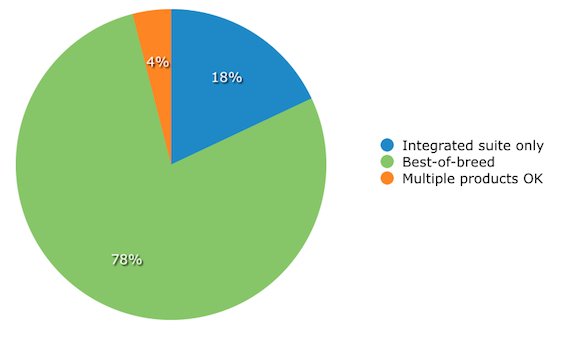 Surprisingly, 82 percent of buyers we sampled had not yet made a decision on deployment mode: 14 percent preferred a Web-based solution, while 4 percent wanted an on-premise system.

According to Fenech, buyers are likely indifferent to the disparities between on-premise and Web-based systems "unless they have a specific need for a Web-based system." 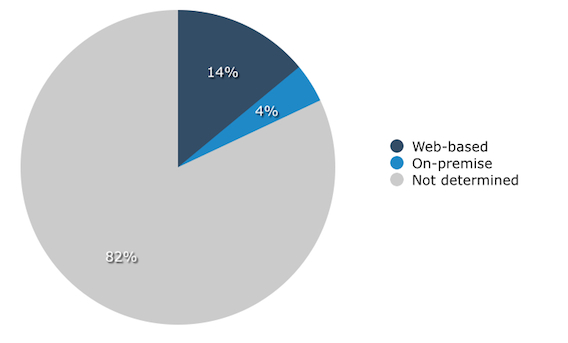 Most Buyers From Third-Party Logistics Industry

Fifty-three percent of buyers we spoke with were from third party logistics (3PL) companies, which provide logistics management for their clients.

Fenech says these numbers align with what she typically sees, as 3PL companies typically have a TMS system that they use and then resell to their customers.

In regard to the food and beverage industry, Fenech says the reasoning for interest in a TMS (or lack thereof) likely relates to the specifics of each company.

"Depending on who the company selling to, they may have specialized needs on the delivery side that may or may not allow them to use a TMS system," she says, adding that businesses tend to benefit most from a TMS when their operations are higher in volume. As such, companies that deliver niche products requiring special handling instructions may be harder to automate with a TMS system. 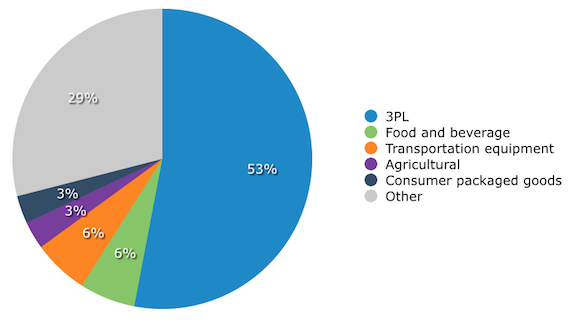 As was noted above, this report only included TMS software buyers from organizations with less than $100 million in annual revenue. In fact, the vast majority (74 percent) of buyers were from companies with $25 million or less in annual revenue. As such, this distribution across industries may not represent the market as a whole. 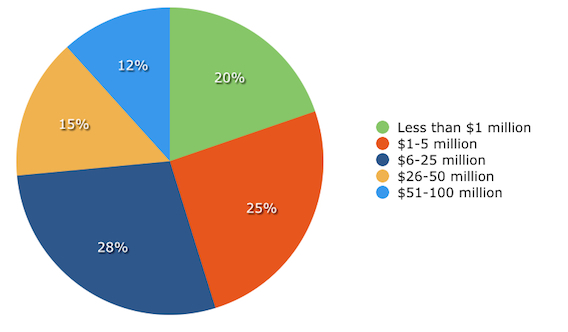 Additionally, 77 percent of buyers in our sample were from organizations with 100 employees or fewer. 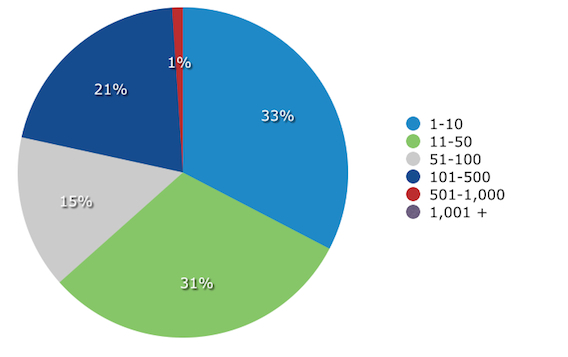 Given that buyers included in this report were from small to midsize businesses that often had a relatively small number of employees, having high-level personnel conduct major software purchases is not uncommon. Many smaller firms lack dedicated IT staff to handle software implementation, and so this task often falls to more senior employees.

"If you have a company with less than $50 milllion a year in revenue and less than 50 employees, the chances are the president or CEO of the company is still very much transactionally involved [with these types of decisions]," Fenech says. 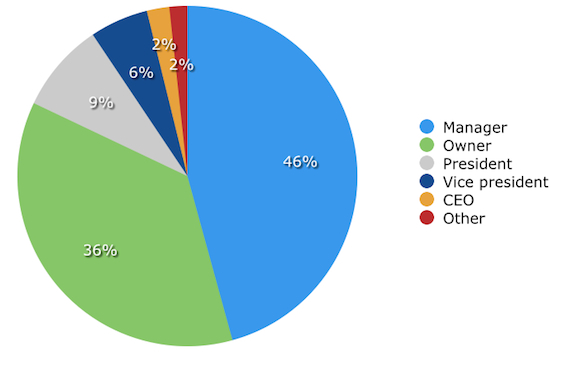 Software Advice regularly speaks with organizations seeking new transportation management software. To create this report, we isolated a sample of small business buyers (annual revenues of $100 million or less). We randomly selected 385 of those interactions to analyze.

To further discuss this report or obtain access to any of the charts above, feel free to contact me at abe@softwareadvice.com.