“Ethical” supply chains invariably mean higher costs for raw materials and labor. It has been estimated, for example, that the cost of an iPhone could effectively double if it were manufactured in the United States, under stricter labor standards. But despite the higher costs of having more ethical supply chains, some believe that it ultimately pays off for companies, as such efforts can improve reputation among consumers and produce greater loyalty from employees.

To help business owners and supply chain managers better understand consumer attitudes towards improving supply chain ethics, we conducted a series of surveys to gauge which initiatives along different links of the supply chain would make them more likely to buy—or pay a premium for—a company’s products.

In recent years, awareness toward supply chain ethics has been amplified by a spate of controversies: In 2013, for example, more than 1,000 workers in Bangladesh were killed when a factory that manufactured clothes for Western retailers collapsed—even though the factory’s owners were warned about the building’s structural flaws. And earlier this year, it was revealed that smartphone manufacturers such as Apple and Google had been using conflict minerals purchased from combatants in the Democratic Republic of Congo in their devices.

With companies increasingly looking to avoid such controversy by improving ethical practices along their supply chains, we wanted to know which link in the chain consumers claim to care about most. And since many researchers have noted the presence of an “attitude-behavior gap” among survey respondents—meaning their attitudes don’t always match their behavior—we decided to use dollar figures as a way of gauging consumer sentiment.

For our first survey, we asked three different groups of consumers how much more they would pay for a product, normally priced at $100, that was produced more ethically with respect to a particular link in the supply chain: raw materials, manufacturing and distribution.

How Much More Consumers Would Pay by Supply Chain Link (Average)

Looking at a distribution of all responses reveals that, of the approximately 1,137 survey respondents for all three of these questions, 35 percent (roughly one-third of each group) would not pay a penny more for a product that was made under one of these ethical initiatives.

How Much More Consumers Would Pay by Supply Chain Link (All) 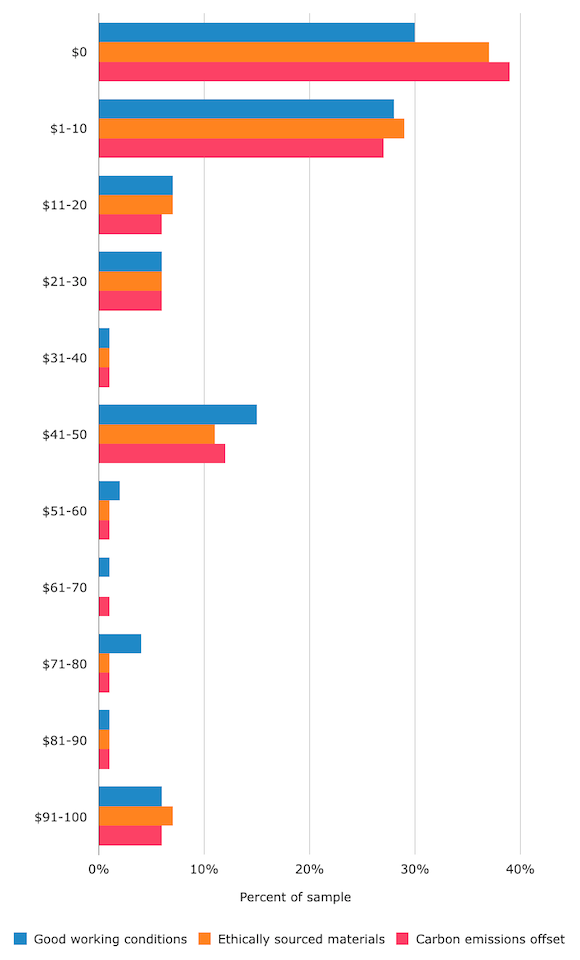 We ran another survey, this time asking respondents which of three broad ethical initiatives would make them more likely to purchase a company’s products: improved working conditions, reduced environmental impact and more involvement in the community. The results were essentially evenly split, with each choice getting about one-third of the vote.

Ethical Initiatives That Would Convince Consumers to Pay More 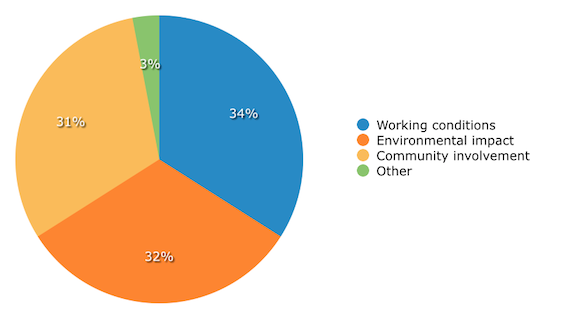 To drill down even further, our final survey asked respondents which specific effort in each broad category would make them more likely to purchase a company’s products, with the chance to provide their own, open-ended response.

Consumer preferences for various environmental efforts were also relatively evenly split. When asked which would make them more likely to purchase a company’s products, 28 percent of respondents said an effort to reduce water usage, 26 percent said the use of biodegradable packing materials, 22 percent said increased use of solar panels and 19 percent said an effort to minimize carbon emissions.

Environmental Effort That Would Convince Consumers to Pay More 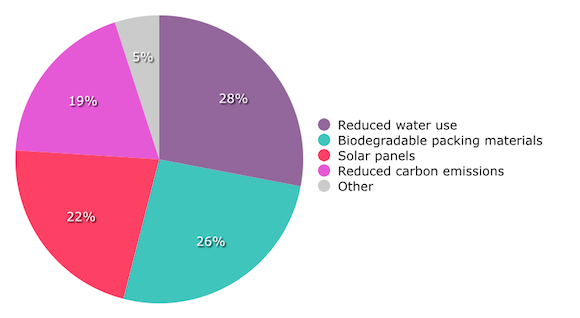 Of the 5 percent who gave an open-ended response (the “Other” category), some choice answers included: “I am not into the whole environmental insanity” and, more cryptically, “the truth.”

Consumers Most Persuaded by Fair Compensation for Workers

The second question was far less divided. Nearly one-half of respondents (45 percent) indicated that fair wages and overtime compensation would be the ethical effort, as far as labor is concerned, that would most convince them to pay more for a product.

Labor Efforts That Would Convince Consumers to Pay More 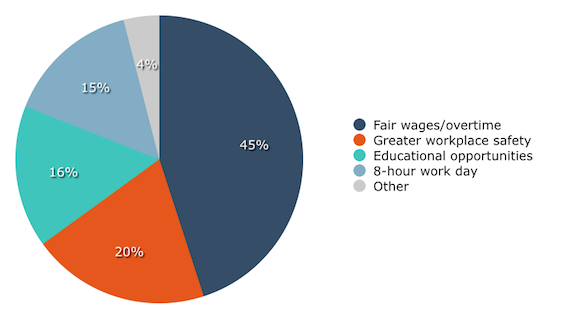 Ensuring greater workplace safety, providing educational opportunities to workers and ensuring an eight-hour work day each received between 15 and 20 percent of the vote. One useful suggestion from the “Other” category (4 percent) was to update break rooms with amenities to make employees feel at home.

Lastly, we asked respondents which efforts to be more involved in the community would make them most likely to purchase a company’s products. In a post-recession culture heavily marked by the loss and outsourcing of blue-collar manufacturing jobs, it is unsurprising that expanding a company’s factory operations in areas with high unemployment was by far the most popular choice.

Community-Involvement Efforts That Would Convince Customers to Pay More 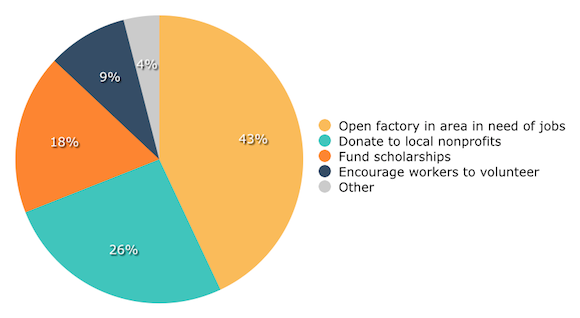 Donating to local nonprofits garnered about one-quarter of the vote (26 percent), while funding scholarships for students in the area also received a significant amount of responses (18 percent). One response from the “Other” category (4 percent) was to provide workers with a “good union contract.”

All of the survey results generally point toward consumers caring most, perhaps unsurprisingly, about labor conditions for the workers who make their products. For businesses with overseas operations, labor conditions can be one of the most difficult facets of the supply chain to maintain high standards on.

“Labor and human rights issues are the most difficult issue at the moment. You can’t look over your suppliers’ shoulders 24/7,” says Robert Handfield, a professor of supply chain management at North Carolina State University. It gets especially complicated, Handfield says, when firms use subcontractors who then use their own subcontractors—which can impede transparency where labor conditions are concerned.

While the aforementioned “attitude-behavior gap” means that consumers may not always put their money where their mouths are, research has indicated that some consumers do base their purchases on the perceived ethics of particular products.

In a series of large field experiments conducted at hundreds of Banana Republic stores, researchers from Harvard and MIT compared sales of products that were advertised as being “environmentally friendly” in one group of stores to sales of the same products, only advertised for their quality and features, in another group of stores. In one instance, the researchers found that sales for “environmentally friendly” jeans were 8 percent higher.

Regardless of how consumer attitudes align with their purchasing habits, fostering ethical supply chains is an issue that companies can’t ignore. More people, Handfield says—especially younger people—now instinctively consider whether a given product is “ethical” or not.

“Organizations are starting to realize that they are part of a network, and they need to think in terms of that network, not just in terms of what’s inside their own four walls,” Handfield adds. “They need to identify who is in their supply chain, and be aware of what that network looks like.”

We ran three separate phases of surveys consisting of seven questions in total. Each survey had approximately 385 respondents.

Our first survey consisted of three questions, with a different group of respondents answering each question. The purpose of asking each group a different question was to reduce bias from respondents, who could feel pressured to indicate a preference for a particular ethical initiative if presented with all three questions. Each question pertained to a particular link in the supply chain, and asked consumers to give an open-ended numerical response regarding how much more they would pay for a product (between zero and 100 percent).

After reviewing the raw data, it became apparent that a disproportionately substantial number of respondents (between 15 and 20 percent from each sample) had indicated they would pay 50 or 100 percent more. Because these answers heavily skewed the averages, and potentially indicated respondent bias toward an “easy” number, I decided to remove them from the data and run a separate analysis.

With those data removed, consumers still showed the strongest preference toward the manufacturing link: They would pay, on average, $12 more for a product normally priced at $100 that was ethically manufactured, and $9 more both for products that had their carbon emissions offset and that were made with ethically sourced raw materials.

To further discuss this report or obtain access to any of the charts above, feel free to contact me at forrest@softwareadvice.com.