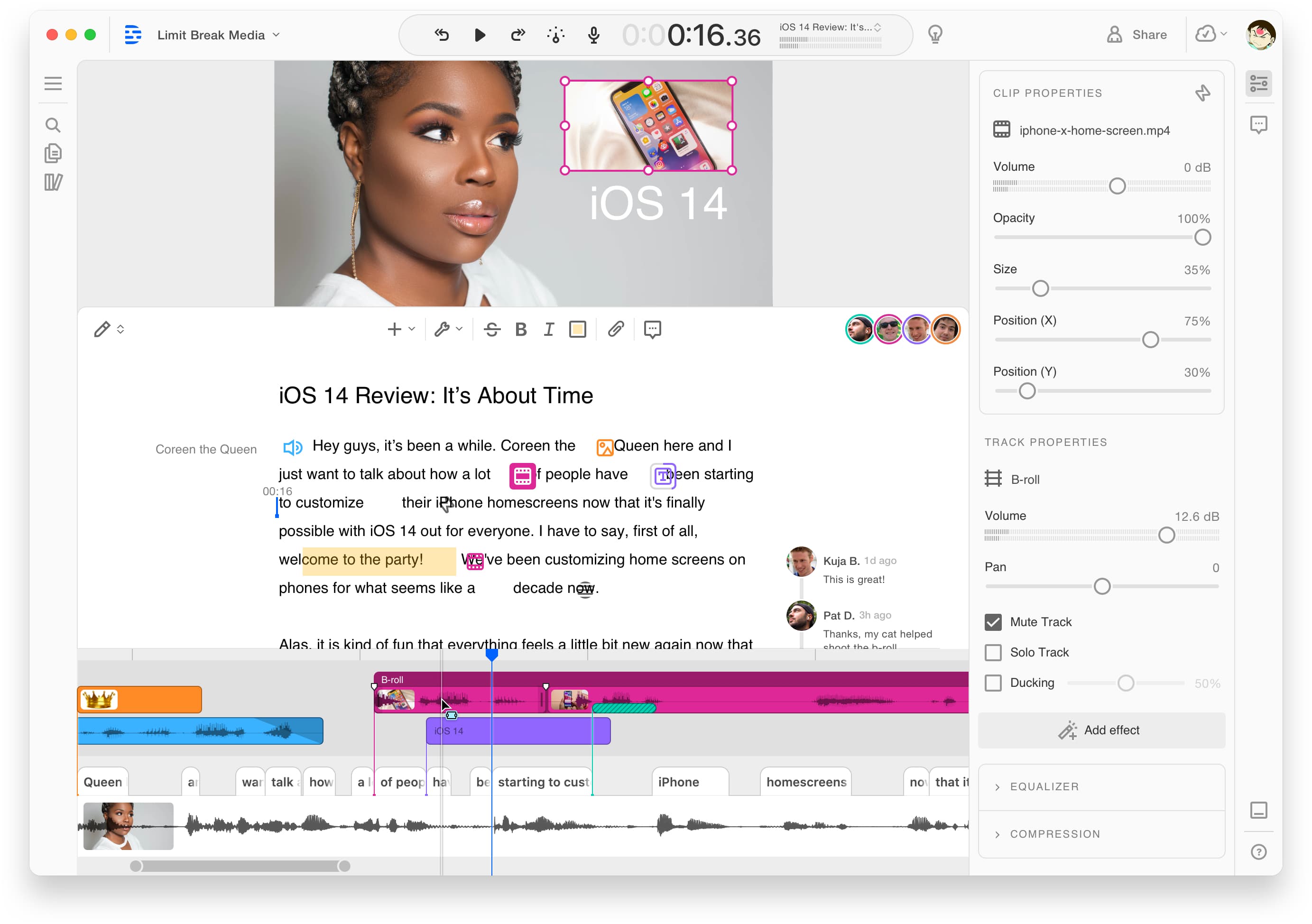 This is a must-have product that will simplify your life. You won't realize how much time it saves until you use it. Fortunately, there is a fantastic free trial to try it out. The shortcuts are really useful and will save you a significant amount of time. There is a lot to learn, but once you do, the software will save your life.

1. Descript's key feature is how it transcribes your audio and converts it into an editable word document. I was astounded to discover how simple it was to effectively cut and paste words while simultaneously moving the audio waveforms. 2. It makes use of the Google speech to text engine, which has been demonstrated to be the market leader in numerous studies. 3. Transcripts are attractive and are designated by individuals. With just one click, you can securely send transcripts with video or audio.

1. It becomes slow with time, and you must pay to utilize it on a regular basis. 2. Although the automatic, entry-level version of Descript has a transcribing accuracy of roughly 95%, there are still grammatical problems. 3. It takes longer than I expected to look over transcriptions and revise them later, so I have to spend more time correcting the transcripts even during my working hours.

Reasons for switching to Descript

Otter.ai does not provide 600 minutes of free transcription services every month. Hence I had to make the switch.

I think if you come from a video or text editing background, Descript will make perfect sense to you within seconds of watching their intro vids. I come from those backgrounds and that was my experience. Yesterday I gave a training session to a colleague who also has editing experience and he immediately took to it and mastered the basics as well, despite not having a hardcore tech background. It really does feel like magic when you start using it and completely fix a long and rambling guest answer in minutes. As I mentioned in Cons above, I've had problems with it in the past, and at the time I started testing Otter as an alternative in case I needed to switch. But I preferred Descript and I think it has better tools, and I've had no problems since then while using it several days each week for 6 months.

1. That it does such a good, incredibly fast job of transcribing and assigning speaker roles 2. That it combines separate audio tracks into a sequence so you can make edits to an entire production, but *also* gives you the ability to drill down into individual tracks for really fine-tuned edits. 3. That it combines audio editing and text editing into a single interface, so you can literally edit your audio track as if you were editing a Word or Google doc. I never imagined that this could be an interface or should be an interface, but after seeing it for the first time, the concept clicked into place for me and I immediately took to it. 4. That it auto removes filler words and phrases, BUT even more important, kind of magically smooths over (most of) the cuts so that you can't tell a cut was made. It doesn't always work perfect, but more than half the time it does, and it feels like I'm working with software from a sci-fi future. 5. I want to say I love their Overdub feature, where you can deepfake your own voice (or someone else's on your team if they give you permission, I think--there are some privacy rules in place that I haven't fully explored). It also feels like a sci-fi technology. However, in my day to day usage of this tool, I never use Overdub because I'm almost always editing other people who aren't Descript customers. I'm eager to test it one day with my own voice recordings, but for now I can't really give any feedback on its effectiveness.

1. At the end of 2020 I had some bad experiences with server-side delays and edits not being saved properly, which reminded me that some of the core functionality for this service is beyond my control because it's not happening locally. On the other hand, I haven't had any problems since (it's been about six months). 2. They update the software very frequently, and often make changes to the interface at the same time. I now just prepare myself to deal with a relocated UI element whenever there's an update, but I don't enjoy the fresh challenge each time it happens. Rapidly making incremental improvements to functionality makes sense to me, but I'm not sure it should be the approach for UI improvements since that can be so destabilizing to a user's workflow.

The concept is amazing and could save hours on a podcast edit… but, it just doesn't work correctly or as you would expect a lot of the time. Once the automated transcription improves and the workflow stabilizes, this could potentially replace the various tools I use to edit audio and video.

The ability to edit an interview or podcast just by editing the text is incredible. The workflow is fairly straight forward – import audio file, choose how to transcribe, wait…, edit the transcript & audio in various ways, export or publish as needed.

The automated transcription is good, but not great. There are always little errors that seem obvious to a human – capitalize the first letter in a sentence, don't capitalize a word in the middle of a sentence, abbreviate doctor as Dr. when a name follows, etc. – and they seem to always show up, even when they've been corrected previously, so it's unclear whether the 'machine' is actually 'learning'. The app appears to not be built as a native app for macOS which means it lacks certain core features. The most annoying to me is that the window always opens in the default size (i.e. small) and never remembers the sizing or positioning that I choose every time I open it. The developers are rapidly adding features, but almost too quickly. Once I get used to a feature or function, it doesn't take long for the menu item to be changed or moved (Share, Export, Publish all do similar–though different–things, and have each had their turn as a unique menu item or being grouped together in various ways). I got very efficient at correcting the transcription (which, unfortunately, must be done frequently) until they changed the entire process of editing the transcript.

Descript has the potential to do it all – transcribe, edit, publish – for one subscription.

Made scaling my podcast agency so easy!

We've been able to scale from one podcast client to 20+ in less than a year, and have onboarded 2 editors. It's making it possible for my business to scale rapidly, and revenue to skyrocket!

I love that I'm able to collaborate with my editing team so that we can implement quick changes from clients no matter who is available. It was super easy to bring in new team members and train them on the workflow as well. I also love how the transcripts make it so much faster than other apps to edit - the combo of seeing words + waveforms (and the search/delete option) cut editing time in half.

Clicking and dragging still needs some work, not sure yet about the new toolbar. I also really would like to be able to use VSTs to denoise easier, right now the workflow starts in Audition or Pro Tools for any processing (our clients honestly don't understand that they need to record in quiet spaces) and then we bring it into Descript to do the edit.

Just ease of editing & ease of collaboration. Adobe is a significantly higher cost to collab with, and definitely doesn't have the same level of collaboration capability.

Reasons for switching to Descript

Easier to edit with the transcript