In this changing technological environment, what is the fate of the traditional conference phone call? And which businesses should invest in UC solutions for videoconferencing?

In order to answer these questions, we surveyed 389 employees who use videoconferencing and conference calls at work about their conferencing preferences. We then turned to telecommunications experts at the forefront of conferencing innovations to help interpret our findings. Here's what we discovered:

1 in 4 Employees Uses Video or Audio Conferencing at Work

In order to arrive at a sample of employees that would only include those with conferencing experience, we first asked our respondents whether they currently use some form of audio conferencing or videoconferencing at their jobs. 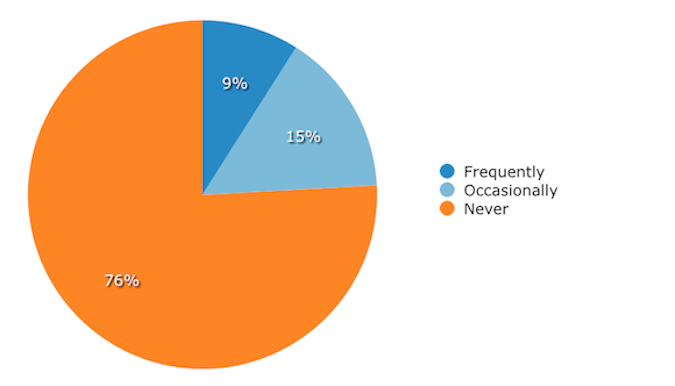 Nearly one-fourth (24 percent) of our sample, combined, worked in jobs that involve some use of conferencing: 15 percent said they “occasionally” use it, while only 9 percent of our sample reported “frequently” using conferencing technology at work.

Considering that our survey didn’t target professionals or employees at enterprise corporations with advanced UC systems, this is quite a high percentage.

When we look at the U.S. Census Bureau’s data on the national economy from the 2012 American Community Survey, it’s evident that the majority of workers are in industries where the current business model doesn’t necessitate extensive videoconferencing interactions. 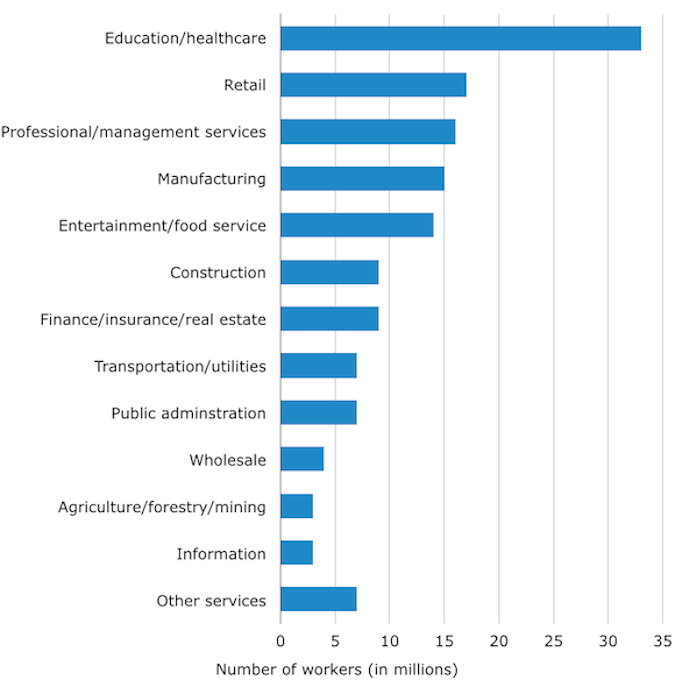 The largest industries by number of employees are education and healthcare, which together employ just over 33 million workers. Neither industry has traditionally made heavy use of videoconferencing (though, of course, the technology has increasingly popular applications in both). Manufacturing, construction, retail and entertainment and food service are also major industries where conferencing isn’t a primary means of communication.

In contrast, IT—one of the few industries where we could expect to see nearly universal adoption of some conferencing method—employs just under 3 million workers. Thus, even though most U.S. workers are not in industries that traditionally require communication via audio or videoconferencing, we still found that one in four are using conferencing technology in the workplace.

After excluding respondents with no conferencing experience, we surveyed our remaining sample of employees who use conferencing technology at work to find out whether they use videoconferencing or audio conferencing more frequently. 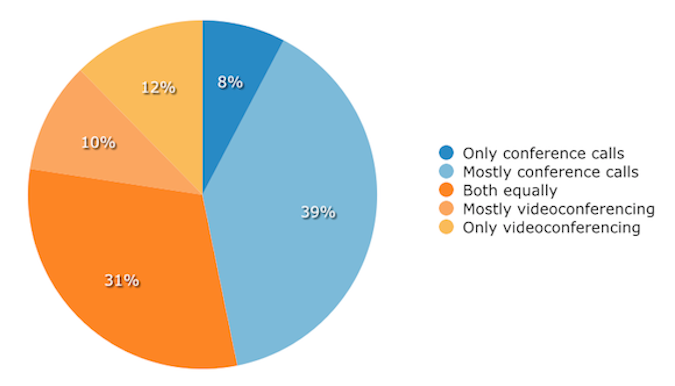 Mike Nessler, executive vice president of event services at Intercall (the largest global provider of conferencing services), notes that “we’re seeing broadening adoption of Web conferencing solutions.” However, he notes that audio conferencing still continues “to play a role as [a] backup or [as] an integrated part of multimedia solutions, which adds a layer of value that video by itself may not provide.”

When we asked employees whether they preferred videoconferencing or conference calls, we found that allegiances to the two methods were about equal. 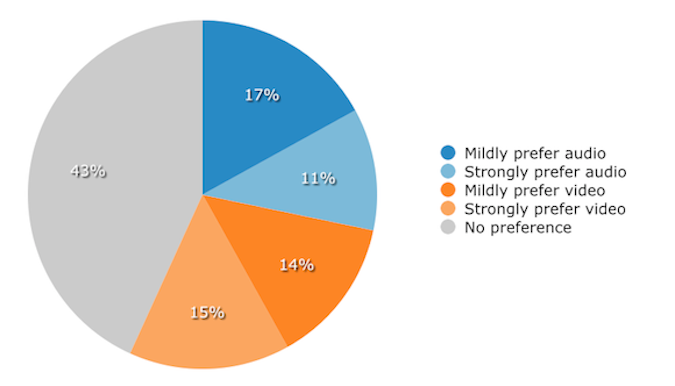 A combined 29 percent of our sample said they preferred videoconferencing, while a combined 28 percent preferred audio conferencing. These percentages are too close for us to generalize as to which method of conferencing is ultimately more popular.

Another interesting finding was that only 57 percent of our sample expressed any sort of “strong” or “mild” preference regarding conferencing methods—43 percent expressed no preference at all. This finding strongly suggests that these employees favor different conferencing methods for different purposes, since they don’t have a preferred solution that serves as their first recourse in every context.

In order to get more specific results concerning the purposes for which employees use conference calling and videoconferencing, we presented our sample with some common use cases for both methods, and asked them in which cases they would prefer one method over the other. Here’s what we found: 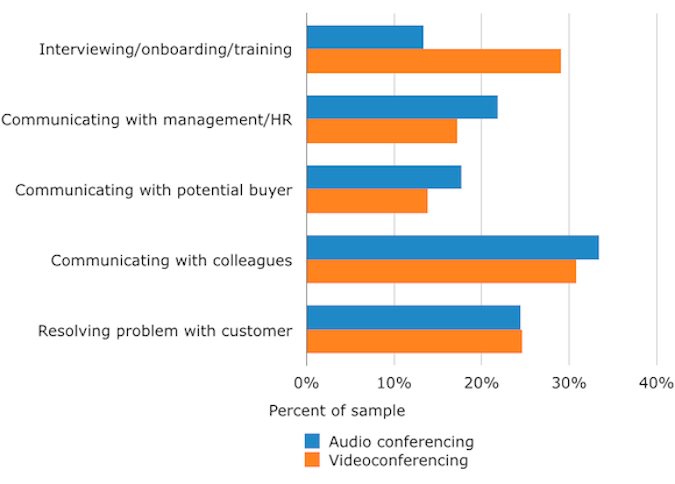 These findings suggest some interesting trends. First of all, there’s no statistically significant difference in the degrees to which employees prefer videoconferencing or audio conferencing for communicating with coworkers. There are marked differences for other use cases, however.

“There are three or four business processes where we’ve seen evolution, such as the use of webcasting and video-like technologies to train employees and to augment HR processes like recruitment, benefit enrollment and onboarding,” he says.

Hugo Romano, product manager at Web-conferencing service UberConference, offers one reason as to why videoconferencing is preferred in these contexts.

“If you’re meeting a person for the first time, you need to see body language to understand how she or he communicates,” he says, adding that this ability is also vital when employers have a remote workforce.

Nessler observes that “there are great opportunities for using video technologies to augment customer service processes—the building blocks are in place to do this, but they haven’t been used thoroughly or deeply.”

Our findings confirm Nessler’s point, since the employees in our sample expressed a very slight preference for using videoconferencing in customer support contexts.

Twenty-two percent said they’d use a conference call to communicate with management or HR, while only 17 percent would use a videoconference in this context. Since employees already know their managers and HR staff, it seems that face-to-face communication isn’t a necessity.

Additionally, 18 percent of our sample preferred audio conferencing for communicating with a potential buyer, whereas only 14 percent would use a videoconference for this purpose. This suggests that employees feel that different conferencing methods serve to make good impressions on different customers.

Ability to Read Faces With Videoconferencing Is Top Advantage

Perceived Advantages of Videoconferencing Over Audio

According to our sample, the primary benefit of videoconferencing is the improvement in communication that comes from being able to read faces and body language. Further, our respondents believed that nonverbal communication also improves interactions with coworkers: 28 percent said it fosters a team or collaborative atmosphere in the workplace.

Employees also liked how videoconferences keep them focused on the meeting (31 percent) and utilize desktop-sharing functionality to make it easier to exchange files (29 percent).

Thirty-five percent of our respondents liked the easy setup of audio conferencing (and it’s become easier than ever thanks to such recent innovations as conferencing without using PIN numbers, which is supported by UberConference and other services).

Romano explains that UberConference specializes in audio conferencing because of the technology’s staying power.

“We’re still relying on regular audio conferencing because of reliability and interoperability. ... Not only that, but it satisfies our basic needs for communicating,” he says. “Everyone seems to be jumping on the videoconferencing bandwagon, when actually, we think that audio alone works for the majority of use cases.”

The other primary benefit of conference calling, according to our respondents, is the ability to multitask. Because you’re invisible to other participants on a conference call, you can organize your inbox, finish work on a project or any number of other tasks. Now that audio conferencing is just as easy on mobile devices as it is on deskphones, opportunities for multitasking are innumerable.

Some respondents actually preferred the inability to see other participants’ faces in an audio conference (24 percent).

Romano notes on this point that “frankly, not very many people want to be seen.”

Only 16 percent of our sample thought that conference calls keep the focus on the conversation better than videoconferences. This is perhaps because so many of our respondents viewed conference calls as a multitasking opportunity: While multitasking has its benefits, it decreases the overall amount of attention that an employee can devote to any one task.

Adapt Your Company’s Conferencing Solutions to Use Cases

Our research shows that directly comparing audio and videoconferencing technologies can be equivalent to comparing apples to oranges. A company’s decision regarding which conferencing solution to adopt hinges on what contexts and processes the solution will be used in.

Nessler explains that use case is the primary factor to consider when evaluating conferencing solutions.

“Too often, companies will buy features without thinking about use case or ROI [return on investment]. Companies buy the capability, but they don’t ensure that changes in the business process are being driven the way they need to be—and then you don’t end up with the value that you should as you deploy those capabilities,” Nessler says. “What’s important is to focus on use case and gathering the right data to drive change in the business process.”

Considerations such as whether your business depends on a large remote workforce, whether internal processes need to be streamlined to maximize ROI or if your business model involves a large customer service component should guide your approach to the use of conferencing technologies.