Unified communications (UC) software and services interconnect the communications technologies that define the modern workplace. Voice calling, voicemail, chat, email, video conferencing, presence and desktop sharing are among the most well-known of these technologies.

In the past, corporations utilized specialized software and services for different modes of communication. As communication technologies have evolved, the focus has shifted to ensuring that communication can flow easily and naturally through as many channels as users need. For instance, UC clients allow users to shift calls between a hardware IP phone, a desktop softphone, a tablet softphone and a smartphone—all while displaying a single corporate identity and number. Naturally, these clients come in both mobile and desktop versions.

Because one of the primary goals of UC is making life simpler for the user, the interfaces for users’ clients are integral components of UC solutions. A well-designed interface helps users navigate multiple communications channels, whereas bad design can result in businesses paying for features that employees never use. So, we compiled this list of some of the most expertly designed UC client interfaces on the market today.

OnSIP is a leading provider of hosted PBX and SIP trunking services. (If you’re not familiar with these terms, see our buyer’s guide to hosted PBXs and our explanation of SIP trunking for more information.) My.OnSIP is a UC client that’s included for no additional charge with OnSIP’s hosted PBX plans. It’s a Web-based client, which means that it easily runs on multiple devices and platforms. The user interface for the client allows you to view call logs, chat, voicemail and email—all within a single inbox, featuring clearly-defined buttons for navigation. 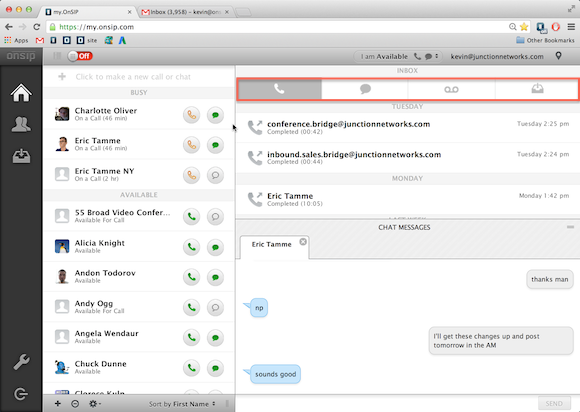 Nicole Hayward, vice president of marketing and product management at OnSIP, explains the design philosophy that informs the user interface for My.OnSIP.

“When designing My.OnSIP, we aimed to create a super-efficient, real-time communications [RTC] dashboard that runs entirely in-browser,” she says. This was no easy goal, she observes, because the client had “to fuse so many different contexts for communicating: from instant messaging to transferring phone calls, to answering phone calls, to checking whether a colleague is on the phone, to managing voicemails—and much more.”

In order to make this possible, OnSIP “landed on a dashboard that treated several well-known communications paradigms as 'apps,'” Hayward adds.

The universal inbox allows users to stay on top of multiple modes of communication simultaneously, and its large buttons make it easy to navigate between the various communications “apps” that My.OnSIP supports. Meanwhile, its sleek design prevents the user from getting overwhelmed by too many functions.

“Employees available for a call or a chat will display a green phone button or a green chat bubble next to their names,” Hayward explains. “A user can simply click these bubbles to initiate a call or chat with their team members—no dialing necessary.”

NEC is a global leader in telecommunications and IT. UNIVERGE 3C, its Unified Communications solution, is a software-based Internet Protocol private branch exchange (IP-PBX), meaning a system that connects a business’s extensions with the public switched telephone network (PSTN) via the Internet.

UNIVERGE’s UC capabilities go far beyond the functionality of a basic IP-PBX, however, providing the sophisticated modes of interconnectivity between devices demanded by enterprise, government and military users.

The NEC UNIVERGE 3C UC client, which is the user-facing component of UNIVERGE for both desktop and mobile devices, offers a cleanly designed and fully featured user interface.

Rod Johnson, senior product manager at NEC, calls it “a thin client design based on Web-based principles” (in other words, the app depends on a server running UNIVERGE software to function).

The client also offers a dedicated manager for collaboration functionality, which groups helpful meeting tools and data in one intuitive location. 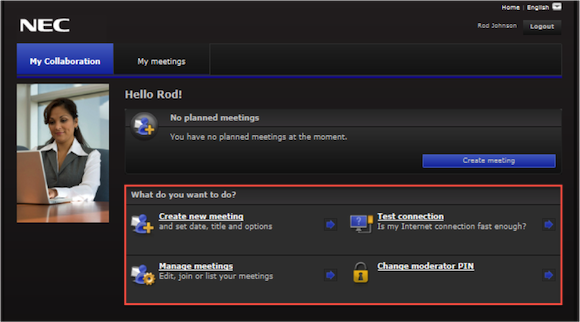 The mobile client allows users to access UNIVERGE on their devices, and includes many of the same features as the desktop version.

Nextiva is a major provider of hosted PBX and SIP trunking services. Bundled with Nextiva’s PBX solution, which is known as Nextiva Office, this SIP-based VoIP App runs on most major desktop and mobile platforms (Windows, Mac OSX, iOS and Android). The VoIP App enables a number of UC features at a price that small businesses can easily afford. 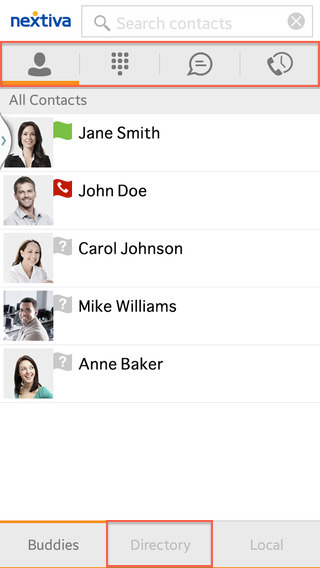 Yaniv Masjedi, vice president of marketing at Nextiva, explains that the interface for the Nextiva VoIP App is designed to “mak[e] the customer experience an effortless experience—it’s simple, intuitive and easy to use. ... We know that business owners don’t necessarily have the time or interest to learn a complex or clunky software.”

These concerns are evident in the interface for the mobile version of the VoIP app, which, as Masjedi explains, allows you to “manage your entire business’s communications system from your iPhone.”

The interface isn’t cluttered with text or unnecessary tabs. Users can easily switch between contact information, a traditional dialpad, chat and call history. Another tab allows for easy access to the user’s corporate directory.

Useful features of the Nextiva App include video conferencing via the app itself and chat rooms to organize communications with business colleagues.

XO Communications offers VoIP services including hosted PBX and SIP trunking. These services include an app known as WorkTime, which facilitates remote and mobile access to UC features. 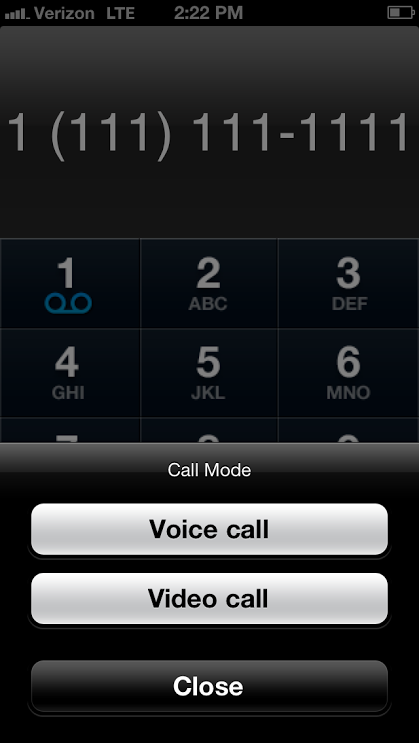 Steve Lingo, senior product marketing manager for unified communications at XO, neatly sums up XO’s design philosophy for the app, which is “to make it easy and familiar to users.”

XO WorkTime clearly reflects this philosophy in its interface. For instance, the app provides large buttons that allow users to easily switch call modes between voice and video. Because the app’s design recalls the interfaces for such mobile operating systems as Android and iOS—with which most users are already familiar—employees can quickly learn to use its features.

WorkTime’s range of UC features is so extensive, Lingo observes, that XO “has sold many phone-less installations, which have proven quite popular.”

In other words, WorkTime can be substituted for a traditional analog or hardware IP phone instead of merely supplementing the features of a deskphone. It supports voice, instant messaging, presence, text and video conferencing.

Lingo explains that the app is designed “to address two of the fastest-growing, most important IT issues facing enterprises today: worker mobility and BYOD” by allowing you to use the number for your deskphone on your smartphone and computer, as well.

Additionally, users can make VoIP calls using cellular data or minutes or using WiFi. This means they can select the cheapest way to make a call while still using the same corporate identity across multiple devices.

Mitel specializes in innovative VoIP and UC services. MiVoice, which is Mitel’s IP-PBX software, can be installed on-premise or hosted in the cloud. Users access the UC features of MiVoice via the MiCollab Client. 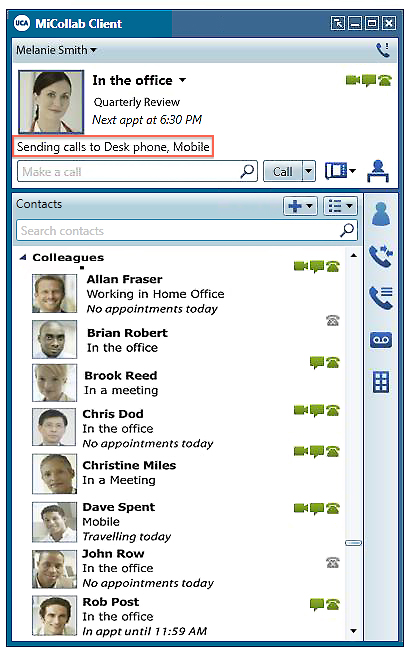 Scott Snider, the solutions marketing manager for unified communications and collaboration at Mitel, explains that MiCollab Client “was designed to enhance the effectiveness of ‘in-the-moment’ communications for employees.” MiCollab achieves this goal, he adds, with its “simple interface[, which] provides intuitive navigation for users so that they can ... escalate collaborative sessions freely between voice, data and video services.”

Users can clearly see where calls are being routed via the interface (pictured above). Moreover, the app’s contact list displays detailed presence information, allowing employees to see whether their co-workers are working remotely, in the office or in a meeting. The UI also displays what modes of communication can be used for each contact.

Another helpful feature of the MiCollab Client’s UI is visual voicemail. Snider explains that this feature allows users to select which message to hear first, and to see message-waiting notifications in the home screen of the interface. These features make it much easier for users to keep up with their voice messages.

The user interfaces that we’ve surveyed are all excellent examples of the direction in which UC is heading in 2014. Much more than the technical effort to integrate communications systems, UC solutions now aim to make all of the most important modes of business communication as accessible to the user as possible—through elegantly simple design.