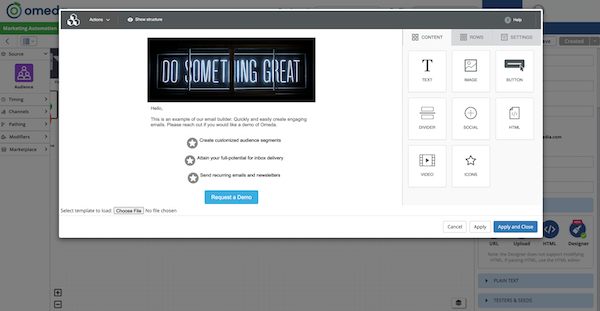 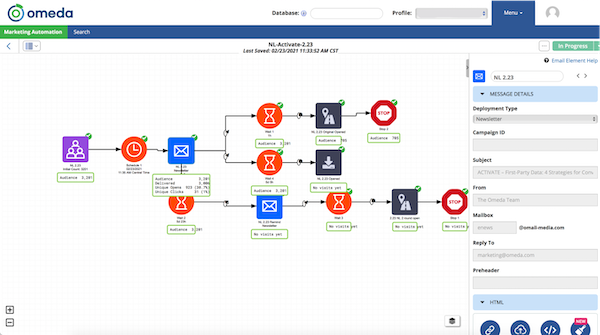 Omeda's staff has been incredibly helpful and supportive since we onboarded with them several years ago now. They are helpful in making recommendations on how we use their platform and help to make us aware of current trends or how we could be better utilizing their platform.

Once fully implemented it was fairly easy to roll out campaigns to our websites, email, etc.

The Form Builder is the platform with the hardest learning curve for me. With that said Omeda has made large strides in making this more user friendly.

We needed a more robust platform that would help drive our business and provide a unified database.

We've been with Omeda for 18 months now and it has been great to work with a company in the publishing and marketing space that understands the business and understands our business, B2B, specifically. We have a team at Omeda that works very closely with our Audience Development and Digital departments and I don't think there is a day that goes by where we don't ask our reps a question or they are responding to our tickets in a timely fashion.

The overall feature set is impressive. From list management to the built-in Customer Data Platform and the email marketing / sending platform to creating customized journeys for readers that push content depending on action to Social Media, web sites and additional email sends. Combining all of these features really helps when having to look at all the different platforms out there that can provide each of these services separately... makes the decision to purchase that much easier knowing that its under one roof.

There's always a need for iteration when software is involved. User interface oddities here and there come to mind, however, these oddities can be overcome just by learning the software and understanding why things are the way they are. Can it be improved? Absolutely! Omeda constantly pushes out new builds throughout the year that address things and are open to putting your requests into the build sequence.

We chose Omeda over other platforms because they "get it" when it comes to publishing. It was evident from the beginning that we were talking with kindred spirits. The also brought a big toolbox to the table. What we needed them to be... they were. Helping us to not only replace the traditional 'circ' system but also replaced our CDP and ESP vendors. They also have an amazing conference they put on every year that is a meeting of like minds in the industry and very informative on where the platform is going and how others are using it... we are also included in their Client Advisory Board and are able to ask direct questions to Omeda's executive team and our industry peers.

We made the switch because it was time, our previous provider was not developing along with our pace in the digital world and we needed a solution that would give us new ideas instead of just trying to keep up.

Despite the items listed in "cons", our overall experience has been very positive. One area Omeda excels is in client service. We love [SENSITIVE CONTENT HIDDEN], our account rep. When [SENSITIVE CONTENT HIDDEN] was our account rep it was the same. Omeda is very responsive and always willing to show us how to use the product to achieve our business goals. When we hit the pause button on an initiative, or pursue an alternate solution, Omeda is very flexible with us. We truly feel like we have a partner who wants to help us succeed and who is always pushing us forward.

The ability to have one centralized location where we can store vast amounts of demographic, firmographic and behavioral data that we can activate instantly via email or off-platform in social and search is paramount to our business. Additionally, Omeda's previous management of our print fulfillment eased the integration of our magazine subscribers into our known audience. Omeda gives us the ability to handle all the key elements of our business. We can deploy our editorial products and track engagement. We can conduct audience development campaigns using Odyssey, personalizations, and standalone campaigns. We can provide continually refreshed audiences to activate on other platforms like Google and Facebook. Lastly, the sheer amount of data Omeda is able to store gives us access to insights on our audience we've never had until now.

The UI of accessing standard reports does not compare to that available from many competitors. It is cumbersome to pull reports and often involves complex queries in Audience Builder. Outputs often need to go into another piece of software for visualization or manipulation. Additionally, while we know you are a customer-centric database, it has been challenging for us to get basic information on subscriber growth and attrition. We feel that with so Omeda having so many publisher clients we can't be alone in this request. Anyone managing a newsletter or digital subscription product needs to know how many subscribers they are adding or losing on a regular basis. Lastly, while we have heard that improvements are on the horizon for Dragon Forms, their sole benefit right now is the immediacy of information passthrough into Omeda. Their UI and ability to be customized lags behind other free options and frequently forces the question of whether user experience or CDP convenience is more important on a project.

Nobody else had all the pieces integrated in the same way. We felt Omeda gave us a singular solution to replace many others.

The strategic and cost-saving benefit of having our audience data and activation mechanisms live with one vendor instead of numerous vendors we had previously stitched together to try and achieve the same outcome.

Implementation went well. It was a huge project with a massive amount of data. We were converting a large audience database with print, digital, email, and behavior information. At the same time, we had to ramp up IP addresses, clean the email data, and migrate over to the Omeda ESP. We had to connect the Omeda CDP as well. For a large under taking, the project management went well and it ran relatively smoothly. Issues were dealt with and we moved forward.

Ever look at your operations team and ask yourself why does it take so long to get things done? Ever ask, why are things so hard and then look at your tech stack with the volume of systems and shake your head and say, oh, that's why. Well that was the boat we were in. We removed 3 systems: Salesforce Marketing Cloud, Tealium and an audience system called Knowledge Marketing. We consolidated everything into a single technology stack on the Omeda platform. Our audience database members grew by 37%. We had 56% efficiency in email operations which is staggering for a small team. And we had 100% redeployment of our database and development IT resources allocated to true development projects to grow our business. Guess what folks, that's what I call true growth, scale and efficiency in operations.

When you consolidate systems, you obviously are removing a best in breed system that has tremendous power because that applications core existence was built for a single job. So we did trade off on some functionality in the area of CDP and on the audience platform. However, I go back to the over whelming increase in operation efficiency within the email department. Our email deployment team is small. The Salesforce Marketing Cloud tool, if you have used is it before is a large beast. To many clicks, hops, jumps from screen to screen. Complicated and time consuming. The email team sets up and deploys emails in a fraction of the time it takes. And with the audience database being directly integrated in real time with the email platform, the job is seamless and the reporting is tremendous. 360 degree, non-stop view of the customer. So there will always be a tradeoff on some functionality. I can live with that to gain efficiency, scale and better visibility into the data.

From the initial data conversion into their Customer Data Platform, through the training and ongoing support in our weekly meetings, Omeda has been a great business partner. The subscription fulfillment systems and personnel are solid, and the email tool is highly functional. Additionally, the Customer Data Platform and query tools are a powerful combination that allow me to acquire more new subscribers from our websites, while collecting and analyzing any data point I can think of for our audience. Omeda is constantly adding enhancements to their existing tools to give more insight into audience behavior and improve response on the audience-facing functionality such as marketing automation, personalized experience based on audience segments. I love that they also do a great job of communicating examples of tactics that are being used successfully by their customers. Overall, we've been able to at least double the number of subscribers we acquire from our websites and increase advertising revenue via their customer data platform tools, and along the way we're building a robust stack of audience behavior and business intelligence data that we use to improve the performance of our email and other audience promotions.

Their query and customer data platform tools are powerful and relatively easy to use. Their support team is great at helping you learn and use the software.

Their form builder is powerful but complex and you'll probably need help from their team or an experienced HTML/CSS person on your team if you go the self-service method. Luckily they help with initial setup and integration and can build all the forms to your specs if you need to.