Americans are kicking up their martial arts practice. Today, more than 5.5 million men, women and children bow to the mat regularly.

Between competing studios, the wide variety of styles and other distractions, dojo managers engage in a constant battle to attract and retain students.

With advice from an expert taekwondo instructor and behavioral data from 300 martial arts participants, we put together four effective techniques to boost student attendance and retainment. 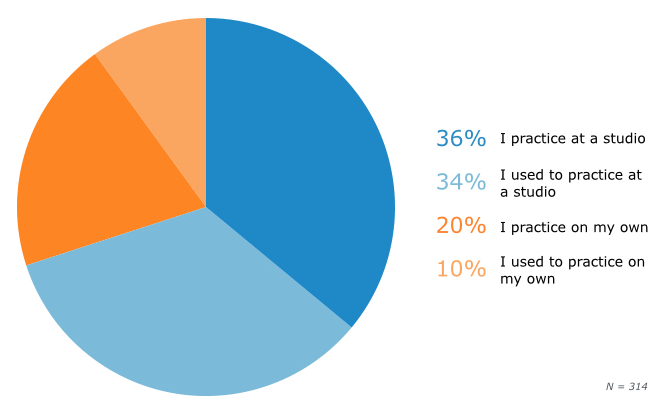 There are several clear benefits to practicing martial arts in a group setting, says Master Fabian Nuñez, president of the American Taekwon-Do Federation, kickboxing champion and instructor with more than 30 years of studio management experience.

Without a quality instructor, he says, people lose the benefits of a group setting, such as:

Besides, if you’re learning to throw someone, you need a training partner. 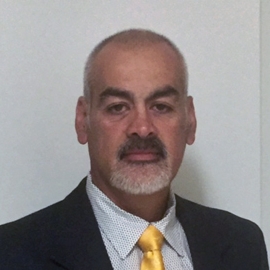 “You need an instructor to continue to mold your technique as you move up through the belt levels. Every week you come into the classroom to get instruction, so you don’t veer off the path and create bad habits.”

Many studies show that group exercise of any kind is beneficial for the following reasons:

For example, consider the following stats:

Technique 2: Tap Into Students’ Motivations for Fitness and Self-Defense

People begin martial arts for various reasons, but a few common motivations stand out. Getting fit and active is the top reason for most men and women (51 and 48 percent), with self-defense (37 and 36 percent) and gaining discipline (13 and 9 percent) as less common reasons.

Nuñez says this mirrors his students’ motivations: “A lot of the parents want it for confidence and self-defense for their kids; the adults are more wanting it for exercise and self-defense,” he says.

While those under 18 aren’t included in our survey, it’s estimated that around 6 million children practice martial arts in the U.S. Nuñez says young students are vital to a martial arts studio, not only because they make up a large portion of the business, but because they offer an opportunity to attract their older family members.

“I’d get the kids, and the parents would follow,” he says. “Some ended up getting into teaching or demonstrations, or being mentors and helpers for others, so it can cater to all walks.”

While martial arts studios accept that some students drop off over time, Nuñez has had success attracting their parents or siblings by offering them free classes.

Your next move: Promote the fitness benefits of martial arts as well as the practical applications of your chosen style, and consider anyone in your studio a potential student.

Technique 3: Promote the Integrity, Skill and Leadership of Your Instructors

What do people look for when choosing a studio or dojo? The survey results are clear: Quality of instructors is the top factor for 53 percent of respondents. The cost of classes and equipment comes in a distant second with 18 percent. 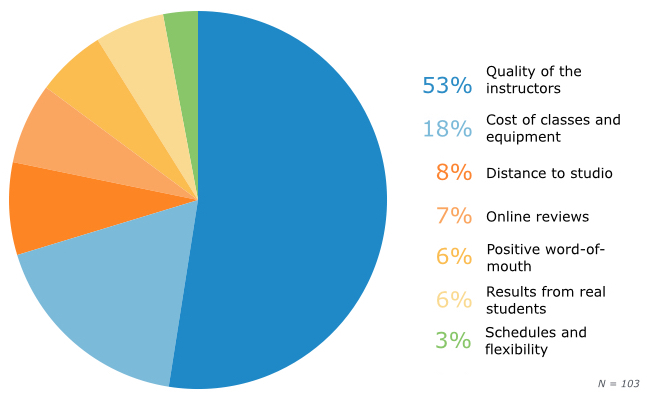 As mentioned above, a good instructor keeps students on track with correct technique and habits. But, they offer more than that.

First, instructors with a strong history of competition and success can attract serious students who want to follow the same path, as well as students who simply want to learn from someone who demonstrates a high level of dedication and perseverance, such as Nuñez:

More importantly, however, an instructor’s role is to be a good communicator and leader who demonstrates integrity and honesty, says Nuñez. He does this in a few ways:

Offer a preview of the program. “I always strongly suggest that they come to a free class or two to make sure you like the atmosphere and the instructors,” he says. “You want to get them in the door to show them what you offer. You could bring them in and sit down and talk, but I’d rather do it by action.”

Be transparent. Once someone decides to learn more, Nuñez suggests that managers and instructors offer complete information about the class curriculum and what’s expected of students at each skill level. Explain whether it’s a month-to-month or contract format for payment, so students know exactly what they’re getting.

Get out in front of your community. Martial arts instructors located in smaller communities have an opportunity to become a recognizable face. When Nuñez operated his studio, for example, he maintained relationships with the local chamber of commerce and scout troops, performed demonstrations for local schools and hosted an after-school program.

He also regularly contacted local news media to share the success from competitions or tournaments.“Then I’d retain students, or people will send new students by word-of-mouth,” he says. “My reputation is hopefully as good as gold.”

Your next move: Instructors are your biggest draw, so keep them in the public eye through local events, partnerships and demonstrations to share the success of your students. Exude integrity to your students.

We also wanted to find out what makes people quit practicing martial arts. Most (41 percent) say they became too busy and 22 percent quit because it became too expensive to continue. 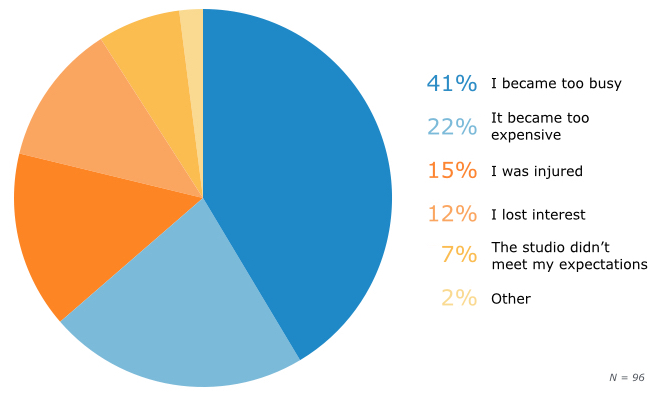 We all know what “too busy” means—most likely that, for them, martial arts failed to become a long-lasting priority. Nuñez understands that only a certain percentage of students continue practicing for many years, but there are some ways to make classes more engaging to retain students:

1. Structure classes in a way that motivates instead of discourages. Nuñez says he separated students into age brackets as well as skill level. Adults don’t want to attend class with children, so it’s important to carefully group students so classes make sense for their level.

It’s a balance, he says, to make sure students feel they are progressing, but also that they are given the time to master solid technique.“It worked for me to separate the ages out and work with them at their own level,” he says. “I could play more games with the kids, then do different activities with the adults.”

2. Timing of classes can make an impact. In a similar way, you can schedule classes so that it’s as convenient as possible for students. Maybe weekend classes are better for young students and their parents, whereas classes in the early evening could work better for working adults. You can survey your students to find the best window of time.

Your next move: Retain students by tailoring your programs to your students’ needs; group similarly skilled students together and schedule classes around their most preferred times.

How Can Martial Arts Software Help Attract and Retain Students?

Like gym or club membership software, martial arts software helps manage your students, equipment, schedules and payments so you can focus on teaching.

Check out our list of the top martial arts software available with reviews from real users. Or, give our software advisors a call at (844) 687-6771 for a free consultation to find the best system for your studio. Email Blasts vs. Drip Marketing: Which Is Better for You? 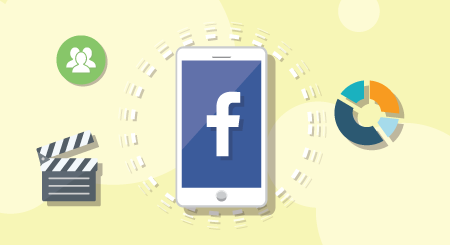 6 Tips to Help You Boost Your Facebook Marketing Game