(67)
Overview
Reviews
Comparisons
Alternatives
CS-Cart is a hosted e-commerce solution. Key functionalities include tools to manage website content, design, products, shipments and returns. CS-Cart offers a drag-and-drop user interface that allows users to arrange data blocks in their storefront using a built in layout editor. Users can customize storefronts using multiple themes. Additionally, users can change storefront background, color scheme and fonts. CS-Cart offers integrations with various payment gateways and processors, as well as shipping providers such as FedEx and USPS. Further, CS-Cart has a Google export add-on with which products can be exported to eBay, Google shopping and Facebook. CS-Cart provides its services on a one-time licensing basis and support is provided via live chat, emai... 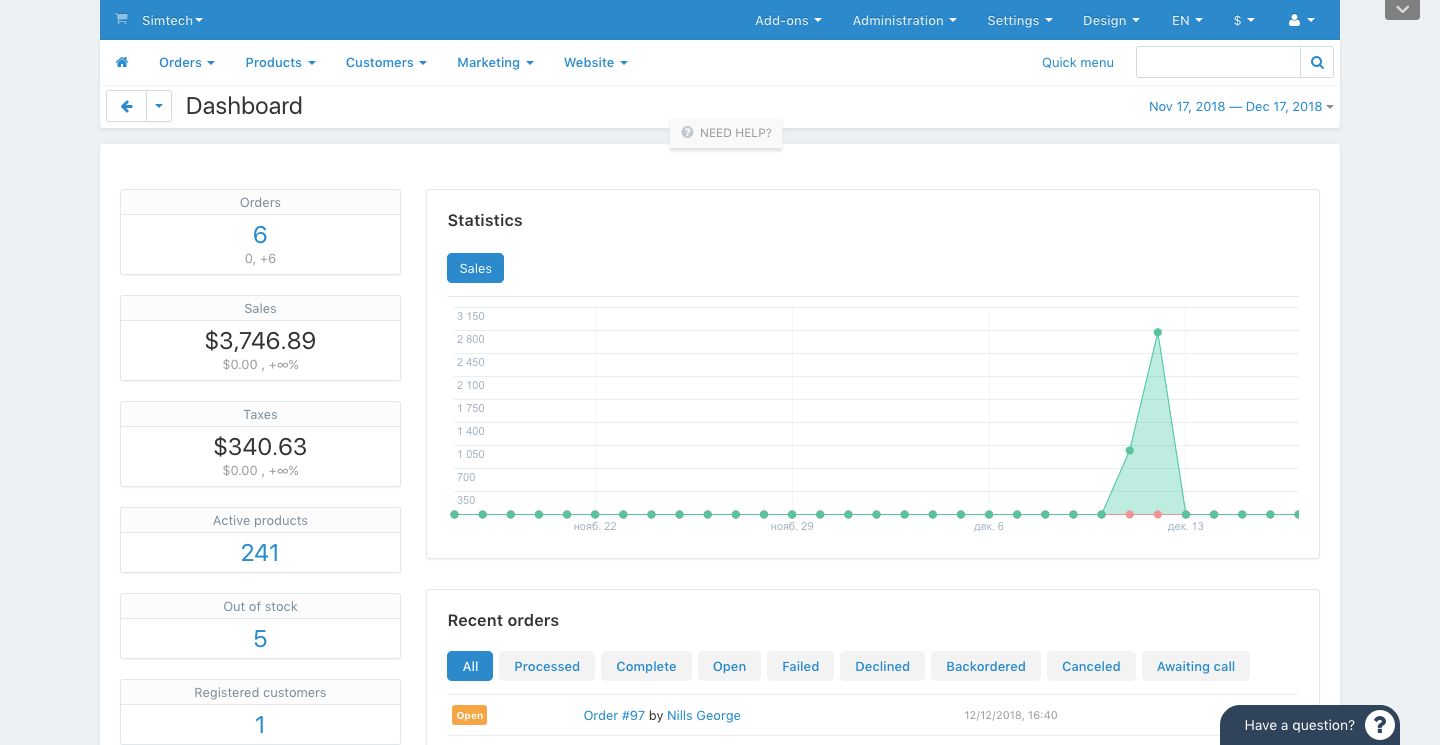 Great visibility on Google because the rich content provided in this software.

Once you learn all that this software can do you will be very pleased. CS-Cart has provided so many how-to vids to help you along.

Very little to say negative because they've been so much better in the communication with me. This software was created in Russia and the time difference can be a little difficult at times. I will say in the past year I never wait for more than 24 hrs for a response.

Easy to use eCommerce software, value for money and good technical support.

I have tried other eCommerce programs, but none compare to CS Cart for ease of use, value for money and support. Excellent.

CS Cart is very straight forward to use, and offers a plethora of features to sell products on the web. We were able to integrate it into our bespoke stock control system so that stock levels online were synced. The product entry scheme is very detailed . You can tailor the features to suit the requirements of the items that are listed. You can combine products, or list matching products. Products are organised into categories on the website, and this process also offers many possiblities to make things easier for site visitors. The administration panels has a promotions section to tailor offers on specific products at specific times, so you can plan your marketing ahead of time. You can also do promotions to your existing customers, or types of customers. The administration panel allows you to design you pages. The format is based on blocks and banners, and is really easy to configure. CS Cart also allows you to offer more than one payment provider so your customers have a choice. There is a SEO section to help you get to the top of the rankings. There is a comprehensive set of reports for dealing with orders when they come flooding in. Each report can be configured with you company logo, and you can keep your customers updated with emailed reports Simple! If all these details are not enough, then you can access the thriving community of add on developers who have added even more functionality to the core program. What is not to like. Finally, if you are like me and not too confident on the technical side, then CS Cart has a great customer support section. Polite, prompt and very very helpful if you are in trouble. They don't make you feel stupid, they explain and fix the problem quickly.

I would like to see more features on the mobile site. The numbers accessing my site by phone is increasing quickly, and I would like to offer more options for these customers,

I wish we would've gone magento!

Most of our problems with CS-Cart revolve around their failed update system, or system breaking updates, bad internal policies, and poor customer support. When it comes to using the software, it serves its purpose mostly, for transactional use, but at least on the version we got stuck at, forget about REPORTS! The reports system is so unwieldy you can't get any useful data from it at all. We've had to develop custom addons to generate good reports as our customers truly despise cs-carts built-in reports system. In fact, we've had to develop a lot of different plugins just to compensate for the lack in natural functionality of cs-cart (again, at least for the version we got stuck at due to their failing update routines). We are already redeveloping our 8 years of add-ons (as needed) in magento as our customers have had it with cs-cart (and frankly, our developers as well). So we've lost our butts here, I wish Magento was in a better position 9 years ago when we had to make a decision on modern ecommerce software package as our base. Save yourself the headache, choose another software, gotta be plenty of better options!

The software has pretty good hooks, and is written in a standard enough way that any developer can modify it with addons to your needs. But thats about the only praise I can muster.

* Their update routine is downright awful. We have 4 different shops using this software, all of which got stuck on old versions due to their update routine failing without error message. Their support refuses to assist without ACCESS to the server, which by contract we cannot give. We're professionals, they can easily give us troubleshooting tips to help guide us toward fixing their mess, but nope, nothing. Bare in mind, 4 different servers, with different configurations. * Their support is slow to response, and often responds with very unuseful comments, so each time back and forth takes way too long when your shop is in peril. * Their refund policies (which is to say, there are no refunds) are nothing short of thievery. While we paid to upgrade licenses, we never got the upgrades due to the failure of the software to complete the update. They refuse to refund when they also refused to offer support beyond "give us your server logins". Very unethical companyn! * The software is prone to hackers with not very proactive effort on cs-cart's part. They react to the problem, and to their credit, at least they offer a way to PATCH with instructions as opposed to ONLY their update routine. We would've been forced out of their software long ago if they didn't do this, so we are grateful for the patch and disclosure on the security problems they do discover (but again, its after their customers were hacked, they should be doing proactive S&D)

After using many carts CS Cart became the final destination, 10 years and running!

CS Cart rocks! You don't need anything else

Firstly, value for money. As a small business owner we needed functionality within a reasonable price point. CS Cart was the most viable option with the right mixture of features and purchase price. Also not a subscription based cart which gives us ownership and the much needed flexibility. Then the functionality.... where to start! The layout, both back and front end, are so smooth and very user friendly. Built-in themes are suitable for most users I'm sure, but there are also developers who make exceptional themes. The site is also mobile friendly and adapts well to mobile screens. Then the back-end options are really flexible, we could customise our country options, which is great not being in a majour country. Drag and drop customising of pages makes it so easy to setup pages with no experience. The script is responsive and not as many bugs as I've seen in other cart software. Easy integration with Paypal (which is what we use) or so many others I see available for processing in the built-in list. And the customer support !!!!!!!!!!!!! THE ABSOLUTE BEST!!!! Super fast and responsive. I try to model our support after seeing theirs. That makes owning this software feel even more secure, that rock solid support that there when you need it. Even for their support alone, cs cart is worth it. They customised the script to meet our needs. 11 stars for support. Added on to support is their extensive knowledge base documentation...which is all I need to refer to for most issues. Detailed and relevant, like an encyclopedia All in all I'd definitely recommend the company and the product!

Not many or majour at all. Mostly they focus on developing the core product, but not on the little things that sometimes make a big difference, then the developers make an add-on for it and you got to buy it. For eg. a button to scroll to the top of the page, or make the checkout page a single screen. It would be great to dedicate some time to these smaller elements as well. And then we sell alot of services (document print & copy centre), and the software isn't as friendly to setup for selling services as it is to selling physical products. So we had to get creative in making the product page layout more to what we'd prefer.

The best eshop platform with ease of use!

This is a great and secure platform with great support in an affordable price.

CsCart is very easy to install and easy to use. We have been using the product for more than 10 years now and we have no problems with it. Our customers also like the admin section which is actually way more easy to use than other open source platforms. We have ask them how they feel about the latest version of cscart and they just love how friendly it really is. It has a lot of options to customise it any way you want. You can also customize the look of it by altering the theme/skin of the platform very easily. It has a lot of good addons and it provides language addition with the click of a button. It is definitely the best multilingual option out there. Support is also exceptional. Any issue we ever had it was solved within 24 hours and all help was very detailed and prompt. Most importantly the software is very secure. We had issues with open source platforms before which require a lot of upgrades almost every month. CsCart is very serious about security upgrades and we get notified every time there is and issue given all appropriate directions on how to patch and just secure the platform. If you need a security patch the cscart team is sending out an email notice with a patch addon which you can install with just one click without having to alter code. This is very convenient if a user/developer or owner has many platforms installed. Overall this is an exceptional product which we would recommend to anyone is looking for an affordable eshop platform with lots of options, addons and great support.

There is room for improvement in the layout configuration section but so far we have no complain about configuring cscart.