CCHIT Certification May Be History, but There Are Other Options for Evaluating EHRs

For 10 years, the Certification Commission for Health Information Technology (CCHIT) was one of the leading sources for testing and certifying electronic health records (EHR) software.

But since it ceased operations in 2014, medical practices have had to seek out new resources to evaluate EHR systems.

Fortunately, a number of independent bodies have formed to continue the job of assessing medical software.

These organizations are designed to help practices figure out which EHRs meet their individual needs while also meeting the standards required by the U.S. Department of Health.

Before discussing the new sources that have taken the CCHIT’s place, however, it’s important to note what made that particular group such a valuable reference for exploring EHR options.

In this article, we’ll answer the following questions:

What Was the CCHIT?

The organization was founded after the head of the Office of the National Coordinator for Health Information Technology (ONC), Dr. David Brailer, called upon the private sector to produce an independent, nonprofit group to test and certify EHR systems.

So, volunteers teamed up to create a detailed set of criteria for EHR programs.

This criteria was designed to help medical professionals simplify and standardize the process of evaluating EHR software. A year after it was formed, the CCHIT became one of six Authorized Testing and Certification Bodies officially recognized by the ONC.

How Did the CCHIT Certify EHRs?

The CCHIT ran a number of different certification programs designed to test software on various sets of standards, but every EHR system had to pass three major checkpoints in order to earn CCHIT Certification: functionality, interoperability and security.

Functionality covered a program’s ability to generate records for every patient and manage those records to control workflow. There were over 300 criteria for functionality, but basically, this category tested how efficiently an EHR system could do its job.

Interoperability, simply stated, is a program’s ability to communicate information with other software. Different medical practices must be able to send and receive date to and from other offices in order to see the whole picture of a patient’s medical standing.

The CCHIT tested EHR interoperability on a little over twenty standards, including a program’s potential capacity to support new methods of information exchange.

Security may seem like the most straight-forward of these three categories, but with the Health Insurance Portability and Accountability Act (HIPPA) laws and cyber threats to individuals’ identities, it is certainly no less important.

The CCHIT looked at about fifty different standards to determine a system’s level of security, and an EHR program had to pass every single one in order to earn its certification.

After earning CCHIT Certification, program developers could advertise that their EHR software was approved by the CCHIT as well as the ONC. Medical professionals could also check the Certified Health IT Product List to see which EHR programs had passed the requirements.

When asked which of these areas he considers most important, registered nurse S. Abel of Las Vegas, NV says, “For me, having access to my patients’ detailed medical histories is imperative, and electronic record keeping makes searching through that information and finding what I need to know so much more efficient than paper charts.”

Why Was CCHIT Certification Helpful?

One of the reasons the CCHIT Certification program became such a valuable resource for both the Department of Health and medical practices alike had to do with the way it established its standards.

The CCHIT polled real medical professionals to determine which features would be most valuable to EHR users. In this way, the CCHIT managed to shape the landscape so that health IT developers would focus on practical solutions to help make life easier for the people using their software.

In addition, the CCHIT was known for its experts’ attention to detail. Once an EHR program earned its CCHIT Certification, medical practices could count on that software to offer integrated functionality, interoperability and advanced security.

After that, it was up to individual medical professionals to prioritize the remaining factors and select an EHR system based on the features that were important to their practices.

One ophthalmologist we spoke with, Dr. Kent Kebert of Kebert Eye Clinic in Mississippi, said he considered “cost, user reviews, and the choice between a private server or a cloud-based system” when shopping for his practice’s EHR system in 2014.

Dr. Kebert also advised other practices to focus on the elements that would be most important to their chosen specialty.

For example, as an optometry practice, image sharing is an integral part of Dr. Kebert’s day to day operations. As a result, he chose his current system in large part because of its ability to store, share, receive and read high-quality images.

What Happened to the CCHIT?

In 2009, the American Recovery and Reinvestment Act was passed in an effort to help reinvigorate the U.S. economy.

According to the new law, financial incentives would now be offered to health IT manufacturers, vendors, and practices if their EHR software met a certain standard, dubbed “meaningful use” in the bill.

According to the ONC website, the meaningful use program is meant to accomplish four overarching goals:

Since its introduction in the 2009 legislation, there have been three stages of meaningful use objectives:

Stages of Meaningful Use Objectives 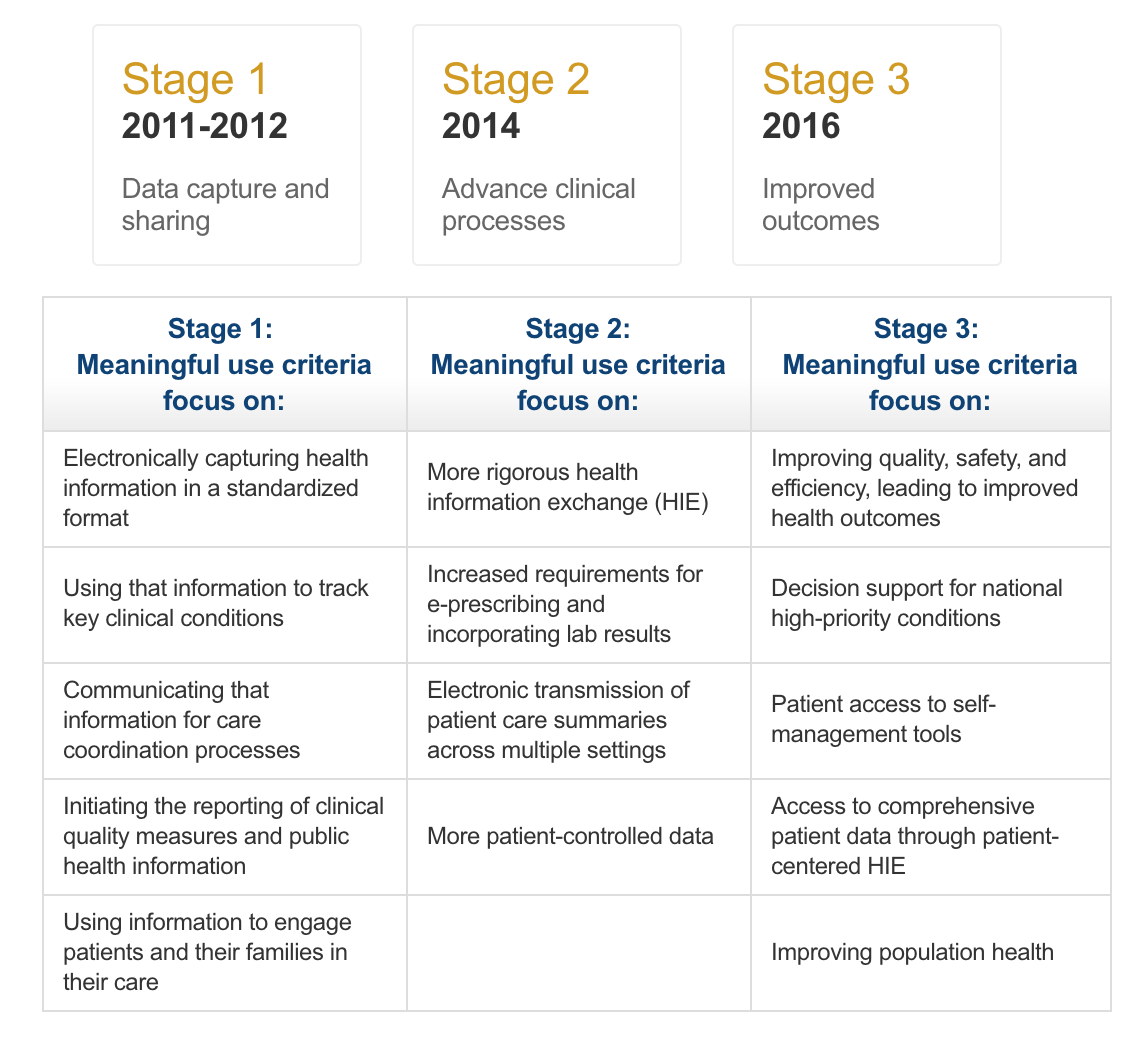 By 2009, CCHIT-certified programs comprised over 75 percent of those available on the market.

However, with the institution of meaningful-use criteria and the strain this new set of standards placed on workflow and testing timelines, the CCHIT was no longer able to keep pace with the number of incoming applications for certification.

Additionally, changing deadlines for the adoption of Stages 2 and 3 of meaningful use criteria made it increasingly difficult for the CCHIT to function as a business.

Former CCHIT Executive Director Alisa Ray explained that, while pushing back deadlines worked in favor of policy-makers and software developers, it created a six-month delay in revenue for the CCHIT.

The fluid timeline also interfered with the organization’s ability to hire new employees and train them in operating and testing according to the new meaningful-use criteria.

In January of 2014, the CCHIT announced it would no longer certify EHR software. Ten months later, the organization closed its doors.

What Are Some Alternative Sources to the CCHIT?

Although the CCHIT certification program has gone the way of the dodo, medical professionals still have a number of resources available for comparing EHR software. Among these sources are both ONC certified organizations and independent groups.

Another group, SLI Compliance, has been certified as an ONC-ATL, but does not have the power to officially certify EHR software systems.

Where government-certified entities cover all the bases for stimulus-related qualifications, e.g., meaningful use criteria, medical practices may look to more accessible organizations for user-based feedback on EHR programs.

Software Advice’s FrontRunners Quadrant for EHRs is a great place to start, as it takes a number of practical factors into consideration to determine which EHR systems stand out in the market.

Among these factors are end-user ratings and performance-based scores, both calculated in relation to other EHR programs. These reviews and scores are then charted to determine a product’s capability as well as its value.

Where Do I Start Researching EHR Software Now?

With hundreds of EHR systems on the market right now, you may have realized that finding the right software to fit your practice’s needs is no small task. That’s why there are step-by-step guides, like this one offered by the ONC, to help you get organized.

You can also reach out to our professionals by calling (855) 998-8505 for a free phone consultation or by filling out this survey.

In fifteen minutes, our advisors can pull a tailored list of products from our databases customized to fit your budget and requirements so that you can make upgrading or implementing your new EHR system as seamless as possible. 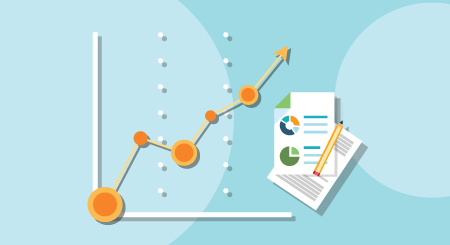 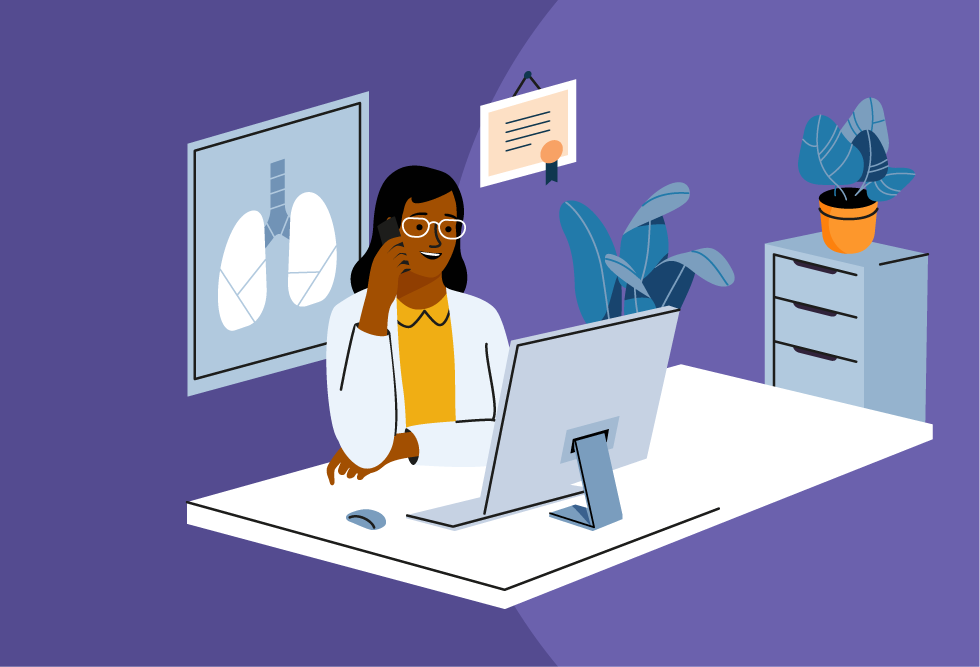 New Medical Practice Checklist: How To Get Started