Determining the best actions to prolong the lifespan of an asset takes a great deal of knowledge about how specific assets fail. In some cases, problems don’t always reveal a clear cause.

Having software and best practices in place can help identify how and when assets fail.

From Software Advice’s daily conversations with maintenance software buyers, we found that 86 percent specifically ask for preventive maintenance functionality to maintain equipment; 75 percent of those are maintenance managers.

These maintenance professionals need a way to visualize the deterioration process of machines, and a P-F curve is a useful tool to do just that.

We spoke with an asset management expert to explain the P-F curve, and how it can help maintenance managers improve preventive maintenance, understand risk and maximize asset lifespans.

What Is a P-F Curve?

Let’s start by breaking down the curve: 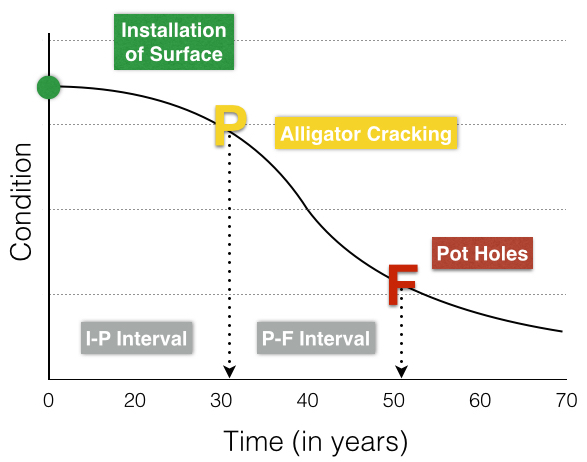 Example of a standard P-F curve

In the image above, the curved line represents the condition of the asset over time, with maintenance events along the path and two key intervals.

In a LinkedIn post written by Albrice, he offers a clear example of the impact of deterioration on a common road surface.

“There’s a very simple example; you walk on a roadway with cracks and that probably won’t cause a slip, trip or fall,” he says. “But as it keeps degrading and you go further down that curve, you’ll get to a point where that roadway is no longer safe.”

And in the P-F curve example below, we can see that the first alligator cracks (potential failure) show up about 30 years after installation. About 20 years later, potholes (functional failure) begin to form. 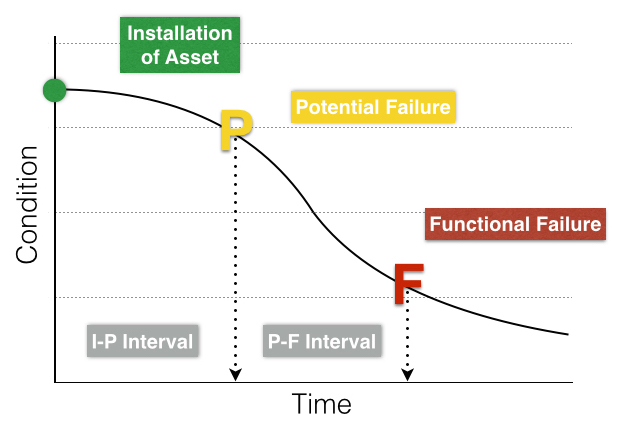 Example of a P-F curve for a road surface

The lifecycles of different assets can vary greatly, so it’s important to have a strong sense of how each type of asset in your organization can fail, Albrice says.

“A roadway may degrade from a perfect condition to slight cracking to potholes over a 50 year period, whereas another asset may degrade over a one-year or five-year period,” he says.

“So it’s important to understand the profile of each asset because they each have different qualities.”

Next, we’ll take a look at some tips on how to make the most of the P-F curve.

Ways to Use the P-F Curve

The P-F curve simply visualizes the deterioration of an asset. Maintenance professionals must have historical knowledge of the ways assets can fail to glean useful information from it.

The P-F curve can be used to aid in a few important maintenance processes, such as:

Understanding the severity of risk along the asset lifecycle. This same knowledge about an asset can help reveal levels of risk throughout the lifecycle. If you know the time when a potential failure and a functional failure occur for an asset, you can identify the risk severity on the P-F curve. 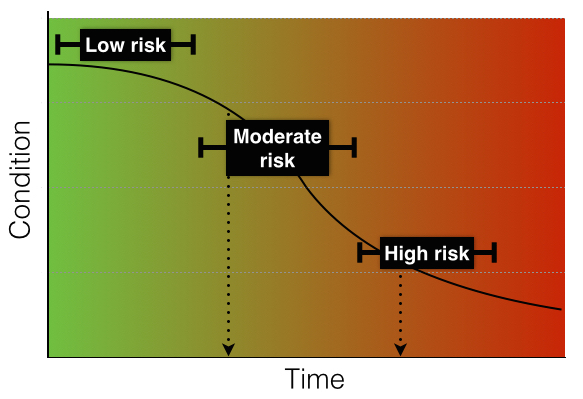 Example of risk severity on a P-F curve

This helps you schedule preventive maintenance tasks more often when the risk is high.

Maximizing the life of an asset by replacing it just before a functional failure. A maintenance manager should extend the functional life of an asset as long as possible. A P-F curve can show you the best time to replace a machine that offers the most functional output before investing in a new machine.

A few types of indicators, Albrice says, can signal that a potential or functional failure has occurred or is about to occur. These indicators can inform the decision about when to replace an asset.

“There can be telltale signs of something starting to happen,” he says. “It may be a little dark spot appears on something and it looks like an aesthetic blemish, but it’s belying something deeper that’s slowly forming.”

These indicators will vary greatly from asset to asset, so again, the knowledge of your particular assets is critical.

If your organization has hundreds or thousands of different assets, Albrice suggests performing a criticality assessment on your asset portfolio to decide which you should watch closely.

However, that determination depends on the overall goals of the company.

“It’s a big concept, but I think the principles of asset management go back to what the organization is trying to do.”

The P-F curve is a useful visual tool that helps maintenance teams make important decisions on how and when to address asset problems.

As with any maintenance process, it is greatly enhanced by knowledge of how assets operate normally and how they can fail.