RingCentral Engage Voice is best for:

Great value for money
Great ease of use
Great functionality

RingCentral's predictive dialer makes missed calls and ones that go directly to voicemail a thing of the past. Reduce agent downtime and time between calls, so your agents spend more time making valuable customer connections and converting leads. Make your contact center more efficient and effective with RingCentral's auto dialer and maximize your agent's productivity. Set your agents up to deliver a better customer experience, save money and t... 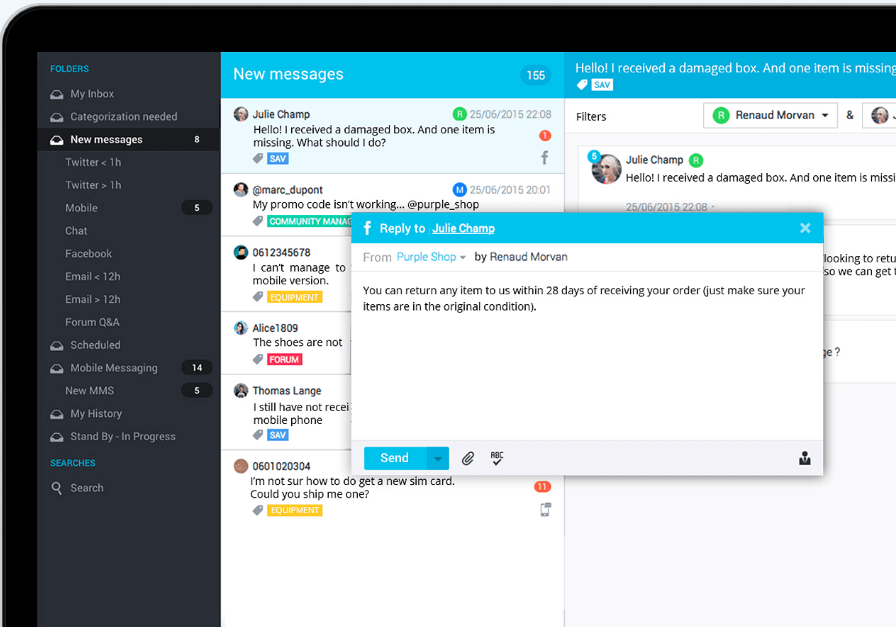 How much doesRingCentral Engage Voice cost?

Top RingCentral Engage Voice features and user ratings for each are:

RingCentral Engage Voice does not offer:

My overall experience with RingCentral Engage Voice has been great.

I loved most about RingCentral Engage Voice is how easy it has made it to collaborate with my team.

I don't have any negative feed back from our customers and it's overall great.

A dashboard for monitoring and follow-up agents could be better.

To increase the performance and productivity of our teams.

Review Source: Capterra
This reviewer was invited by us to submit an honest review and offered a nominal incentive as a thank you.

At first, I did like using RingCentral but in the long term, the company was not keeping up with the times and made bad business decisions. I got Ringcentral for only a few features, the app for Voice and Unlimited Text, and got more that I did not need and eventually got one of the main features taken from me before the contract was up. That left a bad taste in my mouth.

The ease of use of Ringcentral is smooth, especially for people who are not tech-savvy. I did enjoy having the feature of using my personal phone and having a separate app for my business line. They do offer the Desktop version and app for the use of the computer, which can be helpful.

I had a lot of issues with this software but mostly with customer service. It was more frequently to bad long customer service experience instead of good. The average time was easily 45 mins to one hour. I felt like any issue I had I was being bounced around different departments of trying to solve the issue and it felt like the representatives did not know the software very well. The only department that know their product was sales. The desktop version felt dated and could utilize new features. The user's interface was not friendly to bulk texting, so you had to only personally text per account. When you had to bulk you can only do it with 10 contacts at a time and you would have to input it by name versus seeing a list of contacts. The organization of the contacts, again very dated not efficient. You could not tag the account and make it a simple search. It had a lot of features that I did not find useful for my needs, video conferencing, automated scheduling through text, and their version of chat. Since I own a storefront, I did not need video conferencing and when clients would text about appointments RingCentral would automatically make a reminder and remind me of it for a video conference. I liked the automatic but not the video conference. Ringcentral has its own chat service and I did not need or want this feature. In the beginning, it was confusing what was text service or the Ringcentral chat. Since RingCentral is not known to the public it was pointless.

I was considering using my old iPhone and connecting it with my cell phone provider but found it more cost-effective and useful to use RingCentral at the time.

The main reason I left Ringcentral was they change their service from unlimited texting to limited texting, without the option to keep unlimited. That was a terrible business move to cut off the unlimited texting, and I was bounded by contract to stick it through, but I found another service. With more research, I found some features that would help my business that are dealbreakers and since RingCentral couldn't keep up, I did not want to stick around.