(20)
Overview
Reviews
Alternatives
Projul is everything you need in a construction management tool. Built by construction pros. With honest pricing. • Consolidate your systems into one spot • Save 7+ hours a week per employee • Close 15% more jobs • Instead of paying for storage, enjoy unlimited projects, customers, and contractors Projul is the trusted tool construction companies use to do more with less. ...

We've got simple and transparent pricing. No contracts, and you never pay for more than you need. We offer all current and future Projul features in all of our pricing plans. 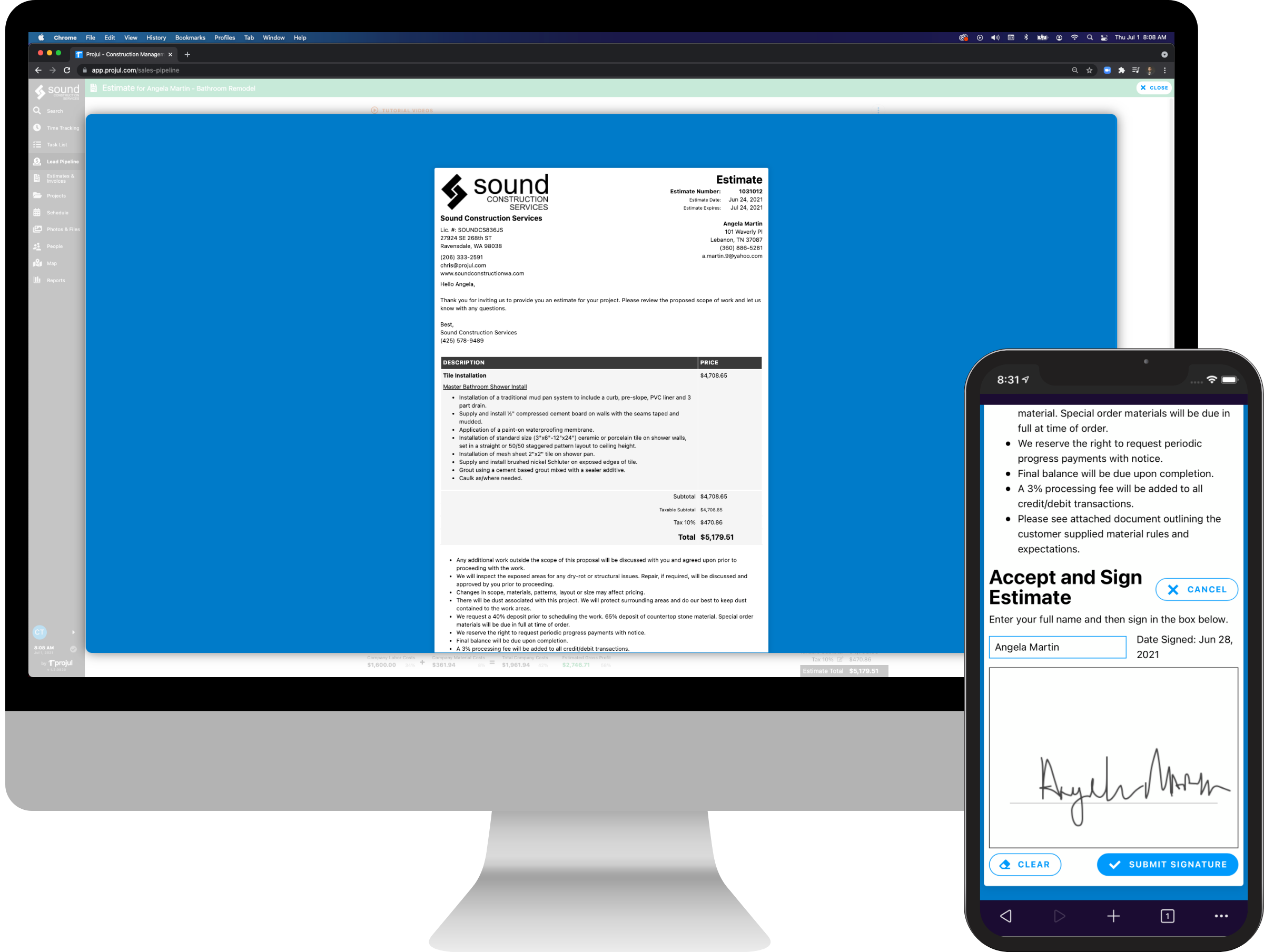 Works great to easily track leads, set reminders for follow-ups and schedule meetings with clients. Notifications help remind me when a task is due. Reports help me get a better understanding of where new business is coming from.

Could use more reports. Also waiting on estimates and invoices. Describe your overall experience: I've noticed a substantial improvement to my daily routine since I've started using Projul. With the software managing my tasks, it's easy for me to stay on task and has freed me up to get more work done. These wins absolutely justify the price of the software.

Reece, it's great having you as a customer and we love hearing how Projul is improving your daily routine!

Almost exactly what we needed, and better than any of the alternatives

We're 100% sold on the system; already, just in a couple of weeks, we've seen increased productivity and less phone calls to management asking "where is this?" or "what are we doing here?" The system was easy to set up and onboard management, and every time be bring another section on board, we find more and more benefits of the system working to support each stage of a project - even if its just keeping all the information in one place instead of spread to the four corners of the earth (e.g. pictures taken during estimating are still easy to find and attached to the project when you're in the project execution phase of things.)

Projul has allowed us to take a home-brew system designed using three or four different solutions (one for time tracking, one for estimating/bidding, one for project management, and one for document management) and bring them all under one roof. The system is exceptionally well designed and the most intuitive we've used so far; the emphasis of the program is from a residential subcontractor/general contractor viewpoint, but was easy to adapt to for commercial subcontractor usage, with more tools for commercial subs on the way. Its obvious that this company was run by former residential subcontractors (and eventual general contractors) in the way that almost everything we've wanted has just been built in while also working in a way that is very complementary for each step of the construction project lifecycle, from leads, to estimates, to project implementation, to payment.

While the software is the most intuitive to use of all the solutions we've tried, I can't say that it was instantly intuitive like an iPad is with a four year-old; you do have to learn how to do things in their easy, but specific, manner. While most of our employees who are less tech savvy are able to pick it up, it wasn't always easy to get them to understand the workflow and how the tools worked, at least initially. However, the training offered and high-contact support (they actually answer the phone and respond to emails, for example)has made what few issues we *have* had so much easier to get through when compared to their competitors which we used for months prior to finding Projul.

Reasons for switching to Projul

Its a long story, but Monday.com essentially sold us on the idea that we could build these amazing dynamic systems that would help us manager our projects - and while we were able to use simple spreadsheets to do this, we honestly could have done the same thing in a Google Sheet for less money and similar results. When we tried to get help with doing more robust options, their solution was to tell us to hire a third-party company to "design our workspace" for us instead of trying to actually solve the issue we were having. The support also was dreadful, in that you would get a response immediately, but never from the same person - and at least in our experience, the support that was given would often be cursory and without any knowledge of the prior conversations that had taken place prior to that specific support person chiming in.

Hey Alan, WOW! Thank you for the incredibly detailed review. We've printed this review and hung it in our office for everyone to see. What you have described as "Pros" is exactly what our we're setting out to achieve; being the "all-in-one" construction management software for small to medium sized businesses. I'm happy to report that we do have immediate plans for a bit more of an intuitive experience that shouldn't rely quite as heavily on training and support, but we will, of course, continue to offer that same training and support at no additional cost! We truly appreciate you as a customer - May 2021 be your most profitable year yet!

So hard to navigfor new users and little help

So I got the software but could do a thing and when I told them instead of helping me they returned my money . It's looks great and is up to date vs other software but man good luck navigating it. I have high PC skills so for me not to be able to use the software says something

Up to date great display design on the app

Didn't went with contractor Forman which was 100 a month more

Just what I needed.. SIMPLE!

It's not just that I though Projul was easy to use, I mean choosing software you want to use is easy. The big win here was with our associates which loved the Projul mobile app right from the beginning. I've never put anything in their hand before that they said "saved them time and made their job easier". They open their daily schedule and just click on their daily tasks. The app maps their route to appointments and tracks our teams communications about the job, the location, problems, etc... The entire team knows what's happening.

The BEST thing about Projul is how simple it was to set up and start seeing changes. In the first week I booked 25% more consultations as a result Projul’s Sales Pipeline. Seriously this is something I've been trying to do for the last two years!

I’m interest in being able to track my costs, it looks like a feature that is coming so I’ll have to continue to track my jobs costing manually for now.

I looked at a number of other "CRM" type programs or tools but honestly got lost in the complexity of most of them. I liked the HubSpot free CRM but I'm scared how much my contacts would cost me.

Hey Jennifer, you are a slice of awesome. Thanks for using Projul!

A great solution for my small business. It can grow as I grow. and the learning curve is short.

I come from a sales background and recently started my contracting business. I understand that everything has a cost and appropriate selling price. Projul allowed me to get a better handle on my costs and improve my profit margin. I discovered quickly that I had been under-bidding all of my jobs. The job costing feature allows you to reset the cost on items post job and it saves that cost for the next job! the templates for materials and services are editable. which is not the case with other software I've tried. Customer service is excellent. It's a small team and you get to talk to the developers. They can help with any issue you have. I also like that the team that developed the program were in the construction industry. so they have added features that they know contractors need.

Removing dead estimates and leads is not intuitive. still haven't figured it out. you cannot download estimates/docs only has a print to function.

Reasons for switching to Projul

Jobber did not have much of the functionality I needed. It seems to be more built for recurring services like landscaping. Not home renovation contracting.

Hey Ryan, thanks for your feedback! We are incredibly pleased to be of assistance in your journey to high profit margins! We have some big things in the works for even better materials management as well as estimates and lead management in the near future - excited for you to see what we've been up to behind the scenes!