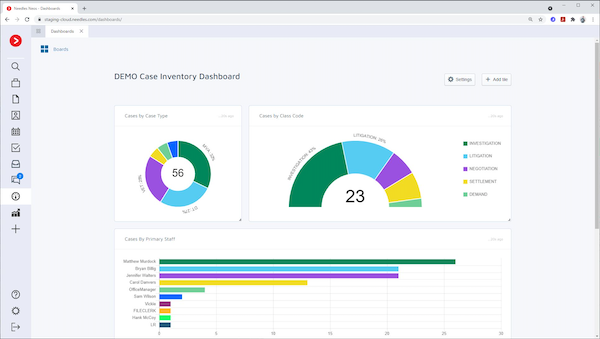 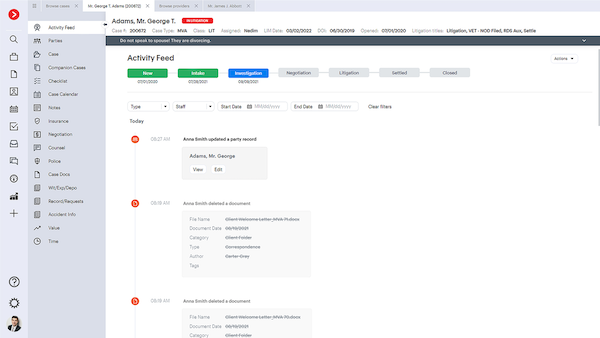 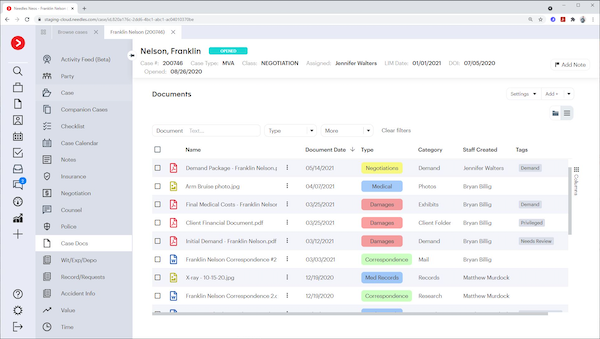 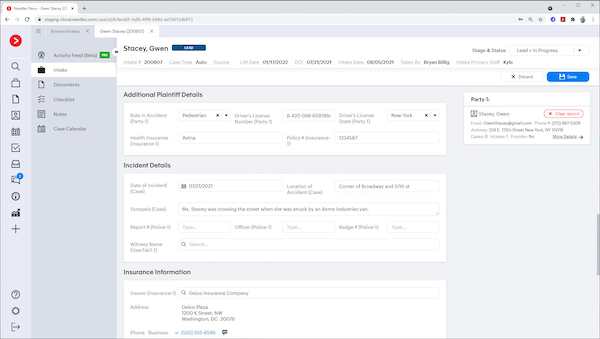 Gain real-time visibility into your firm's performance with dashboards & subscriptions

Easy to use and a great way to store information

Easy to use with different tabs devoted to different aspects of each case. Great organization of documents and information.

No real drawbacks to this software. It's functional and dependable.

Thank you for your 5-star review. We appreciate you sharing your rating with us and the community. - The Neos Team

Overall it took three days to convert our files into Needles Neos and once up-there are a totally learning gap on how to move through the system-where files were and how to even open from online, etc. Once that learning curve was ventured, then it was easier to move through it, however, there were more steps. . the help section and webinars are great tools and they have up-ed their game on that. .

There are a lot more steps that have to be done and we were not taught how to access sharepoint (had no idea where our files were) and how to get a file from Sharepoint to attach to your email. . when you are in Sharepoint-Case File-you can't search like you can in Needles-have to write the whole word out, etc.

Leslie - We are glad to know that you are enjoying the Cloud experience and the ability to access it from anywhere. Thank you for the feedback regarding the number of steps and access to SharePoint. We are here to help - please contact our support desk and we will be sure to provide and required training or configurations. - The Neos Team

The calendar can be misleading at times.

Neos, PINS, Needles are all user friendly. Now with the cloud I simply love it even more! I use the calendar, documents, value, insurance, and note screens the most. Our Neo's Team is awesome everything we need at our fingers Thanks Team [SENSITIVE CONTENT] & [SENSITIVE CONTENT]for making it easy!

Sometimes I do not get all my messages the same day.

Jaynie - Thank you for your 4-star rating and 10 of 10 recommendation. We truly appreciate your feedback around the calendar and have shared it with the product group. Thank you for being a valued customer. - The Neos Team

Implementation was not great, and I was not migrating ANY data. I still do not believe I have everything I was supposed to get. I paid $1,000.00 to do the work during my onboarding that could have been done prior to my implementation. Because Neos requires 365, during onboarding you will get to make all your Microsoft 365 and Neos connections. I assume I paid $1,000 for someone to tell me how to make the connections and 3 hours of training? Not sure. I also was not told about a bug that Neos had which prevented data from being updated and saved more than once during my implementation. I did my implementation on a Friday, and attempted to input my cases into the system on the following Saturday and could not get anything to save. I was told the following Monday about the issue, was told it was a known issue, and would be resolved in a day or so. I spent all day Saturday trying to figure out what I was doing wrong for nothing. It was ultimately fixed. But just a frustrating experience. Everyone has been genuinely nice and understanding, the limitations of the software is where my issues really are.

Neos is customizable, which is nice. You can add whatever field you want to add to any tab. It allows you to collect and input whatever data you want and you are not nearly as constrained as you are with Trial Works in terms of customization. It has a nice display. Grouping contacts is easy. Apparently, there are a bunch of reports you can use.

Functionality is not there. Commonsense things are missing from this platform. The system relies on and appears to be limited by Microsoft 365, which itself can be spotty. Neos is just Microsoft 365 apps all tied together, under a sleek looking display, but adds almost nothing to the 365-experience. 90% of the Neos platform is bundling all-things 365 together through a sleek looking display. The other 10% that you would expect Neos to have incorporated and built-in is missing. Templates have to be saved and then generated to be tested. You have to constantly change in and out of various tabs when creating a template to get your bookmarks. Good luck finding bookmarks for pronouns. I was told by Neos I should consider writing gender neutral. Ultimately, found out that I could code an if than statement in Needles should I want to use pronouns. Each bookmark in Neos will eat up a line or two of your template, which makes for errors. You can calendar within Neos, but you can't invite clients or "providers" or anyone outside your firm within Neos' calendaring feature, so it's an useless feature and users will need to rely Outlook. If you generate an email within Neos, by clicking an email link within a case, it is not saved unless you tag it in Neos. If you email a document from a case in Neos it does not prompt you with the various case contacts associated with your case so you must click through various tabs in your case file to get the email address(es) you need.

I opened a law firm. The firm I came from used Trial Works, which is a clunkier, more expensive, but as I have come to find, a way better case management platform than Neos. I was an Admin at my previous firm and KNOW Trial Works. However, in making my decision of software, I was being cheap and was sold on, “Neos is the best of Needles and Trial Works put into a single platform.” It is EMPHATICALLY not. I was told that if Neos makes template creation so much easier than Trial Works, it does not. I went with Neos and should have either paid the money for Trial Works or looked elsewhere. Ultimately, if Trial Works is a 5-star case management system, Neos is a 2-star system.

Michael, thank you for your candid review. We understand as a user of our desktop product, TrialWorks, your transition has involved additional modifications in converting to a web-based platform. We appreciate the opportunity to listen to the voice of our customers and share your personal experience with our Product Management team. Neos continues to evolve, adding new features monthly. We look forward to the opportunity to continue to work with you.

If you use Needles it is the best choice.

The merge from Needles was easy and painless. It is intuitive and easy to use.

The intake pro needs to improve the reports. The reports are not as easy to run as they were in Needles.

See the answer above. Also, the price for NEOS is less than other products.

Reasons for switching to Needles Neos

Karl - Thank you for your 10 out of 10 recommendation. We appreciate your feedback and are always looking to improve Neos. We'd love to hear how we can improve the intake reports to make them easier to run. Our Product team will be reaching out to you directly. Thank you again for being a valued customer! - The Neos Team