How to Pinpoint Call-Quality Issues in Office Phone Systems

Call quality issues are a big problem for businesses. In fact, 79 percent of consumers have experienced poor voice quality when speaking with a business. “Stress” is the first word most used to describe their feelings about the call and “anger” is the second.

While callers today have a lower chance of encountering voice-quality issues than they did even a few years ago, problems still exist. Here, we’ll look at some basic troubleshooting steps to take when your business has call-quality problems—so you can keep your customers from feeling angry or stressed when they call.

Voice over Internet Protocol (VoIP)—the alternative to landline service which we’ll cover below—runs on computer networks. Unlike traditional phone calls, with VoIP, calls are broken into small packets of information. These packets are sent out over IP networks, each often finding its own route to the destination. The packets are reassembled at the destination to reproduce the original voice.

(If you’re new to VoIP, please take a look at our VoIP Buyer’s Guide.)

We’ll start by looking at VoIP’s three most common call-quality problems, echo, choppiness and delay. This illustration shows each problem and the network equipment which most often causes it.

Echoing is one of the most common problems and is often the easiest to fix.

People usually say the call is “breaking up” when they hear choppy audio.

Delay can be difficult to pinpoint and is in some cases inevitable.

Troubleshooting VoIP Problems in the Network

What makes a VoIP call much more difficult to troubleshoot is that problems are often caused by network activity, which changes throughout the day. And though there are tests that can indicate network deficiencies, these tests need to be run when the problem is actually occurring.

The best strategy is to contact your ISP or ITSP (Internet Telephony, or VoIP, Service Provider) at the first sign of a problem. Be prepared to go through the standard troubleshooting protocol, which will include restarting the modem and VoIP adapter or router. They will want to verify that the equipment is configured correctly—particularly, that the firewall is not interfering with voice traffic.

If the problem persists, then the service provider will likely ask that you perform some tests on the two network variables which most affect VoIP call quality, latency and jitter. These, along with packet loss, are the main variables by which network and connection quality are measured. They are defined as:

Latency: Latency is the amount of time it takes for packets to arrive, and it is measured in milliseconds (ms, meaning thousandths of a second). The maximum one-way latency (from one caller to the other) that can still allow for high-quality VoIP calls is around 150 ms. Latency is measured by doing a ping test.

Jitter: Jitter is the variation in the latency of arriving packets. Remember that packets often arrive having taken different routes, so some arrive more quickly than others. Jitter is measured by doing a traceroute test.

Packet loss: If some packets take too long to arrive, the others do not wait. The voice audio will be reassembled without the late or missing packets, resulting in packet loss.

These tests are relatively easy to perform, but the results can be difficult to interpret. (And remember, the tests must be run when the problem is actually occurring.) It’s a good idea to save the results of every test you perform to a text file. This record of test results is often the only proof you’ll have that the problem is the service provider’s responsibility to fix.

If your business makes and receives calls using regular landline telephone service, then quality issues will be relatively easy to pinpoint.

Troubleshooting a landline problem is akin to figuring out why a lamp in your home won’t turn on: check the switch, the outlet, the circuit breaker and the lightbulb, and typically, you’ll find the source of the problem. You can troubleshoot a landline problem with a similar step-by-step approach.

Start with this list of questions to help you narrow down the problem’s source:

Q: Is the problem persistent, or does it only happen on some calls?
A: If the problem only happens on some calls, then it’s likely coming from the other end. Landlines provide very solid service, but they’re only one half of the equation. If, for example, a customer is using VoIP to call a company’s normally-reliable landline number, it’s very likely the quality issues originate at the customer’s end.

Q: Are wireless headsets or handsets being used?
A: See if the problem goes away when you try using a wired handset. There’s a long list of devices that can interfere with wireless phones. It includes, but is not limited to: microwave ovens, fluorescent lights, WiFi networks and cell phones. If you’re experiencing interference from one of these devices, try relocating the device, selecting a different channel for the wireless phone or switching to a wired handset.

Q: Is the problem affecting all extensions in the building?
A: Ask around, or try plugging the phone into a different outlet to see if the problem goes away. If it does, then the wiring in (or to) the original outlet is likely the problem.

Phone wiring and outlet connections can degrade over time. They can also be damaged during installation or renovations. Lastly, phone wiring that runs alongside electrical wiring can pick up interference. It might require a trained technician to narrow down the culprit.

The Blame Game with Landlines 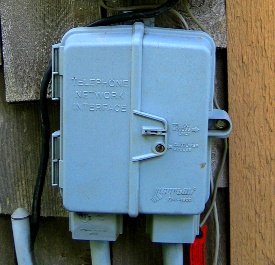 The NID (like the one pictured here, which can be found at many small businesses) is where responsibility for quality issues is determined. One side of the NID contains an ordinary phone jack that connects directly to the outside phone lines. If a phone connected to this internal jack reveals no connection or call-quality problems, then the problem is almost certainly within the building.

With most phone service contracts, problems within the building are the building owner’s responsibility to fix. If the problem exists on the line entering the NID, that is something the phone company itself would need to fix.

In either case, if the above measures have failed to turn up any obvious causes for poor quality connections, then a call to the phone service provider is in order.

The troubleshooting steps described above are useful for small and medium-sized businesses and others who may not have dedicated IT staff. But large companies run into call-quality problems, too—and they can be much more difficult to resolve. Here are a few useful tactics.

VoIP Monitoring Applications: There are many software applications designed to be run on-site or in the cloud that provide real-time analysis of VoIP call quality and network health. VoipMonitor, SevOne and VoIPSpear are three examples. VoIP monitoring applications often collect and analyze immense volumes of data around the clock in order to provide a clear and detailed picture of all aspects of a VoIP system.

One interesting metric used in addition to network analysis is the Mean Opinion Score, or MOS. MOS is the average of a group of subjective ratings listeners give to the quality of a call. The MOS scale goes from a perfect-quality call at five down to a one: a call with quality so poor it makes conversation impossible.

Codec: When a voice call is digitized and broken into packets, a special formula, or “codec,” is used. There is a wide variety of codecs and they’re differentiated by how much they compress the data. Some codecs are designed to preserve the high quality of the original audio, but they use more bandwidth. Other codecs are designed to use less bandwidth, but at the expense of audio quality.

If a company is continually pushing its bandwidth limits and call quality is suffering as a result, then switching to a more bandwidth-efficient codec is one possible solution. A more efficient codec allows more calls to be placed concurrently using the same amount of bandwidth. On simple phone systems, changing the codec only requires a change in settings. Larger systems might require some planning to ensure that the new codec will be compatible with every component in the system.

Poor audio quality can quickly turn an ordinary phone call into a frustrating, stressful experience. And that’s certainly not the kind of experience businesses want to be associated with. Though business owners are often unsure how to troubleshoot call-quality problems, following the steps outlined above will, in most cases, help pinpoint what’s causing them.

Buy or Build: Should You DIY Your Business Phone System? 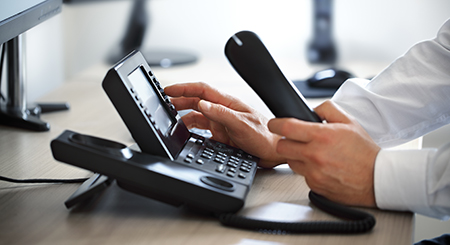 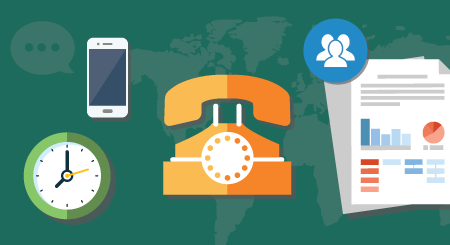